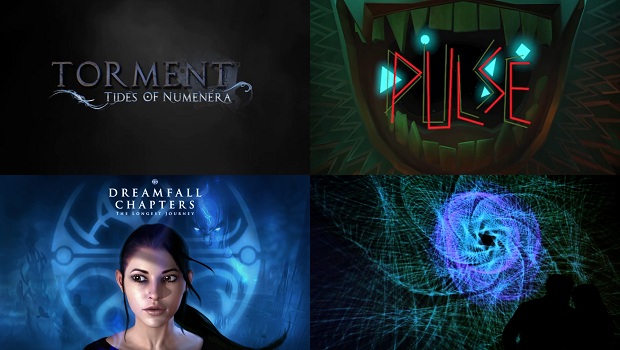 Tired from that hour of sleep daylight savings robbed from you overnight? Maybe this post will help Kickstart (heh) your Monday. This is another entry in the Kickin’ It saga, where we showcase games or gaming-related projects on Kickstarter that deserve special recognition in four distinct categories: Up and coming, a promising project on its way to funding, Underrated, a project with lots of potential but little funding, Updated, a previously funded Kickstarter with a recent progress update, and Unusual, a strange, interesting, or quirky project. Who’s kicking off this week? Torment: Tides of Numenera, Pulse, Dreamfall Chapters: The Longest Journey, and SoundSelf.

Up and Coming – Torment: Tides of Numenera

Chances are, you’ve already heard about the Kickstarter project for Torment. We mentioned it here earlier in the week, and its fast success has caught the attention of the rest of the gaming press as well. A successor to Planescape: Torment, the project blasted past its initial $900,000 goal within hours and surpassed $2 million within two days. It’s currently climbing its way towards $2.5 million with 25 days to go. It’s no wonder why, looking at the project page:

The game sounds great and it’s coming from inXile, a studio with a proven track record of success. Since Torment: Tides of Numenera has already breezed past its funding target, everyone who chips in now is contributing towards stretch goals; things like customizable gender, a deeper story line, and new areas have already been unlocked, with even more gameplay expansion lying in the wait. Want to help out? Visit the Tides of Numenera Kickstarter page here.

With much of today’s gaming experience so focused on graphics, it’s surprising when you find a game that focuses on sound instead. But that’s just what Pulse, a new project from Team Pixel Pi, proposes. Pulse is a first person survival game in which gamers take on blindness and are reliant on a mechanic similar to echolocation to reconstruct a mental picture of their environment. By requiring players to rely upon their hearing and other sense, Pulse is supposed to create a really immersive experience.

In this synesthesia-like experience, your world will shift and become clearer based on the information provided by your senses. There is often a distinct difference between what you “see” versus what is actually there. Let your senses guide you.

With over a month to go in Pulse’s Kickstarter, they’ve raised about 20% of their $75,000 goal. Head over to their Kickstarter page here to join in the fun.

Although Dreamfall Chapters: The Longest Journey hit is funding goal quite sometime ago, the Kickstarter campaign didn’t officially conclude until yesterday. In addition to funding the game itself, backers also netted themselves a plethora of stretch goals including Mac and Linux versions, French and German translations, additional game content, a graphic novel, commentary, and lots more. In total, 21,828 backers contributed in excess of $1.5 million in the hopes of seeing this game succeed.

With the money business taken care of, Red Thread can now focus on getting the game ready for a tentative late-2014 release. They’ve promised to keep backers updated here along the way.

This game(?) is so unusual that I’m not entirely sure where to begin in describing it. The guys behind the game (including Robin Arnott, the sound designer for Antichamber) seem to have an idea though. According to them:

SoundSelf is a sensual exploration game about the intrinsic pleasure of playing instead of the rewards of winning. You use your voice to explore a hypnotic world of sounds and visuals that feel like they are emerging directly from your body. Each tone will navigate you through strobing tunnels-of-light, impossible shapes, and into a meditative trance. The result is an elegant symmetry of image, sound and body: an entirely new experience of yourself and your world. Each play-through lasts one extremely intense hour.

Got that? Not quite? Maybe this will help:

So that’s SoundSelf; a little meditative, a little trippy, and a lot interactive. I for one don’t mind a game that I can get a little lost in, particularly during those intense sessions of procrastination when I’m too lazy even for games that require thought. Is that your kind of thing too? Help SoundSelf hit its very specific $29,060 Kickstarter goal here.

That’s all for this week, folks. Tune in next time for more Kickin’ It.