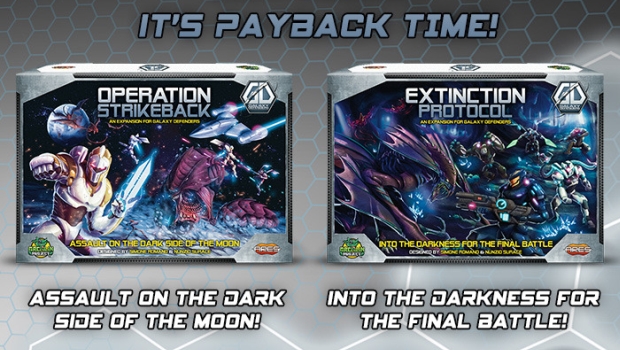 Cooperative games are some of my favorites, and several of them are starting to come out with a sci-fi theme.  Recently at Origins I got a quick look at Galaxy Defenders and came away impressed.  They have a Kickstarter posted for two expansions, and they recently added a last minute stretch goal.

In its final hours, Galaxy Defenders Season 2 campaign on Kickstarter, “The Earth Strikes Back!”, open a new “door” into the project – The GD Lab level. This new pledge level gives to a backer only the three exclusive KS figures – Tritium, Niobium and Xeno-Lord, at $ 35.00, with shipping worldwide for these three figures included.

The GD Lab backers will have the chance to upgrade from The Lab to any other level with the Pledge Manager. So, if you are a fan of Galaxy Defenders, and you cannot commit now to the higher pledge levels, this is a good way to support the project!

With more than $ 260,000 pledged and over 1270 backers, the Galaxy Defenders campaign on Kickstarter reached more than 25 stretch goals adding a lot of value in add-ons. Tuesday, June 17th, is the last day to pledge. The campaign  ends on June 18th at 3:00 AM CEST (1 AM UTC/GMT).

You had better hurry if you want to get it, as it has less than 12 hours remaining, but it looks like a great way to support the game and get a few figures in the process.  You can check out the Kickstarter here.