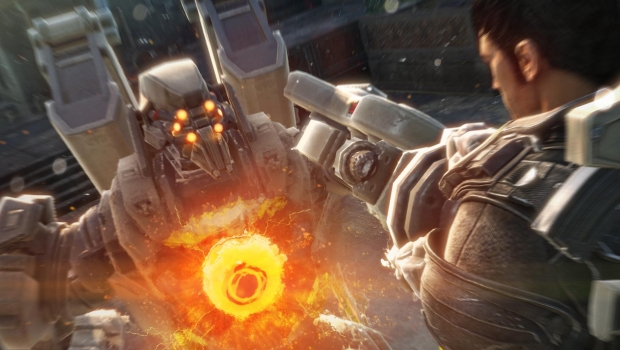 Fuse is heating up!  We got that solid trailer the other day and now we have a chance to try it out for ourselves on May 7th – EA and Insomniac announced that the demo for the game will hit on May 7th!  What is Fuse?   Well, no point in reinventing the wheel – let’s hear how Insomniac describes it:

Fuse is a co-op action game that allows both co-op and solo players to experience the unique attributes of each operative by using the game’s unique LEAP feature. Players can use LEAP to switch between the four Overstrike operatives at-will during combat. Each of the four characters is equipped with unique skills and weapons that are not only necessary for survival, but also create unexpected and extraordinary results. Powered by Fuse, the Xenotech weapons give players unique capabilities to expand their strategic options in combat. Through lethal teamwork, players can combine their weapons for unique kills to earn Fuse points for powerful upgrades. Players can also play online* or offline and level up along unique character paths, unlocking more powerful Fuse-driven abilities as the game progresses. In addition, the game’s progression system is unified between the campaign and wave-based Echelon mode, allowing players to continue improving their operatives regardless of how they play.

The game is right around the corner too – May 28th for North America and 31st for Europe, hitting on both the Xbox 360 and the PS3.   In a world where co-op shooters are rare, it’s cool to see a game purpose-built for that style.   This one looks good, so see you online shortly!