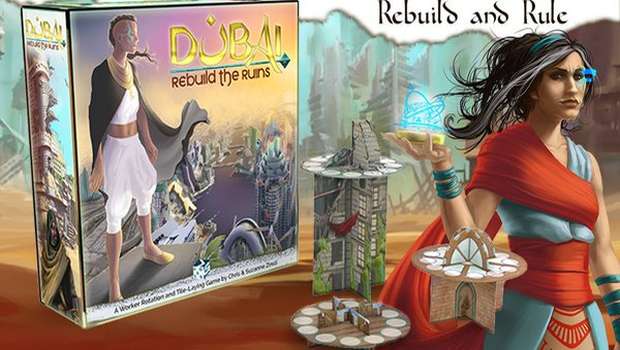 Building a city or farm from nothing isn’t an uncommon theme.  However, rebuilding a city with history gives it a new spin.  Dubai: Rebuild the Ruins aims to let you rebuild the city, but with more than just some tile-laying behind it.

Dubai: Rebuild the Ruins is a tabletop board game with Worker Rotation, Worker Placement, Tile Laying, and Resource Management elements set in the year 2299 for 2 – 4 players. Players compete with unique faction powers to rebuild the ruins of the post-apocalyptic/dystopian future city of Dubai. The faction that has rebuilt the most of the city at the end of the game will rule Dubai!

“Dubai: Rebuild the Ruins is built around a core mechanism that we’re extremely excited to introduce. It’s called worker rotation, and it’s something new that we think you’ll love.

After hundreds of play-tests, development, honing, tearing down and rebuilding, Dubai is now polished up and ready for your gaming table. We love it, and we think you will too.” – Chris & Suzanne Zinsli, Cardboard Edison

Greater Than Games is privileged to be working with the following artists on this project.

“Dubai is the best game I’ve played that hasn’t been published yet. Ever since I tried out the first version a few years ago, I’ve been excited about the day it finally gets released. The mechanics are easy-to-learn and intuitive but the decisions are complex and interesting. It’s a great game for experienced players and for gamers just getting into the hobby. Everyone should have a copy of Dubai.” – Doug Levandowski, Published Game Designer

“As with all games by the amazing duo at Cardboard Edison, Dubai is an intricate and intuitive experience. The worker placement and resource management aspects of it, combined with the unique turn system, make the game fun and addictive. I’m excited to see it with its new artwork, and looking forward to finally owning it!” – Nicole Kline, Cardboard Fortress

“Having played a lot of good prototypes while working with Unpub, it still remains a rare occurrence that I play a truly great game. Viva Java, New Bedford…Dubai. All of them struck me as amazing games after the first time I played them. I did not want to leave the event where I first played Dubai without a copy of it. For me, Dubai was that good. I found the central mechanic of the game (your worker placement) highly engaging, interactive, and unique. I loved the non-linear structure of the turns and how that flavors your strategic choices. I cannot wait to have an official copy of this game on my table.” – John Moller

The Story of Dubai: Rebuild the Ruins

THE YEAR IS 2299. THE GREAT WAR IS NOW JUST A DISTANT MEMORY IN THE MINDS OF ALL BUT THE ELDEST AMONG US.

Battles led to the splintering of the people living in the surrounding areas of The Shining City while one faction remained – the Hazimin. The Hazimin have done what they can to keep their still-glistening tower standing tall. However, though their monumental home of the Burj Khalifa is impressive, their numbers are few.

Even as new generations grow to power, the ruins of Dubai are at the heart of all conflicts among the factions of the wasteland. With the Burj Khalifa standing as a beacon of what once was – a promise of what could be again – the new leaders of each faction have decided it is time to reclaim the city and win back the allegiance of the people … and become the leaders of Dubai.

Power over the city will be decided by the people, and only with control of the city can one faction establish their dominance. As your faction’s leader, it is up to you to turn the ruins of the diamond of the desert into a new home for your people and all people. But your faction’s control must outreach that of other factions to ensure that you rule and rebuild the ruins in the city of Dubai.

It sounds like a unique mix of mechanics that could work well without being too complex.  If you want to find out more, be sure to check out their Kickstarter.