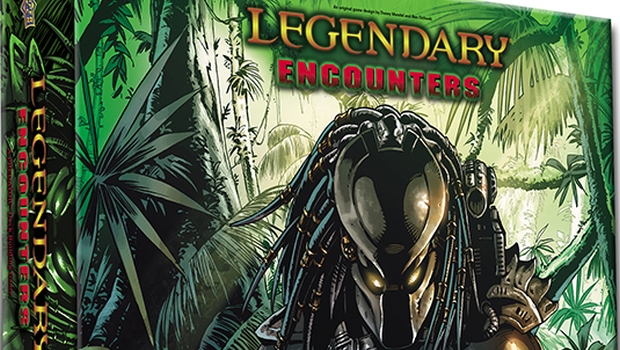 The Legendary system started with Marvel heroes and villains, but Upper Deck changed things with the release of Alien Encounters.  It seemed to be a departure from the original, but with the announcement of a Predator themed game.  Now that game has been released and is available in stores now.

Upper Deck and Twentieth Century Fox Consumer Products announced today the release of Legendary Encounters: A PREDATOR Deck Building Game, which is sure to become an instant hit with both Predator fans and gamers around the world.

This new release brings an exciting and unique element of gameplay to the popular Legendary Deck Building games, allowing players to choose a fully cooperative mode or fully competitive mode of play. In cooperative mode, players take on the role of the Humans and work together to complete objectives, stay alive and defeat the Predator.  In competitive mode, the basic game mechanics are the same, but players take on the role of the Predators, whose objective is to hunt their prey and earn the most honor.

“Predator fans will love being able to play through Predator 1 and 2 with this new game, and the fact that it’s 100% compatible with Legendary Encounters: an ALIEN Deck Building Game makes it even that much more exciting” said Jason Brenner, Upper Deck’s Entertainment Brand Manager.

Designed for 1 to five players, the game includes 700 cards featuring all new original art, a full color 33” x 14” game mat and color rule book, with a retail price of 59.99.

For more information or to order your copy of Legendary Encounters: PREDATOR, visit UpperDeckstore.com/Legendary-Encounters.

The ability to combine it with the Alien game should make this very attractive to fans of that game as well as fans of the movies.  Being able to play it solo is a nice feature as well.  Look for it now.