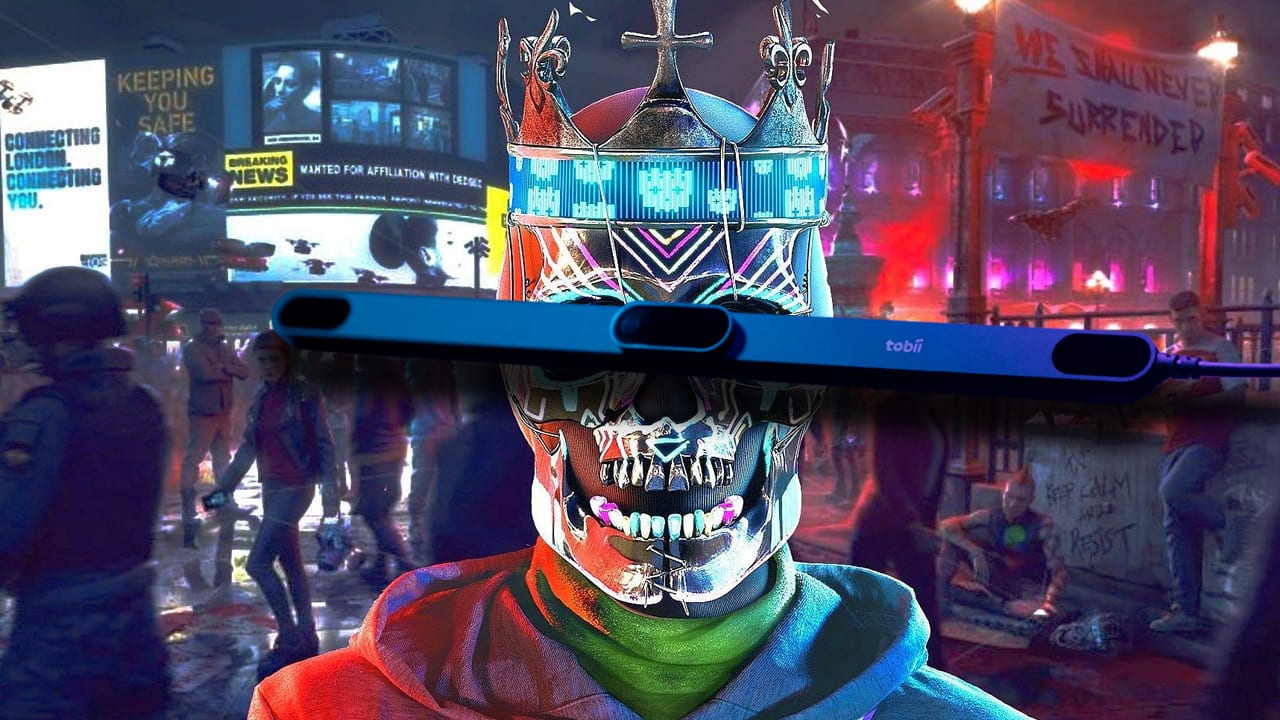 The Tobii Eye Tracker 5 was a solid improvement over its predecessors (our review), and we finally have some fresh content to play with thanks to Ubisoft. Watch Dogs Legion (you can read our review here) has an entire section devoted to the Tobii Eye tracking system that helps really push the cyberpunk angle. Let’s take a closer look at what Tobii is bringing to the table.

Underneath the Gameplay heading in the options lies a tab for “3rd Party”, which is where you’ll find six eye tracking options for the Tobii Eye Tracker. Specifically those options are “Gaze Targeting”, Melee at Gaze, Clean UI, Menu Navigation, Selection Wheels, and Lighting Adaptation, and we’ll go over each one individually and in detail.

Gaze Targeting has three options – off, Hacking, and Hacking and Aiming. These let you target with your eyes, allowing you to shoot or hack that target. Melee at Gaze does pretty much the same thing, but now you can melee that same target. Clean UI is a familiar feature, lowering the overall opacity of the HUD elements when you aren’t looking at them directly — a real immersion improving feature.

As you can see in the video above, I’m able to drive and still quickly select targets in the environment. Using a thumbstick to do this is painful by comparison, so this is a big gameplay improvement. Being able to quickly zap a drone out of the sky without doing so much as look at it feels like real hacking on the fly.

Most of your menu selection options in Watch Dogs Legion, whether it’s weapons or hacking, are navigated using selection wheels. Now, instead of bringing it up and then using the thumbstick to select them, you can point at what you want with your eyes and then release the selection button. In the video above you’ll see me bring up the menu wheel and then quickly select insults and then my shotgun. Replacing the thumbstick isn’t as consequential as hacking at my gaze, but it’s neat.

Lighting adaptation is an option that you are going to absolutely love or hate, there’s little in between on this one. What this option does is dim anywhere you aren’t looking a bit, narrowing the focus to just where your gaze is resting. It’s not dark, but it really does change the overall scene. You can see in the video above what that looks like and you can judge for yourself.

Ultimately the Tobii Eye Tracker 5 adds quite a bit to the formula with Gaze Targeting. It helps quite a bit while driving, and these sorts of immersion-raising techniques are precisely why the Tobii stays connected to my PC all the time.

The Tobii Eye Tracker 5 is available now for $229 with a free copy of Assassin’s Creed Valhalla or Watch Dogs Legion as a bonus, making it a great choice for the gamer who “has everything” this holiday season.

Ron Burke is the Editor in Chief for Gaming Trend. Currently living in Fort Worth, Texas, Ron is an old-school gamer who enjoys CRPGs, action/adventure, platformers, music games, and has recently gotten into tabletop gaming. Ron is also a fourth degree black belt, with a Master's rank in Matsumura Seito Shōrin-ryū, Moo Duk Kwan Tang Soo Do, Universal Tang Soo Do Alliance, and International Tang Soo Do Federation. He also holds ranks in several other styles in his search to be a well-rounded fighter. Ron has been married to Gaming Trend Editor, Laura Burke, for 21 years. They have three dogs - Pazuzu (Irish Terrier), Atë, and Calliope (both Australian Kelpie/Pit Bull mixes).
Related Articles: Hardware, Watch Dogs: Legion
Share
Tweet
Share
Submit