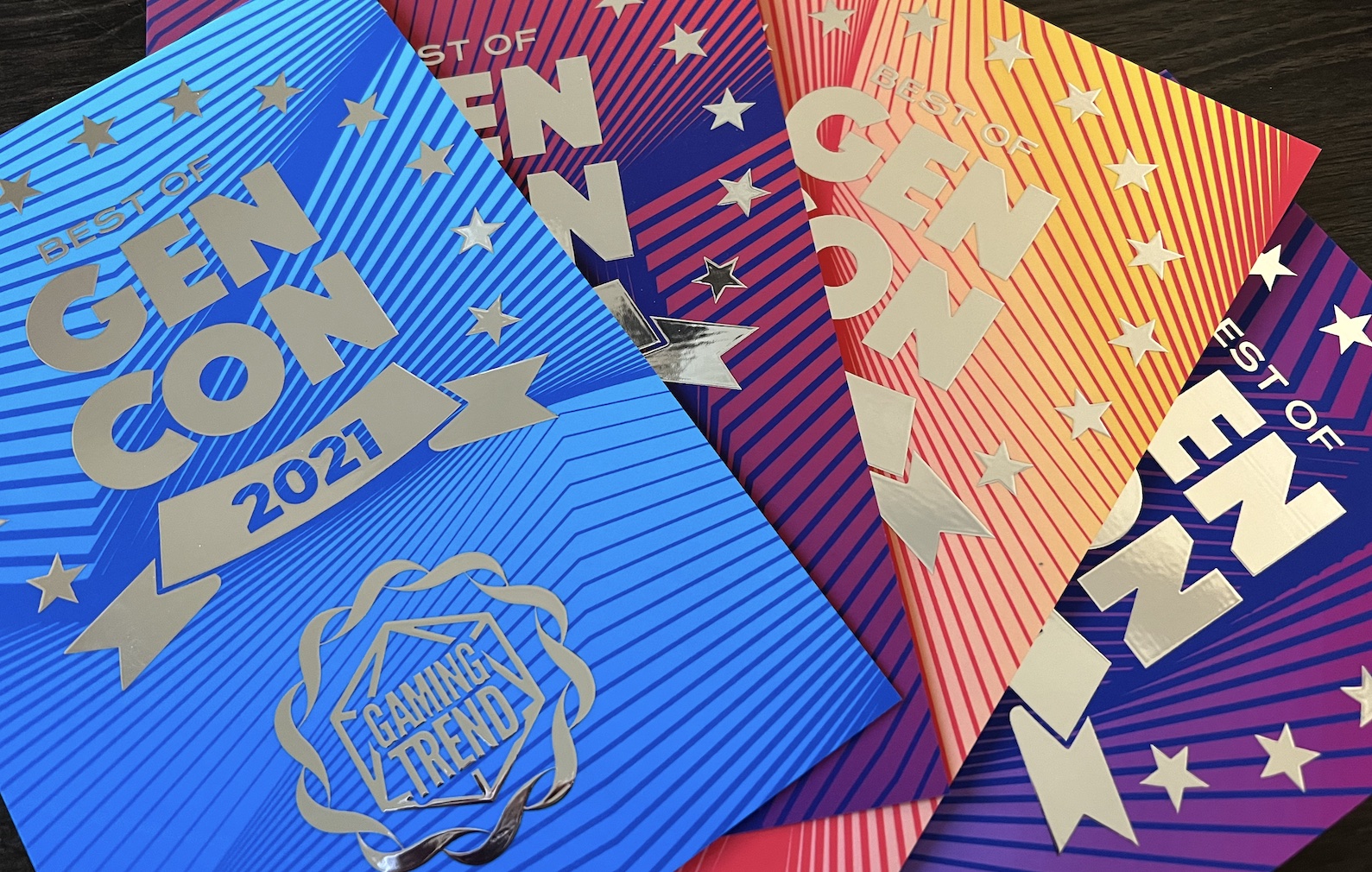 We weren’t quite sure what to expect at Gen Con this year; last year’s event was virtual due to the Pandemic, and several of the biggest names in gaming opted out of this year’s scaled-down in-person gathering in Indianapolis. Aside from being pleasantly surprised at how well 35,000 gamers follow mandatory mask rules, there were quite a few things in the exhibit hall that caught our eye, but these were the things that we liked the most: 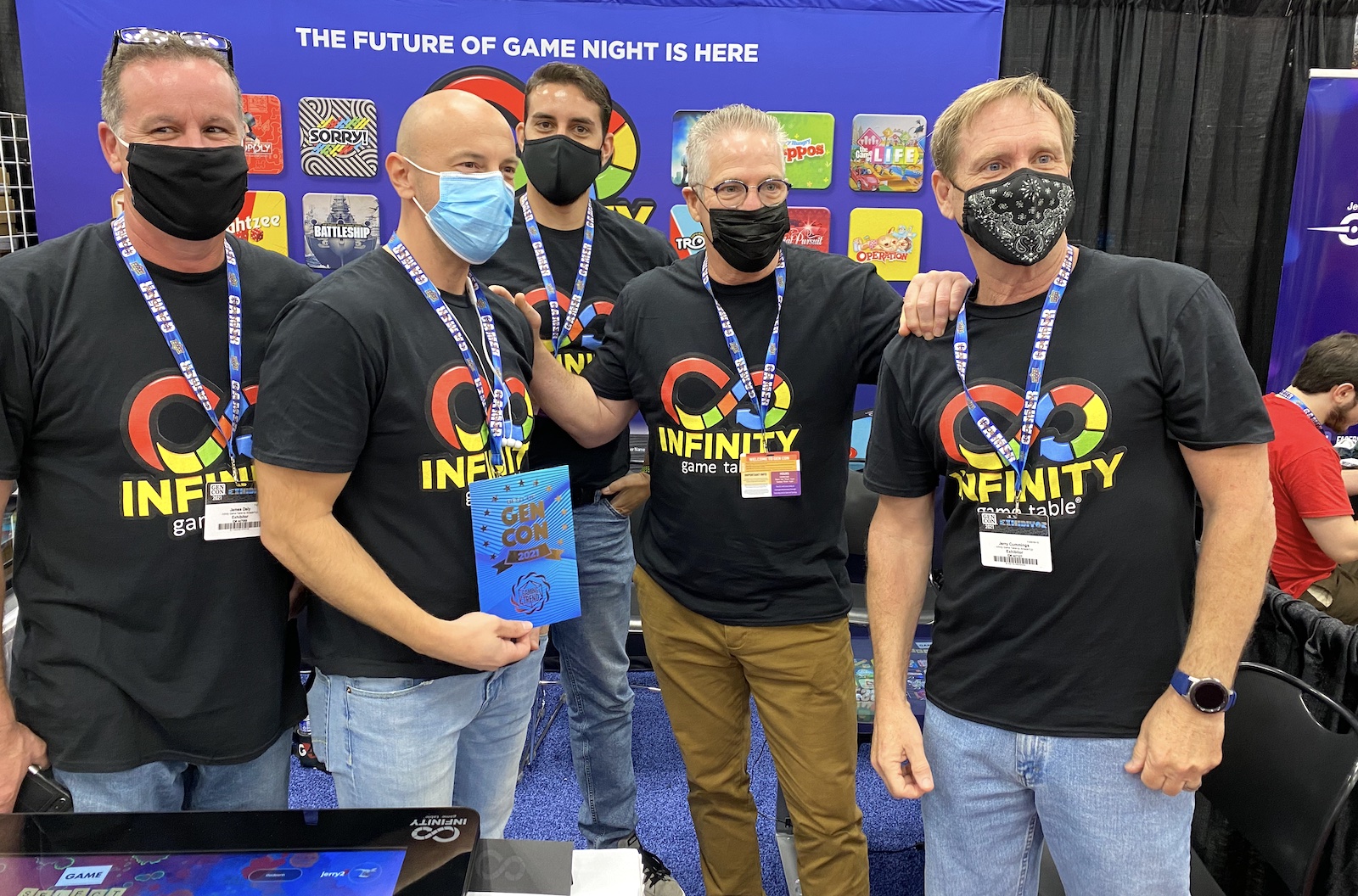 Arcade1Up’s Infinity Game table proposes a digital experience that replaces dozens of classic games that might be on your shelf with one touchscreen table. While the initial library offering consists of primarily Hasbro games such as Monopoly and Life, classics such as Chess, Backgammon and Othello, and a handful of small-scale games designed for the table from scratch, The Infinity Game Table promises heavier fare on the horizon, with Ticket to Ride and Pandemic already on the way. We’ll have more to say about this platform in the coming weeks, so keep your eyes peeled! 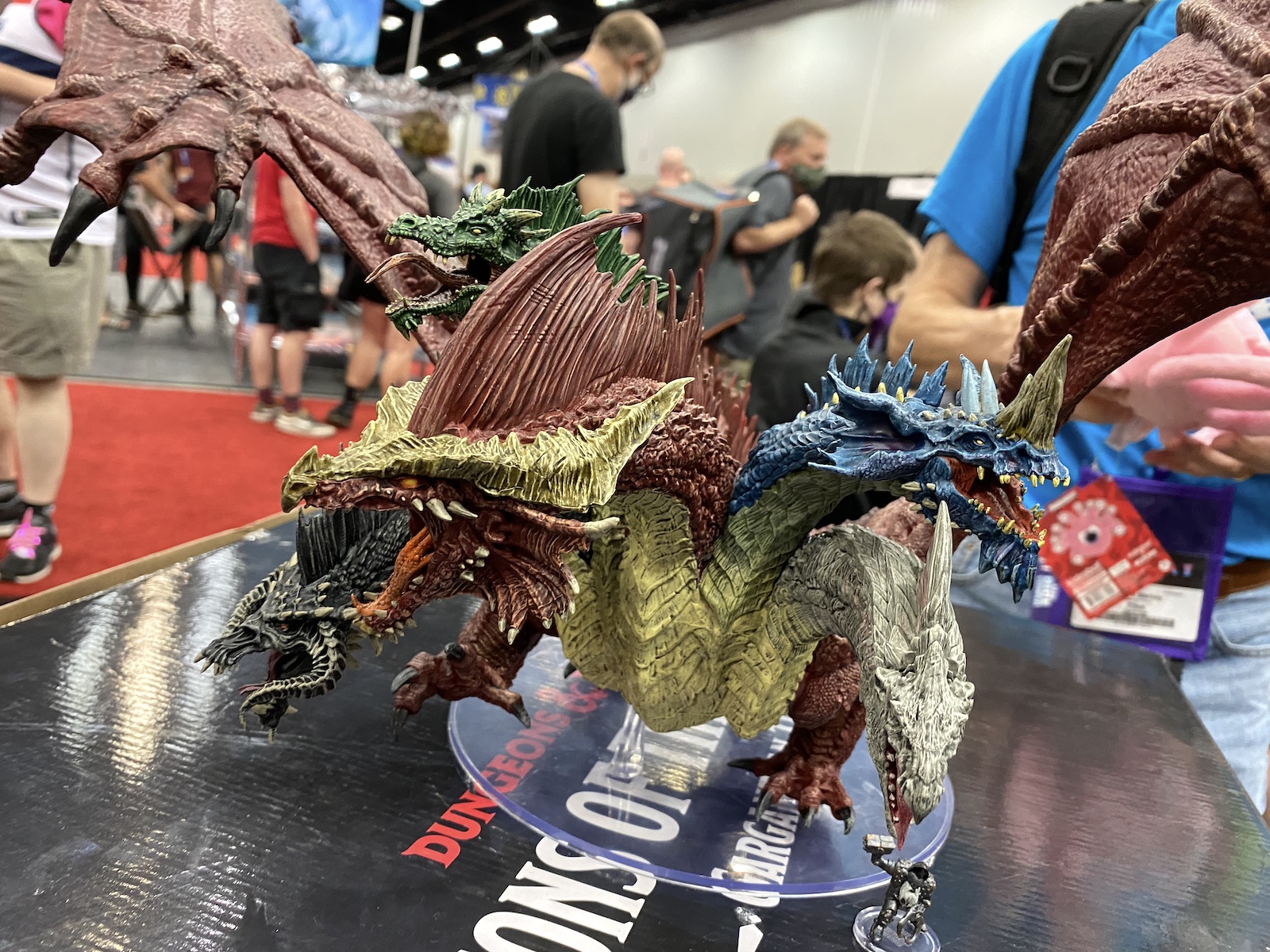 We’ve been a big fan of the various WizKids miniature lines for awhile, but this year two things in particular stood out to us: the biggest to-scale “miniature” they’ve ever made, Tiamat, the five-headed queen of all evil dragons, looks just gorgeous. And on the smaller (and less expensive) side of things, the new Idols of the Realms 2D Acrylic miniatures; We’ve seen 2D minis before, but these are surprisingly stunning in person, and are so well made they don’t look horribly out of place next to standard painted minis.

Idols of the Realms 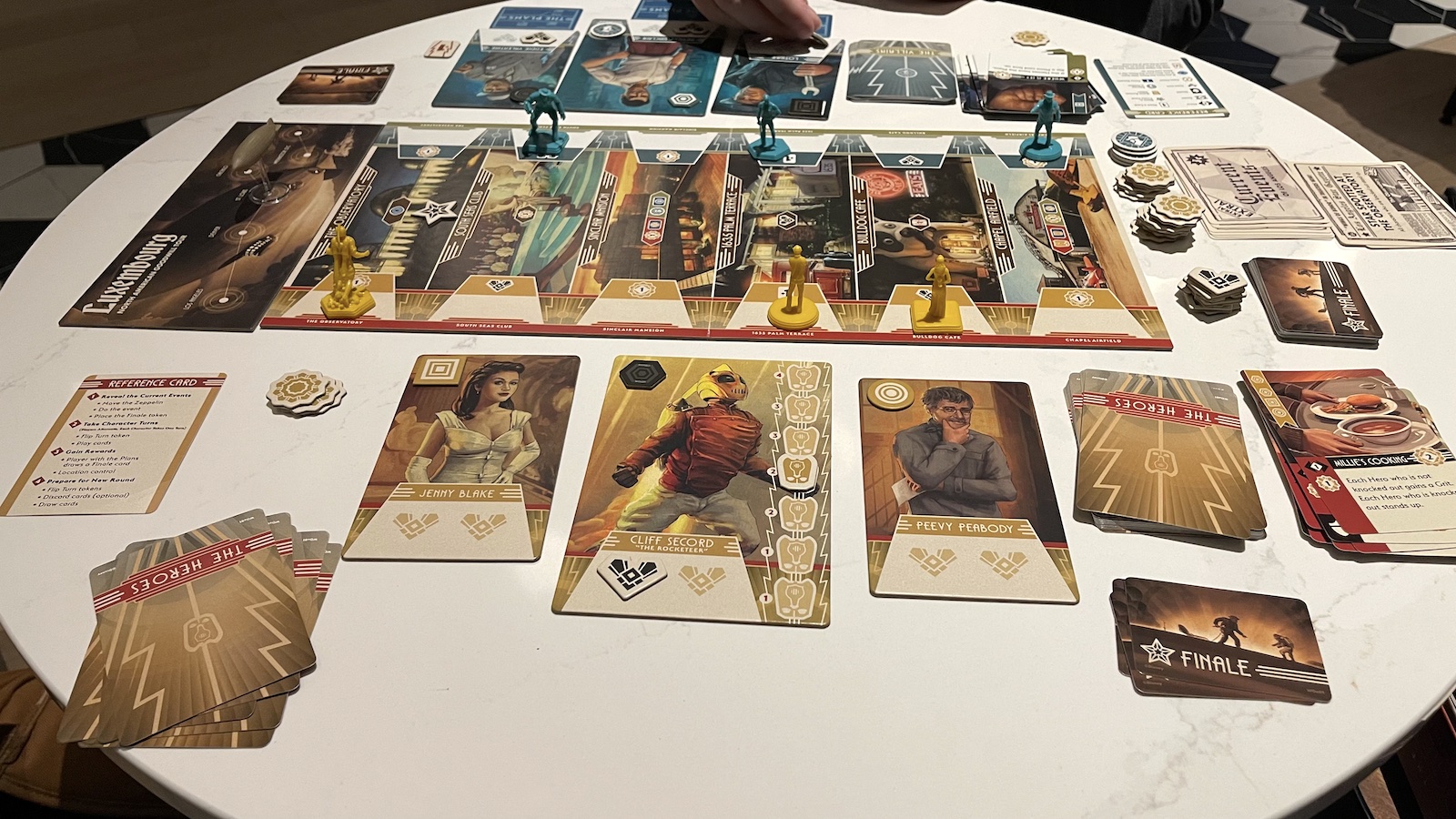 Best 2-player game- The Rocketeer: Fate of the Future

A spiffy 2-player game with a theme based on a horribly underrated early comics-based film? I’m totally in! One of the few games we actually got to play during the con this year, The Rocketeer: Fate of the Future looks gorgeous, plays great, and really embraces the theme in a more indirect way than I expected. We’ll be posting a review soon!

The Rocketeer: Fate of the Future 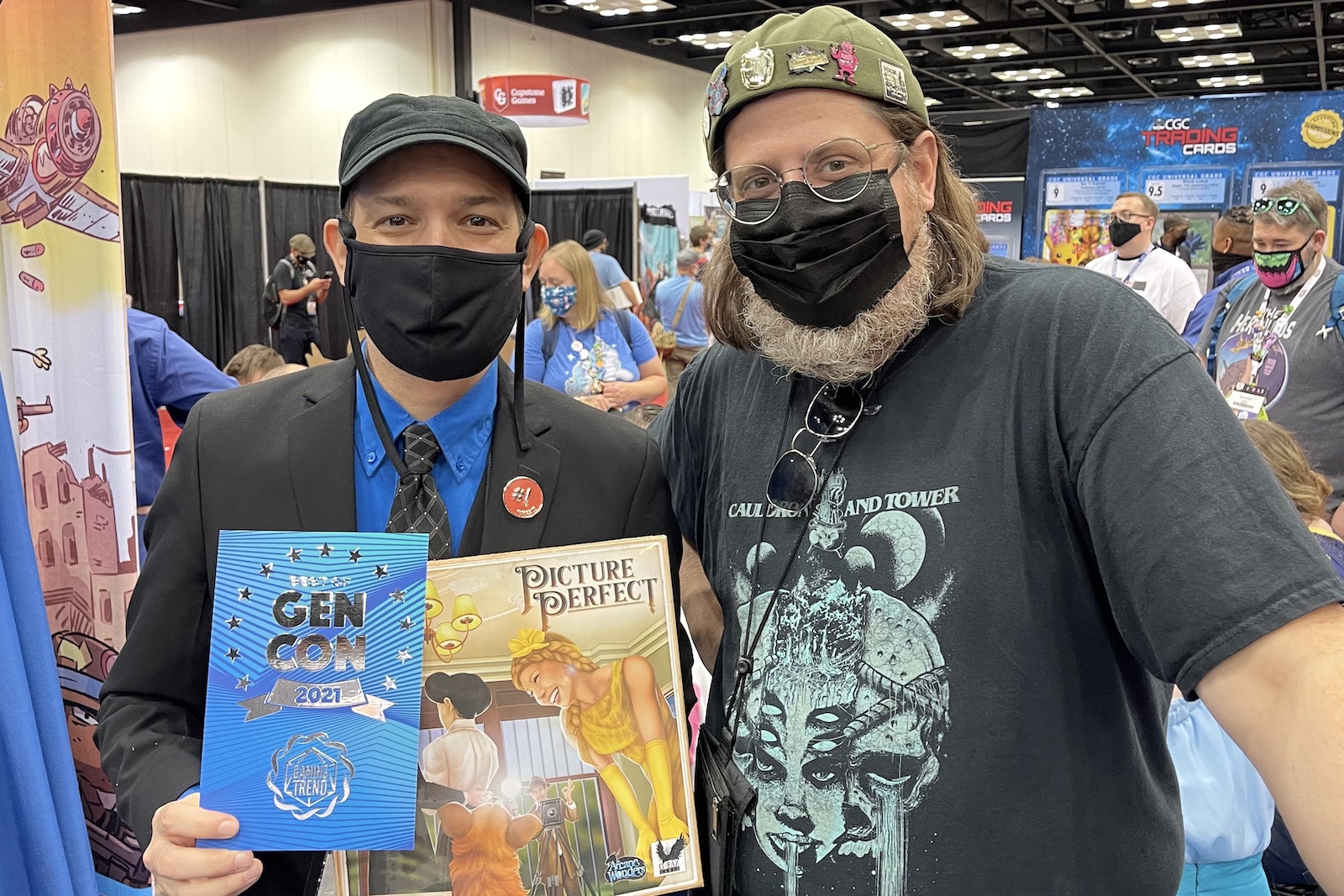 As the saying goes, the best camera is the one you have on you, and Picture Perfect has players setting up the perfect photograph in this 2-4 player game. Once you have everyone in place, you simply pull out your cell phone and snap a picture, just as you would in real life. Simple, clever, and one of the best uses of a mobile device we’ve seen in a tabletop game to date. 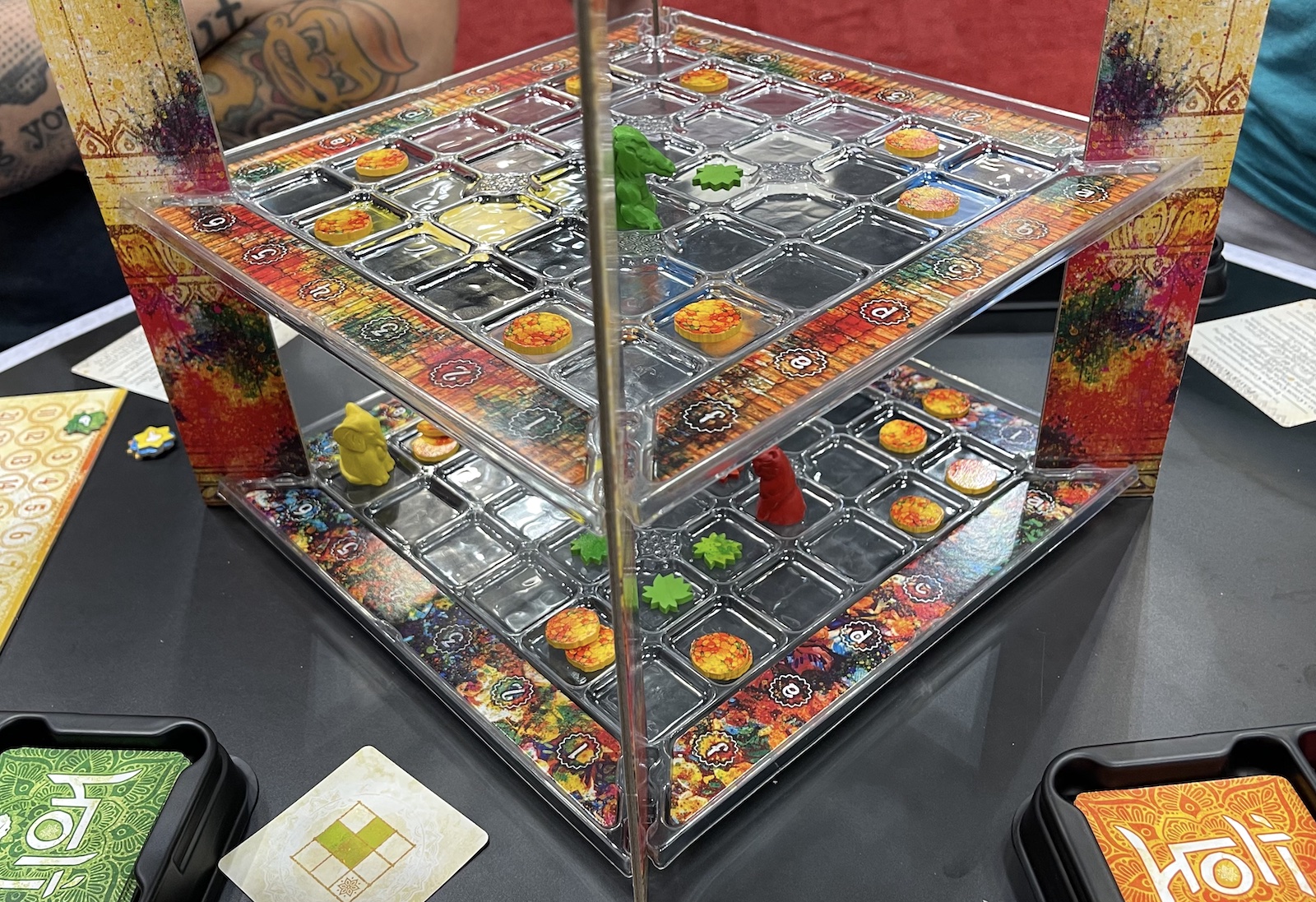 Best use of color- Holi: Festival of Colors

Box art and component design has been getting better and better overall in recent years, but few have captured the theme of the game as effectively and as gorgeously as Holi: Festival of Colors. From the box cover, to the three-tiered board, to the brightly painted wooden bits, this game has a table presence that is a feast for the eyes. 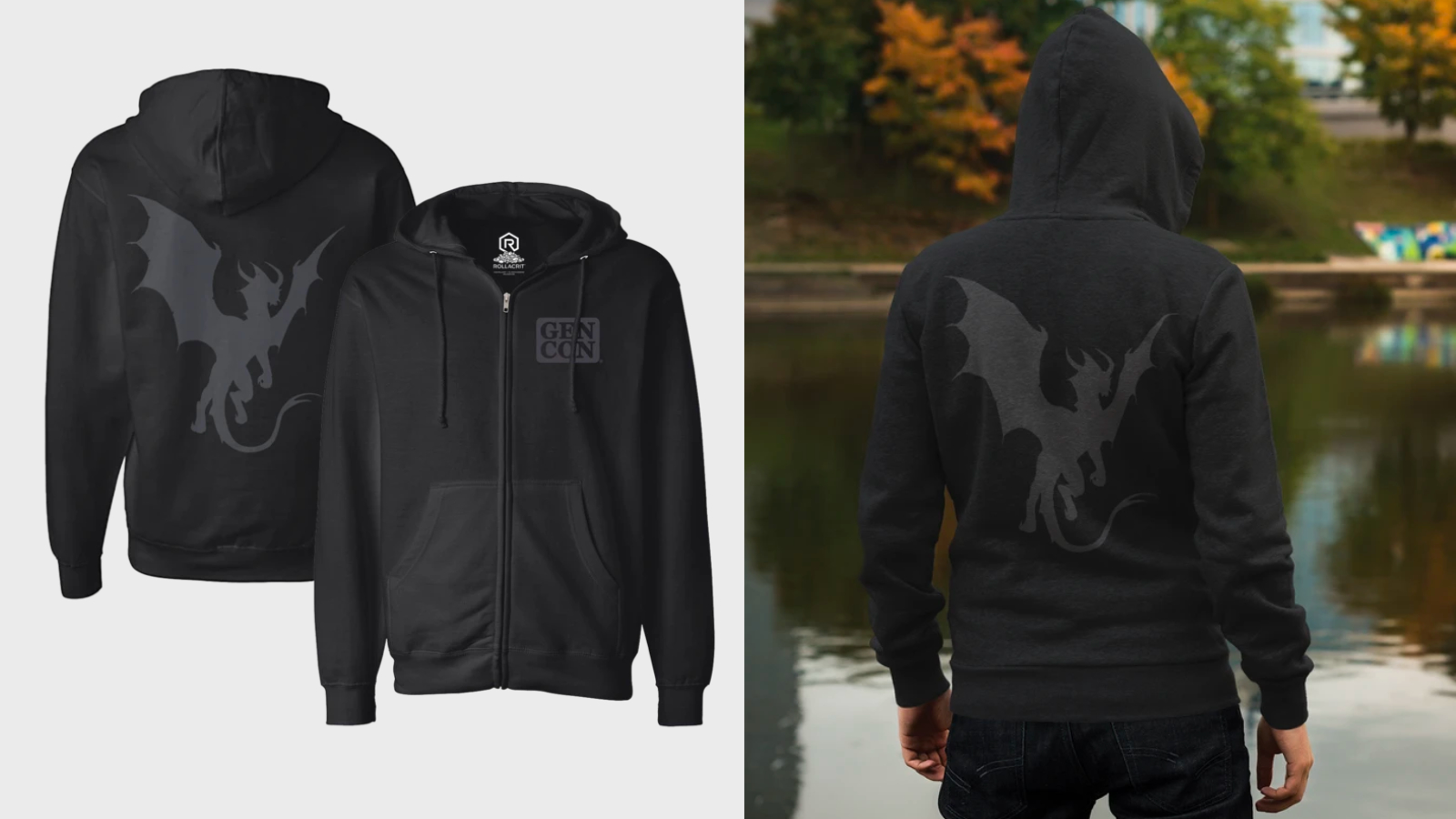 Comfortable and understated, this black zip-up hoodie sports a small, grey, Gen Con logo on the front and a big, gray, shadow of a flying dragon on the back. It lets people know that you’re a fan of Gen Con and you know how to look good while staying warm. We aren’t the only fans — plenty of attendees were seen wearing this article throughout the convention! 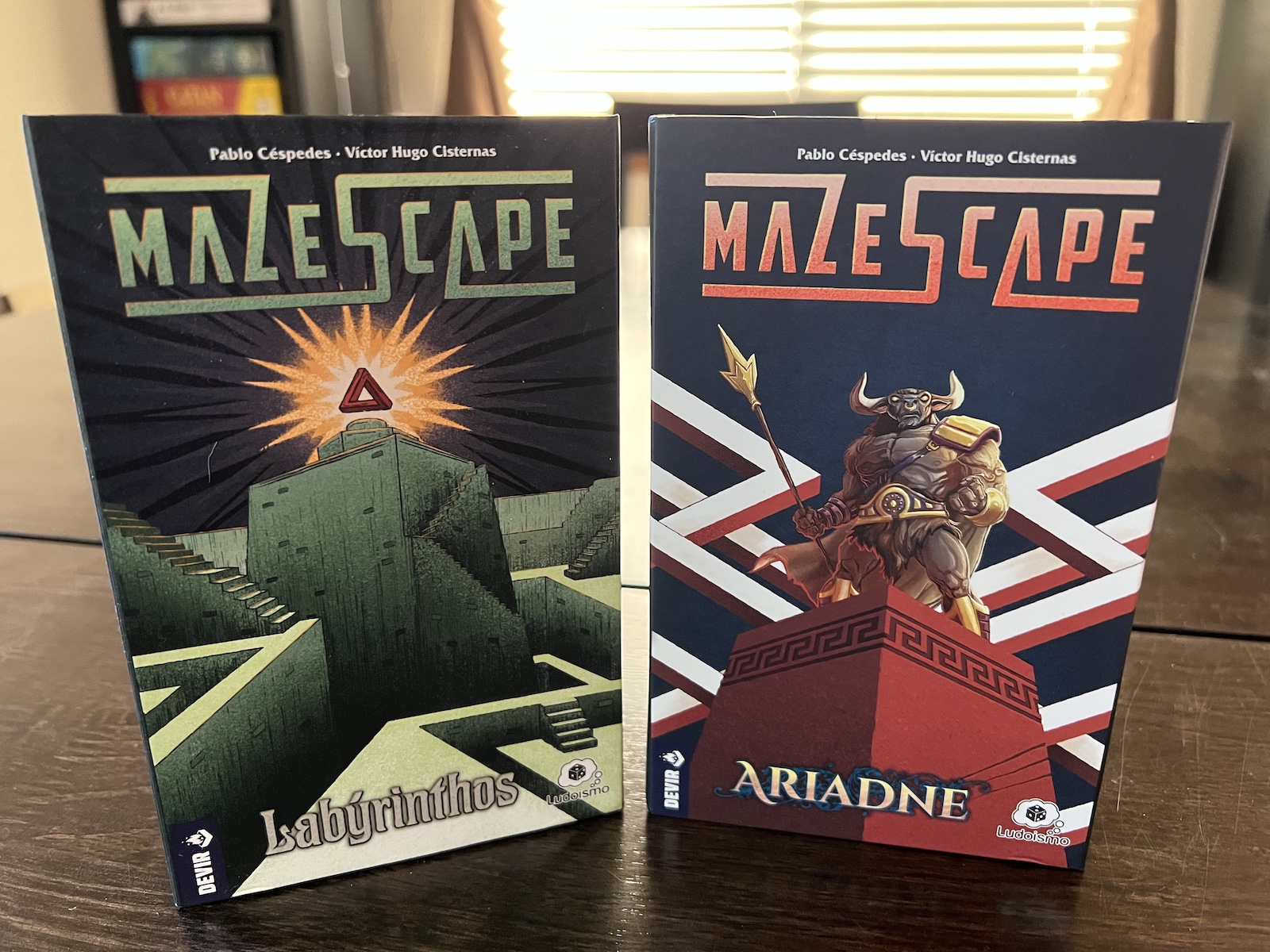 When you are hanging out in line at the DMV, pulling out your cell phone isn’t the only option available, you can also whip out a maze from a Mazescape box. These puzzling little games will occupy your mind and give you something to think about without taking up a lot of space. Each of these folded up puzzles starts you out on a square of paper that unfolds and refolds to change the maze as you go through it. You have a series of tasks to accomplish on top of just getting through the maze. With ten mazes in a box, even if you figure out all the ins and outs of one of them, you’ll have plenty more to occupy your time. 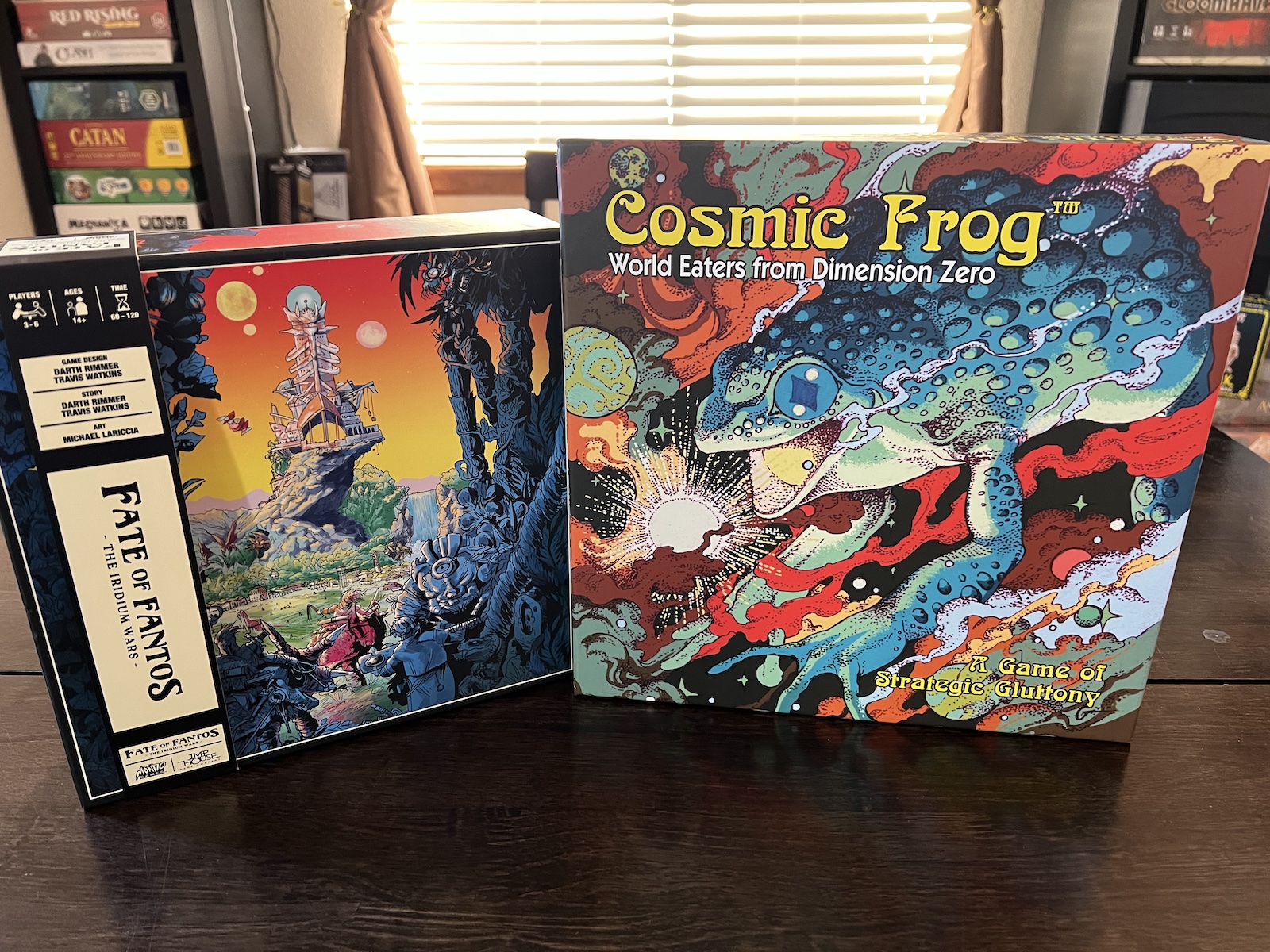 Both of these games had box art that was instantly striking from across the room. Fantos with the Heavy Metal-esque illustrations dominating each surface, the only hint of a logo or description was on the thin cardboard band. Cosmic Frog with, well, giant space frogs crackling with waves of cosmic energy that would make Jack Kirby proud. We’d gush some more but we want to save some for the reviews! 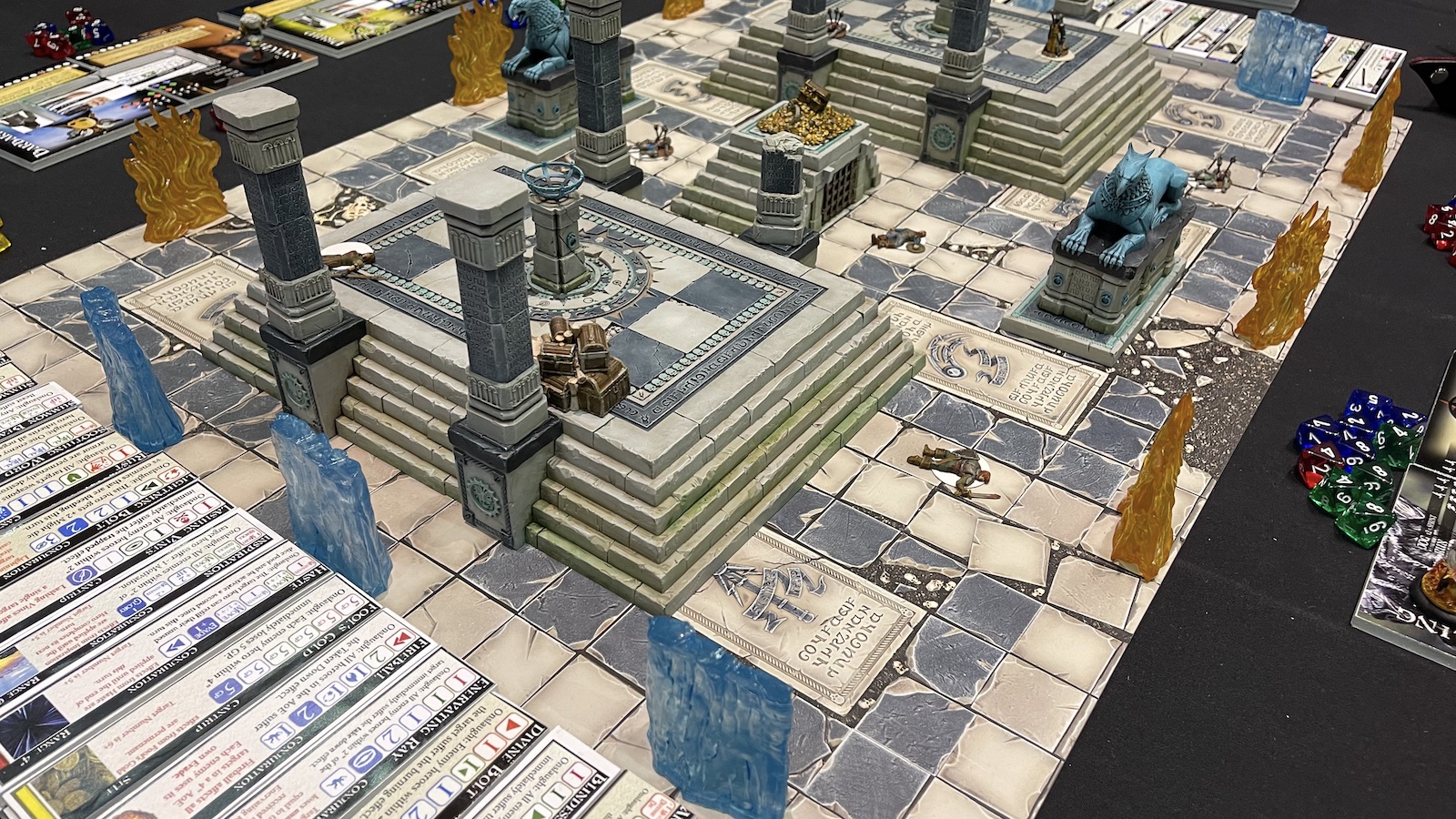 Playtesting unfinished games can often be a mixed bag, but occasionally you come across one that really stands out and shows some legs early on. While the placeholder terrain elements and models designer Paraic Mulgrew used for the tactical map of this miniatures skirmish game did little to convey what made it different from similar games, the two part player tableau of race/class and the way dice not only measure hits and misses, but how powerful a strike or spell is. We’ll be keeping an eye on this one! 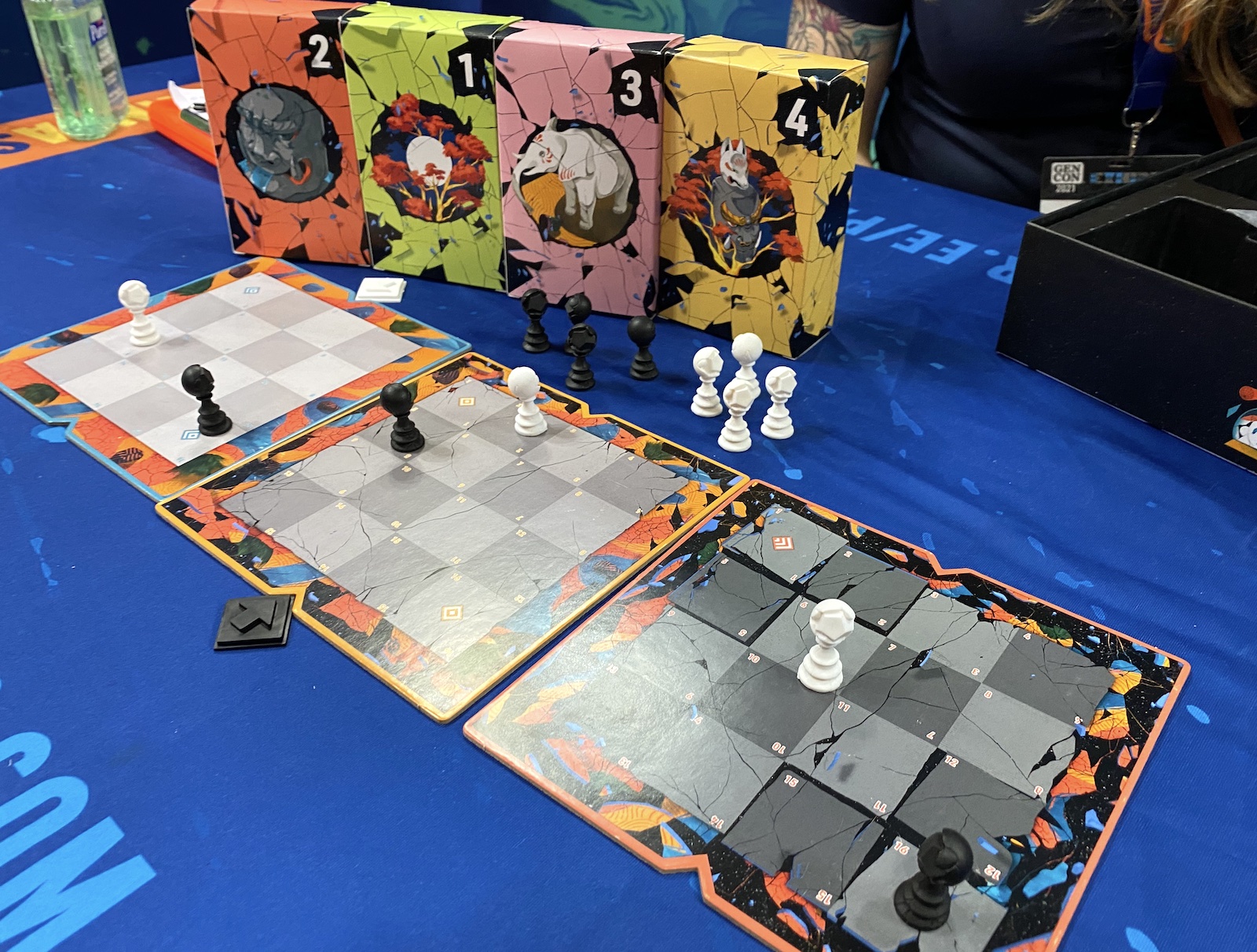 Best game title- That Time You Killed Me

Just seeing the title alone made us want to see what this game is about. We weren’t disappointed, the game concept and play really highlighted that someone is getting killed, at least once. In this interesting game by Pandasuarus, one player (you obviously) has invented a time machine and the other player (your despicable opponent of course) is their nemesis trying to claim the invention for themselves. Both players have decided to solve the dispute by killing each other off throughout time. There are three chess-like boards that represent the past, present and future. Players move their pieces around the three time periods trying to kill off their opponent’s pieces. As players time travel between boards they create more copies of themselves to help out with the murdering. The game comes with sealed chapter packs that include new rules and pieces, further complicating the game as you increase in skill level. This two player game should take from 15 to 30 minutes to play.

That Time You Killed Me 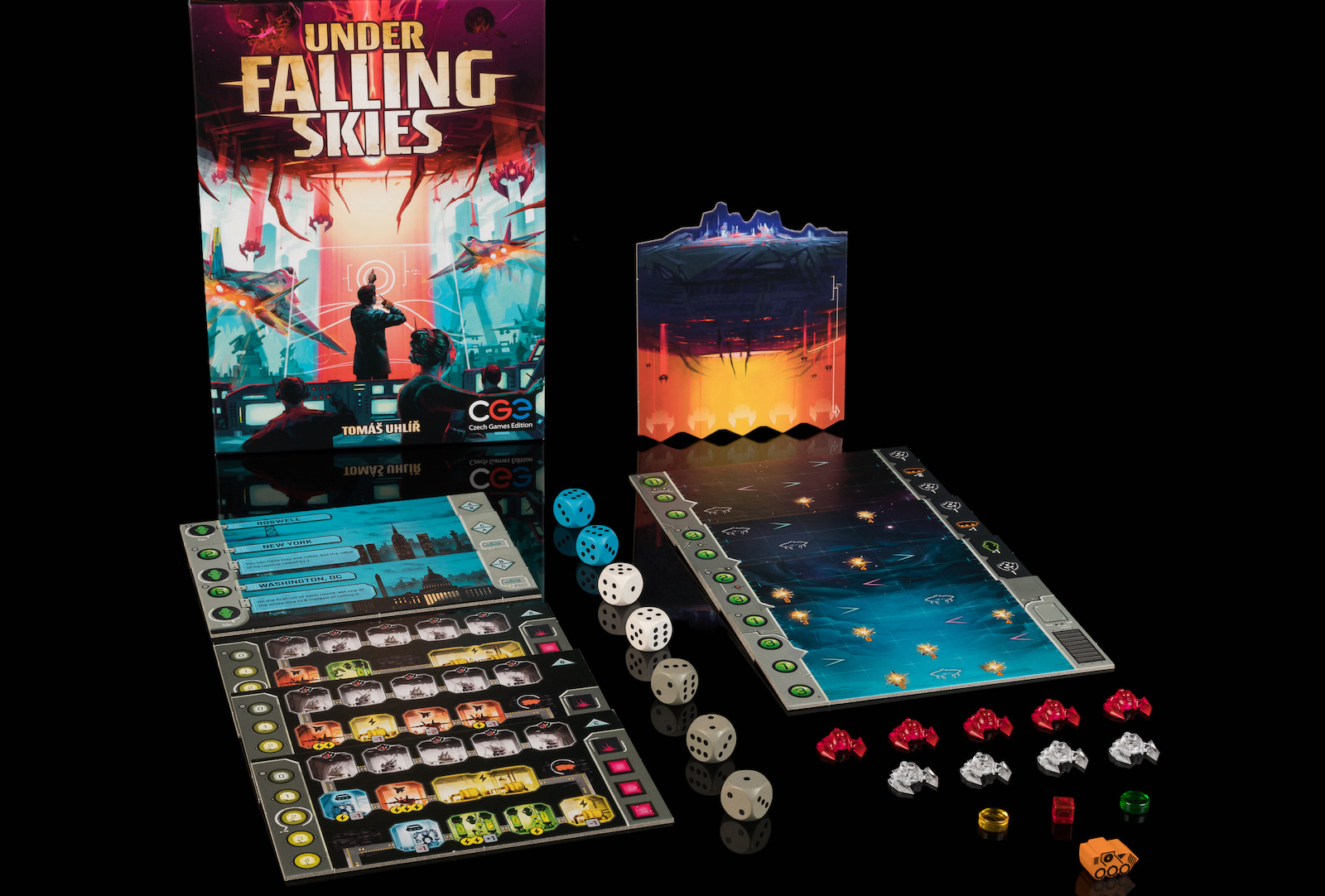 Just looking at this game on the table reminds you of the classic game Space Invaders. With a board that shows a city at sunset on the bottom and a progressively darkening sky fading away towards an alien invasion force at the top. But as the game progresses, players find themselves defending against those aliens as they progressively work their way down towards the ground. Don’t be surprised if someone sets a quarter on the side of the board to reserve their next play of Under Falling Skies by Czech Games Edition. 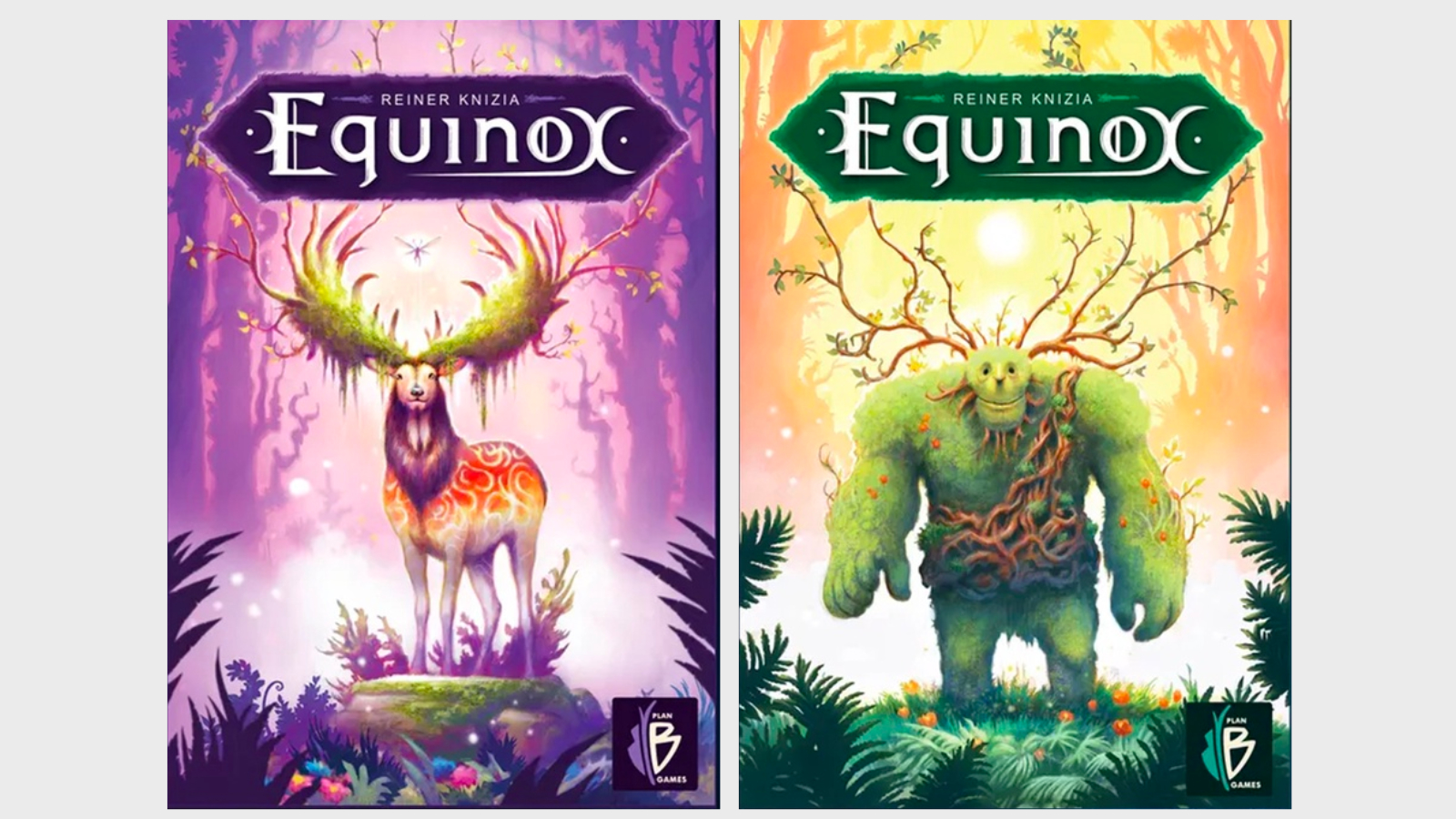 The art for Reiner Knizia’s Equinox by Plan B caught our eyes as soon as we walked into the booth. There are two different box covers, the purple hued one has an amazing deer-like creature and the green hued box has a large plant-man. The art is lighthearted and colorful and we could easily see these box covers as posters for the walls in a game room. The fantastical creatures that grace the covers are just a couple of the menagerie that fill the boxes. 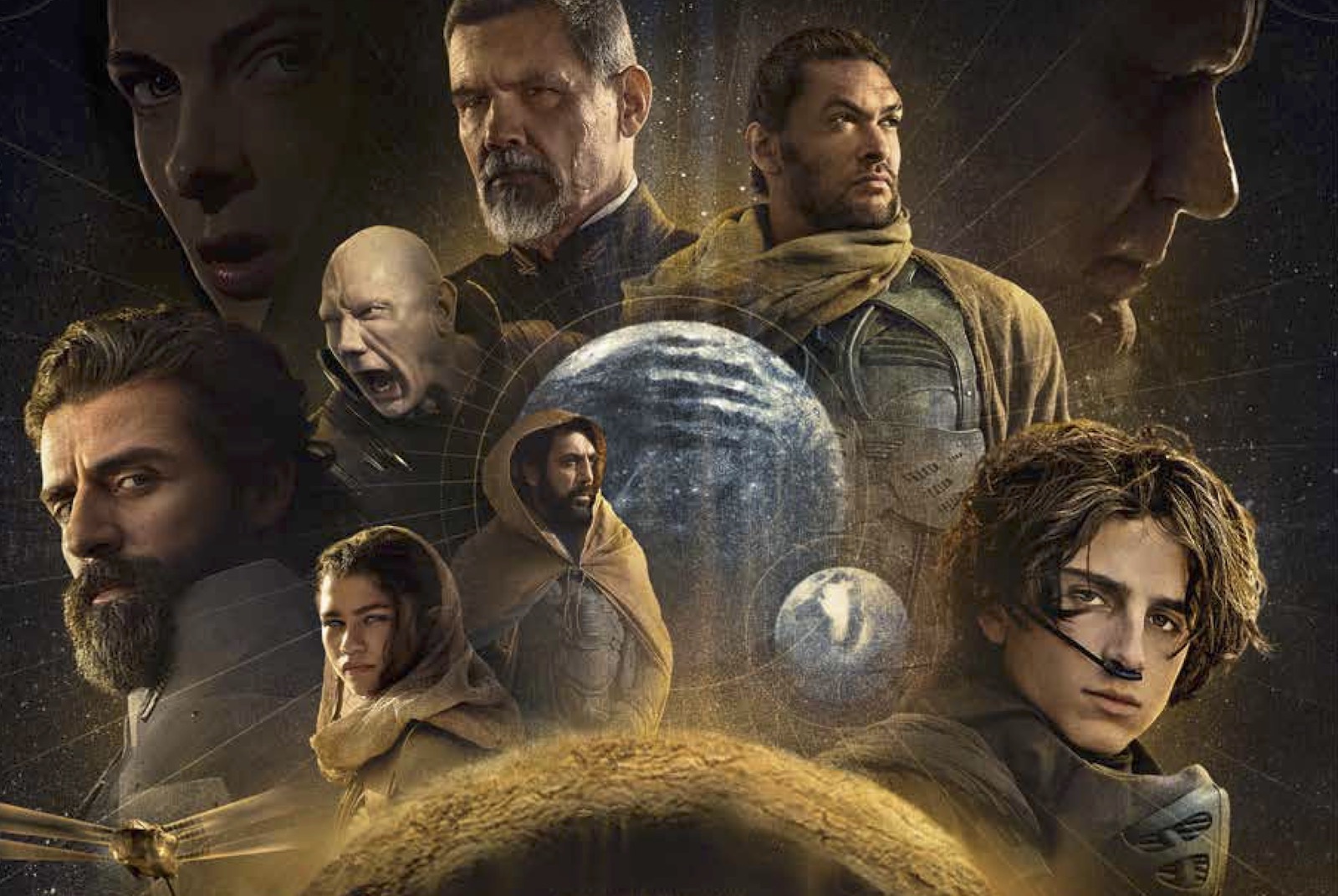 You may have seen the new Dune movie by the time you read this, and you may want the spice to flow at your game table to keep your mind off how much you want to see part 2 NOW. Well, Gale Force Nine, the makers of the 2019 reimplementation of the classic Avalon Hill game, have two new movie-themed titles to tide you over until the inevitable sequel comes out. Dune: A Game of Conquest & Diplomacy is a streamlined and simplified iteration of their first Dune-themed game, a fun alternative to the hours-long megaheavy gameplay we know and love. Dune: Betrayal, however, is more of a small-box social deduction game. Keep your eyes peeled for our reviews! 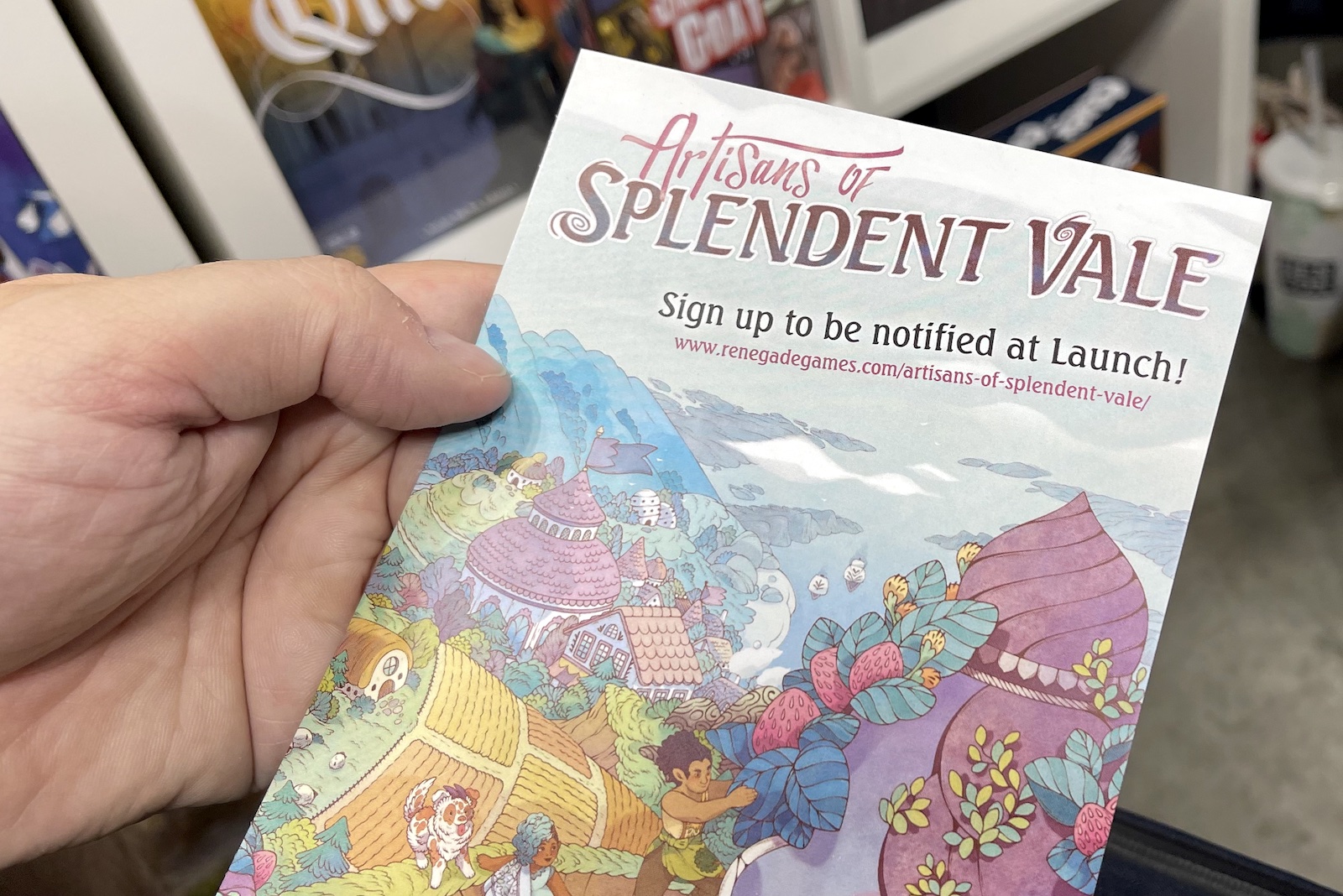 All we saw at Gen Con was some box art and a promotional postcard, and it won our hearts. The lush pastel cartoon art style drew us in and made us want to have adventures in that world. Once we got home and checked out the freshly launched Kickstarter, we knew that our first impression could be trusted. While the Kickstarter has ended successfully, you can check out the game and get in a late pledge here 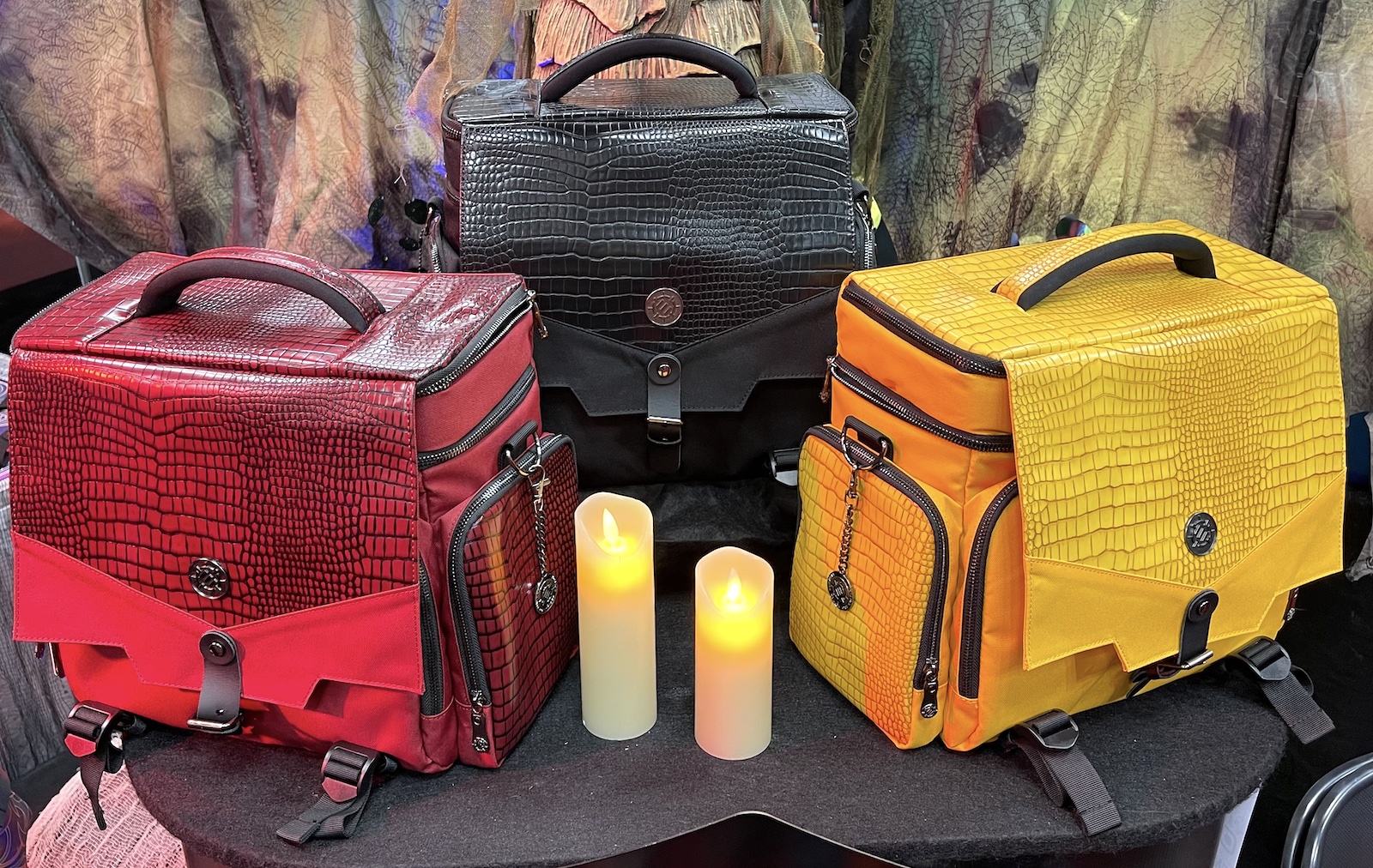 We’re always on the lookout for new ways to transport our gaming gear, and when we discovered ENHANCE’s booth, we knew we had to get a closer look. With an extensive array of RPG bags, Card cases, and more, it was the Dragon Hide RPG bags -guarded over by an animatronic dragon- that really caught our eye. Check out our tour of their booth and product offerings above. 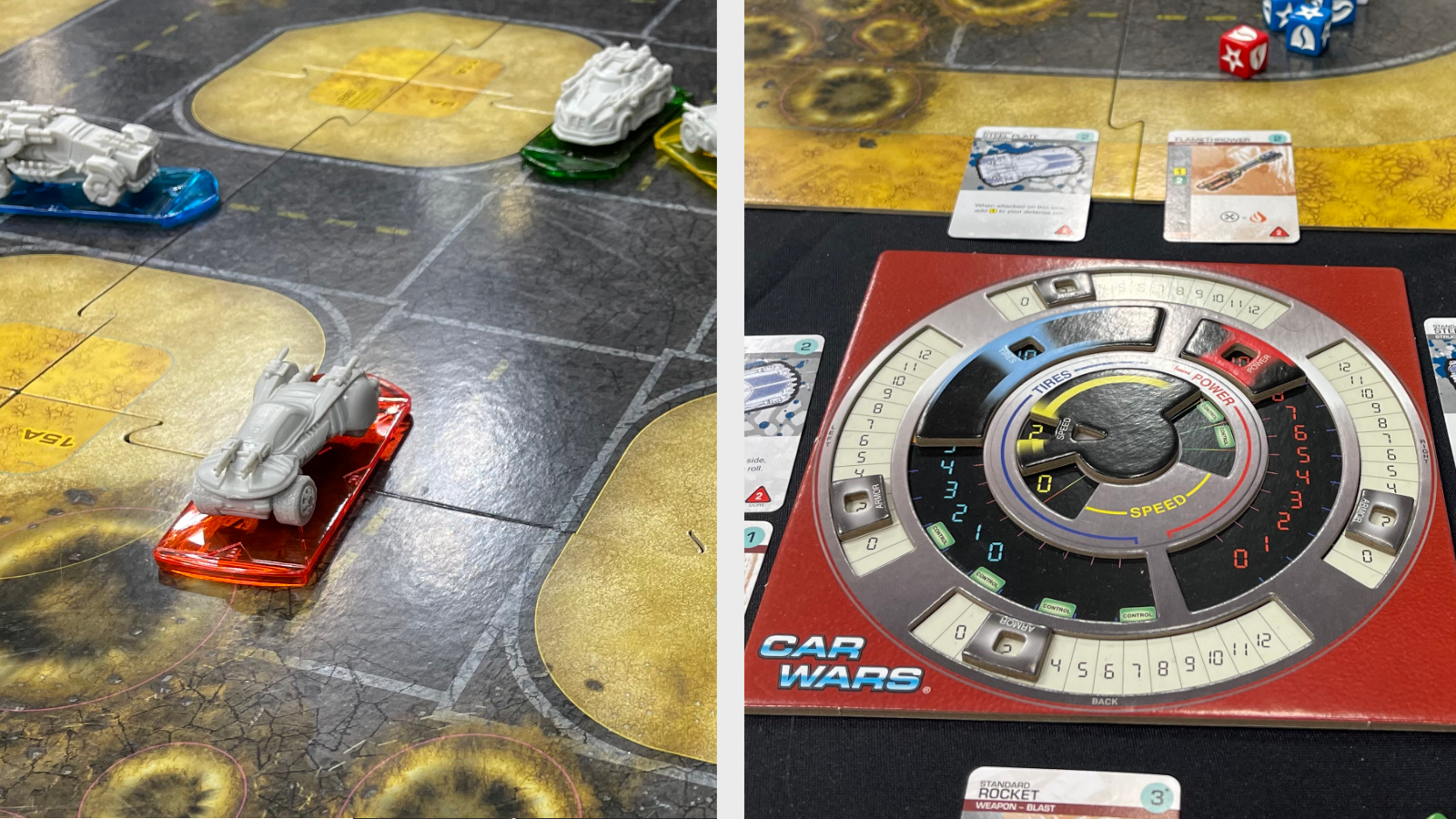 We’ve watched raptly as this game progressed over the last few years, from Fnord Con, to PAX Unplugged, to now. Finally, Car Wars 6th edition -an almost complete redesign of the classic original black box game by Steve Jackson- is done, shipping out to backers, and ready to hit shelves. Our favorite part? Going from thin cardboard chits to hotwheels-sized paintable car models. 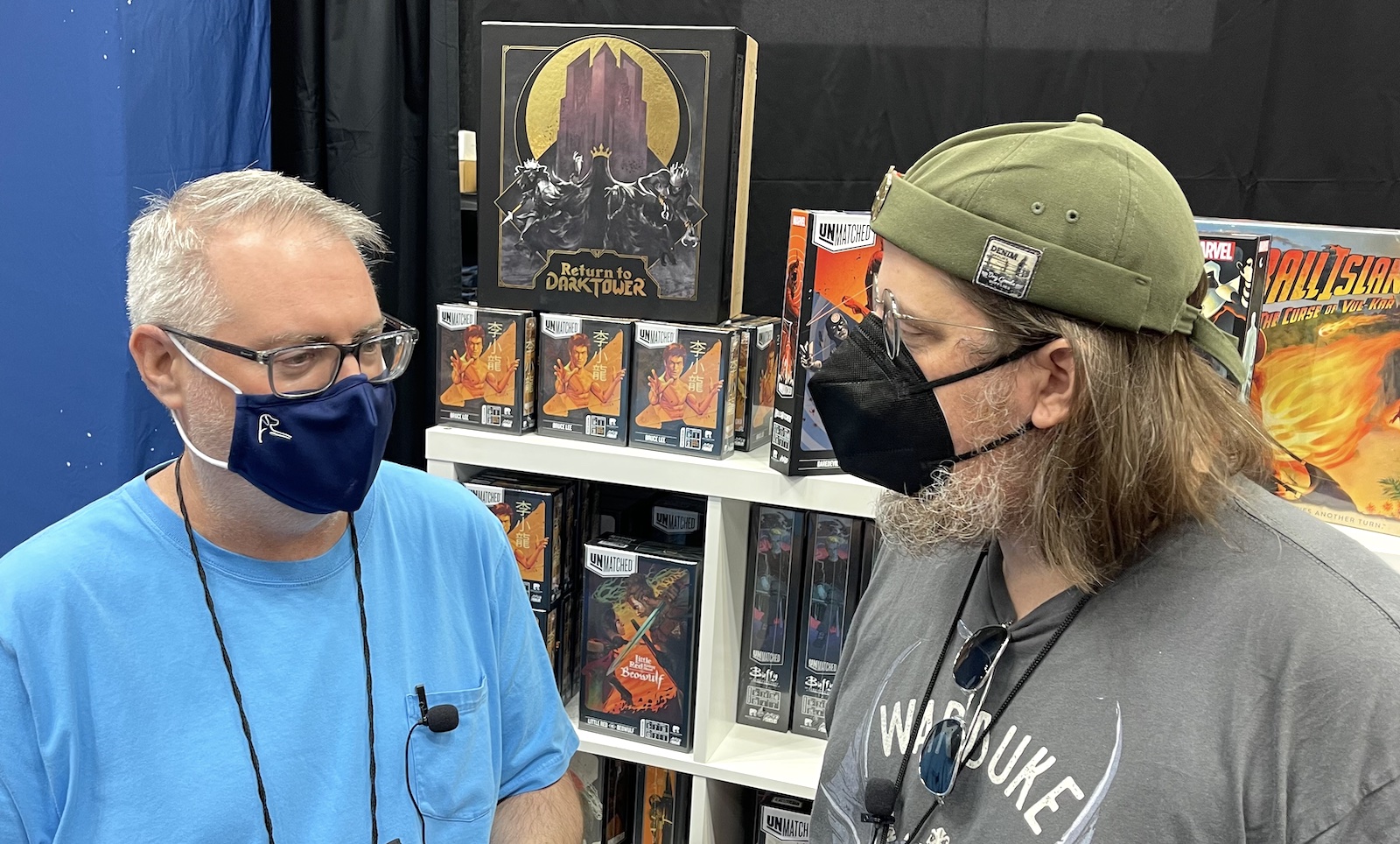 While nobody’s happy about all the shipping delays that have plagued the industry recently, we can at least happily look forward to a time when all those anticipated products will finally show up. For some companies, like Restoration Games, the build-up of products in the shipping queue equals a build-up in anticipation for the customers. While the Thunder Road: Vendetta, Crossbows and Catapults, and Omega Virus are officially in the works and on the horizon, it’s Restoration’s upcoming releases that are looking especially nice, starting out with the much anticipated Return to Dark Tower, then the Unmatched Marvel sets, Key to the Kingdom, and finally Berried Treasure.