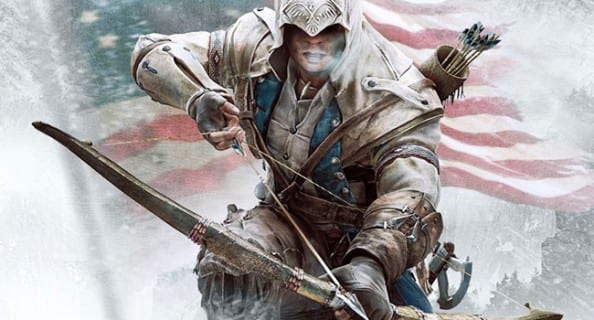 The holiday season has been on fire with some of the recent releases, and it is very clear that this is the year of Assassins!   Well, the king of the pack is ready for his next outing – I’m talking, of course, about our new Native American Assassin, Connor in the upcoming Assassin’s Creed III.   Today we have a new trailer that goes over some of the cool weapons we’ll see in the game.   The rope dart caught my eye during my E3 demo as he hooked a British soldier and then slung him from a nearby tree without so much as a sound.

As Connor, you’ll unleash your predatory instincts to stalk your enemies and devastate them with all new weapons including tomahawks, rope darts, firearms, bow and arrows, battle axes and more. In this Assassin’s Creed III Weapons Trailer, watch as the newest master Assassin destroys his opponents using any means necessary – and keep an eye out for his hidden blade as a whole new combat system delivers more intense, gut-wrenching battles than ever before.

Set against the backdrop of the American Revolution in the late 18th century, Assassin’s Creed III introduces a new hero, Ratohnhaké:ton, of Native American and English heritage. Adopting the name Connor, he becomes the new voice for justice in the ancient war between the Assassins and Templars. Players become an Assassin in the war for liberty against ruthless tyranny in the most stylized and fluid combat experiences in the franchise to date. Assassin’s Creed III spans the Revolutionary War, taking gamers from the vibrant, untamed frontier to bustling colonial towns and the intense, chaotic battlefields where George Washington’s Continental Army clashed with the imposing British Army.

Given the incredible deluge of awards slung at this title during E3, and the demo on multiple platforms (Including Wii U), I have VERY high hopes for ACIII.   Look for it to hit shelves on October 30th for Xbox 360, PS3, and PC, with the game launching day and date with the Wii U’s release.