Apex Legends Emergence brings even further destruction to its World’s Edge map as well as a new legend, weapon, battle pass, and skins.

This version of World’s Edge looks to have more snow and lava, doubling down on the extreme climates the map is home to. Replacing the Refinery point of interest is the new Climatizer, a larger POI with more loot and interiors and exteriors that support close and long range battles respectively. Sorting Factory has sunken into a lava pit, to be replaced by Lava Siphon, which will be home to much more chaotic fights as well as a new rotation to the train tunnel behind. Train Yard is gone in the update, replaced by Landslide, a POI that does away with the many train cars that hung overhead and provided a huge advantage to teams holding them. There is almost as much loot in Landslide as there was in Train Yard, and the redesign is meant to provide more clarity in fights. Some spots that have not been touched for a while are getting new rotation points as well, including Overlook and Geyser. Lastly this map update brings Gondolas, which are essentially cable cars that traverse across large portions of the map (similar to the old train in World’s Edge), and skybox changes. Here, the lighting will be blue but some of the orange hue that has dominated World’s Edge since season 4 will still be present. 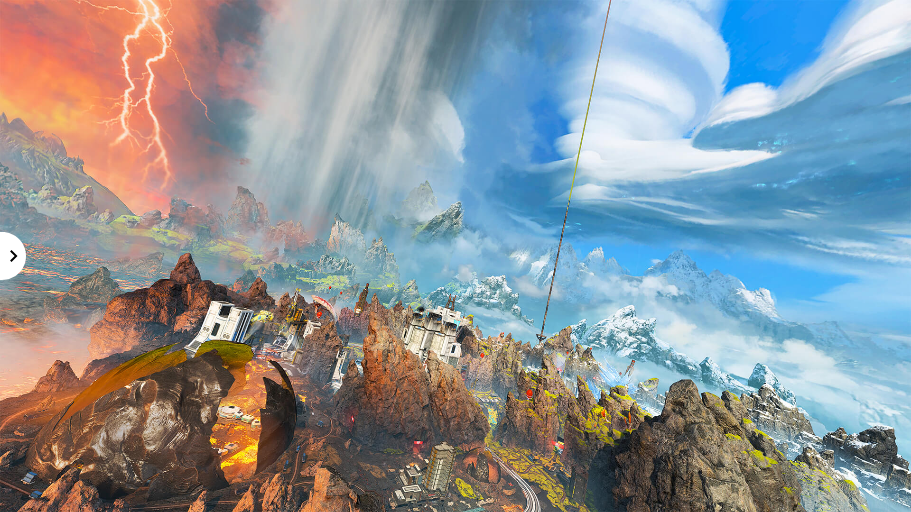 The trailer also provides a first look at the new legend’s abilities, and he already looks strong. With the abilities to see footprints through walls (unclear if this was due to his ultimate or his passive which has previously been described as a heartbeat sensor) and track enemies with his tactical, he will be a vital recon character from the start.

For a more in-depth breakdown of Seer’s abilities, read our article here.

Rampage, the new LMG coming to the Apex games, can be charged similar to a Sentinel for extra power. Instead of using shield cells, however, it consumes thermite grenades that give it the power to break down doors when charged. Also, it has as an unobtrusive iron sight which is always nice when it comes to new Apex weapons. Fuse might actually be a great choice to pair with this LMG due to his passive ability to double-stack grenades.

For the past few seasons, Apex Legends’ battle pass has featured two skins at the end that react as the player deals damage and gets kills. The weapon getting the reactive skin treatment this season is the Volt, for a good look at it, skip to the 2:10 mark in the video above. Featuring spider-like legs that constantly extend and contract, as well as a nice color scheme, the weapon looks great. Though, all of its style may add considerable visual clutter in moment-to-moment gameplay.

Stay tuned to Gaming Trend for more news on Apex Legends and all things gaming.