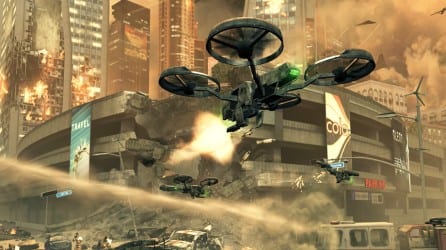 The upcoming release of Call of Duty: Black Ops II was announced today, and the game is set to deploy on November 13th. The announcement didn’t come as much of a surprise; Amazon and other online retailers had made the game available for pre-order around midnight, setting the Call of Duty fanbase abuzz. The original Black Ops was released in 2010, and set in the Cold War era. It’s sequel will venture into new territory for the franchise by being set in 2025 instead of based on modern or historical conflict. More detail can be found in the reveal trailer below. Activision’s CEO commented on his hopes for the game:

“Hands down, this is the most ambitious Call of Duty ever,” said Eric Hirshberg, CEO of Activision Publishing. “We are bringing disruptive innovation to the franchise and we are doing it on several fronts. We’re pushing the boundaries technologically, graphically, and from a narrative and gameplay perspective. At the same time, we need to stay true to the epic realism, authenticity, heart pumping adrenaline, and cinematic action that so many people love and expect from a Call of Duty game. Treyarch’s vision for Call of Duty: Black Ops II will redefine the Call of Duty franchise for the future–both literally and figuratively.”

The head of Treyarch, who will again be developing the game, had this to say:

“With Call of Duty: Black Ops II, the team is crafting an experience that Call of Duty fans have never seen before,” said Mark Lamia, Studio Head for Treyarch. “We are challenging assumptions on every front, with the single player campaign, Zombies and multiplayer.  In the campaign, we are creating a thought-provoking story that introduces branching storylines and meaningful choices that impact the narrative. Running in the multiplayer engine for the first time, Zombies gives players a bigger and more diverse set of gameplay experiences, as well as entirely new ways to wage war with the undead. And in multiplayer, we’re embracing all skill levels and play styles to give players more ways to engage. With Call of Duty: Black Ops II, we’re all in and we won’t rest until we’ve launched nothing less than the best Call of Duty we’ve ever made.”

Although set in the “near future”, the game is expected to feature advanced technology including robotic devices, drones, and other futuristic weaponry. In another first for the Call of Duty series, Black Ops II will have a campaign with branching storylines, based on player actions. The plot will focus on a cold war between China and the United States, with gameplay going as far back as the 1980s to set up the origins of the conflict. Call of Duty: Black Ops II will be released for PS3, 360, and PC. Check out the reveal trailer: