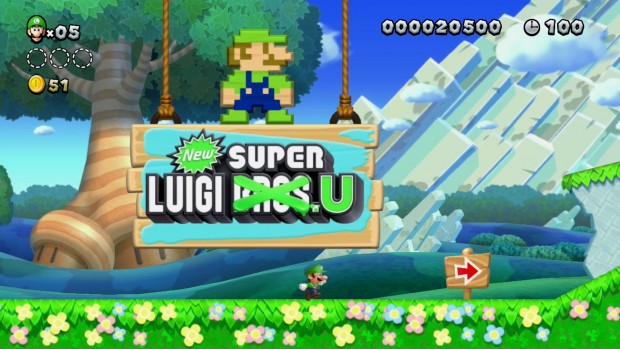 The inaccurately named “New” series of Super Mario Bros. games aren’t exactly known for their innovation or challenge. They’re solidly built games in their own right, but they haven’t really pushed the platforming envelope. Outside of a handful of levels, most of the challenges presented in New Super Mario Bros. U aren’t exactly taxing if you’ve played a Mario game within the last decade or so.

New Super Luigi U aims to change all of that.

[singlepic id=13859 w=320 h=240 float=left]Nintendo is fairly new to the DLC market, with only a few titles on the 3DS getting any additional content outside of the main game. Both Fire Emblem: Awakening and New Super Mario Bros. 2 offer players a few additional challenge maps for a small fee, granting fans just a little bit more game, even if it’s fairly insubstantial. New Super Luigi U represents Nintendo’s attempt at creating a sweeping addition to one of their major console releases, and it’s a resounding success.

If you found New Super Mario Bros. U a bit too easy, Luigi will be sure to show you the pain. Reusing the same assets and the same overworld map, New Super Luigi U remixes each of the levels from the original Wii U game, upping the difficulty considerably. Rather than easing you into its challenges and obstacles gently, you’re thrown to the wolves — or Goombas — right away, and it only gets harder from there.

Further ruining Luigi’s day is the amount of time he has to run through each level — or lack thereof. He’ll only have 100 seconds to make it through each of the 80+ stages Nintendo’s offered here. The truncated time limit ensures that levels can be tackled quickly — as soon as Luigi figures out exactly how to get past all of the spikes, rotating platforms, and massive Koopa Troopas.

[singlepic id=13855 w=320 h=240 float=right]Harder stages and a shorter time limit already make New Super Luigi U a vastly superior challenge to the far easier New Super Mario Bros. U, but it’s Luigi’s considerably different control mechanics that really make this one of the most difficult games I’ve played in recent memory. Borrowing his control scheme from Super Mario Bros. 2, Luigi doesn’t exactly turn on a dime like Mario does — he slides around the floor like his shoes have been covered in axle grease, and he hovers in the air as he kicks his legs back and forth. So not only do you have to navigate some of the roughest Mario level design since the 1980s, you’ll have to do it as you relearn everything you know about how to play Mario games.

Each of the stages are playable either solo or with up to four other friends, just like the original game. And just like the original, it’s still the ultimate friendship test — as in, hopefully you’ll still have friends after you hop on their heads and send them to their doom as you jump to a higher ledge. You’ll still have two other Toads to play as, but Mario has been replaced by Nabbit, the klepto cottontail from the previous game. He’s perfect for younger or novice players — he can’t power up with the various mushrooms or flowers he picks up, but he’s virtually impervious to all danger except for falling off the edge of the screen. He’s a great addition, but it’s a shame that he’s unavailable outside of Luigi’s DLC adventure. It’d have been great to play through the easier levels of the main game with my daughter in tow, but he’s currently stuck inside the add-on, and Luigi’s levels are way too difficult for a child her age.

[singlepic id=13858 w=320 h=240 float=left]Nintendo has found the perfect DLC balance with New Super Luigi U — it’s a fantastic addition for those looking for the challenge missing from New Super Mario Bros. U, but it doesn’t feel like content that was held back from the original game. It never gets as crazy difficult as some of those fan-made ROM hacks out there but it’s probably the closest we’ll get to that level of challenge directly from the source. If you’ve felt like some of the old-school magic has been missing from Super Mario games lately, let Luigi guide you through some of the most satisfying platform gaming ever designed.