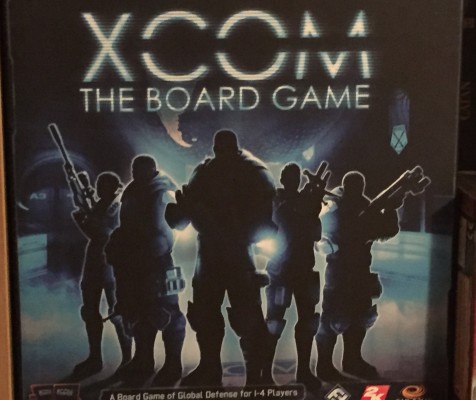 The year of 2015 had several great games, but the staff doesn’t have the ability to play all the games that everyone has reviewed. Instead of trying to vote on what each of us thought were the best games of 2015, we decided that it would be better for each of us to compile a list of the best games that we played. You might not see some games that you were expecting to see, and that’s partially because we didn’t get a chance to play them or they came out too late in the year for us to get a good look at them. However, I hope that our lists give you an idea of what was best for our own individual tastes, as well as possibly finding some gems that you might not have considered taking a look at because they were overshadowed by other releases.  These are my best, in no particular order.

XCOM: The Board Game

One of the major complaints about cooperative games is the Alpha player problem, with one person controlling the actions of all of the other players. XCOM is a much different board game experience, mostly because of the use of the app. The app controls what can be done when, and everyone has to think on their feet. One person can’t control the action because everyone needs to do their part. I really wish that a physical instruction book was included with the game, as some rules aren’t clear just within the app. However, if you want a truly unique experience, XCOM is one of the best games of 2015 to do that.

Ascension was one of the first deckbuilders after Dominion and Thunderstone. While the glut of deckbuilders has receded, Ascension keeps on going strong. Each set includes unique mechanics, and Dawn of Champions is no exception. While multifaction cards are unique to Ascension, they aren’t new in the world of card games. Each player is assigned a Champion, and as they gain reputation they gain a unique card for their specific Champion. The Rally ability to gain cards without paying for them adds some strategy and luck. I’ve always been impressed with Ascension, and Dawn of Champions is no different.

I haven’t had the opportunity to play Marvel Legendary or Shadowrun Crossfire, so Xenoshyft was my first experience with a cooperative deck-building game. It truly requires teamwork, making sure that everyone works together but making sure resources are shared for the later players in the round. The game replenishes depleted decks with new resources, and each location gives players unique abilities. However, Xenoshyft is on the level of Ghost Stories difficulty. If you can handle the brutality, Xenoshyft might be one of the best cooperative games out there.

I know that BattleLore Second Edition came out originally in 2013, so this is a bit of a cheat. However, FFG released four brand new armies and three reinforcement packs. Two of the armies came from an entirely new faction, The Undead, giving these units a new feel compared to the Uthuk Y’llan and the Daqan armies. All army packs come with new terrain tiles and scenario cards, expanding each aspect of the game. If you haven’t checked out BattleLore Second Edition, now is a great time to see the variety of the available armies.

Specter Ops is a unique game of cat and mouse, with one person playing the Agent uses a private map to track movement while the Hunter players try to catch him. The Agent leaves clues as to his whereabouts, and the Hunters have unique special abilities to even the playing field. To win, the Agent needs to move to specific points on the board and then escape off without getting caught. If the Agent is in the line of sight of a Hunter at the end of a turn, the Agent is revealed on the board. With a shorter play time than Fury of Dracula, this is the hidden movement game that should go into your collection.

When I heard that Days of Wonder was bought by Asmodee, I didn’t think that we would see any more maps for Ticket to Ride. Not that Ticket to Ride needed any more since they already had four unique expansions that added something different to the game. I was wondering how these maps would differ from all the other map packs. For the United Kingdom, new technology cards are used. At first players can only build one and two train routes in England. Technology cards allow players to claim larger routes, routes into certain areas, gain extra points for routes, and more. The Pennsylvania side adds shares of stocks that are gained when a route is claimed. The more shares a player owns, the more points are scored. While the Pennsylvania map is friendlier to newcomers, the United Kingdom adds an extra challenge to experienced players. If you are a fan of Ticket to Ride, this expansion belongs in your collection.