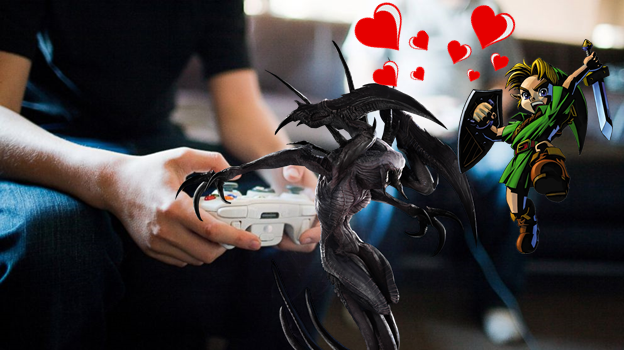 St Valentine was a third-century roman saint, a priest for the people who was said to have martyred for his faith and even helped the blind see. But what many people don’t know–and historians seemed to have missed–is that he was also an avid gamer. Everything from Pac-Man to Call of Duty, St. Valentine tore it up on the leaderboards; some even called him “St. Tore It Up On The Leaderboards.” So, in honor of this great man, we should all take this weekend to get in touch with our own patron saints–the one buried deep within our hearts–and play some damn video games. Here’s what the GT Staffers are playing.

For some reason I decided to go back and play some more South Park: The Stick of Truth. I had beaten the game when it first came out, but hadn’t touch it since. Over the last week, I’ve played through it two more times and am near 100% completion, so I’ll try to knock that out by Sunday.

My friends have also informed me that they bought a little game called Evolve. I think it’s a new Pokemon game or something; I know you go out and trap monsters, so I’m sure it’s a Pokemon game. Anyways, they’ve been heckling me to play with them, so, despite my better judgment, I’m going to pick that up today and give it a try. But I’m not holding my breath … I wonder if I could play as Charizard?

Last night I finally finished Dragon Age: Inquisition, and wow! Awesome, awesome game. But now on to other things…

Today I will finally get my hands on the New 3DS, specifically the Majora’s Mask edition, because I will be playing the heck out of The Legend of Zelda: Majora’s Mask 3D later today! Then eventually I’ll move on to Monster Hunter 4 Ultimate and some others. I also will likely do some catching up on Dying Light and also playing a lot of Evolve, which I am already addicted to.

As expected, I still haven’t started on any of the four games I promised to finish this month. Just too busy, now I really know I’m never going to be able to finish them all, haha!

Anyways, I continue to play a lot of League of Legends in my off-time. Right now I am also reading my way through the visual novel trilogy Muv-Luv. Extra was really boring so I skipped through most of it and didn’t even attempt the side-routes. Unlimited is slightly less boring, but I know that I just need to keep powering through them. Everyone tells me Alternative is the good part, so yea I hope Alternative is glorious and I’m not wasting 20 hours to play through these two boring ones.

Time for some shameless self-promotion! I finished writing and self-publishing my book! Thought I’d squeeze in here and tell you about it. It’s a book about people stuck in virtual reality, it’s a lot like Log Horizon (and the much worse Sword Art Online). You can look it up on Amazon or the Createspace eStore. It’s called Our World’s Death, and it’s the first book of a four part series called Divided Worlds. It’s available in Paperback and eBook format, whichever you prefer, so go ahead and check it out if it sounds interesting!

Time to start working on Book 2…

Wow, so I’m massively failing at my Four in February. I’ve only been able to start one of them, Persona 3 Portable, which I decided to switch out for Persona 4 in my list after talking to some Persona fans.

The reason I haven’t been playing my other games is because I’ve been playing a ton of Evolve. It’s a really interesting game, and I’m really enjoying it. We’ll have a review up soon on the site, but we wanted to make sure we got multiple viewpoints and a lot of “real-world” experience on the game. I might also write up a piece about the game itself. It asks a lot of a playerbase that doesn’t normally care about things like character class synergy, teamwork and communication, and that makes it either a really fun or really terrible game to solo online.

I’ll probably just be playing more of Evolve this weekend, along with Persona 3, and probably some Dota 2 for the Year Beast event. Bought the arcana, so I gotta use it, right?