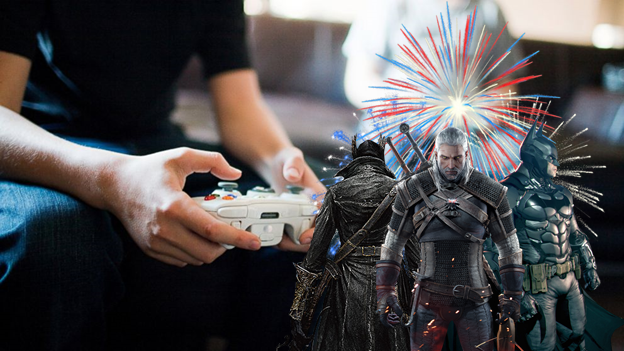 Another year over and a new one just begun. Hopefully everyone had a wonderful holiday season with plenty of quality time spent with their family and friends, but let’s get serious here. 2015 is slated to be one of the most, if not the most, incredible year of video games in history. We’ve got a lot of work ahead of us, so it’s paramount that we keep our skills sharp and not let our exquisitely-honed minds and bodies become lax after all of that holiday merriment. I’m sure most of us got at least a few games to tie us over until the first major releases of the year, so let’s play some friggin’ video games. Here’s how the GT Staffers will be training for 2015.

I’m notorious for not playing new games. I have a problem where I don’t let myself play any new game that has an earlier game in the series, a spiritual predecessor, or a game that may have majorly influenced it in any way that I haven’t played yet. That being said, I have to sit on the sidelines when all the cool kids are talking about their favorite games at the end of the year. Well not this year. I’m going to play every new, notable game that comes out. The first one on my radar is Dying Light, so in preparation for that, I’m going to play through the original Dead Island this weekend. Starting off 2015 with apocalyptic zombie skull bashing. Woot!

All this time and I still can’t seem to get enough of Elite: Dangerous. It’s never-ending bevy of content never fails to draw me in for at least a few hours every day. I just picked up an Adder and I’m determined to go out and use it’s big fuel tank to go even farther than usual. My goal, get some advanced scanning equipment and a really expensive ship. Once I’ve done that, I’m going to try and make a crazy trip to the other side of the Galaxy. It’s going to take me a while… Other than that I’ve also been thoroughly enjoying Fate/Hollow Ataraxia which was translated back in November. I’ll be switching between the two games depending on my whim. It’s certainly going to hold me over until the real heavy hitters of 2015 start dropping! I can’t wait!

Well, it’s finally 2015. Last year is over, and hopefully everyone will move on from the madness that was 2014. I’ve decided to take some time to look back through the titles I’ve missed, especially the ones that were in our deliberations for GOTY.

I’ve got myself a Vita, so I’m finally getting around to playing Danganronpa. I’m about two-thirds of the way through the first and already have the second queued up; I can see why people fought so hard for these games, they’re really amazing. I’ve got Persona 4 Golden to check out too, as I’ve heard way too much about this game not to try it out. I’m also going to finally delve into Diablo 3: Ultimate Evil Edition for the PS4. I was a huge Diablo 2 fan (and even bigger fan of one of its clones, Lord of the Rings: The Two Towers for GBA), but I heard enough bad about D3 to skip it. Now that Reaper of Souls has come in and cleaned up a lot of what made D3 bad, I’m excited to finally get back into another solid loot-based dungeon crawler. The feeling you get from seeing your character go from a weak little warrior to a walking death machine is fantastic.

I’m winding up an extremely overdue two week vacation with a few goodies.  I’m very close to finishing up my completionist run of Dragon Age Inquisition, but I’ve also been poking at Papers, Please.  I’ve also put a few hours into Sherlock Holmes: Crimes and Punishments.  I’m very surprised at just how good the game really is.  The mechanics used for connecting intuitions is pure genius.  Frogwares has been making these games for quite a while, but up till now I’ve not really latched on.  Well…they have my attention now.  It’s also very encouraging as they are tackling one of my favorite literary properties – H.P. Lovecraft’s Call of Cthulhu.  The concept art looks fairly amazing, and given the fantastic work they’ve done with Crimes and Punishments utilizing Unreal Engine 4, it should come out looking almost exactly like that.

I am also playing my least favorite game — preparing for E3.  Having done this for so long, I’ve realized that the only way to get a great location is to book very, very early.  The search has begun ahead of the mid-June sojourn to Los Angeles.