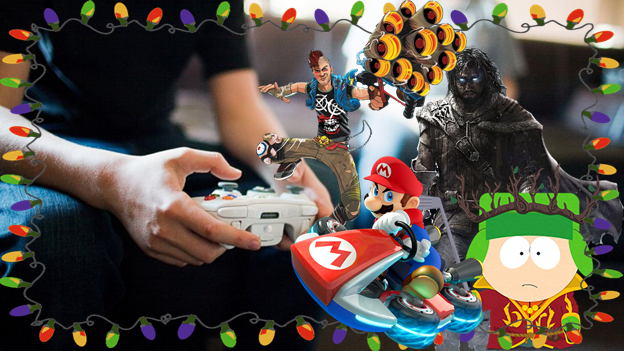 Hanukkah is in full swing, and Christmas is just around the corner. It’s time for sharing joy and laughter with our loved ones, time to take a break from the hustle and bustle of our day-to-day routines, time to relax and enjoy life. Of course, with all this time off, we have to dedicate some of it to our beloved video games. Few things are better than spending the holiday season locked away in our room, away from those annoying relatives and stresses of the season. I mean family is great and all–laughter, joy, relax, blah blah blah–but that dragon isn’t going to slay itself. Here’s how the GT Staffers are spending their holidays.

Most of my holiday love is going toward my Xbox One. Halo: The Master Chief Collection co-op with some friends, multiplayer on Call of Duty: Advanced Warfare, and 100% completing some levels on Peggle 2 (that game is my go-to for just wanting to veg out).

It’s a busy time of year, but if I can string together a solid few hours, I’d love to get started on the first Mass Effect. It’s one of the biggest games on my stack of shame, so I figure I better get to it before it gets to be too old and the graphics begin to turn me off.

I’ve pretty much given up on getting some more games onto my personal GOTY list before this year ends. I haven’t been able to play much of those games I wanted to catch up on. But a new contender for my GOTY has risen. In comes Elite: Dangerous from Frontier. If you like space sims, buy it. It’s going to take me a while to finish enough to offer a full opinion and give you a more full recommendation after all… This game is monstrously huge with a ton to do! I’m also going to playing a preview build for Grey Goo to try and offer my opinion on it. Mostly Elite though, and of course League of Legends.

This weekend, I’ll be celebrating Hanukkah in the traditional way of my people by playing the Dark Below DLC for Destiny. I gotta admit that I thought I was done for good after about a month and a half of dedicated, and sometimes frustrating, gameplay, but somehow they’ve hooked me again. So far, the improvements address a lot of the more glaring issues with Destiny, while others persist. Anyway, I need to defeat Crota (I got really close last weekend), so that’s what I’ll be playing.

And you know, if I get around to it maybe finish up Dragon Age Inquisition, GTA V, or get some Halo: Master Chief Collection playtime in. Also, I’m re-playing the Ace Attorney trilogy on the 3DS, which is absolutely amazing.

The holidays have long been a time of more game buying than game playing for me. However, this is also the first year in recent memory when a Bioware game launched so close to the turn of the calendar, and a open world title at that.

So in between jogging sessions of  across the plains of Thedas, I will probably break it up with a few rounds of Destiny (a persistent guilty pleasure for several of the GT staff) or COD: Advanced Warfare (because Kevin Spacey). Thusly giving myself a healthy weekend diet of immersive, fantasy, drama and passionless, gun-toting, war action. Perhaps I’ll  add a chaser of Little Big Planet 3 to remind myself how failure can be fun, and not just a chance see how well couch pillows can muffle the sound of flustered screams.