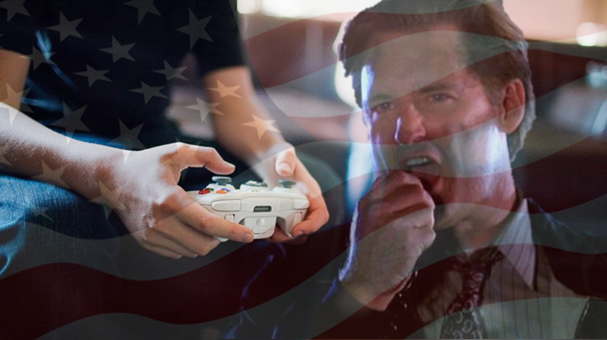 WE WILL NOT GO QUIETLY INTO THE NIGHT

The Fourth of July is a holiday when family and friends all over America get together to show loyalty to their nation by blowing shit up. But unless you’re some sort of pyromaniac, launching explosives into the sky on July 5th, 6th, 7th, and so on seems a bit superfluous. For those who want to continue their display of patriotism and prevailing joy of explosions, there are plenty of video games that can offer such an exhilarating experience without the possible loss of appendages or accidentally lighting your neighbor’s cat on fire. Here’s what the GT staffers are playing:

Light a neighbors cat on fire. Check. Loss of appendage … Is mayonnaise an appendage? Check. To me, it seems like I’ve already lived real life to the absolute fullest. I guess the only thing left to do is play video games.

This weekend will be chock-full of awesome local multiplayer gaming with my friends. Towerfall: Ascension just released on PS Plus and has been on my wishlist for a while because, let’s get real, who was playing that game on the Ouya. A little alpha-build gem called Gang Beasts is another local 4-player fighting game whose main mechanic is picking up your opponents and throwing them out of the combat area. Toss in some crazy physics and really interesting and fun level design, and you’ve got a gut-bustingly good time with a lot of “Did that just happen? moments. With a little booze to top it off, it seems like a great way to spend Independence Day Weekend.

Burning candles at both ends with work has me busier than a dog with two noses. I just pulled down Guacamelee for the Xbox One, but the backlog of games I have is going to have to wait as I sink more time into Marvel Heroes 2015.

There are games I simply WANT to play, but don’t get the chance. Transistor is collecting dust beside a host of others, and yet somehow Peggle 2 still gets some of my time.  I still haven’t really finished Watch_Dogs, and I’m only one of four chapters into Valiant Hearts. I’ve also got Super Time Force to play, which is surprisingly challenging and a heck of a lot of fun.

My Steam Summer Sale splurging came at the price of also needing to upgrade my PC, a task which further made me reevaluate the hardware status of all my gaming machines and their peripherals.

Altogether, between me and the lady, there are 14 devices which cater to our gaming addictions from across the last four or so generations. Recently we made sure they were all in working order, but working order is far from optimal, and the closer to this current era you get the larger that divide ironically becomes.
This will clearly be an on going project, but what’s currently my highest priority is my PS2, which had many awesome accessories that are now tumbling down the slope of antiquity (and rarity), and then my brand new PS4. The PS2 had two third party controllers which I dearly loved but lost to the passage of time; the Air Flow XL which blew cool air through the wings and onto your sweaty hands (perfect for long J-RPG binges) and the (deep breath) Radica Phoenix Revolution Customizable Gamepad, whose control surfaces came as separate modules so you build,swap, and create the perfect layout for each game.
The Playstation 4’s needs are a bit less eccentric. The controllers are amazing, they have a perfect heft and accurate response, but don’t power down after laying idle for a while and this can lead to a shortfall of battery life when you’re doing something (gasp) not gaming related, like Netflix. So a charging base is required for the sake of my blood pressure and by extension my controllers survivability. Nothing spoils a headshot quite the same way as a “your controller is out of battery” indication…