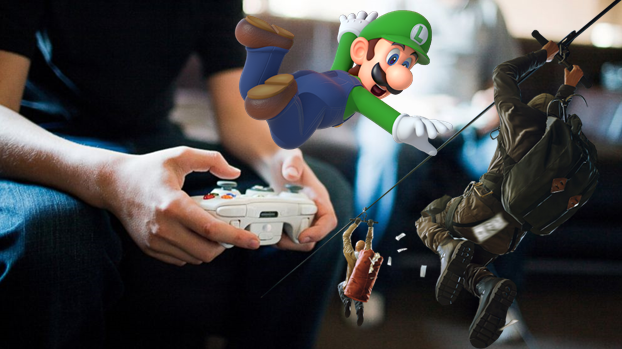 Scientists show that we have had the warmest start to a year in our planet’s recorded history, with the Northeastern United States and parts of Canada being a bitter cold anomaly. So what does this mean? It means Mother Earth is mad at us and is on the brink of losing her mind … and when she gets angry, you get out of the way. So my suggestion to you would be to find shelter within the comfort of your home and stay out of the impending, raging elements. Video games are a wonderful way to experience the great outdoors and far-off adventures without having to endanger yourself against the wrath of our world’s changing climate. Here’s how the GT Staffers are keeping safe.

I’m in the final act of Hotline Miami 2: Wrong Number, so I will be finishing up that. I dove into Helldivers with some friends last night and really dug how deep that game is. One of my friends was a much higher level than the rest of us and gave us a taste of all the awesome things to come, so I’ll definitely be plugging away at that as well. Lastly, I think this is the weekend where I finally cave and buy Dragon Ball Xenoverse. I’ve always been a huge DBZ fan, but the games never offered enough to keep me engaged. Xenoverse, however, looks like it could keep me interested for a long time.

I have so much I’m really digging playing but I can’t tell! Embargoes, man. Trust me, come Tuesday, I’ll have a lot to tell y’all about; till then, you’re just gonna have to wait in anticipation.

Besides my super secret gaming fun, I’m still playing tons of Dota 2. That game continues to amaze me with the depth in hero interaction and gameplay. I’ll also be recording a couple videos, as I’ve really started ramping up production on the YouTube channel. Quick looks at games like Besiege, Battlefield: Hardline, and some stranger, more interesting games are on their way. Stay tuned to our channel at www.youtube.com/user/GamingTrendVideos for all of the fun!

I’m currently previewing an Indie game I saw at PAX East called Toren, and I continue my obsession with League of Legends. Suddenly I seem to have found my groove and I’m soaring up the Ranked ladder. Platinum here I come! I also tried Bard, and boy do I suck at that champion. I can’t wait to see him in professional play though, guy was built for the lane-swap meta…

Not a ton else going on for me. I am however getting some solid work done on my second novel, and hope to get it finished by the end of next month. Sometimes it can be a little hard to push through the writers block though! I’m always good at the actiony/emotional parts, but when it comes to writing pushing through the parts in-between action and emotion can be difficult for me.

I kinda have a stupid amount of new games sitting on the shelf right now. This week I picked up Battlefield Hardline, Resident Evil Revelations 2, Final Fantasy Type-0 HD, Bladestorm: Nightmare, and a few others. But really all of these games are a thinly-veiled attempt to distract me until Bloodborne and Borderlands: The Handsome Collection launches on Tuesday — It’s sad, I know.

I’ve always been playing Danganronpa under direct bodily threat from some of the staff here at Gaming Trend.