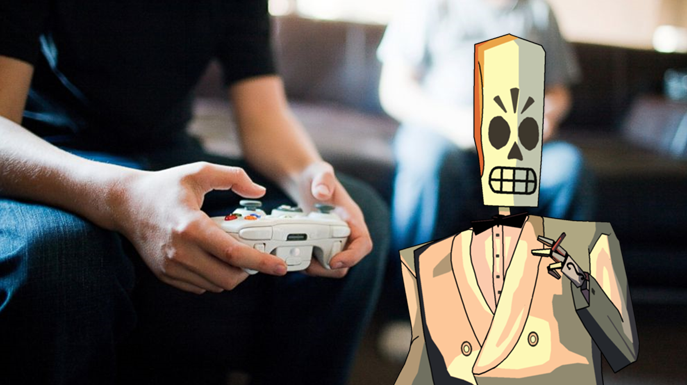 The running theme this month has been about reviving the dead. Last week we saw Resident Evil return in glorious high-definition, and this week everyone’s favorite bony travel agent rose from the gaming graves in the highly-anticipated Grim Fandango Remastered.

Gamers are also getting a chance to play one of 2015’s first major triple-A titles, Dying Light. So far, critics have been lukewarm on this parkour-infused zombie apocalypse game. But in this day and age, as long as Pewdiepie approves, the young’ns will buy whatever you throw at them.

It almost seems like October is here all over again, what with all the spooky-themed releases. January hasn’t exactly started us off on a cheerful note. But if you’re the kind of gamer who gets their kicks from anything grim, dark or deceased, then enjoy your Dia de Muertos (Day of the Dead).

It is a very busy weekend outside of the gaming world for me. With three birthdays, UFC fights, and the Super Bowl, there probably won’t be much time for gaming. Nevertheless, I will try my damndest to squeeze some gaming in. I finally got the internet in my new apartment hooked up, so I can play some Call of Duty: Advanced Warfare multiplayer. Besides that, I’ll try to sprinkle in a little gaming on my Vita or 3DS between study sessions. I’ve been wanting to start The Legend of Zelda: Ocarina of Time 3D, but I think that might be a little too involved, so I’ll maybe just chip away at some levels in Muramasa Rebirth.

PAX East. That’s what my aim is right now. Got my approval a few days ago, and I just booked my plane ticket to Boston. This will be my first con experience and I am really excited not only to go to PAX but to see fellow GTer Jay Malone in person and to see my Uncle for the first time in years. It’s gonna be a great trip.

Anyways, for this weekend I’m trying to better my mastery of League of Legends. I’m graduating to a new more complicated form of auto-attacking in the manual attack move function. As expected, I’m totally terrible with it and concentrating on the use of it throws my decision-making right out the window. Looks like I’ll be sticking to norms for the next week while I’m mastering this, but I’m confident I can do it, and I know it’s an essential skill if I want to be a better player.

I’m also exploring Guild Wars 2 in a relaxed pace. I just got out of Queensdale yesterday and am now exploring the Kessex Hills area. I don’t have tons of time for this unfortunately, as I am still filling my 1000 words per day quota when it comes to my literary works. As my novel grows closer to completion, so does my anticipation of the process, what people will think of it, and just how much cash it’ll bring in. So yea, there’s a lot on my mind… but I can handle it!

This weekend is all about Dragon Age: Inquisition. I loved Dragon Age: Origins/Awakening, and I played Dragon Age 2, and after finally breaking through the first part of the story in Inquisition I am absolutely hooked. So far the companions are better than any Dragon Age game so far, and the antagonist, whom I was recently introduced to, is awesome.

I will also likely dive into Dying Light, which I have hardly touched yet. I’m looking forward to seeing some badass parkour-pube action, and kicking some zombies in the head. I will also play a bit of Destiny, as Crota can’t seem to get enough of my Gjallarhorn in his face.

Going along with this month’s theme of revivals, I’m going to be playing through the Metroid Prime Trilogy on the Wii U (On sale for $9.99 through the weekend). Besides that awesomeness, I’m still having a blast collecting trophies in Super Smash Bros. and playing through GTA V in first person mode.

I’m going to be all over the place with my gaming this weekend, which is a welcome change of pace now that I’m finally off of Destiny. I won’t go too much into detail about it, but let’s just say this will be the first weekend in a long time that I won’t be buying exotic gear from Xur and collecting helium coils on the moon. It’s great to finally be back!