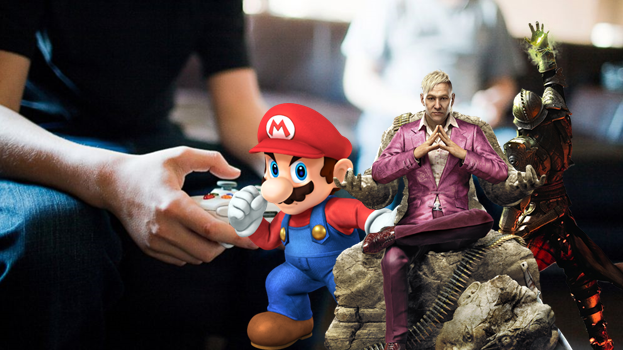 The weekend before Thanksgiving I thought it would be appropriate to mention all the things we’re thankful for. I’ll go first. I’m thankful for all the friggin’ games that came out on Tuesday. Holy crap. Dragon Age: Inquisition, Far Cry 4, Grand Theft Auto V, Little Big Planet 3, and many more. We’re talking hundreds of hours of jet-flying, car-stealing, wing-suiting, jungle-burning, sword-wielding, dragon-slaying, level-creating, cutesy-platforming goodness. The video games fall season is in full swing. It’s a celebration bitches! Here’s what the GT staffers are playing.

I’ve been on a gaming break for a little while as I’ve been knee-deep in school work, but with the bulk of that out of the way this weekend is going to be a gaming weekend for sure. I’ve got to pick back up from where I left off in both Assassin’s Creed IV: Black Flag and Watch Dogs. I love both games, but I know that I’ll soon burn out on their very similar open world structure, so I’m thinking about getting into Hearthstone for the first time to break up those longer play sessions.

While I did play it for review, I have been playing quite a bit of This War of Mine so I’ll be playing some more of that. Plus, I finally got my hands on Dragon Age Inquisition and I’ll practically be spending every waking moment in Thedas. See you when I come up for air.

Know all that gaming I planned to do last weekend?  I didn’t even power up a system.  I took a much-needed rest from reviews, games, and everything else.  There are amazing games sitting right in front of me, and I didn’t even touch them.  I got back into it this week and started cranking out reviews again, and I need to finish up our Holiday Guide this weekend, but for the most part I intend to finally dig back into Dragon Age Inquisition at a more leisurely pace.  I’m also going to finish up Assassin’s Creed Unity.

I do want to take a moment and say that, while there are certainly bugs in Unity, and yes, I’ve fallen through the world or watched as Arno turned himself inside out, most of those bugs are patched out of the game at this point.  What we are left with is a pretty decent push towards something better.  The new parkour-at-an-angle system works far better than before, having distinct buttons for parkour up and down is a vast improvement, and the graphical fidelity is certainly a big step up for the series.  It’s nowhere near as bad as a great many folks have said.  It’s sad to watch people just pile on to be the “cool kids” instead of actually…oh, I dunno…doing a damned review of the game they are actually playing.

I can feel it calling right now, Thedas needs me. Elfroot ain’t gonna pick itself. Bioware, in my opinion, has really hit it out of the park with Inquisition. My few minor concerns (M+KB controls, lack of tactics for AI companions) are completely made up for with the huge world, tons of quests, and the great conversations with advisors and companions. It’s had some of my favorite story missions of any Bioware game thus far in the mages’ recruitment mission and a siege that happens about halfway through the game. Seriously. SO GOOD.

When I’m not striking down darkspawn scum, I’ll be feeding my MOBA needs. League had its pre-season 5 update, and Dota 2 had its Foreseer’s Contract update, on the same damn day. League has a new map, new jungle camps and mechanics, and a slew of new items and balance changes. Dota 2 has a new character in Oracle, a 28 DOLLAR ARCANA SET, and a new event to go with those two that includes tons of item drops. I won’t be leaving my PC for a long, long time.

Surprising no one, I’m playing the hell out of Dragon Age: Inquisition.

I’m roughly twenty-five hours in and I’m really loving it. There was a slow start where I didn’t really care about my player character like I did in the first two games, but I recently uncovered something in the game’s story that justified the lack of early exposition on his backstory, and my investment is through the roof.

The game’s already got a death grip on me with its cast, even the ones I feel myself disliking I find endearing in their own way. I have to give special props to David Gaider on Dorian, whose personal quest really struck a chord with me. There need to be more characters like Dorian in games, but you’ll see more on that later.

Also sitting in my apartment is a copy of Super Smash Bros. for Wii U, which I would’ve loved to have come a week later when Inquisition wasn’t so fresh. I also will be picking up Pokemon: Alpha Sapphire, but that will be getting very little love with Inquisition and Smash Bros. around. I still have a copy of Freedom Wars sitting on my shelf, but I’m starting to think that may be headed to a GameStop soon, because I have no idea when I’ll ever be able to get to it.

Stefan Alexander – Staff Writer
I’m so glad it’s finally the weekend. It’s too cold where I am to be outside for long, which works for me since this is one of the biggest gaming launch weekends I remember happening in a while. I really, really want to play GTA V in first person, but I’ve been waiting since the launch of the Wii U to play Super Smash Bros. So that’s probably going to take the lead. I mean it’s one of the main reasons I bought the system in the first place. Besides that, I’ll be playing lots of LittleBigPlanet 3 with my girlfriend and having a blast! These games alone could keep me busy all weekend, too bad Destiny is still hosting the Iron Banner crucible event, which pretty much means I might need to put some coffee on cause I’m not going to be sleeping much this weekend. Happy gaming, everyone!