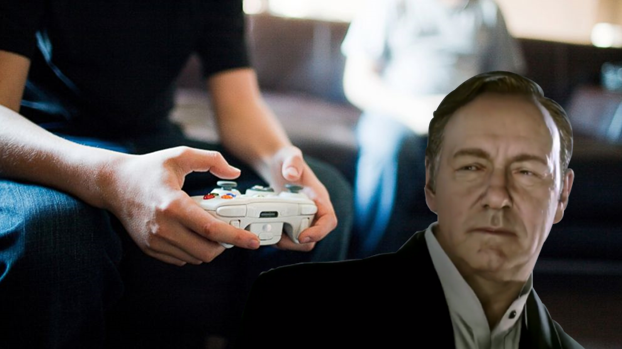 We blink ourselves awake after just having been ejected from whatever military-grade vehicle we were riding in exploded. With our ears ringing and our vision blurred, we struggle to our feet while grenades explode all around us. A Black Hawk helicopter rips through the sky firing 50 rounds per second from its M134 minigun, decimating everything in its crosshairs. A grizzly-voiced captain rouses our attention and we make a break for cover. Through fire and hell we find our way inside what once was an office building, filled with hapless business men and women shuffling paperwork and talking about last night’s TV escapades over the water cooler, now filled with the deafening blasts of gunfire and the harrowing screams of soldiers fighting for their lives.

This is Call of Duty.

Phew! Here’s what the GT staffers are playing.

Ever since the announcement of the temporary Xbox One price drop, I’ve been fighting every molecule in my body to not buy one. But I know how these things go. I’ll cave. I always do. With Sunset Overdrive, now Call of Duty: Advanced Warfare, and, by next week, Halo: The Master Chief Collection and Assassin’s Creed: Unity, the Xbox One is increasingly becoming more and more difficult to resist.

So, with those imminent purchases in mind, this weekend will be spent preparing for all those new games. I’m going to continue (and complete) Assassin’s Creed IV: Black Flag on PS4 and I plan on blasting through the campaigns for Call of Duty: Modern Warfare 3 and Black Op II. It’s going to be a knock down, drag out weekend with treasure chests full of booty and explosions.

What can I say?  You have every reason to be jealous.  I’m playing two of the most highly-anticipated games of this year — Dragon Age Inquisition and Assassin’s Creed Unity.  My weekend?  Absolutely full.    You’ll see our review for both on November 11th, but I’ll say this about Dragon Age:  You need to pre-order this game immediately.  This game is incredible, and it is absolutely worth the wait.  I don’t know what it’ll look like on previous gen, but if all of the content is there then even that should be good.  Mechanically and from a story perspective the game works pretty damned well, and even at more than 50 hours in it continues to surprise me with new gameplay elements.  How many games can make that claim?  As for Assassin’s Creed Unity, I’ve patched it and it’s sitting there taunting me….we’ll crack that open tonight.

Passing the 11th, my personal review cycle spins down by half.  I’ll have a few more reviews to tackle, but after that it’s all about getting to play the games I’ve got.   Rocksmith on the Xbox One beckons, obviously there is a huge amount of content in both of the games mentioned above, and I’ve still got Call of Duty: Advanced Warfare waiting for me.   It is a glorious holiday season and we still have The Crew in December.  Good times….

This weekend I aim to finish Sunset Overdrive, which I’m having a complete blast with. After that, I plan on doing my best to at least get a LITTLE game time in with my 10+ games that I have hardly touched, because next Tuesday my life will be over with the launch of the Master Cheif Collection.

The majority of my free time is being sunk into Persona Q: Shadow of the Labyrinth. The embargo lifts on the 20th, the Thursday before the game comes out, so look for our review then. However, I did just pick up a copy of Freedom Wars for the Vita which I plan on getting to after I’ve finished Persona, as I haven’t been using my Vita much since Danganronpa 2. My goal is to have both games done before Dragon Age: Inquisition comes out so it can have my undivided attention. Cause, you know, I’m not already constantly thinking about how excited I am for that game all the time anyway.