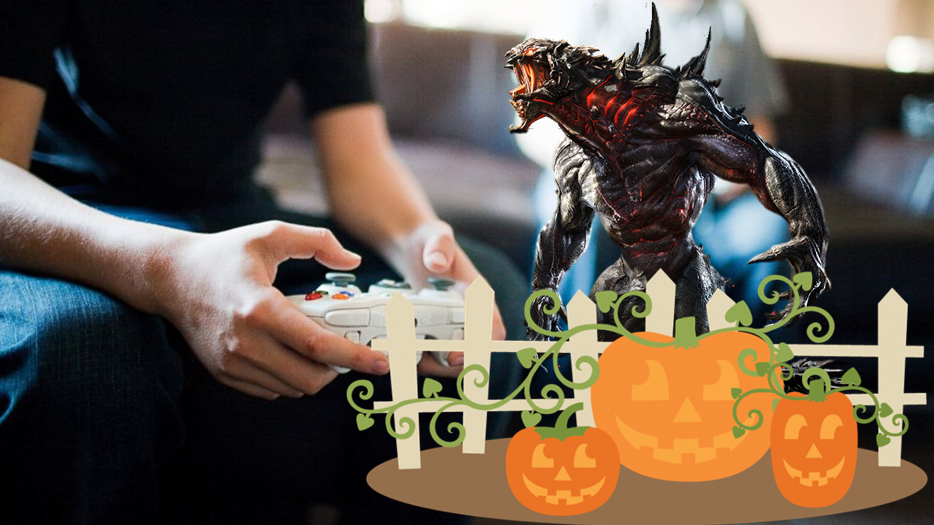 Tonight the dead will rise. The spirits will haunt. And all manner of devilish creatures come out from the darkness to wreak havoc on unsuspecting souls. But worst of all, there are a whole lot of nasty children running around throwing eggs and toilet paper all over everything. Be smart. Be safe. Stay indoors this Halloween weekend. Cozy up on the couch with your favorite scary video game and enjoy being absolutely terrified while in the comfort of your own home. Whether its running for your virtual life from the iconic and menacing Pyramid Head or turning the tables and chasing down those poor, naive Hunters as an imposing monster in Evolve. This Halloween there is something for every horror fan to get into.

Friday I’ll be at a Halloween party and I’m told there will be plenty of food, alcohol and Rock Band … a combination I haven’t experienced in a good, long while. Saturday, after I shake off the layer of grime from the night before, I’ll be jumping into as much of the Evolve Big Alpha as I can possibly play. There is an extremely good chance that I will not go to sleep that night, go to work Sunday morning, and then come right back and continue playing until 2K says, “That’s enough.”

This weekend I’ll be diving into the Evolve Big Alpha, which I already tried out for a few hours last night. Keep an eye on our website for our team’s impressions!

I’ll also need to make more time to play Sunset Overdrive, Lords of the Fallen, and the existing pile of games that I haven’t even begun to play…It’s gaming season, alright!

If my backlog of review items is any indication, Travis is right — it is gaming season.  I’ve got the Evolve Big Alpha to tinker with, I’m helping David with his Halo Master Chief Collection, I’m reviewing a few pieces of hardware (the Woojer and a third-party XB1 controller), and I have a few special things that I’m working on as well.  If you’ve not heard of Ukiyo-e Heroes, you should stop what you are doing right now and check out this page.  I’ve ordered several of these for my office walls, and I’ll be sharing my thoughts on them, as well as some nice high-resolution shots of them once I get them framed up properly.  In short, they are amazing and totally unique — I can’t recommend them highly enough.

I also have a pretty lengthy preview for Dragon Age Inquisition to finish up, complete with all new footage (I know it’s new because I captured it myself!) and an interview with Mark Darrah, Executive Producer of the Dragon Age franchise.  Cutting to the chase, if the next 144 hours are like the first six, this game may blow every other game this year out of the water.  Yea…it’s that good.

It’s also Halloween, as you might have noticed.  The wife and I are going to a party tomorrow night.  I’ll be dressed as the Phantom of the Opera, and she’ll be going as Christine Daaé (not the disturbed chick with all the blood — that’s a different film).  My wife is a huge fan of that production and she has been wanting to dress up as the pair for a very long time.  She’s been practicing realistic burn makeup (7 seasons of Face Off and a whole lot of YouTube helps) so people can yell this at me: