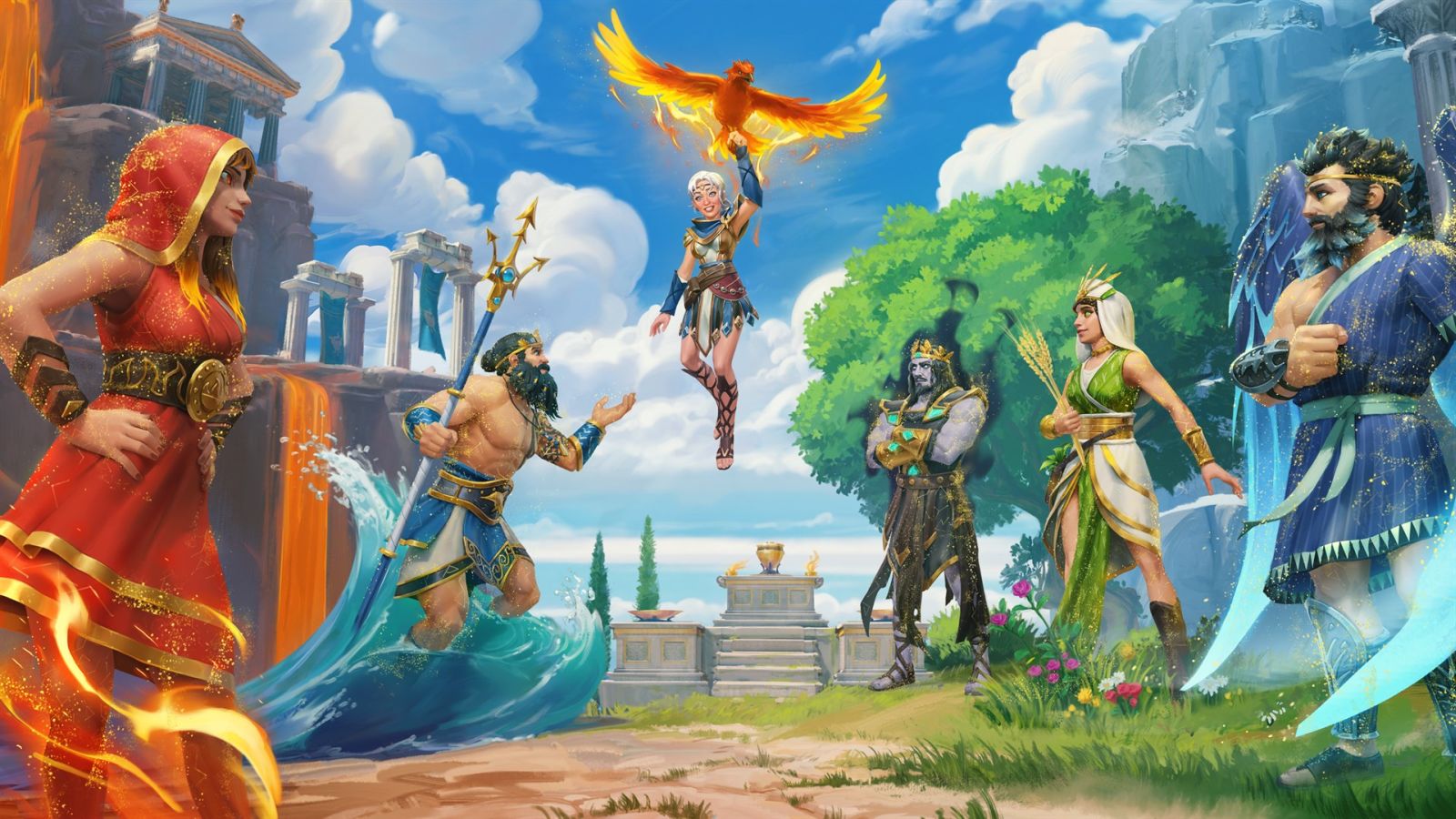 One of the things I appreciate most about Ubisoft is that they are willing to try new things. While you can clearly see the inspiration behind Immortals Fenyx Rising (our review), the game represents the team doing something outside of their comfort zone. Logic and platforming puzzles aren’t normally in their wheelhouse, but it’s easily one of the best parts of this game. High speed timing-based combat isn’t their forte, but it’s right and tight Fenyx Rising. The first DLC, A New God (our review), introduced us to a recently-ascended demigod, earning her place among her new family. With a hard pivot, Myths of the Eastern Realm (our review) introduced us to a new hero and an entirely new world and pantheon of gods, with a bit of a spin on both puzzles and combat. Now we’ve arrived at the final bit of DLC. Entitled The Lost Gods, could this expansion continue the shakeup trend I’ve come to expect from team Ubi? Well, for their final performance, they’ve upended everything — literally.

The first thing you’ll notice in The Lost Gods is a completely new perspective. Moving the camera back, and shifting it to a more isometric angle, the game is now nearly top-down. It changes the feel of the game entirely as platforming, timing, and combat feels entirely different when higher and at an angle. And this perspective change is just one change of many.

Even the way you meet other gods is different. Instead of the third person close-camera conversation style, there’s a shift to a more Zelda-like panel-conversation style. They are all still fully voiced, but it’s a shift to match the perspective change. That said, rest assured that everyone is still skillfully voice acted, and with some fun laughs along the way. 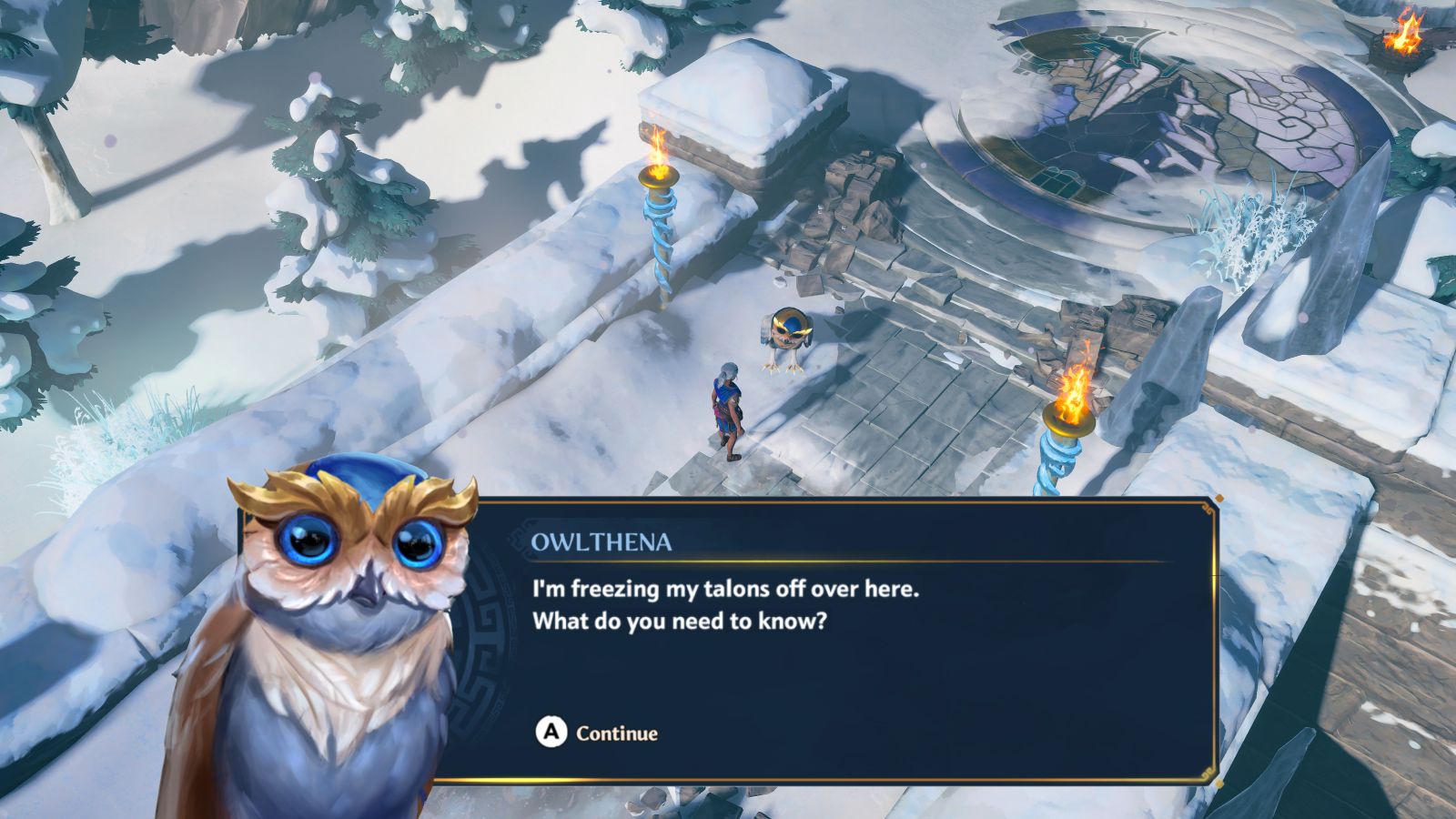 The storyline takes us back to Mount Olympus, placing us in the sandals of Fenyx once again. She and Athena believe that Zeus’s non-stop antics might have alienated some of the other gods, and they find themselves on the hunt once again for a mortal to help them out of their self-inflicted jam, settling on a new hero named Ash.

Ash is…well, frankly she’s Fenyx. New powers and fighting styles, to be sure, but the voice work and mannerisms are absolutely Fenyx. Honestly, it’s my biggest disappointment with this expansion. The team had a chance to give us another personality, but they played it safe with a little bit of copy and paste for Ash’s personality. That aside, let’s talk about how she’s different, as well as the task at hand. 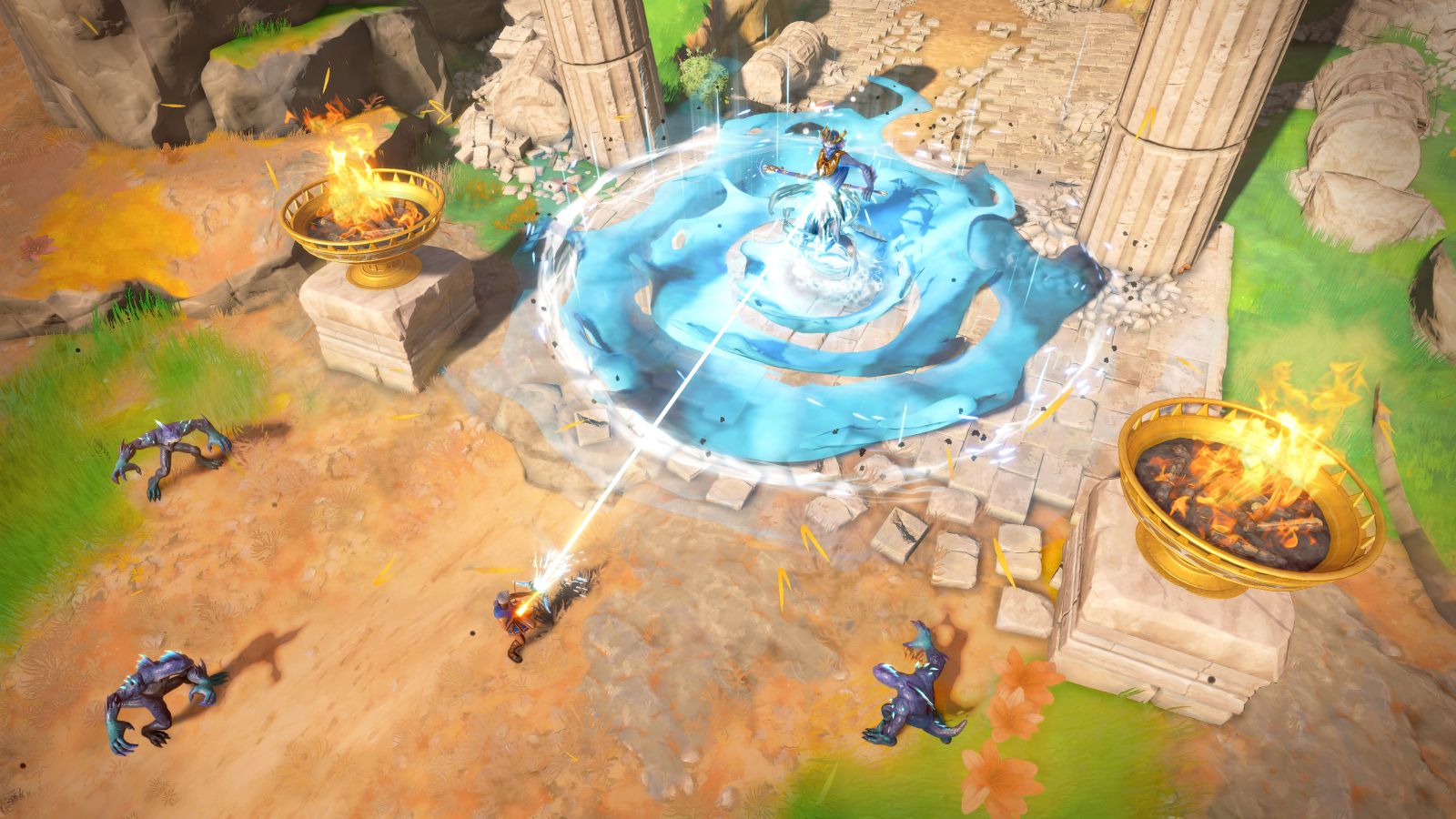 Ash has to seek out some of the big names in the Greek pantheon, such as Hades, Poseidon, and Demeter to try to convince them to come back to the fold. Obviously they’ve all got grievances with the big man at the top, and it’s up to Ash to solve them, of course. Even this, however, has seen a bit of a shift.

In the base game, as well as in the two expansions, how you tackled the world and in what order was up to you. The Lost Gods isn’t linear, but your progress is more gated by items, “miracles”, and skills this time around. Throughout the 8-10 hours on offer here you’ll unlock eleven “Heroic Gifts”, on top of the six Godly Powers from the first game. Even in the earliest moments of the game you are pushed to try new ways to tackle the world, not allowing you to progress without first augmenting your base skills into something new. In this specific example, it’s allowing you to shield bash in mid-air to get you across a particularly long jump. It was at this point that I was reminded of The Legend of Zelda, and I love it. With this simple change it tightens the narrative as it ensures the player arrives at specific points at the right time. 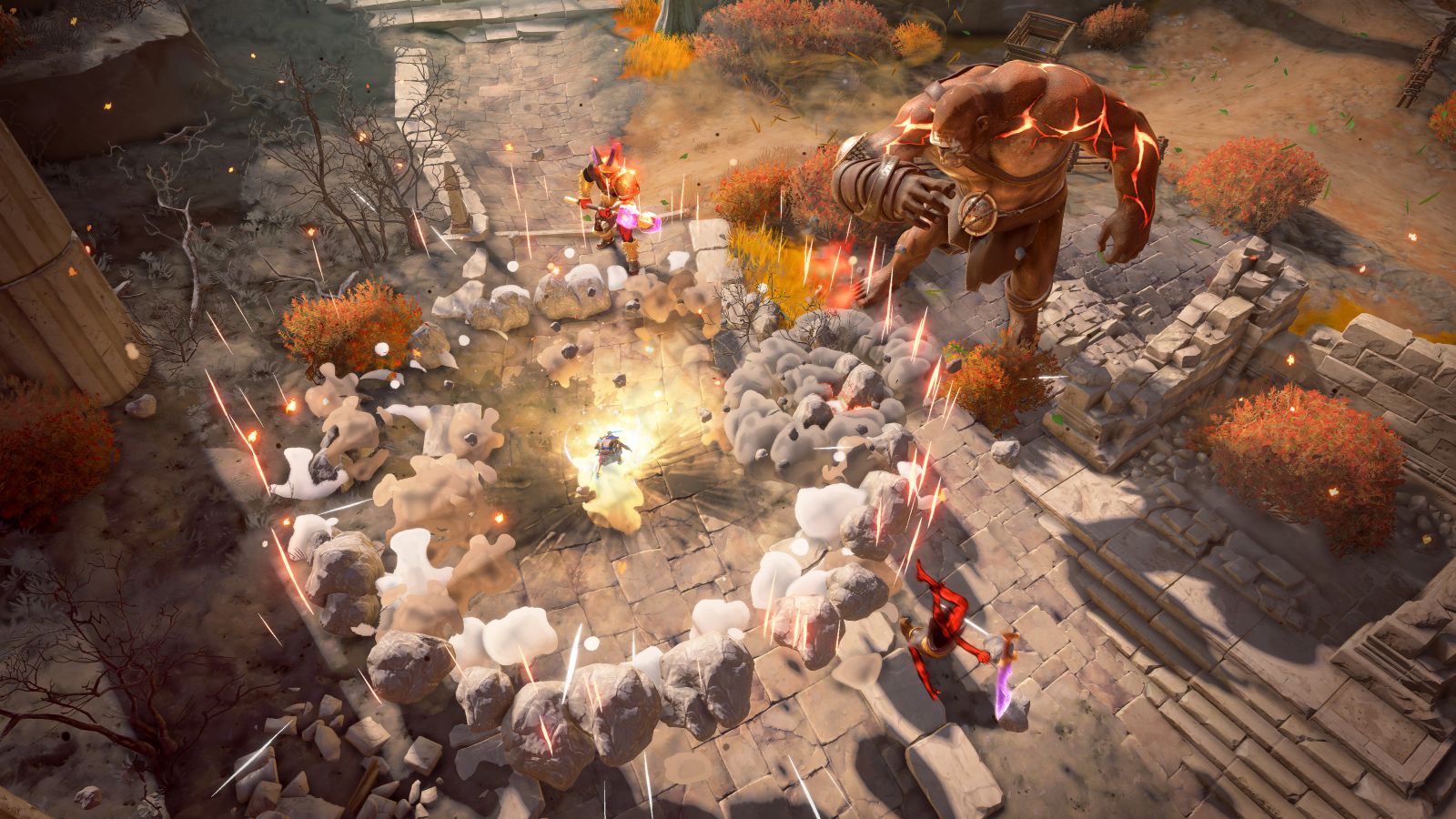 The two previous DLC installments maintained the power Fenyx had obtained through the base game, and Ku came with his own set of skills and tools to get the job done. Ash on the other hand is pretty much where Fenyx started her journey — alone and without a skill to her name. It means you’ll be slowing things way down again, grinding your way up to an appropriate level once again. After spending over 100 hours building your demigod, that can be a tough pill to swallow. Still, the changes here are varied enough that it’s not a chore to rebuild Ash’s skills over the course of roughly 8 to 10 hours.

Modification of your weapons has seen a great deal of tweaking, with an emphasis on Divine Influences. Each weapon can have four modifiers attached, granting modifiers like stamina cost reduction, and additional damage, but one level deeper is where the fun really begins. Modifiers on your weapons and armor can also change the way they function. Your shield bash that once knocked enemies back could now set them on fire, or you could mod it to allow you to shield bash in mid-air. Adding splash damage to an axe imbued with fire, and then adding freeze on parry to your armor, combined with a perk that gives you a high chance of instantly refilling your stamina, and you’ll be ripping through foes with abandon. Even the enemies labeled “Extra-Bad” (they literally have this title — obviously the humor of the base game is present and accounted for). 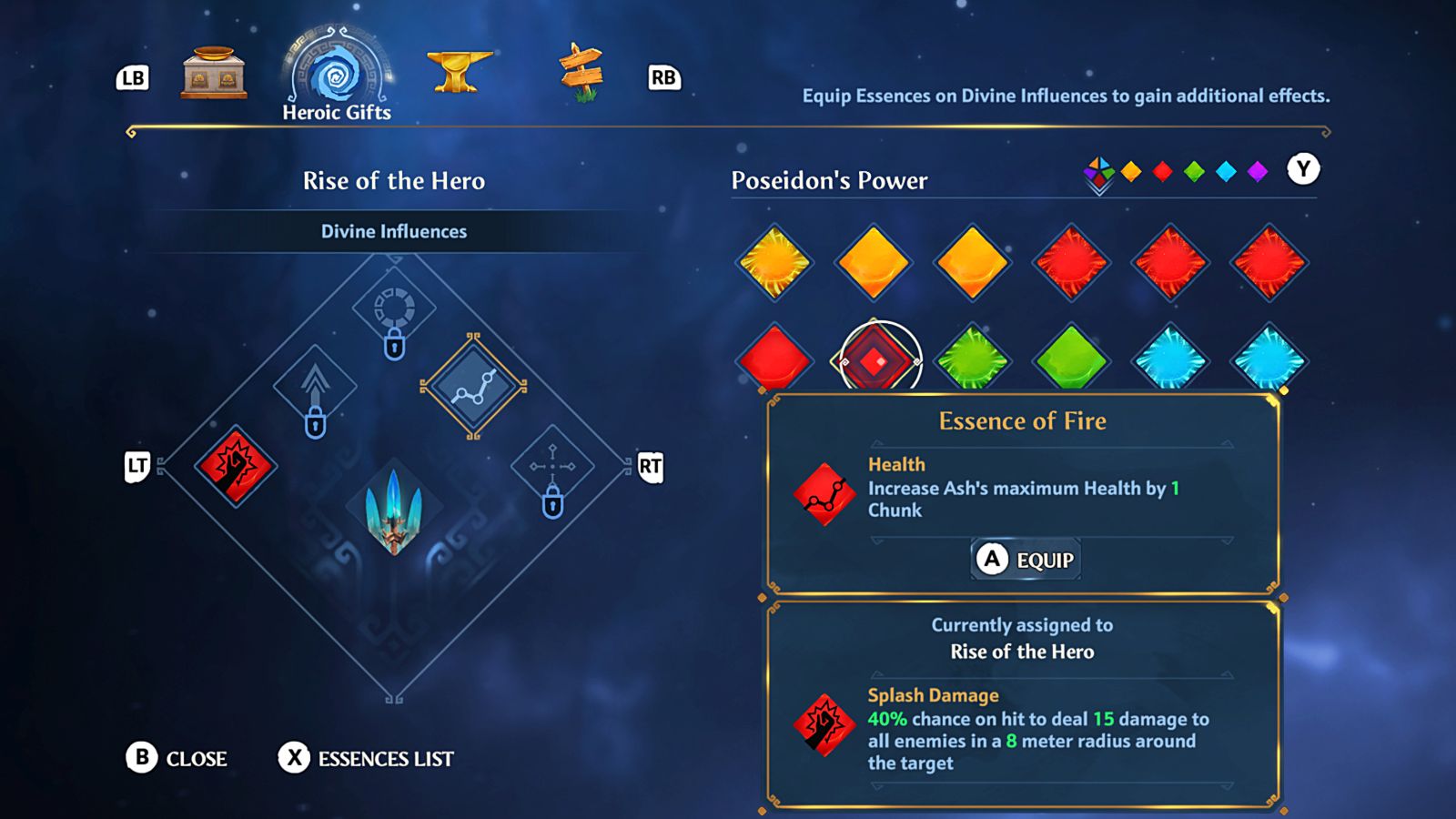 Let’s take a moment and talk about offerings, since they are a large part of this expansion pack. You need to make offerings to do some of the things that you could previously do, which includes one of my personal pet peeves — saving. Gone is the ability to save anywhere, instead requiring that you have a collection of various world drops to make this happen. It’s not a huge barrier by any means, but it’s an odd choice for a basic function. Aside from that there are some cool ones like “Cheat Death” which does precisely what it sounds like, having death “look the other way” when you would otherwise die. Still, making me pay to fast travel just feels like a cheap way to drain my bank of items.

In a surprising addition to the formula, The Lost Gods asks a small offering to advance the time of day. This respawns all ingredients and enemies (other than unique foes) so you can once again farm them for their precious goodies. It’s a change as previously you could meditate anywhere and at any time, but with enemies returning when you do, the world is a little more dangerous this time around. It’s not quite a Dark Souls bonfire, but it is a good twist to the formula. 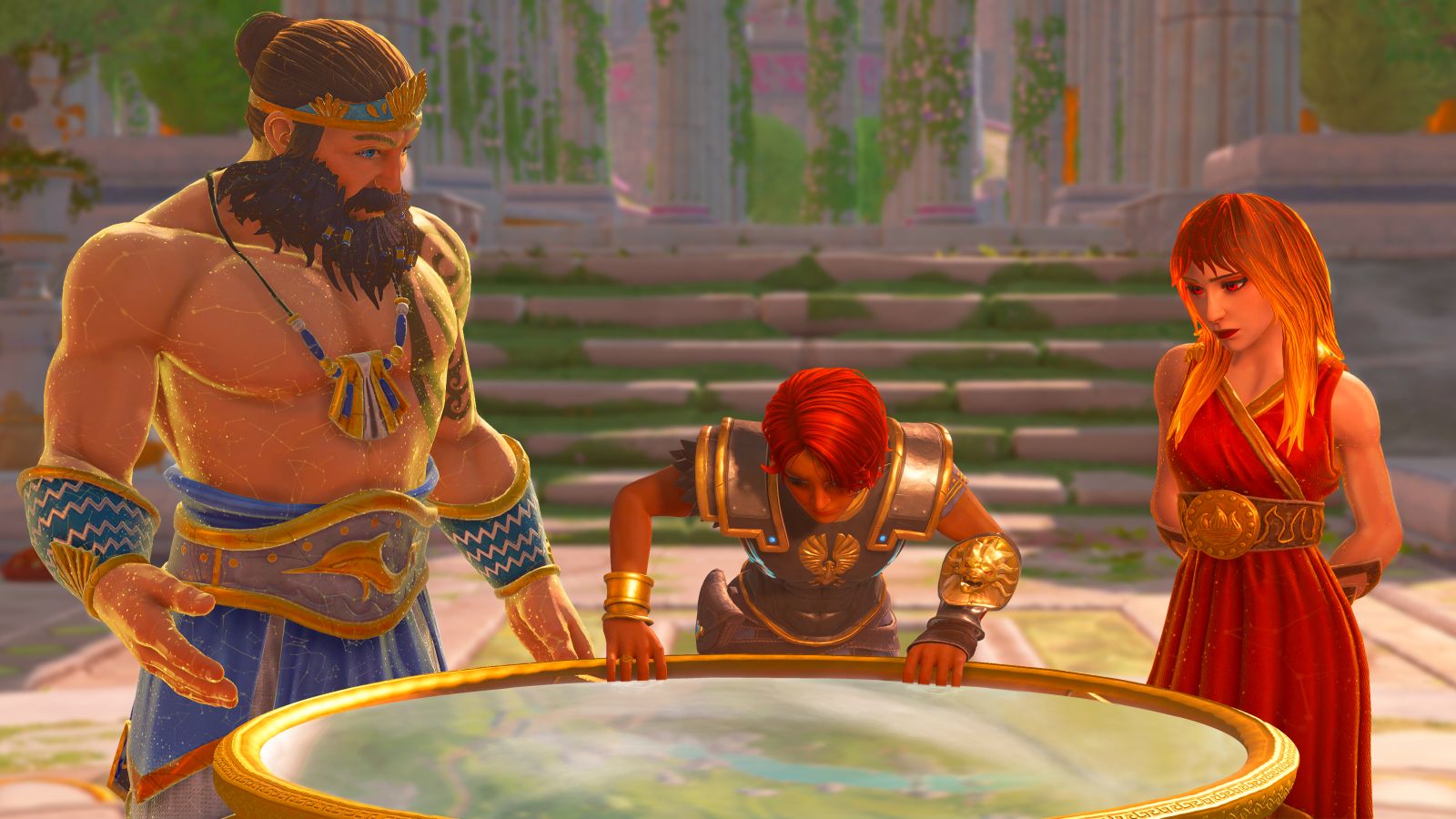 The Forge of Hephaestus also makes a comeback, offering up four upgrades to your helm, bow, armor, sword, and axe, courtesy of the same collectables found throughout the world in the base game. Beyond this, the plethora of visual customization options is present, letting you make Ash look precisely as badass as you’d like her to be. In fact, the first thing the game does is optionally import all of your cosmetic unlocks, including any you may have purchased.

If there’s a new enemy that rears its head most, it has to be the change in camera angle. While I applaud the team for trying something new, the camera angle needs to be coupled with some sort of transparency or camera shift when you bump up against vertical objects. As you fight you’ll find yourself battling against large cliffs, only to have the camera decide that you’ve seen enough and obscures Ash and her foes. It can get you swatted, or it can make jumps more difficult. I also found that I had to really adjust my timing to land some of those perfect parries. It’s not insurmountable by any stretch, but this semi-isometric view of Ash’s adventures can occasionally be problematic.

The Lost Gods gives us a completely new way to explore the world of Immortals, as well as a natural extension on the events of the first DLC, A New God. While the camera can be problematic, the charm, puzzles, humor, and brand new ways to play are worth pushing through it. It’s a great cap to the game, and the team’s willingness to try new things speaks volumes.

Ron Burke is the Editor in Chief for Gaming Trend. Currently living in Fort Worth, Texas, Ron is an old-school gamer who enjoys CRPGs, action/adventure, platformers, music games, and has recently gotten into tabletop gaming. Ron is also a fourth degree black belt, with a Master's rank in Matsumura Seito Shōrin-ryū, Moo Duk Kwan Tang Soo Do, Universal Tang Soo Do Alliance, and International Tang Soo Do Federation. He also holds ranks in several other styles in his search to be a well-rounded fighter. Ron has been married to Gaming Trend Editor, Laura Burke, for 21 years. They have three dogs - Pazuzu (Irish Terrier), Atë, and Calliope (both Australian Kelpie/Pit Bull mixes).
Related Articles: Immortals Fenyx Rising: The Lost Gods, Let's Play
Share
Tweet
Share
Submit