Everyone knows the phrase “you are what you eat,” which is not something you usually think about when playing video games. Sure, games like Kirby have been focusing on eating enemies and using that to your advantage for years, but how often do games include aspects like calories, fat, and protein? Bite the Bullet takes an interesting step forward by not only making eating a big part of the gameplay, but paying attention to calories, fat, and protein become important as well. With some Metroidvania-like level design, 2D run-and-gun platforming gameplay, and an emphasis on eating, Bite the Bullet offers a tasty meal that gives you enough to chew on.

The story revolves around you playing as either a male or female mercenary of Darwincorp, a company that collects and preserves as many living specimens as possible in their compendium. In a sense, it feels almost like a museum of sorts, but it makes sense considering the circumstances. The Earth was falling into ruin and mankind had perfected space travel, so instead of trying to save the planet, they bailed and fled into space. Unfortunately, not everyone wanted to leave Earth, so many people chose to stay behind. Those who remained slowly began to mutate and evolve in order to survive the Earth’s declining ecosystem. These people became known as ghouls, which in most cases meant they were like smarter zombies. Not only that, but they eventually evolved enough to attack Darwincorp, and that’s where our story begins. 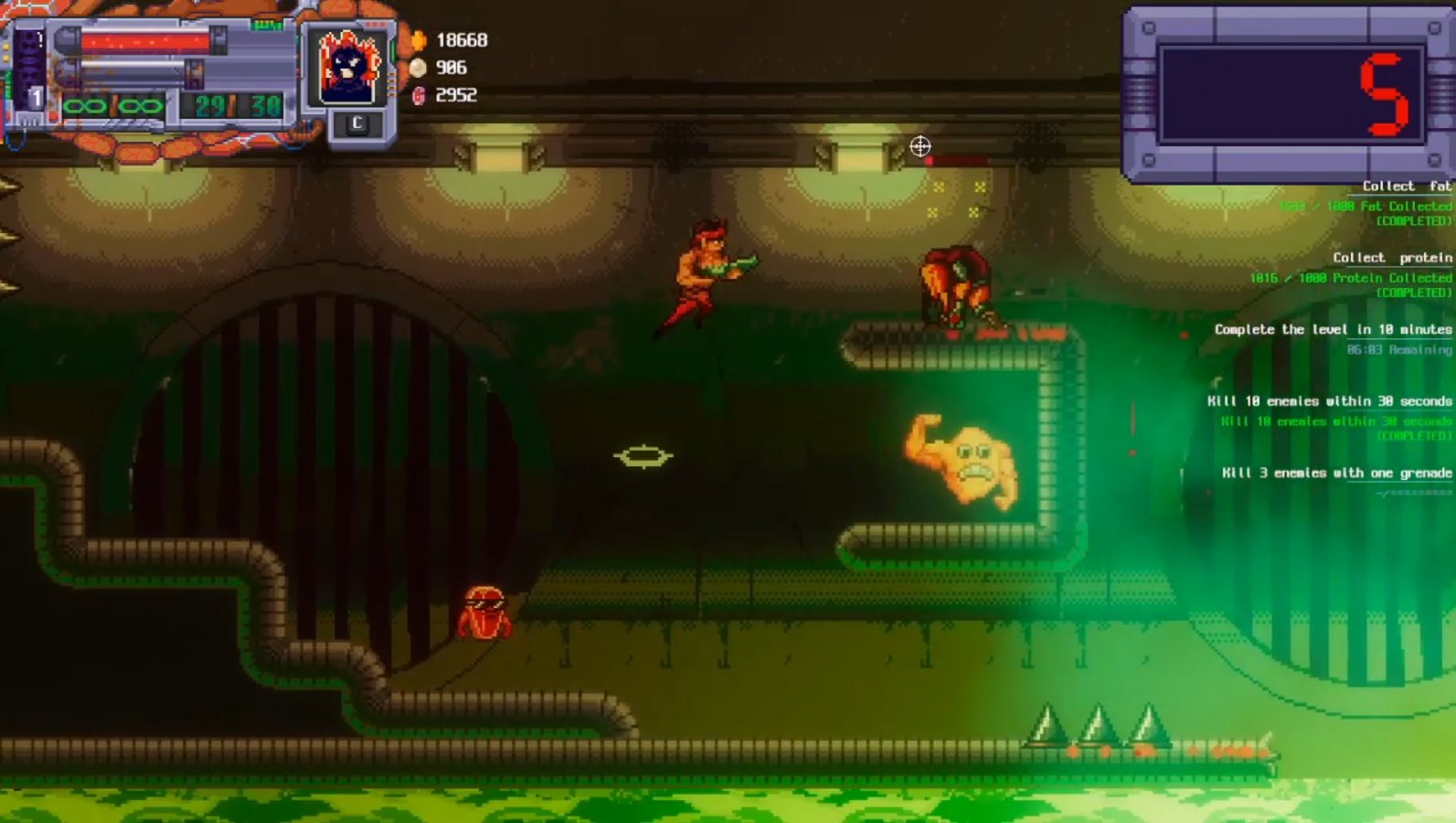 As a mercenary of Darwincorp, you are sent on eight missions to Earth to hunt down eight specific creatures who are missing from the compendium. Each mission consists of several stages where you fight your way through ghouls, robots, and all manner of other creatures as you make your way to the level’s exit. The levels are designed in a Metroidvania-like fashion where you can explore the maze-like paths however you like as you search for the exit. The map shows where you’ve already been, which is extremely helpful in the more complex levels later in the game. The exits are marked with a scale that you throw up on when you choose to leave. Yeah, it’s weird, but it plays into the eating aspect of the game. The eight missions typically have a boss that you must defeat and eat at the end. The bosses give you plenty of calories to fuel you, but you still manage to save some of their body for the sake of Darwincorp.

The gameplay follows your usual 2D side-scrolling shooter. You’ll be running around, jumping, wall-jumping, dashing, shooting foes, and eating them. You start off with your standard assault rifle, but as you progress, you’ll be able to find and collect more weapons such as a shotgun, a critter cannon, a railgun, a flamethrower, and more. One thing I love is that you aren’t limited in how many guns you can carry; you can carry one of each type and swap between them on the fly. This is incredibly useful for dealing with different types of enemies, and removes you from having to plan out what weapons to take and which ones to leave behind. 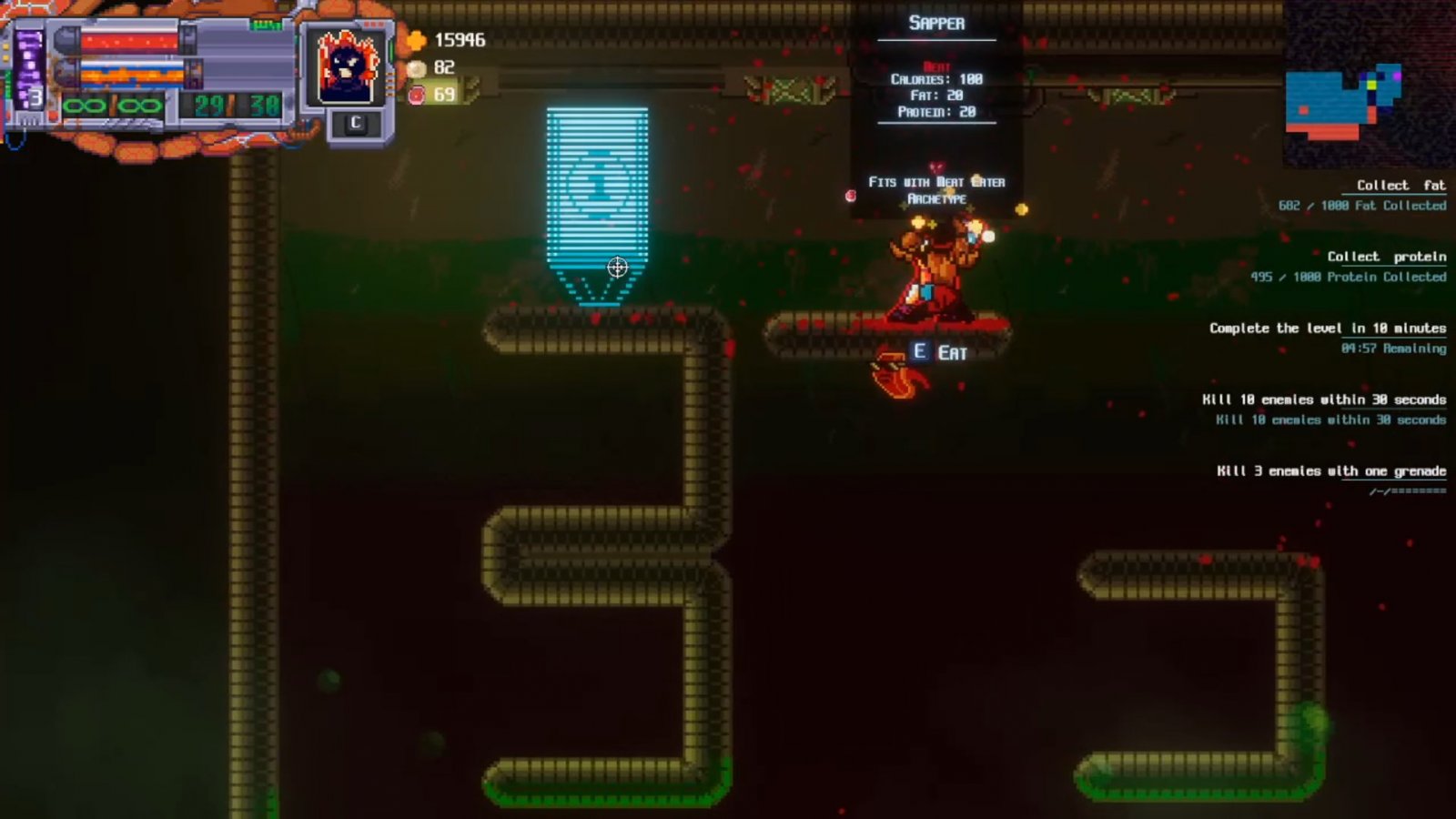 Not only that, but you can find different versions of each weapon throughout the levels and swap them if you wish. Stand over the new weapon to compare its stats with your equipped weapon before deciding if you want to swap it out or not. Some versions offer extra damage, others add a chance to burn enemies, and some may even regenerate ammo over time. Speaking of, all weapons besides your assault rifle have finite ammo, but I never ran out of ammo for any of my guns. That came from a combination of generous ammo pickups and a relatively large ammo supply for each gun. As long as you don’t go too wild with your other weapons, you shouldn’t have an issue with ammo. Also, many weapons have a secondary fire that have their own ammo supplies, the assault rifle included.

I mentioned that eating is a big part of the game, so let’s cover that now. After you damage enemies enough, they’ll get stunned for a short time, which is indicated by stars spinning around their head. Stand near that enemy to see what kind of food they are (meat, plant, or metal), if they’re infected, and how many calories, fat, and protein they provide you if you eat them. Quick note, don’t eat the infected enemies because they’ll make you sick. Actions that you take in the game, from running and jumping to using abilities that you may acquire later, use up calories. This may make you worried about keeping your calorie count up, but trust me, just play the game and each as much as you can and you’ll be fine. As of writing this review, I’m currently sitting at around 90,000 calories fueling my guy. I did focus my build around racking up calories, fat, and protein, but those perks came in the meat-eater route of the skill tree, which I’ll cover more soon. Oh, and most importantly, eating enemies heals you a bit as well. 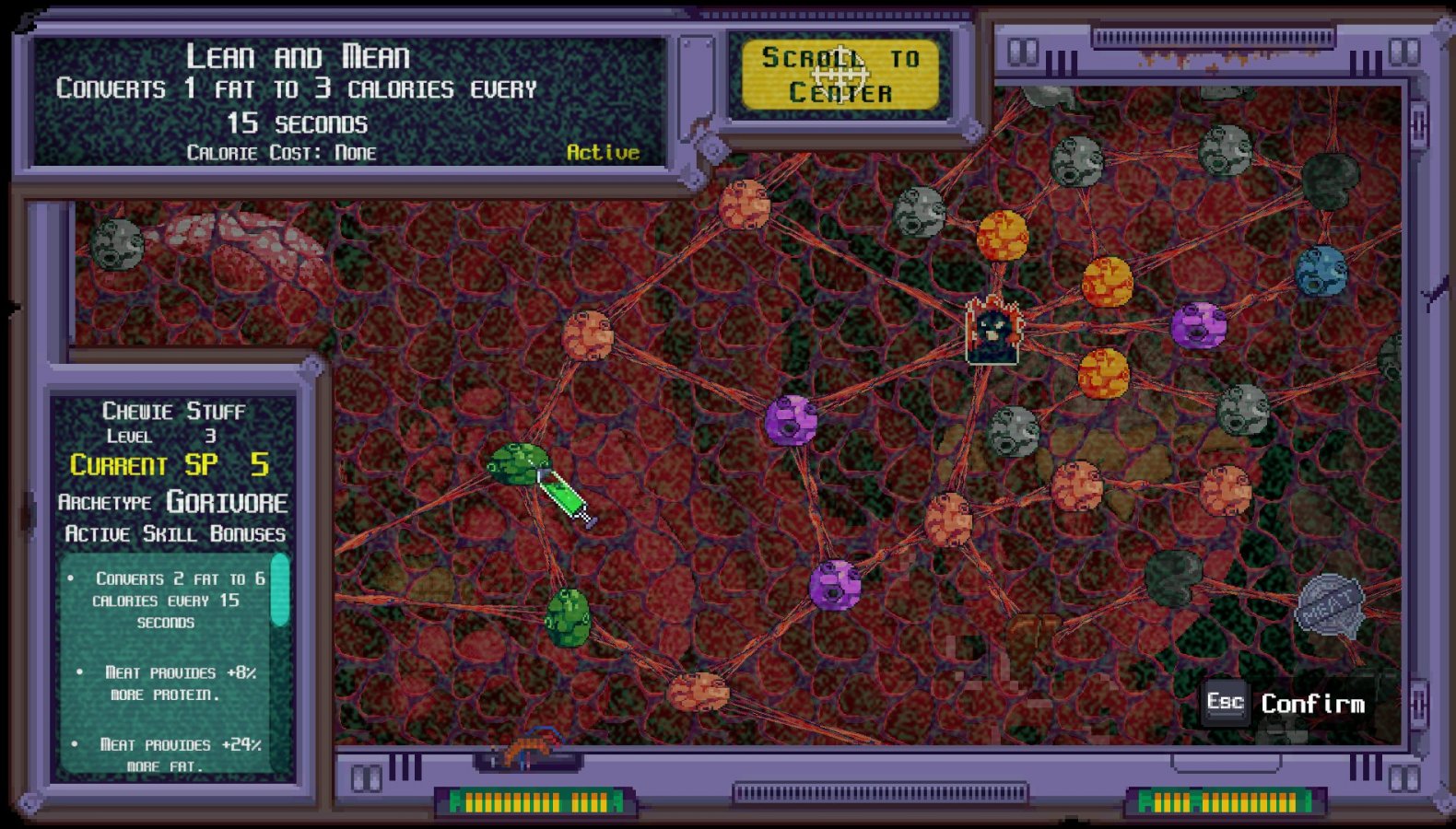 Early on in the game you’ll be able to eat anything and everything without issue, but as you level up and earn SP (experience points in this game), that may change. At the end of each level, you’ll be taken to a skill tree to spend any SP that you’ve earned in that level; any SP you don’t use gets saved for later, so don’t worry. There are several branches of the skill tree: meat-eater, plant-eater, metal-eater, all-around eater, and zombro enhancements. There’s a lot to cover, so I’ll keep it brief. By choosing one of the eating routes, you’ll unlock the chance to purchase perks and abilities that revolve around eating that specific type of food, but it comes at a cost. Once you choose a route, you can no longer safely eat other food groups. For example, if you go the meat route like me, you’ll throw up if you eat plants or metal. It limits what you can eat, but the perks you gain access to are totally worth it. The perks I focused on and loaded up on are ones that increase the number of calories, fat, and protein I get when eating enemies, along with periodically converting fat into calories, boosting my strength as I collect higher amounts of calories and protein, and much more. Abilities include turning enemies into a meat shield, launching out flaming vomit, and more.

No matter what route you choose, you’ll also have access to the zombro transformation. As you defeat enemies, you’ll fill up a purple meter in the top left corner, and once filled, you can transform into the zombro. This hulking purple zombie form temporarily swaps your weapons out for powerful melee attacks. For a limited time, you’ll move faster, hit harder, and become a powerhouse that can wipe out enemies with ease. It’s a pretty cool form, although I tended to save it for emergency situations. 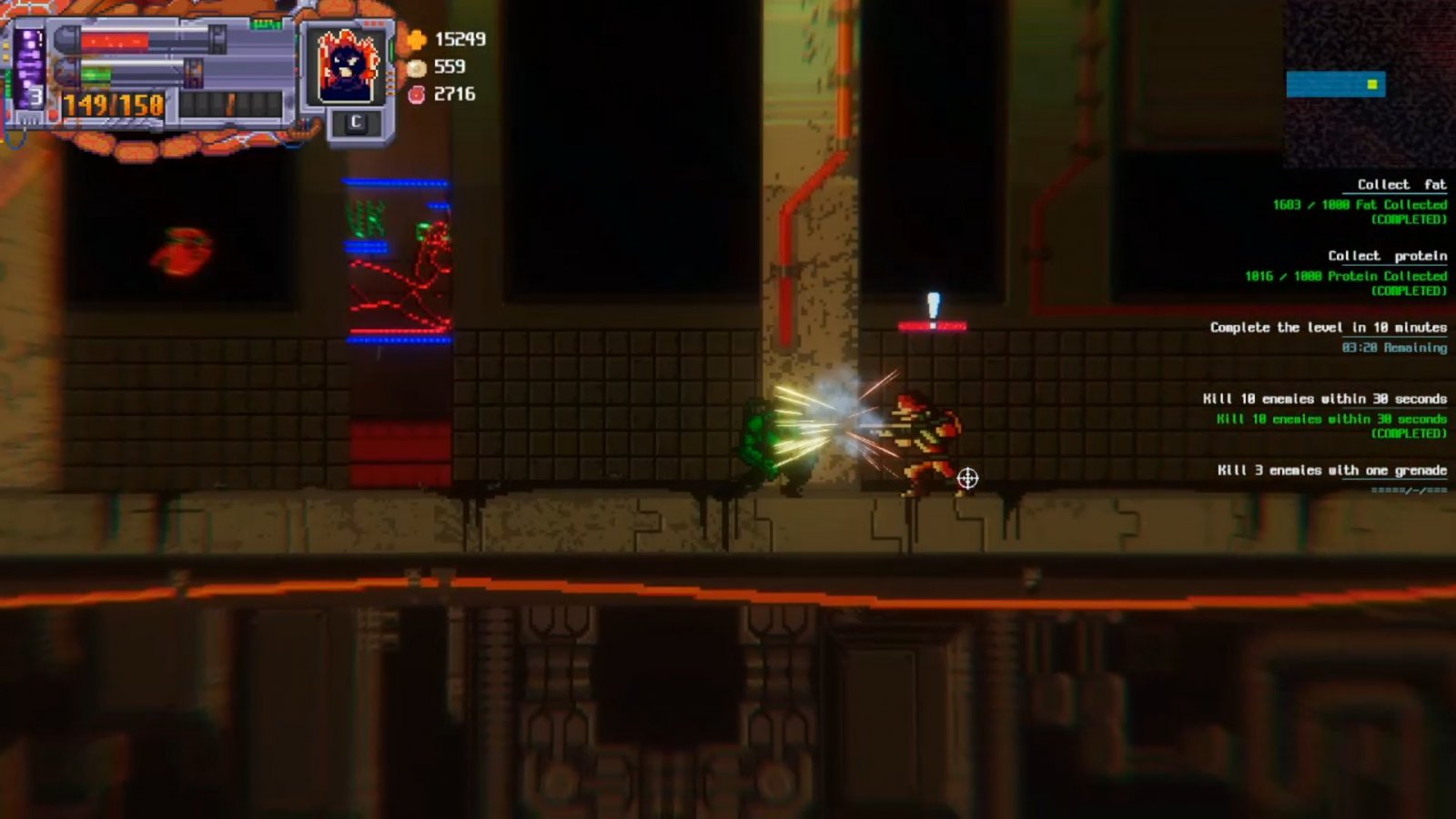 The levels are okay, but nothing to marvel at. The enemies and environments do start to feel a bit repetitive, which is a bummer, but the gameplay helps bring it back a bit. The soundtrack is good and fits with the overall feel of the game, but again, nothing amazing. In terms of difficulty, Bite the Bullet isn’t all that hard. If you get cocky and don’t pay attention to your health, you can end up dying, but you have a few respawns per mission. Thankfully, you respawn right where you died, so there’s no lost progress unless you’ve died multiple times that mission. Overall, Bite the Bullet is a fun 2D side-scrolling shooter that uses eating as a core mechanic. Setting up a build that works for you feels great, as does gunning down foes and devouring them whole. If you’re looking for a chance to snack and pack foes with lead, then Bite the Bullet may be for you.

Bite the Bullet is a 2D side-scrolling shooter with an interesting eating mechanic. Choosing your food preferences and acquiring skills based on them is neat and clever, as is managing calorie, fat, and protein intake while devouring foes. Levels and enemies can get repetitive, but it's not that big of a deal.

Codi loves to play video games and watch movies. He will watch almost any kind of movie just to experience them. His ideas take inspiration from the shows and movies he watches, and games he plays. He also loves a good pun.
Related Articles: Bite the Bullet
Share
Tweet
Share
Submit