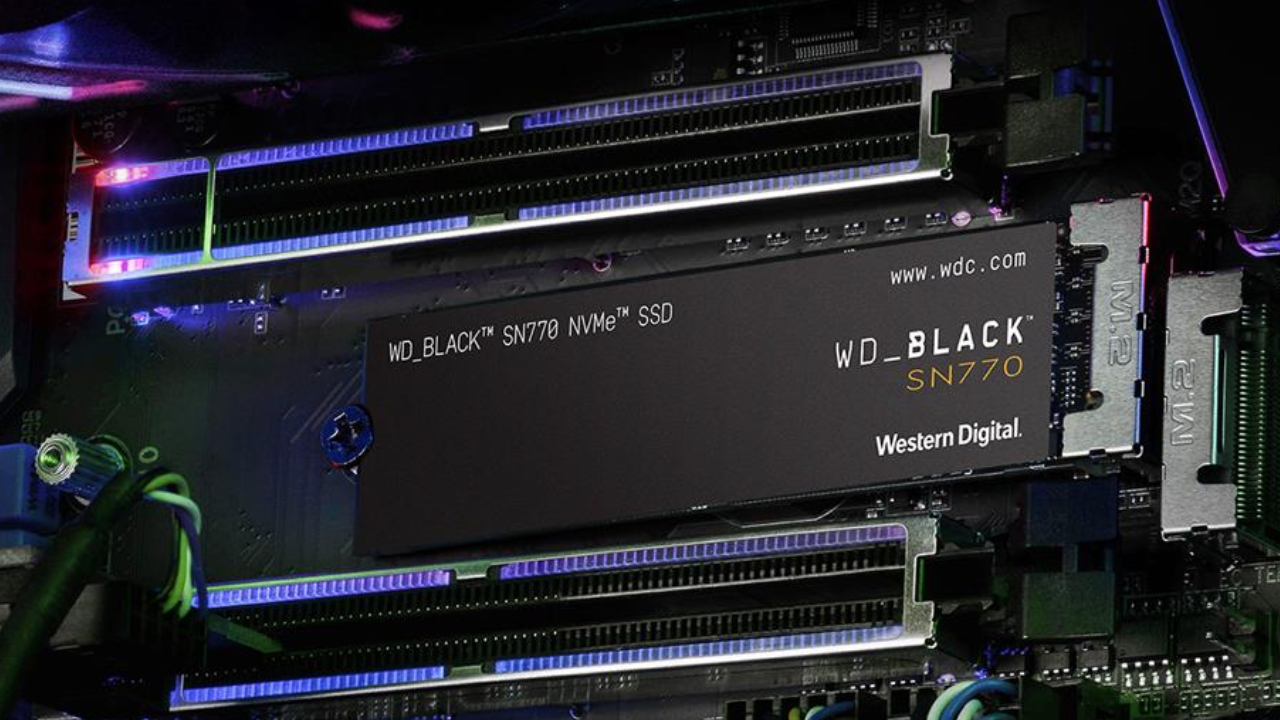 At last check there’s about a bazillion SSDs on the market at this point, from dozens if not hundreds of vendors. It’s hard to know which drives are worth your hard earned money, and which have cut corners in the pricing wars. Well, we’ve reviewed quite a few drives recently, and we’ve got a pretty good grip on which features are important, and which are back-of-the-box buzzwords. Let’s unbox the WD_Black SN770 from Western Digital and see where it falls in the list.

You might recall that we recently took a look at the WD_Black SN750 SE – a special edition NVMe that came packed with Battlefield 2042. While the game came in a little underbaked, there’s no doubt that the Western Digital team had squeezed the hardware pipeline as hard as possible. What hit the market was a drive that came in at $89 for a 1TB drive – easily the most aggressively priced NVMe SSD backed by a 5 year warranty. How’d they do it? It shipped without a DRAM cache. Before we get into the specifics of the SN770, let’s talk about what DRAM cache is and what it does. 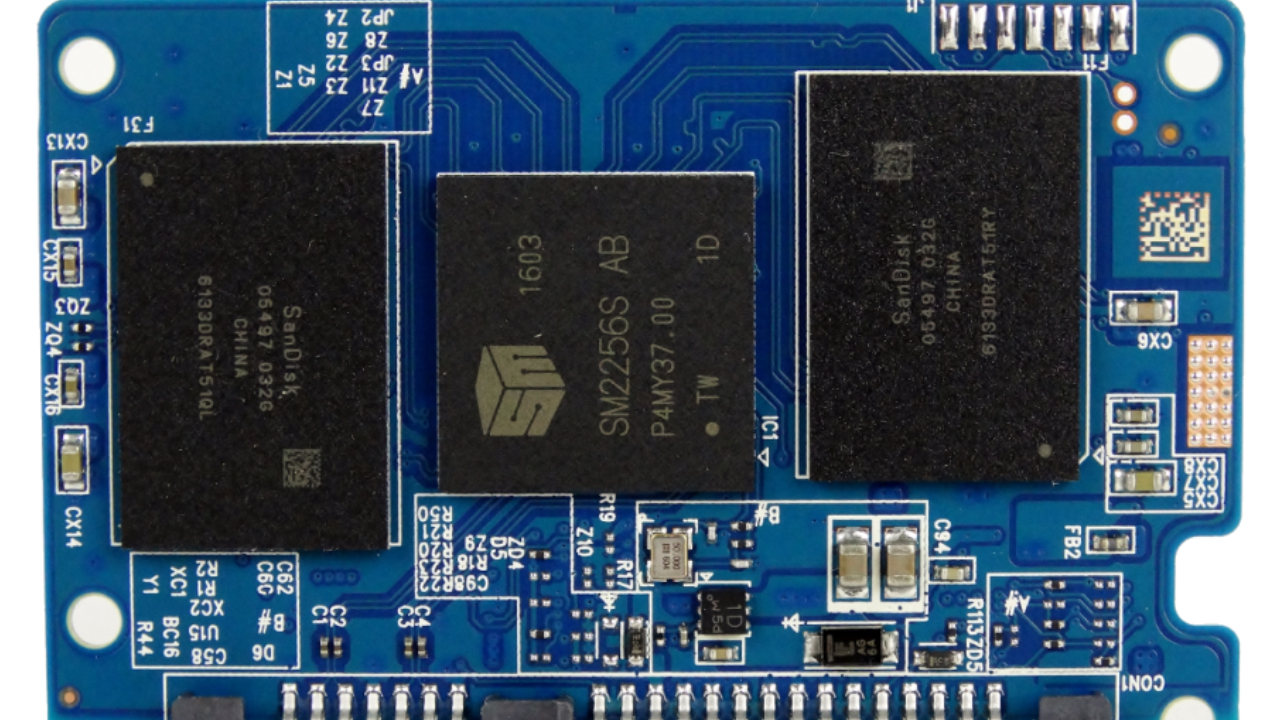 These are DRAM cache chips.

DRAM cache is used to keep a sort of virtual map of your drive, tracking where data lives, and where it’s being moved for future access. It also helps ensure that no particular sector of the memory modules are being written to so frequently that they’d wear out. So, that means DRAM cache is a crucial part, right? Well, not exactly. The virtual map I mentioned earlier does exist, it just lives on the NAND flash module instead of a dedicated DRAM cache. There’s also another option — use the DRAM on your memory. Some newer drives are now using memory otherwise devoted to the CPU’s DRAM to keep that virtual map instead of on the drive itself. Efficient, albeit a bit sneaky, thought neither will be as fast as having local NAND storage. In real-world applications, we’ve found that the only time running low on DRAM cache has mattered was in very large file copies, not in random access use.

It’s actually inaccurate to say this device lacks a DRAM cache. The SN770 is powered by a SanDisk 4-channel 20-82-10081 chip, Western Digital’s own in-house DRAMless SSD controller. As such, the team was able to manage a 20% improvement in power consumption over the SN750 SE – an already impressive SSD in its own right.

Three versions of the drive are available, a 500GB, 1TB, and 2TB model, with some differences that might not be immediately apparent. All three models carry a 5 year warranty, which is fantastic, but the 500GB model comes in at 5000 MB/s read, and 4000MB/s write speeds. The 1TB hits at 5150 and 4900, respectively, and the 2TB model just slightly less than that at 5150 MB/s read and 4840 MB/s write. All relatively close, right? Looking a layer deeper, their IOPs are very different. So what’s an IOP?

IOPS stands for Input/output operations per second, but more specifically it’s talking about the number of reads and writes per second to a non-contiguous location on the drive. Given that files are not typically written to a single sector of the drive, this is important. When you uninstall a game, install another one, uninstall that one, and install yet another one, your files can be scattered all over the place, making IOPS critical to loading speeds. As we go back to DRAM once again, that “roadmap” of file locations becomes important. In the days of mechanical hard drives, you would defragment your drive to move those files closer together, removing the spaces in between. In flash drives, the seek time to hit different parts of the physical drive is all but eliminated, meaning the controller speed is where you should pay attention. 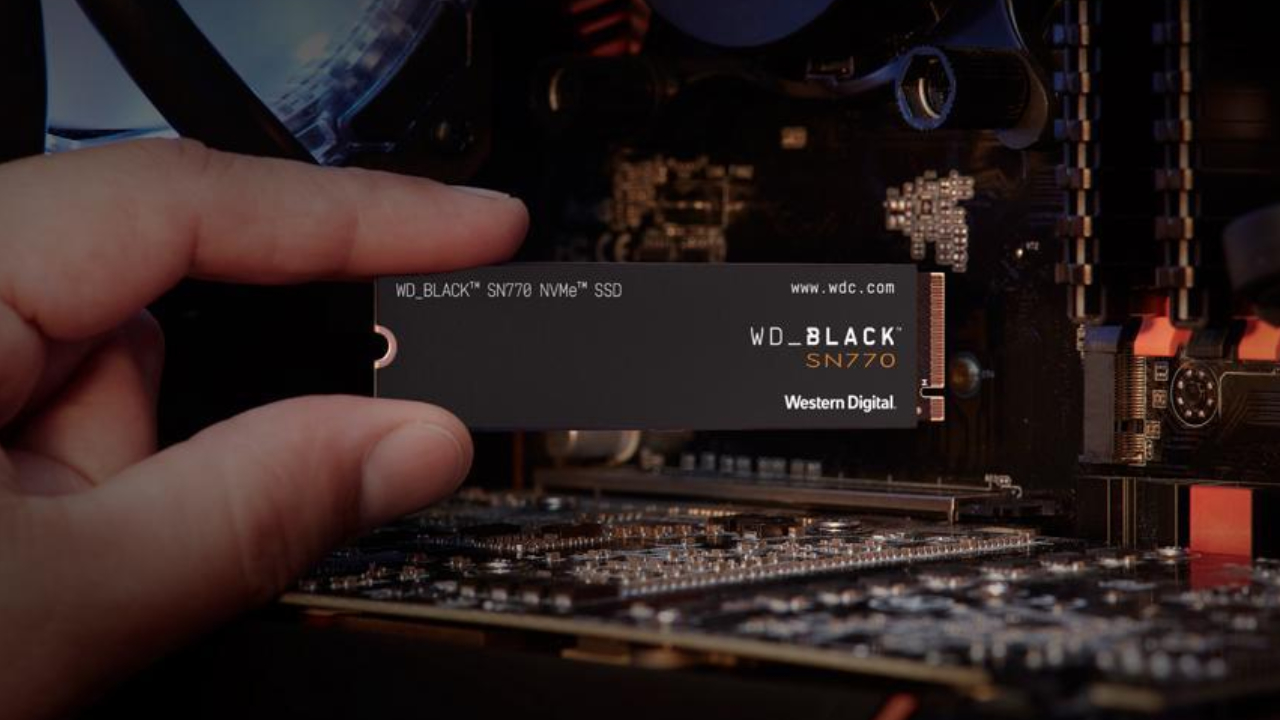 There is one key differentiator that you should be aware of for extended use – TBW. Rather than focusing on MTBF, or Mean TIme Between Failures, the industry is moving to TBW, or Terabytes Written. It’s not a hard and fast measurement of a drive’s longevity, but generally a safe operating longevity. The 500GB is rated for 300, the 1TB is rated for 600, and the 2TB is rated for 1200 TBW.

Before we dig into the synthetic benchmarks, I’ll say one last thing about performance indicators…they aren’t a reliable measurement. I say this as all of us are in mixed-use environments. I personally use my system for compiling in Visual Basic, rendering videos, playing games, surfing the web, running Outlook, and much more. All of those are very different use cases, meaning my hardware is not purpose-built for just one thing. In something like a data center where you are performing AI-driven machine learning, you’d pick up an all-flash array and worry about IOPS much more as you are performing incredibly complex mathematical computations and constantly reading and writing. If you are rendering video and scrubbing through footage, you are far more dependent on high-speed reads as you rewind and fast forward through your files.

Loading it up on my PC, the installation was equally as simple. Dropping it into an available m.2 slot, Windows immediately picked up on it, formatted it, and set it up for use. No news is good news when it comes to this, so I’ve thankfully got nothing to report – it installs precisely as advertised.

Alright – enough theory, let’s get into something we can measure. Firing up Crystal Diskmark, it gives us a great snapshot of how the device performs at the top end. Observe: 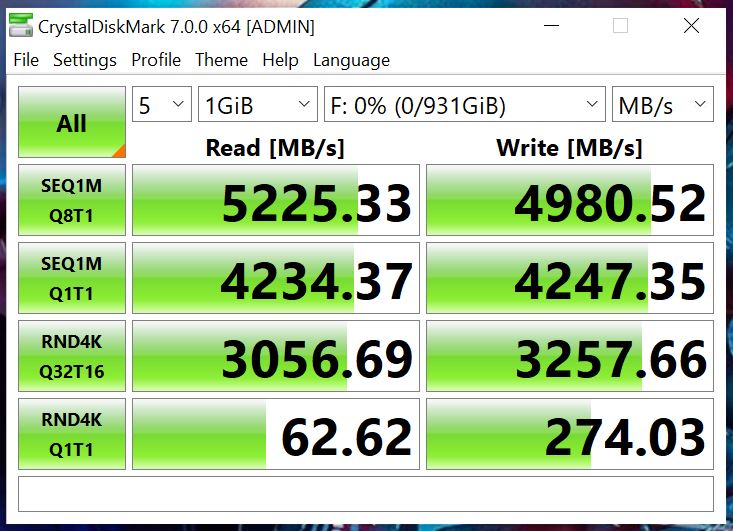 Here we see the drive easily hits the numbers advertised on the box for sequential reads and writes. Better still, we don’t see a huge dropoff when we switch to randoms. While I like this test, I like to back it up with a longer test from ATTO. 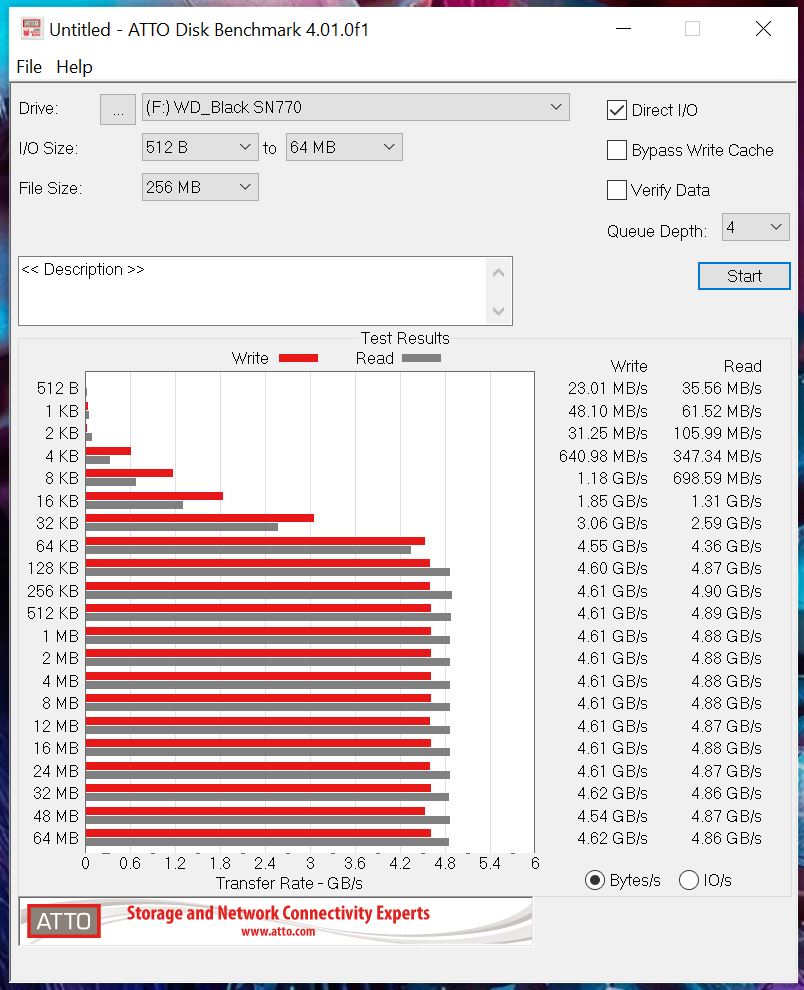 Unlike the SN750 SE we reviewed last year, we see highly consistent reads and writes, even as the buffer fills completely. So much so that I felt like there could have been an error, so I ran it three more times just to be sure, and all of the results looked exactly like this. Loading the drive up to 90%, the values didn’t change even slightly. This drive is remarkably consistent – something you will greatly appreciate in a storage medium, though it does hit closer to the 5GB mark – 500MB shy of maximum.

Naturally, I wanted to test this in some real-world conditions, so I cracked open my PS5 and threw it in there. The aforementioned 750 SE complained about not being compatible, but did work, but the SN770 gladly formatted and set up instantly. While I’d still recommend you spring for the WD_Black SN850, the SN770 will work if you add an aftermarket heatsink.

Like the SN750, the SN770 ships with a 5 year warranty – the longest I’ve seen in the industry. Coupled with the Western Digital Black Dashboard software, you’ll have plenty of peace of mind that the drive is in good working order, likely beyond that timeframe. If you’ve not had the opportunity to use the free WD_Black Dashboard, it’s an impressive piece of software that very much reminds me of Microsoft’s PowerBI platform. Everything you could possibly want to know about your drive, and likely quite a bit you don’t, is all contained in here. Normally I don’t advocate for additional bloat on my PC, but the Dashboard really is top notch. 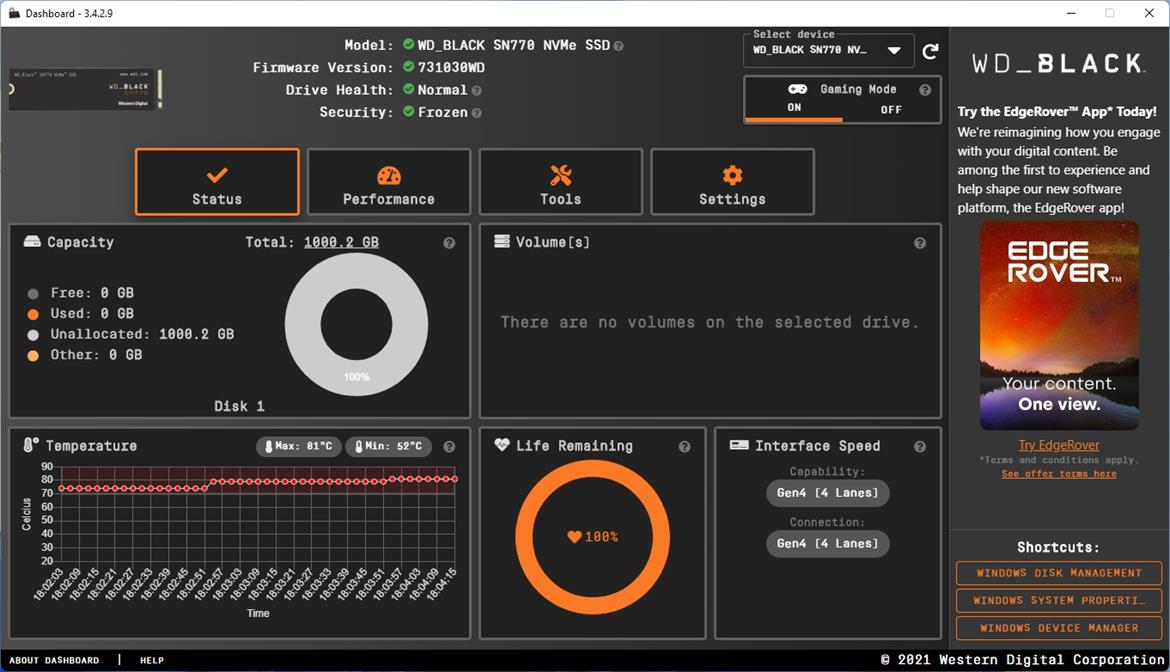 There is one last included goodie – a free copy of SanDisk’s RescuePro Deluxe data recovery software. Handy for prying files back from the abyss, this can be handy for when you accidentally nuke a file, but it’s downright crucial if you have a drive starting to fail. I’ve had occasion to use it twice in my life, and it saved my bacon both times. It’s a nice inclusion that you hope you never have to use. Do yourself a favor and take a picture of the tiny included card with a code on it – it’s easy to lose.

Western Digital does it again – the SN770 represents a big leap forward for NVMe storage tech. Able to reliably and consistently hit the advertised read and write speeds across the entire file size spectrum, the only thing missing here is a heatsink. With 1TB hitting the sweet spot of price to performance, the SN770 is a must have for any bleeding-edge build.

Ron Burke is the Editor in Chief for Gaming Trend. Currently living in Fort Worth, Texas, Ron is an old-school gamer who enjoys CRPGs, action/adventure, platformers, music games, and has recently gotten into tabletop gaming. Ron is also a fourth degree black belt, with a Master's rank in Matsumura Seito Shōrin-ryū, Moo Duk Kwan Tang Soo Do, Universal Tang Soo Do Alliance, and International Tang Soo Do Federation. He also holds ranks in several other styles in his search to be a well-rounded fighter. Ron has been married to Gaming Trend Editor, Laura Burke, for 21 years. They have three dogs - Pazuzu (Irish Terrier), Atë, and Calliope (both Australian Kelpie/Pit Bull mixes).
Related Articles: Hardware, SN770 NVMe SSD
Share
Tweet
Share
Submit