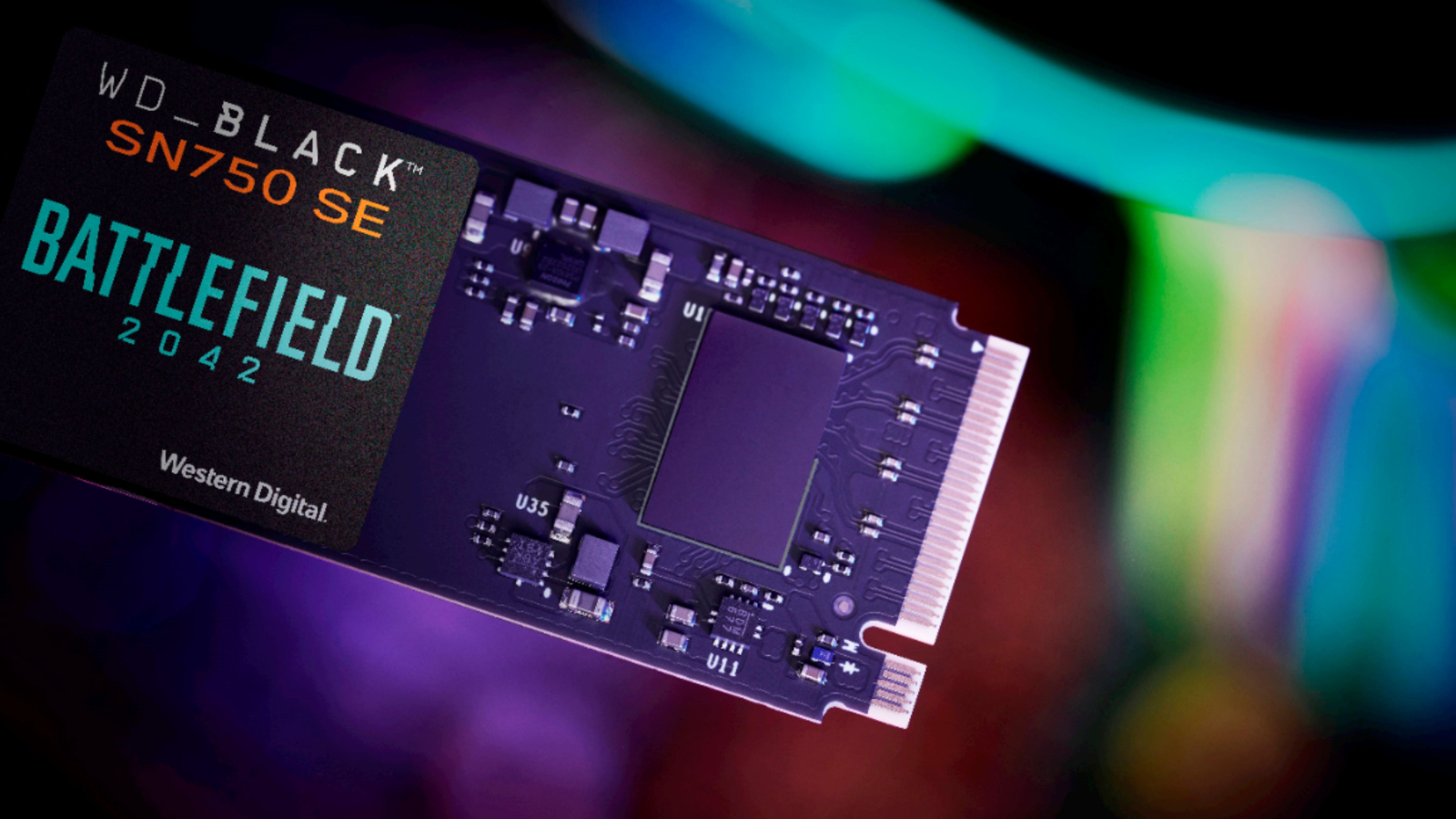 While fools like me scramble to get their hands on the 12th Gen Intel processors, there is a massive base of players taking advantage of the 10th and 11th generation platforms on PC who need high-performance drives to move away from spinning platter hard drives. Western Digital is offering a Special Edition of their SN750 as a collaboration with DICE and EA on their upcoming title Battlefield 2042, including a standard edition digital copy of the game as part of the package. As this is a fork of the already-established SN750, I was eager to see what differences, if any, there are with this SN750 SE. Let’s unpack it and get under the hood.

There are two variants of the special edition of the SN750 SE — a 500GB and a 1TB model, with costs being $89.99 and $139.99, respectively. If you are planning on buying Battlefield 2042, this drive comes with a standard edition of the game, making the drive just $30 at the smaller capacity, or $70 at the high end — hardly a premium. So what is the big differentiator between this SN750 SE and SN750? Well, DRAM cache, or lack thereof. I can already hear the warning sirens as you reach for your mouse to eject, prepared to write off this device…but hold on, there’s more to the story. Read on.

DRAM cache is used to keep a sort of virtual map of your drive, tracking where data lives, and where it’s being moved for future access. It also helps ensure that no particular sector of the memory modules are being written to so frequently that they’d wear out. So, that means DRAM cache is a crucial part, right? Well, not exactly. The virtual map I mentioned earlier does exist, it just lives on the NAND flash module instead of a dedicated DRAM cache. There’s also another option — use the DRAM on your memory. Some newer drives are now using memory otherwise devoted to the CPU’s DRAM to keep that virtual map instead of on the drive itself. Efficient, albeit a bit sneaky, thought neither will be as fast as having local NAND storage. All of that said, let’s figure out how much of a difference this makes.

Game files are typically made up of many, many tiny files being read at high speed. On the other hand, large sequential reads and writes like video editing or moving a single massive file isn’t all that common in videogames. Even your RTX-enabled 4K visual masterpieces with obscenely large textures are highly unlikely to tap into DRAM cache if you had it. Conventional wisdom is that it’s very unlikely that you’ll ever notice a difference. But I’m a numbers guy — let’s run some benchmarks against other similar devices with DRAM and see how it all shakes out. Let’s start with the WD_Black SN750 SE to set the bar. 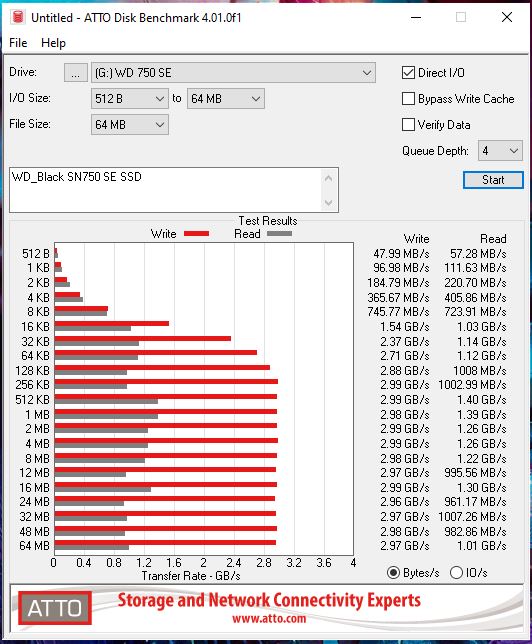 I don’t have another WD_Black drive to compare it to, so we’ll turn to competitor Seagate to see how their FireCuda 720 performs. 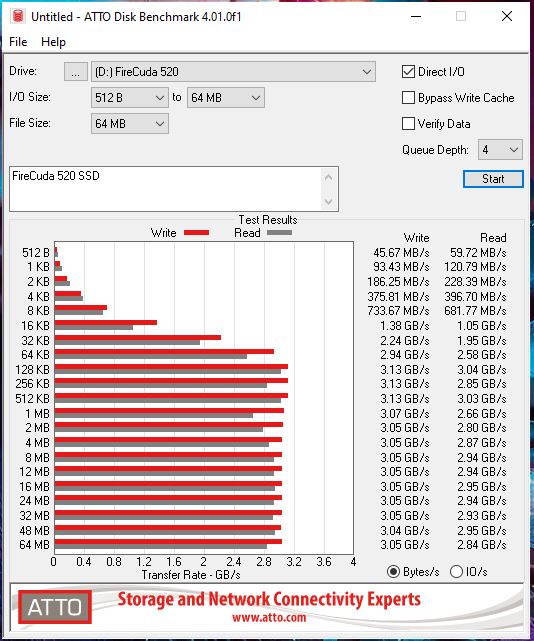 It’s immediately clear that the write speeds are dramatically better on the FireCuda 520, but this is an entirely synthetic test. Could that be the cache buffer simply filling with large files and then performing well after that point? We’d need secondary confirmation before we draw any conclusions. To that end I turned to CrystalDiskmark as their test is a pure test of speed maximums: 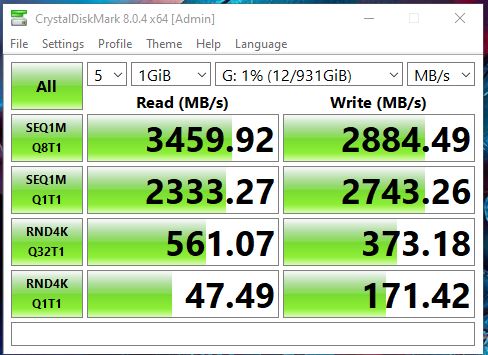 Clearly we see far more consistency under this test, but thankfully 3DMark has a brand new test to see how a drive might perform in the real world. This new SSD Benchmarking tool does three loops of real-world applications to produce an aggregate score at the end. Specifically it tests loading Battlefield V from launch to the main menu, loading CODBLOPS4 from launch to the main menu, loading Overwatch from launch to the main menu, copying the Steam folder for Counter-Strike Global Offensive from an external SSD to the system drive, recording a 1080p gameplay video at 60fpss with OBS while playing Overwatch, installing The Outer Worlds from the Epic Games launcher, and finally saving game progress in The Outer Worlds. When all three tests are complete, it provides you with a summary. 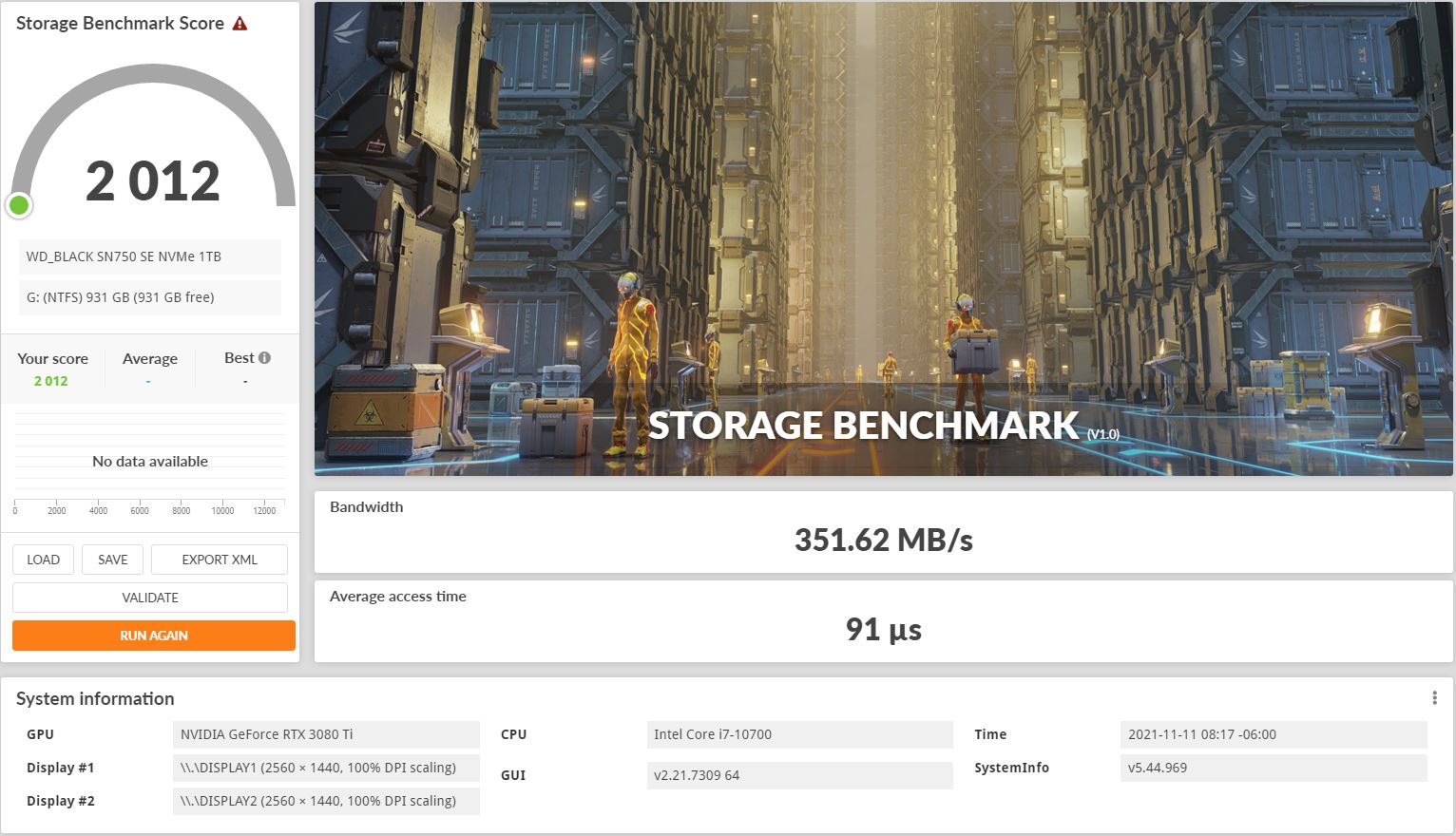 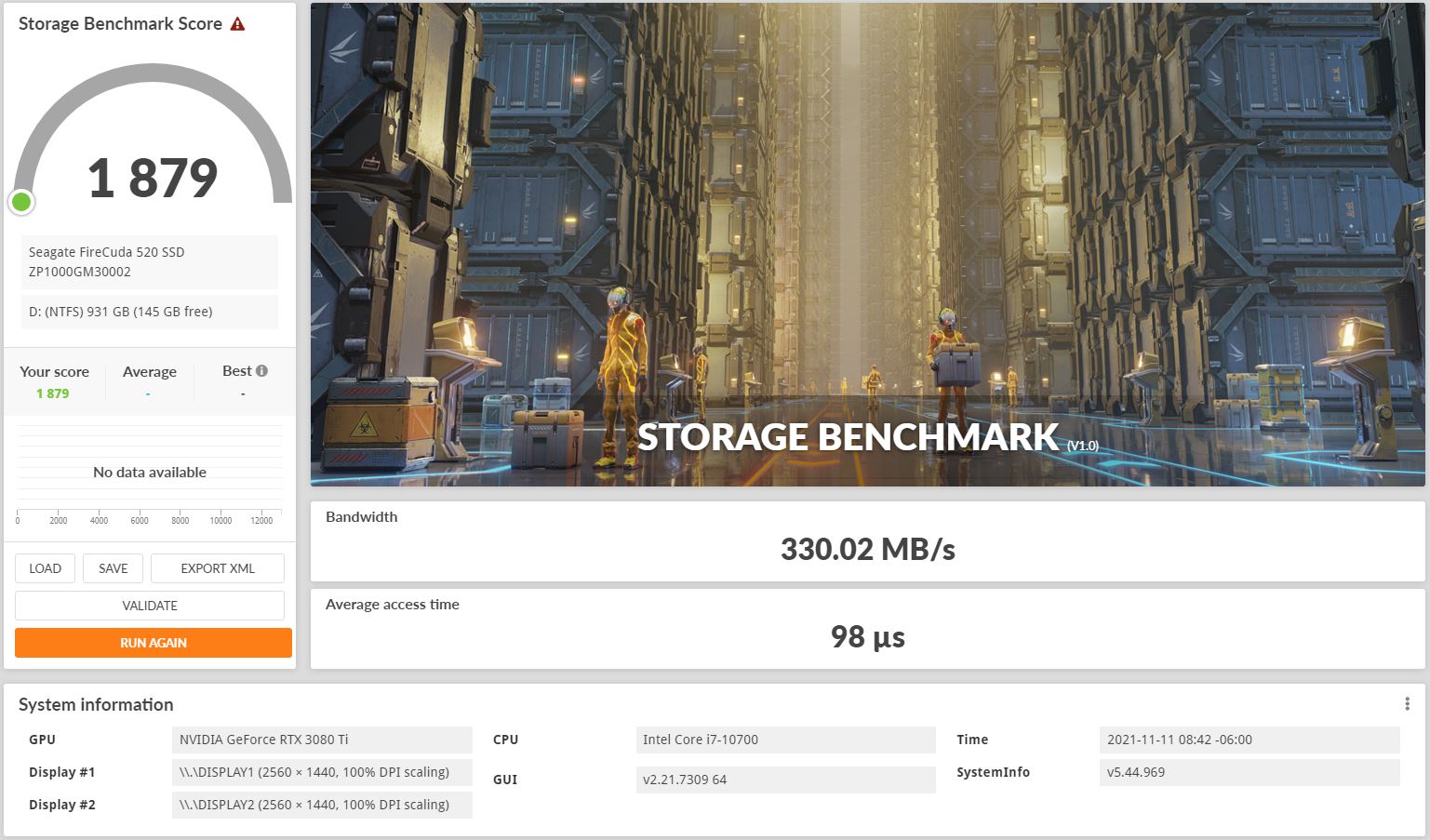 Ok, are you confused? I was too. If you look at the bandwidth exclusively, you’d be convinced that this drive is operating at a shockingly low level. In fact, the bandwidth score is a geometric mean of the bandwidth used during the 3DMark Storage Benchmark, not a measure of the drive’s peak sequential read/write performance. In point of fact, this is likely the real-world throughput you’d find in a game as you are constantly loading large and small files concurrently or sequentially. Just for comparison sake, I also benched an equivalent drive — a Seagate 520 M.2 SSD. As you can see, the SN750 SE manages to pull ahead just slightly, both in aggregated bandwidth score, and in average access time.

Based on Sony’s requirements for the PlayStation 5, the SN750 SE can’t quite hit the recommended mark for their flagship console, though it is a Gen4 NVMe SSD. That said, I slotted the drive and…well, it works just fine, or at least it does on the current crop of games. Sure, the OS complained that it had insufficient read speed, but it also didn’t stop me. More demanding games on the horizon (Forbidden West) may grind it to dust, but you might squeak by for now. Still, that said, you will feel the pinch when you transfer to and from an archive drive like the D30 — the DRAMless nature of the 750SE is going to result in longer transfer speeds. That’s because the 750SE utilizes the Host Memory Buffer on a PC’s RAM for caching — something obviously unavailable on the PlayStation 5. If you can get your hands on one, I might suggest the SN850 — it’s custom built for that purpose and comes with a heatsink — something else you’d need to pick up if you want to try your hand at the SN750 SE in the PS5.

There are a number of improvements in the SN750 SE, even over its predecessor. First and foremost it draws 30% less power than the previous iteration — useful as our processors seem to draw more and more these days. Less power means less heat, which is better for the overall health and longevity of the drive. Normally, the other advantage would be a lower price due to the lack of DRAM. When the SN750 launched it did so at $249.99, but recent price breaks have seen it hit as low as $99 at the time of writing. The 750SE, which again I may remind you comes with a just-released AAA game, released at $139, but has also seen prices in the $109 range, meaning you really have to price in the cost of the included game to realize that $59.99 benefit. Perfect if you already intended to buy the game, but less so if you weren’t. Compared to that FireCuda 520 though, it’s a steal — that drive’s lowest sale price is $170.

The final thing to consider when purchasing a SSD is warranty, and anyone reading my hardware reviews knows that I’m a real stickler for them. It’s great when something works, but you want to know that you’ve got a company standing behind you when things go sideways. Western Digital backs this drive with a five year warranty. That, combined with the free Acronis True Image WD Edition software for backups, should give you the peace of mind that whatever you put on this drive stays on this drive until you remove it.

The free backup software and Battlefield 2042, one of the hottest games of the 2021 holiday season, and the impressive read and write speeds makes the WD_Black SN750 SE the perfect value of performance and cost for gaming. If you need a solid DRAMless M.2 SSD, it’s hard to go wrong with this one.

Ron Burke is the Editor in Chief for Gaming Trend. Currently living in Fort Worth, Texas, Ron is an old-school gamer who enjoys CRPGs, action/adventure, platformers, music games, and has recently gotten into tabletop gaming. Ron is also a fourth degree black belt, with a Master's rank in Matsumura Seito Shōrin-ryū, Moo Duk Kwan Tang Soo Do, Universal Tang Soo Do Alliance, and International Tang Soo Do Federation. He also holds ranks in several other styles in his search to be a well-rounded fighter. Ron has been married to Gaming Trend Editor, Laura Burke, for 21 years. They have three dogs - Pazuzu (Irish Terrier), Atë, and Calliope (both Australian Kelpie/Pit Bull mixes).
Related Articles: Hardware, WD_Black SN750 SE NVMe SSD
Share
Tweet
Share
Submit