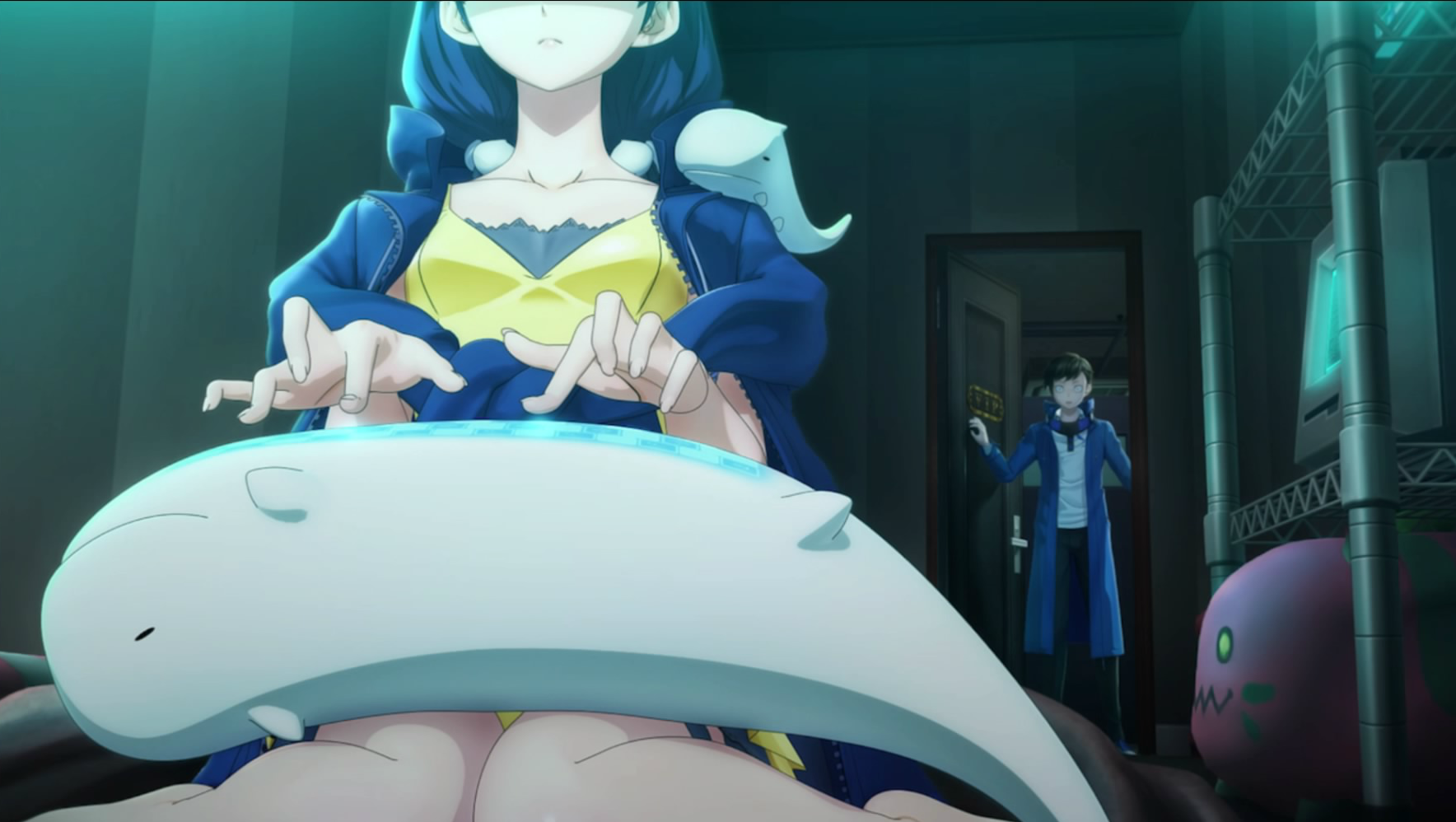 Digimon represents the simultaneous best and worst of monster catching and raising games in my view. It is incredibly complex and takes the concept of monster evolution to new and incredibly dynamic places. Along the way, however, you have an infinite sea of cute-faced goober monsters constantly cooing and sad-eyeing their way into the vomitous pits of saccharine sweetness. It is hard to believe the helpless nature of creatures that can conjure lightning.

So Digimon Story: Cyber Sleuth – Hacker’s Memory is not only a long name, but it’s a complex game as well. Where simplicity is involved there are some slight issues, particularly with navigation. Then, on top of all that is a big dollop of that over-sweet Digimon flavor. It shakes out to a pretty nice cup of coffee with strawberry jam in it.

Hacker’s Memory starts with an attack on the main character’s digital being. In a futuristic Japan, the EDEN system allows internet users to physically enter the digital world, and in this world the protagonist has had his account stolen and has been set up for crimes he had nothing to do with. His naive search leads him indirectly to a group of benevolent hackers called “Hudie”, a group he joins in hope of solving his identity crisis.

His main accompaniment is a young digital savant named Erika, who types, loves, and rages with a stuffed animal/digital keyboard interface named “Memetan.” She’s adorably helpless and frighteningly capable, and her presence as a highly skilled hacker gives the main character, a mostly green figure, some credible ability to solve his case.

This game does have some detective style aspects to it, but it certainly doesn’t feel much more like just story driving elements for a JRPG. I was disappointed in that lacking element due to the word sleuth being in the name of the game. It has the tone, however, of an investigation and manhunt with the overlay of Digimon’s sugary sweet aesthetic. There are some questioning portions of the game as well where you use a keyword to find information by talking to different NPCs.

The game is split into two worlds, one which is our own physical realm. You walk the streets of Japan, and I love the way they look in this game. While not really high resolution all the time, the design makes the world come alive. It feels authentic and cartoony all at once and reminds me of the ambient style of classic RPGs like Parasite Eve. Unfortunately, a fairly blocky and invisible wall friendly navigation of said world also reminds me of that era, and that is not at all a pleasant bit of nostalgia.

The other world is the digital realm known as EDEN, and this is where you do the battling, exploration, and grinding. The look is of that generic digital interference, with blocks of energy as platforms and lots of blue rippling pixelizations flopping about everywhere. There are some interesting portions of this world but for the most part it is a boring blue dreadful road to run.

The battles held here are lots of fun, however. They are pretty standard battles, turn based and based on attacks, special moves, and the use of items. You can have up to 3 Digimon in your party at one time.

Where the complexity enters is in raising the Digimon. You can “digi-volve” these creatures, which raises level caps and extends their stats. However, you can also “digi-devolve” and the same will occur, but with a smaller and different style creature. I like that I can have a sort of mulligan if a Digimon I like upgrades to something useless. I also very much enjoy that the strongest Digimon is not necessarily the biggest or the most advanced.

Beyond just battling, digimon can be raised in a “Digifarm” which can also be modified, and allows for multiple farms as well. There are costumes and accessories for the digital creatures, as well as for yourself. If the CPU enemies aren’t proving much of a challenge, you can take your digimon into the network arena and battle against other players to see who is the superior trainer. It is basic, but fun to try and a nice way to gauge the strength of your team beyond the parameters of the main game.

The game has an interface for menus and the like that is easy to navigate, and everything is clear and easy to read. I don’t like that the Options button is an auto exit button, as it gives me anxiety I’m going to hit it on accident. I also have a strange problem with the music. While it’s fairly generic light-hearted fare, there is a snare drum sound that mimics the bark of a dog almost entirely. It is distractingly silly sounding and prominent in several areas. The game provides tons and tons of collectables and long lists to complete, giving it a lengthy playability.

Digimon Story: Cyber Sleuth - Hacker’s Memory is a fun mix of JRPG and simple investigation tactics taking place in a digital sugarland with tons of adorable creatures. When it is at its best, the scenery is beautiful and the game is complex fun, but it has lulls of dull look and sound as well. This game is a lot of fun and a unique experience for Digimon and RPG faithful.

Patrick Rost has been with Gaming Trend since 2013. At first focused on sports coverage, Patrick has gone on to cover a wide range of games and other products for the website. Outside of Gaming Trend, Patrick writes and records music, grinds perpetually in Elder Scrolls Online (PS4), and lives day to day with his two dogs, Bob and Stella.
Related Articles: Digimon Story: Cyber Sleuth - Hacker's Memory
Share
Tweet
Share
Submit