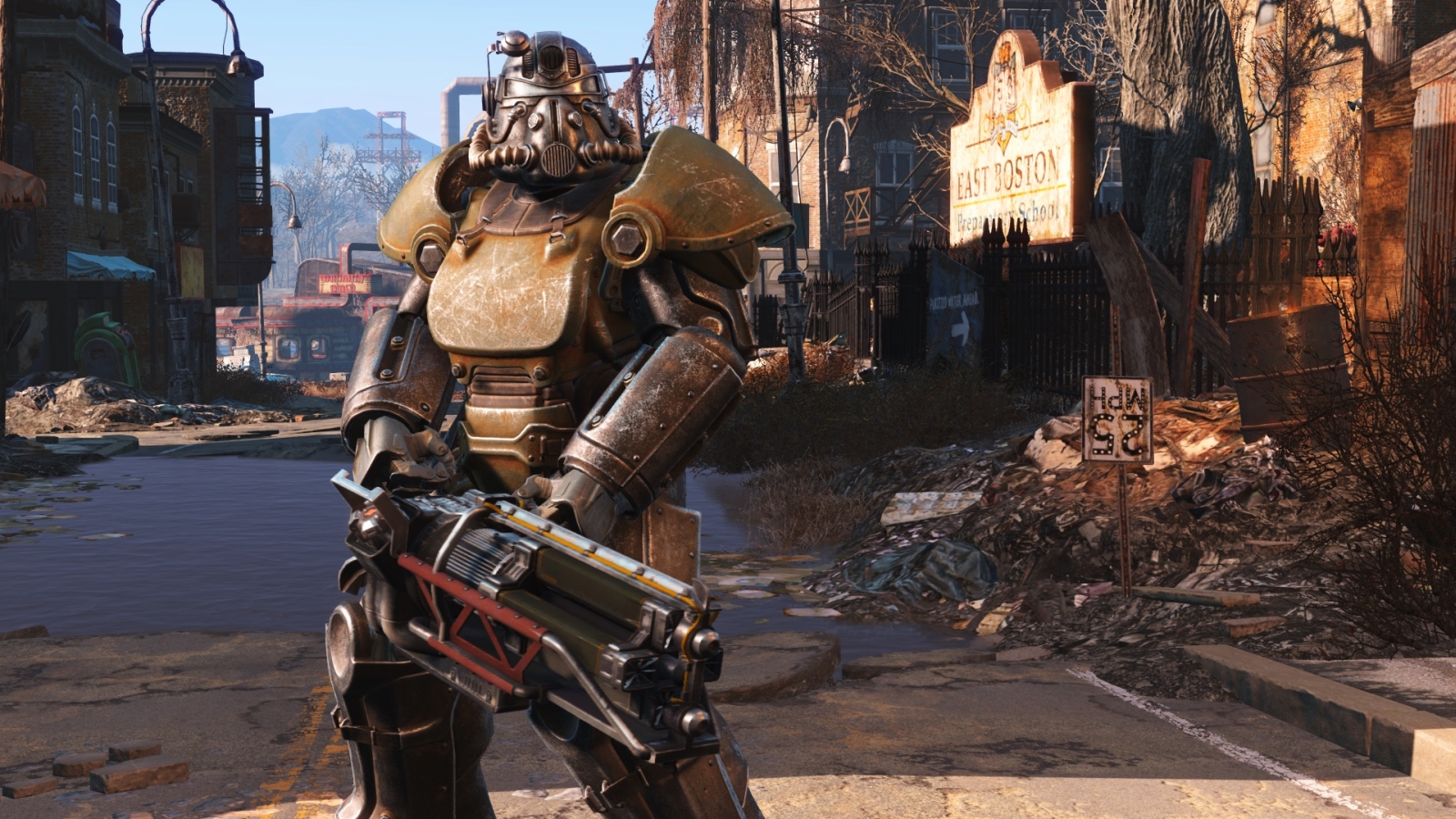 I absolutely loved Fallout 4 when it came out. Sure, I wanted to shoot Preston Garvey in the face by the end of over 100 hours in the radroach-filled world, but when Bethesda announced that we’d be returning to the radiation romp in VR, I couldn’t be more excited.

First things first, Fallout 4 VR has had a bit of a rough launch so far. Shadows flickering, texture pop-in, blurriness, resolution issues, scaling problems, and more marred the first few days since launch. The best part about the PC community, however, is that within a few hours all of these issues were completely resolved. Shortly thereafter, the team at Bethesda issued a beta patch that rolled all of these into something more official. People that were getting 10fps were suddenly able to smoothly punch radroaches, enjoy maximum draw distances, and stand eye-to-eye with the residents of the wasteland. That said, there’s still a lot of work to go. I’m still encountering some sort of grey box that looks like my power armor has a monitor privacy screen over its face, scoped weapons are a post-launch addition, and I’m still seeing a bit of reprojection at default settings. The good news is that it’s all correctable.

The virtual Pipboy is an awesome experience.

There are a few things that VR games do very well, the biggest of which being world interaction. Fallout 4 is a world full of trash to pick up, salvage, and cart around like a homeless person sans shopping cart. The hitch is that, on a pancake-screen experience, you typically just mouse and click, whereas in the virtual world you physically manipulate by reaching out and grabbing them. As Fallout 4 VR was not built from the ground up for VR, you’ll still end up opening desk drawers with a click in the center of the Vive wand. All of that said…

The game features two locomotion methods, though I was surprised to find that I didn’t need the choice. You can use a simple teleportation method (though it feels a bit short, and it uses too many Action Points), or you can use natural locomotion. It’s all adjustable, but the sight aperture narrows as you move. In practice, despite my issues with natural motion in VR, I was able to play for hours without feeling nausea.

Fallout 4 VR, unlike the recently released VR version of Skyrim, does not contain all of the DLC. That said, modders have already confirmed workarounds, jamming in texture replacements and downloadable content. There is even a workaround for the scoped weapons. It’s an odd omission, as Skyrim VR (our review) contains all of the DLC for its release on PSVR.

Guess what — another settlement needs your help!

If there’s a highlight to Fallout 4 VR so far, it has to be the combat. Shooting radroaches and raiders is fantastic, but leaping off a building in a suit of power armor and gunning down a massive deathclaw with a minigun put a very wide grin on my face. Melee is more satisfying than anything in the pancake version, and I can’t wait to get my hands on some Power Armor Fist Servos. I can’t say I used them much in my pancake-playthrough, but in VR it’s on my bucket list.

Artificial movement in VR is what often causes issues with nausea. Obviously, this makes the semi-frequent cinematic moments of Fallout 4 somewhat problematic. Cutting away from the player to watch as you crank a homerun against a molerat’s head, sending its teeth flying, would cause the camera center to fly away from the player, and then snap back to a first person view. As such, the team has modified the way V.A.T.S. (Vault-Tec Assisted Targeting System) works for this virtual reality outing. In the pancake version, V.A.T.S. lets the players use action points to target specific areas based on a combination of weapon capabilities and player stats. In Fallout 4 VR, V.A.T.S. functions more like the bullet time pioneered in games like Max Payne, granting slow motion to let the player target how they see fit. This keeps the game moving, albeit slower, instead of snapping it to a halt. It directly translates player aim into action, making combat feeling more meaningful.

Holding power armor in your hands are awesome. Wearing it is out of this world!

I was disappointed the first time I shouldered a rifle in Fallout 4 VR. Unfortunately, instead of seeing the glass reflection of a 4X zoom scope, I was instead treated to a boot-black matte opaque obstruction to my vision. Bethesda has promised that scopes will be added back to the game, but modders have already had success simply using Nexus mods to push it back into the title. If modding is not your cup of tea, however, there are more than enough benches in the wasteland to drop a nice set of iron sights on your chosen weapon in the meantime.

Fallout 4 revolves around the Pip-Boy, and Bethesda has decided to build the virtual version in such a way as to ensure full immersion. Lifting up your left arm and turning it as if looking at a wristwatch, your Pip-Boy swings into view and then enlarges to allow for ease of viewing. Your stats, inventory, data, map, and radio, and various submenus are all contained here, as is your paperdoll for equipment. Navigation is handled by holding the wand horizontally, pressing the appropriate direction on the trackpad. Is it clunky? Yea, more than a little bit. Does it work? With a little practice. You can turn it off and make it a floating menu, but that breaks the immersion the team has built.

There is one other aspect that breaks immersion — the skybox. Looking up during the evening, the stars appear to be about 100 feet above your head. It feels like your adventure takes place in some sort of Planetarium. I hate to keep saying it, but I have no doubt that modders will fix this before Bethesda eventually patches it.

Everyone’s favorite settlement coordinator Preston Garvey expects that you’ll invoke your inner Bob Villa and rebuild the innumerable and various settlements in the wasteland. Vanilla Fallout 4 does a reasonable job at this, but the virtual version presents your options as floating representations of the furniture, structures, and accessories available. Placing them is a little awkward, but in practice not a whole lot more awkward and doing it with a console controller — mouse and keyboard is still king. As for the actual objects, I’m again certain that the mod community will expand the options to the stratosphere, just like they did for the flatscreen version.

There’s a lot of things in Fallout 4 VR that peel back the veneer, showcasing that the game was not built for virtual reality, natively. Then you stumble on something like being able to physically lean around a corner to zap a supermutant in the face, or stooping down to pick up a box of caps you never knew was there. It’s an easy world to get lost in, and in virtual reality, even the most mundane of fetch quests feel amazing.

While unsurprisingly riddled with bugs at launch, and with other aspects just missing (DLC and scopes, as an example), the community steps in to make this incredible game one of the best titles on the VR platform. Delivering nearly 80 hours of gameplay, even without addons, it’s easily the largest and most compelling reason to own a VR HMD.

Ron Burke is the Editor in Chief for Gaming Trend. Currently living in Fort Worth, Texas, Ron is an old-school gamer who enjoys CRPGs, action/adventure, platformers, music games, and has recently gotten into tabletop gaming. Ron is also a fourth degree black belt, with a Master's rank in Matsumura Seito Shōrin-ryū, Moo Duk Kwan Tang Soo Do, Universal Tang Soo Do Alliance, and International Tang Soo Do Federation. He also holds ranks in several other styles in his search to be a well-rounded fighter. Ron has been married to Gaming Trend Editor, Laura Burke, for 21 years. They have three dogs - Pazuzu (Irish Terrier), Atë, and Calliope (both Australian Kelpie/Pit Bull mixes).
Related Articles: Fallout 4 VR, VR
Share
Tweet
Share
Submit