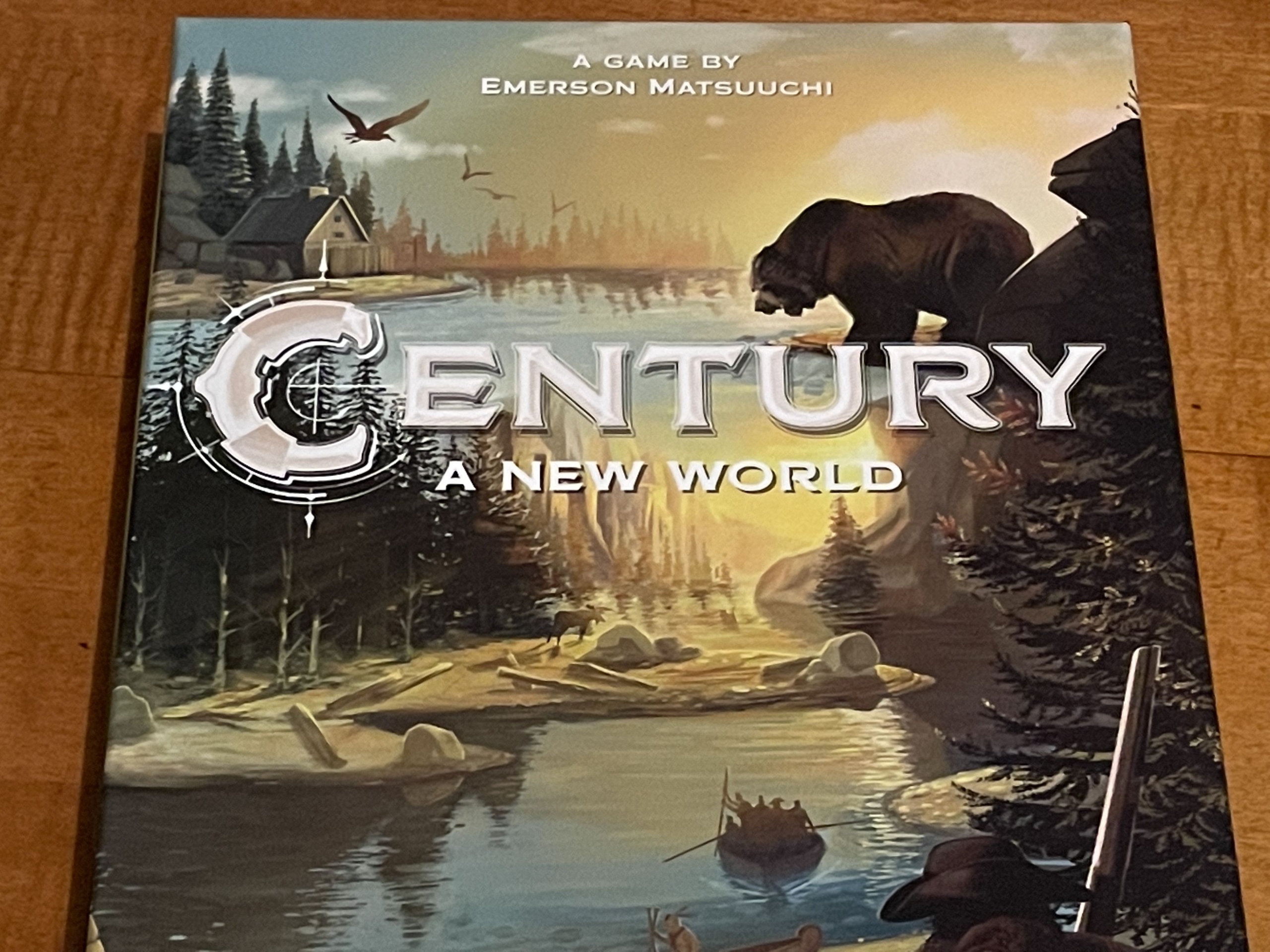 Emerson Matsuuchi created the Century series of games. At first glance, you might think that they play similarly. Colored cubes get upgraded throughout the game, which in turn get exchanged for point cards. However, the method for completing that objective changes in each game, making for very different experiences. Century – A New World is the last in the series.

The main board consists of four location squares that create twenty-three locations. Each of these spaces indicates a number of settlers that need to be used to activate them. Most of these locations involve cube manipulation. Some produce cubes, while others can upgrade them directly or make specific cube trades. Several of these locations have an exploration tile on them making the space unavailable at the beginning of the game. Some of these spaces also have icons next to them that relate to benefits on certain scoring cards.

The top four spots are fort locations with a scoring card above them. These fort locations also hold bonus tiles that can be picked up and placed on the player board for scoring at the end of the game.

The scoring cards show the number of points it’s worth as well as the cubes needed to trade to get the scoring card. They also show a benefit, like removing an exploration tile from a location, gaining more settlers, requiring one less settler to use a space with a specific icon, or gaining an extra cube when using a space that has the specific icon on it. A New World icon is also shown in the upper right corner of the scoring cards, and these are used at the end of the game for bonus points. When a scoring card is claimed, the cards to the right of the claimed card get moved to the left, and a new scoring card gets placed above the rightmost port location. 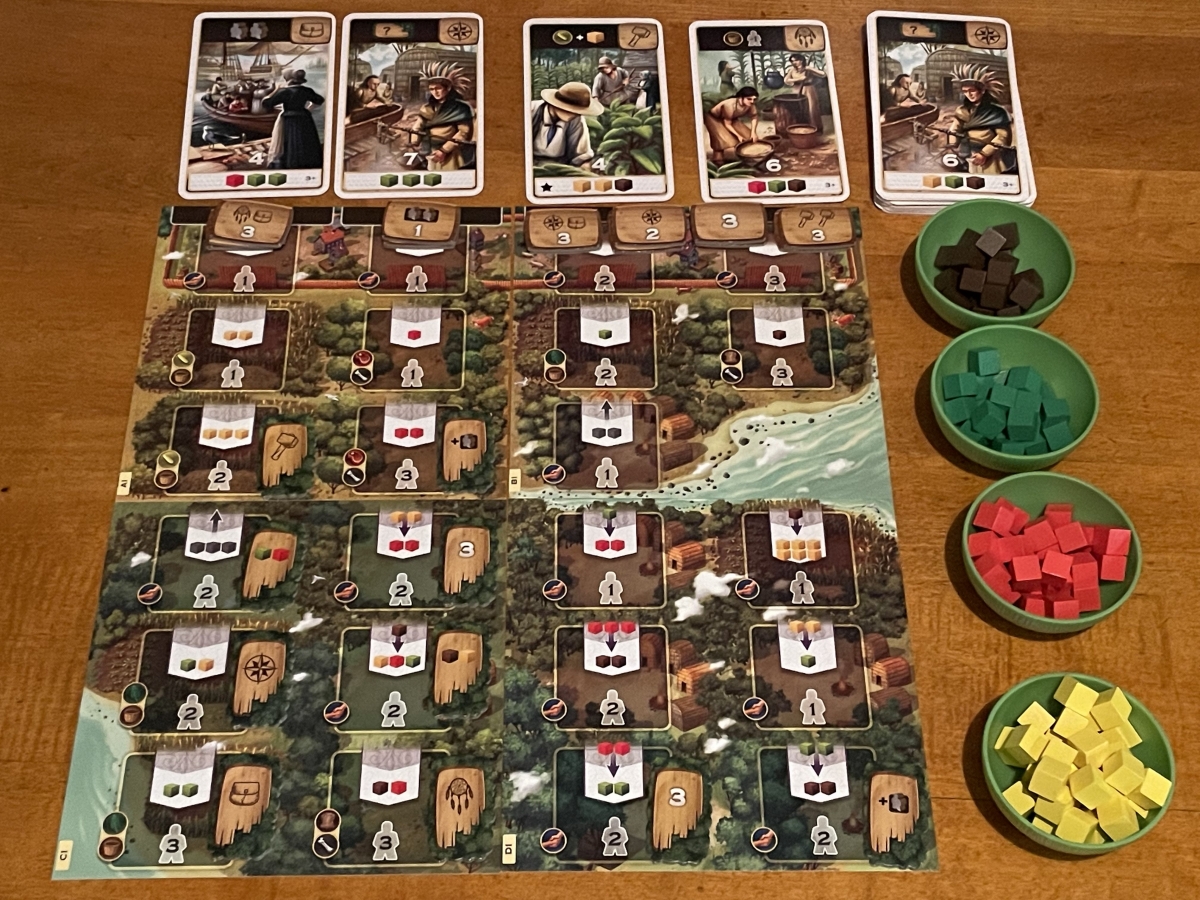 Each turn, the player has two options. Work is the first one, meaning you place settlers to use the action of the space. If the space is empty, then you just put on the number of settlers the space indicates. If another player already has settlers on a space, then you can place settlers equal to the amount of one more than what is currently there. The settlers of the other player are then returned to that player. The other choice for the player during their turn is to rest. When resting, the player takes all his settlers off the board and back to their player board.

A sign of a good worker placement game is having enough choices that you aren’t so limited that you can’t work towards your objective while not having so many that you can choose just about anything and still make progress. Since there are a limited number of spaces available at the beginning of the game everyone has the same options to try to get a scoring card. Since the scoring cards change throughout the game, strategies change. As you gain bonus tiles the scoring cards you want to get change from the other players. You have to be flexible if someone else gets that card you want to get.

One problem with worker placement games is the first player advantage. While giving players who start later more resources, the fact that players can use a space someone else has claimed does help even the playing field. You also might be planning to rest on your turn to get your settlers back when another player decides to use your spot and you find yourself in a position to work that turn, allowing you to play again quicker. The fact that you don’t need to reset the board for player rounds speeds up the game significantly too.

Later rounds of a worker placement can get lengthy because there are more options. While more spaces on the board will become available as exploration tiles are removed, there’s never an overwhelming number of options. While increasing the number of settlers during the game does give you more options, making it possible to use locations others have used increases your options more. 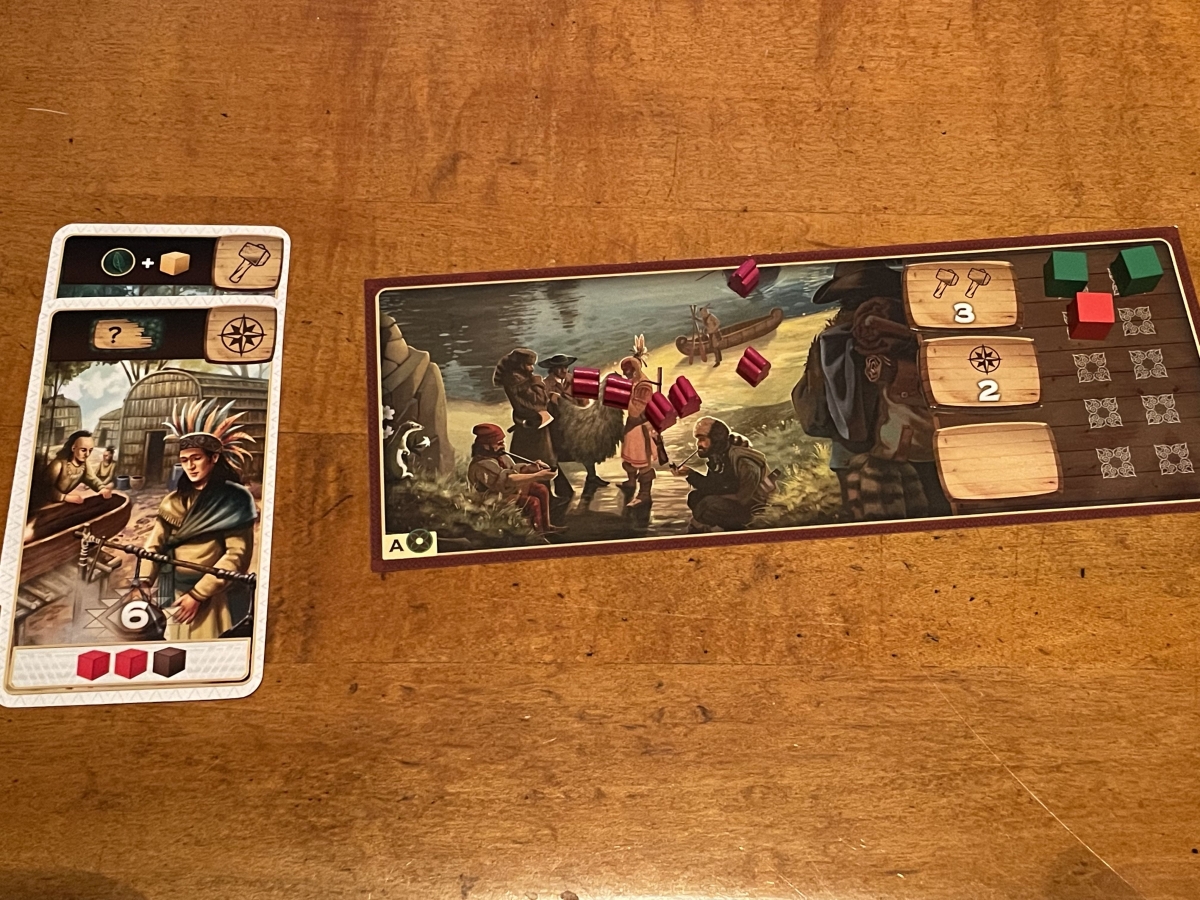 The cubes included in A New World are similar to the ones in the other Century games, while the scoring cards are similar to the tarot cards in Spice Road. The location boards are a bit thin feeling since they aren’t cardboard and get used in every single game. The only other complaint that I have about the components is the fact that the meeples used as settlers you use for placing on a location are tiny. They’re so small that they can be difficult to pick up and place. I understand that keeping the same form factor for all the boxes in the Century series is important and using less materials is a noble cause, but the production values make A New World feel a bit cheap in comparison to the other games.

A New World comes with rules to combine this game with Spice Road, Eastern Wonders, or all three together. Being able to smash up multiple games is an interesting concept and I think I’ll try it after we’ve played it enough that we want to mix things up a bit. In the meantime, playing the Century games by themselves is enough.

Century - A New World is a great twist on the typical worker placement game. Needing multiple workers to use a location and being able to use a location already occupied by someone else are easy concepts to understand. Yet these options give A New World meaningful decisions each turn. If you're already a fan of the first two Century games or you want a worker placement game with a unique twist, then getting A New World is a no-brainer.

While not working as a Database Administrator, Keith Schleicher has been associated with Gaming Trend since 2003. While his love of video games started with the Telestar Alpha (a pong console with four different games), he trule started playing video games when he received the ill-fated TI-99/4A. While the Speech Synthesizer seemed to be the height of gaming, eventually a 286 AT computer running at 8/12 Hz and a CGA monitor would be his outlet for a while. Eventually he’d graduate to 386, 486, Pentium, and Athlon systems, building some of those systems while doing some hardware reviews and attending Comdex. With the release of the Dreamcast that started his conversion to the console world. Since then he has acquired an NES, SNES, PS2, PS3, PSP, GBA-SP, DS, Xbox, Xbox 360, Xbox One S, Gamecube, Wii, Switch, and Oculus Quest 2. While not playing video games he enjoys bowling, reading, playing board games, listening to music, and watching movies and TV. He originally hails from Wisconsin but is now living in Michigan with his wife and sons.
Related Articles: Century - A New World, Tabletop
Share
Tweet
Share
Submit