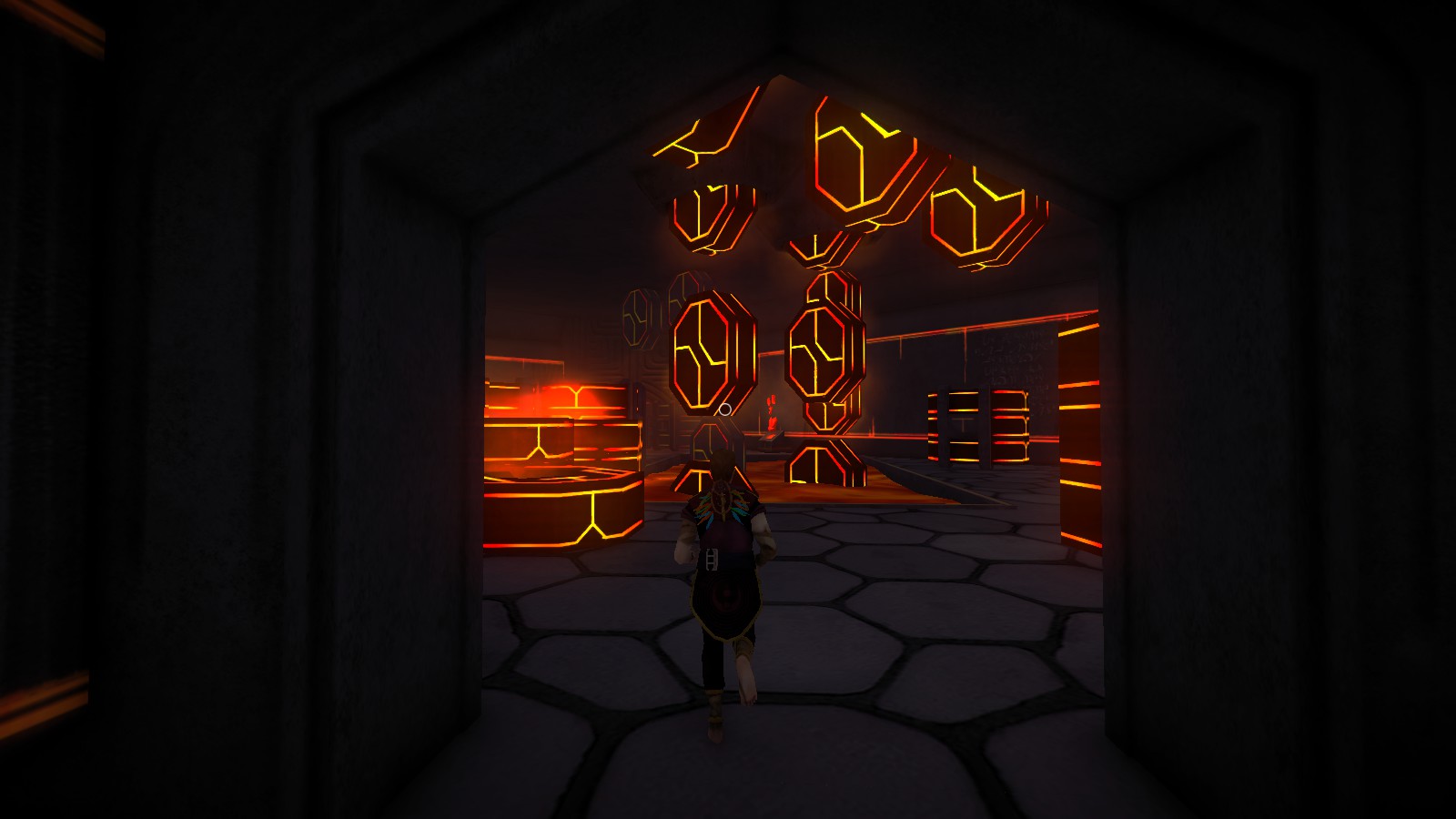 There are a lot of third-person action games that strive to make you as the player feel empowered. They make you feel powerful with gratifying powers to use that offer different ways to impact the game, exhilarating combat sequences with a variety of methods to tackle your adversaries, and compelling tales whether they be of superheroes or Jedi Knights. I’m not going to say Nor completely fails at delivering those things, but it definitely doesn’t execute on them as well as its peers whether modern or classic.

That is Nor’s biggest problem in a nutshell: execution. It’s not a bad game by any stretch of the imagination, but neither does it ever surpass what is expected of it.

These present one of the few dynamic challenges as far as enemies are concerned.

The combat is fun but has deficiencies that stem mostly from a lack of variety. The range of powers at your disposal feels limited all throughout the reasonably lengthy story mode, and though you unlock different types of powers, by the end it really feels like the depth of your pool of abilities is fairly limited. Your ability to shift the environment through terraforming is the most fun, but its usefulness is finite thanks to it requiring sand be in the area. You also have telekinesis, fire, and wind, but that’s about it. There are combinations and variations on your powers, but they don’t significantly influence the way you impact the game.

This is especially clear in the game’s paltry multiplayer offerings. You have co-op and the game can be played entirely in split-screen, then a barebones PvP mode with no progression system. Throwing rocks at other players in the PvP game mode quickly grows stale and is probably the reason for the completely non-existent multiplayer community. If you want to play the game with others, you’ll need friends because the multiplayer servers are basically deserted. The co-op also doesn’t significantly impact the way the single-player game functions, but the unpredictable fun of the combat is enhanced when you have someone beside you to laugh at the insanity.

One significant flaw in the way you move is definitely the fall damage. It feels like you can die from the absolute smallest falls, and it limits your ability to be mobile. This makes the few platforming puzzles really frustrating for the wrong reasons, and it makes the combat feel less exciting than it could. Though, not only is the damage a problem but the jump height is small. Not being able to move in a way one might expect a powerful mage can also really limits the fun and the feeling of empowerment from having magical abilities.

Still, even that isn’t the biggest problem, that would be the near complete lack of melee range options. There are no melee attacks or weapons in Son of Nor if you don’t have one of your elemental abilities, which you collect from the environment, and the “push” ability you have does literally nothing to opponents. I found this highly exploitable in the multiplayer in particular, making it almost impossible to hit another player standing right in front of you with larger, more damaging objects. That’s infuriating, considering using your telekinesis to throw objects is your primary method of attack.

The puzzles are also extremely easy, their solutions are almost always extremely clear, and even when they aren’t, they can quickly be solved with small amounts of trial and error. There are moments where things come together and they take advantage of your skillset to create interesting challenges, but few of them turn out that way. My favorite was a room filled with rotating lasers, and you have to use your terraforming to block the lasers which will kill you  instantly if you make one wrong move.

Even at it’s best moments, Nor fails to graphically impress.

The graphics also don’t give the game a boost. There is no lip-syncing for any of the voice acting, which itself varies in quality right along with the soundtrack (which does little beyond providing background noise). The environments, especially the outdoor ones, are extremely same-y, and even places that should look important appear extremely similar to the rest of the game. The character models in particular are weak, and even though the texturing on the locations you explore is fine, they are completely uninteresting with little variety in color or general appearance. The dungeons are the only place where the game breaks out of its comfort zone in this respect, but even there you will find yourself in what seems to be the same exact hallway and same exact room again and again thanks to repetitive art design and layouts.

The story also fails to provide any meaningful context to the game. There are no memorable characters, the plot holds no surprises, and things that don’t always make sense just happen around you. This was especially disappointing, as the game sets up interesting lore but fails to capitalize on it in any significant way. The way the game handles it’s silent protagonist is also strange, it feels like you’re only hearing one side of a conversation with two participants. It makes Nor’s already shabby narrative difficult to follow.

In the end, Son of Nor is a game that’s lacking. It feels unfinished, like there were more things the developer wanted to add but wasn’t able to. The combat is fun, but its low variety and the limited usefulness of your most interesting abilities makes it quickly become repetitive. The story has good setup, but fails to go anywhere interesting. The environments and characters are also boring and unimaginative.

Full of incomplete ideas, I wouldn’t call Nor bad, but it feels like it could’ve been done better with more time and imagination. I want to see a sequel, one that fleshes out the stronger elements to make it the game it could’ve been. The game is only twenty dollars, but at that price tag I’d recommend you find something else to spend it on rather than on this ultimately dull experience with little replay value.

Son of Nor has it’s moments of brilliance where its strengths are realized, but ultimately none of its best elements are developed enough to make them feel meaningful for more than a few hours. Nor isn’t bad, but it’s so uninteresting it can hardly claim to be good.

My name is Niko, I'm currently 20 years old. I spend most of my time on my computer gaming as I got hooked on videos games from a young age. While my first experience with video games was with the Gameboy Color, I first got seriously into games while using the original Dreamcast and the PlayStation 1. I played many games back then, but the highlights were definitely Pitfall 3D, Pokemon Blue, Rayman 2, and Ecco the Dolphin Defender of the Future. All games that I spent many many hours on and filled the long hours where I stayed at home mostly by myself thanks to living in unsavory neighborhoods. From then on, I pursued a lot of video game consoles. I was particularly enthralled with the Super Nintendo and Nintendo 64. As I grew up further, my tastes shifted and I tried more and more games, especially after I got a PC. My first experience with a PC RPG was Star Wars Knights of the Old Republic, and it was really the game that made games an integral part of my life. I played video games a lot back then, but ever since playing KOTOR I've been a lot more opinionated and interested in games. I even entertained the idea of wanting to be a developer at multiple points, but I just didn't have the skillset. Still, KOTOR ignited my interest in video games as a way of telling stories. I loved the ways video games could tell such large and complex stories, combining the best parts of every other medium of entertainment with the unique pieces of what video games themselves offered. Now, my favorite genre is definitely RPG's. With my primary interest being the story driven ones. Though, I still enjoy my occasional shooter and action titles I enjoy mostly great cinematic titles with good stories. Though I also enjoy the Stealth, Strategy, and Action-Adventure genres quite a bit. I also think that the PC is a wildly superior platform to any console, due to the wide variety of options. Whether it be in graphics, mods, or the selection of games themselves.
Related Articles: Son of Nor
Share
Tweet
Share
Submit