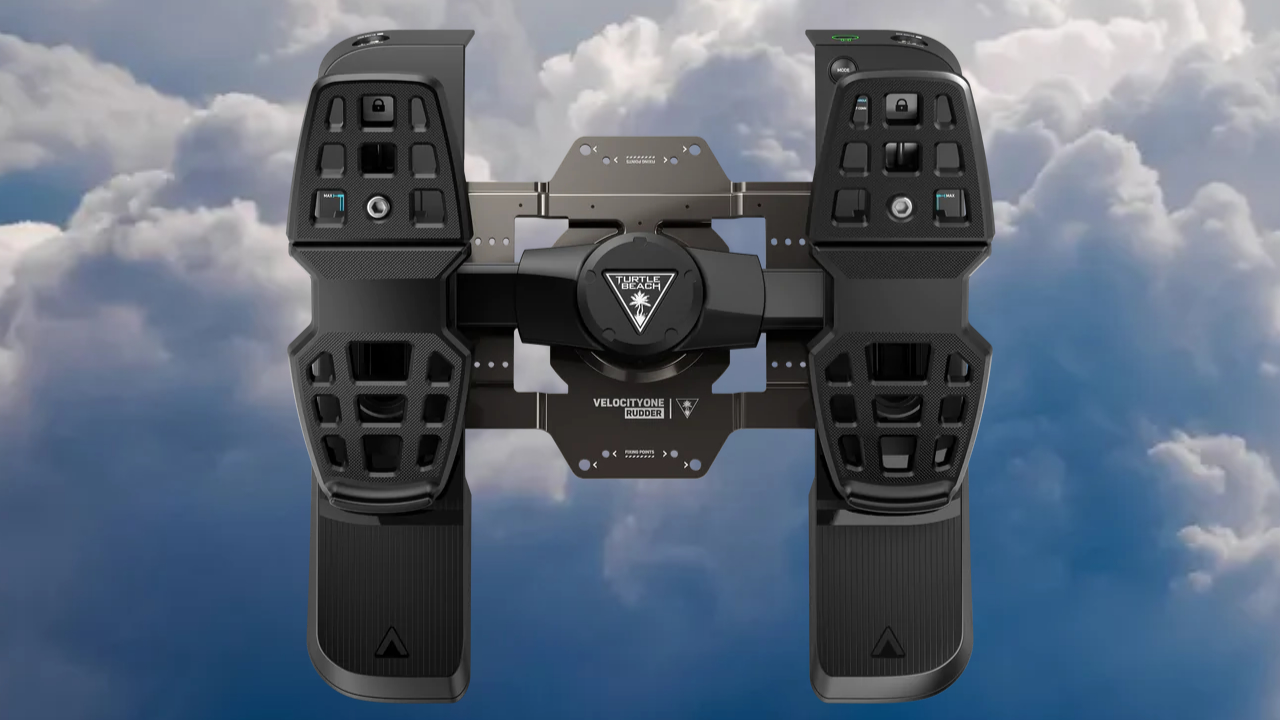 We slipped the surly bonds of Earth with the Turtle Beach Velocity One Universal Flight controller (our review) at the beginning of this year, giving us everything we needed to experience games like Flight Simulator in a way that no keyboard/mouse setup could ever approximate. That title has turned into a go-to for benchmarking, but every time I boot it up, I find myself spending a little more time than is necessary for my benchmarks just enjoying the freedom of flight. With a proper flight stick and throttle setup like the Velocity One, there’s simply nothing like it. The only thing missing from that setup is rudder pedals, and today we get to add those to our setup. Just in time for the holidays, Turtle Beach has released the Velocity One Rudder Pedals. Once again, we don our virtual wings and touch the sky.

As I set up the pedals, I immediately appreciated that they are adjustable for narrow or wider stance. While a plane like a Cessna has the pedals very close together, your larger planes offer a little wider of a stance. Here, you can simply adjust them to your comfort level – just because a smaller plane might feel cramped doesn’t mean you have to here.

The next thing I noticed is that the pedals are modular. Where a light duty aircraft has simple, short pedals with a heel hook ledge, larger craft have larger pedals. Whether you are going for realism or comfort, you can swap out these ones for either configuration with the included pedals and Allen wrench. While we are on the topic of modularity, you can also swap in an included silver or black spring sets to adjust the rudder tension level from 80nm and 60nm based on your preference.

The next thing you might notice is that these are listed as Universal Rudder Pedals, meaning you don’t have to use them exclusively with the Velocity One Universal Flight System. That said, they go together like peanut butter and jelly, so why wouldn’t you? When connected to the Velocity One, they immediately sync and are ready to go, but if you aren’t using them with that system, you can simply use a USB-A cable to connect them to your PC. Windows takes over at this point, and games that support rudder pedals (e.g. Elite Dangerous, Microsoft Flight SImulator 2020, etc.) recognized them instantly, based on my testing. It’s nice when things just work, and doubly so when it’s an input enhancement device like this one. Plugging these into the Xbox through the Velocity One Flight Controls, the Xbox immediately recognizes them and they are ready for flight.

The biggest thing a good set of rudder pedals provides is realism. It’s a strange thing to say about a pair of pedals that are simply adding an already-mapped function like yaw to the mix, but there’s simply nothing like being able to add more independent and granular control. Using an Xbox controller with Flight Simulator, you use the bumpers to yaw left or right, and frankly it’s a jerky mess that just about ruins your landing smoothness scores. Switching to the VelocityOne Flight controller alone, you’ll use those same bumpers, but they are located on the back of the yoke. Unfortunately, it can be just as jerky, so you’ll probably be using a mixture of turning and this binary yaw function to land smoothly. If you are using a third party HOTAS joystick, you might also be using a twist function on your stick to yaw left and right. While this twist function might be analog, it’s hardly accurate, often resulting in the same jerky motion as the stick returns to center. Rudder pedals change all of that.

The first time you fly with a set of rudder pedals, you’ll immediately notice the smoothness an analog input makes when it comes to subtle adjustments. I’m not a pilot, but I’ve taken a few courses, and there are a few rules to keep in mind to ensure your passengers don’t revisit their lunch. You use the yoke to turn the plane, but to do it smoothly you “step on the ball”, which is to say, you’ll press the rudder pedal as indicated by the inclinometer, a.k.a. the “turn and slip indicator”, or “T/S” as you might see it indicated on the flight controls. This device has a small metal ball in it that indicates the overall aerodynamics of your turn. “Step on the ball” means pressing the rudders on the side where the ball is headed. When the ball is on the opposite side of the turn you’ll feel it in your stomach. This “skidding” feeling, or feeling like you are being pushed sideways, can be counteracted by “stepping on the ball” to get it closer to center. If the ball is in the opposite direction of the turn, that’s called a “slip”, and that’s going to give you the same feeling, but like you’re being pulled towards the inside instead of pushed from the outside.

All of this to say, there’s as much an art as technique in smoothly turning a plane without ending up in a situation where you are either causing additional stress on the airframe or burning your fuel unevenly from your tanks. While Flight Simulator doesn’t take into account uneven fuel consumption between your tanks (or at least that I know of), it very much takes into account how well you step on the ball. Mastering this technique is one of the most important parts of flying smoothly, both in real life and in the simulation, so if you intend on either learning the craft for real, or just want to make your game as realistic as possible, you’ll want pedals.

There aren’t a lot of pedals out there for flight simulation, but to say that the few that exist vary wildly would be a huge understatement. Let’s look at their primary differentiators and characteristics, and why they might matter.

Some rudders use a simple lever system, actuating linearly like a gas pedal on a car – the Logitech Flight Simulator Pedals ($179), for example. These resemble the controls you’d find on a Cessna. Some pedals are literally just generic controls, looking more like the pedal sets you’d find for racing or for heavy equipment – the kind you’d find with any racing wheel setup. Thrustmaster makes a set called the Thrustmaster Pendular Rudder Flight Simulator Rudder Pedals that replicate the full feeling of real pedals by using a suspended mechanism to create the push/pull motion you’d find in a real plane, but at $599 dollars, they are prohibitively expensive for most would-be pilots. Thrustmaster also makes a pedal set ($139) that slides up and down a rail set to approximate the push/pull action on a plane, but having owned two sets of these, I can say they stick on that rail entirely too often. The Turtle Beach Velocity One Rudder Pedals use a Rudder Axis that pivots on a friction-free disc in the center of the device, smoothly moving both feet in a way that conveys the linearity of the pedal press in a real plane, but maintaining the push/pull smoothness of something like the Pendular Rudders from Thrustmaster. When you release pressure, they return to center, just like the real thing, in a smooth motion and with some light pressure to simulate the tension of the rudder tension when in the air, or the nose tiller wheel when on the ground. 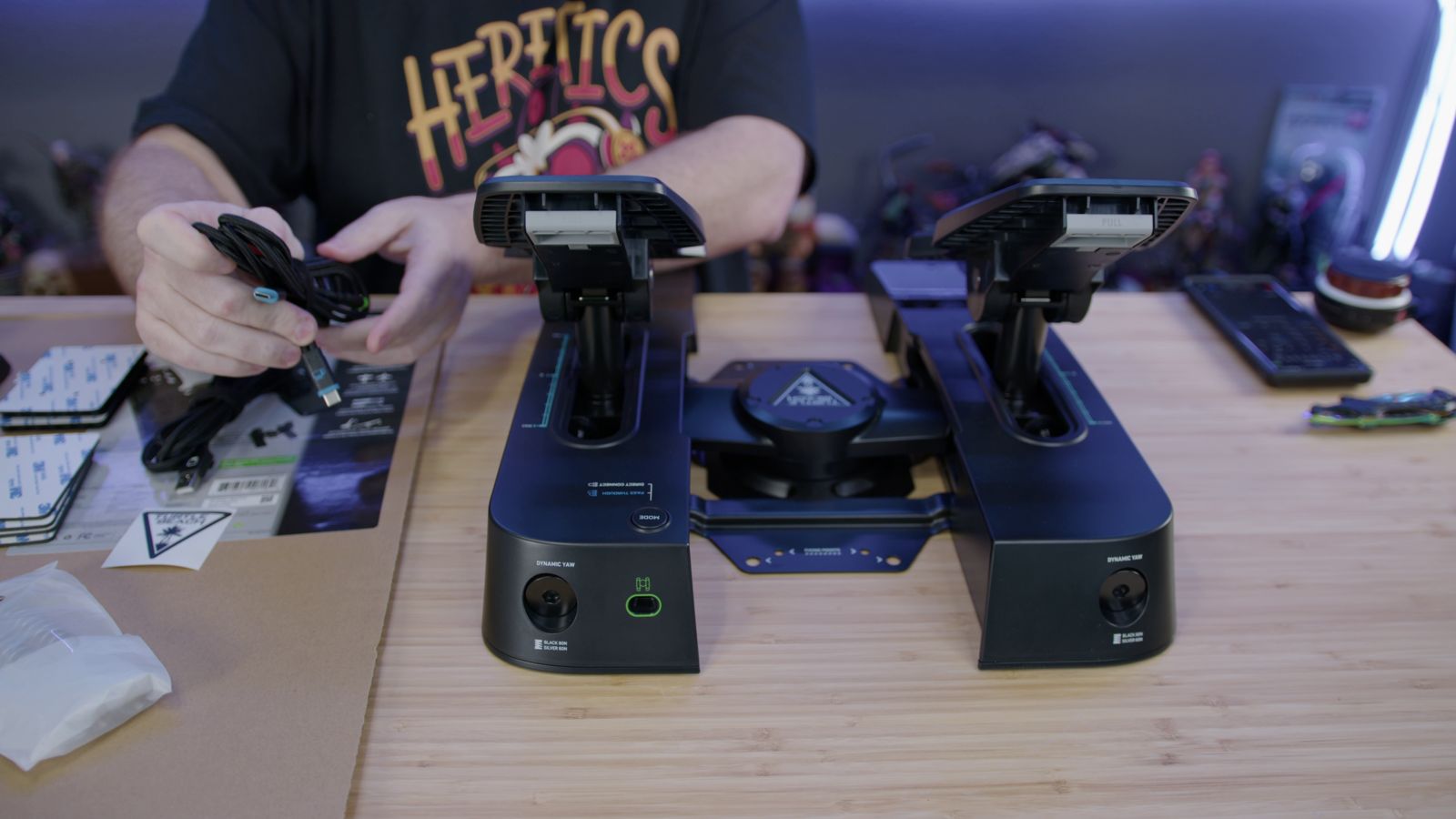 The other function you’ll find at the tip of your toes you won’t find on cheaper pedals – a differential braking system. Just like stepping on the ball is an analog motion and feeling, brakes are also an analog action. You’ll want to gradually apply the brakes, not just slam them on full blast as soon as you land. The Velocity One Rudder Pedals sport a set of spring-actuated brakes you apply by pushing your heels towards the ground. These are individually controlled, so you can adjust your plane’s trajectory on the ground with gentle left and right brake applications to steer onto your centerline. When you release your heel pressure, the brakes release, as they should.

Included with the rudder pedals are three mechanisms to prevent slippage. The first, a smooth rubber mat surface, is great for a tile or wood floor. Next, you can use the rubberized grip with the small nubs on the bottom. This more aggressive grip is great for carpet or porous tile surfaces to prevent movement. The third isn’t so much a grip as much as being prepared for the full chair experience – pre-drilled mount holes. If you are using a chair, or better yet, the upcoming Yaw2 (video), this option will keep your pedals locked in place. Turtle Beach also has a fold-flat “Flight Stand” coming in mid-December as an option as well, if you are shopping for the holidays.

There’s really only one hiccup with both these pedals and the flight yoke – the firmware. On more than one occasion, I’ve struggled with the firmware update process, leaving my systems stuck in update mode. I had to use a powershell script to reinstall the correct firmware to force the reboot to get the system back into a usable state. I had to hit the pedals four times with the update utility to get it to take. Be patient – it’ll go, and there are ways to unbrick the system if you are unlucky, but know that the firmware can be a bit of a struggle at times. There’s a reason why the update utility has 2 stars on the Microsoft Store.

I don’t know how else to say it – there’s nothing like flight to free the soul. Peripherals like these rudder pedals elevate that experience to the next level, providing another connection point with flight. Whether your vehicle is a Cessna, Boeing 747, intergalactic trash hauler, or high-speed space fighter, adding pedals to the mix makes you feel like you are in that cockpit doing it for real. And in the end, is that sort of escapism why we game in the first place?

From the excellent build quality and modular design to the fluidity of motion and pricing, the Velocity One Rudder Pedals are a must-have for any flight fan.

Ron Burke is the Editor in Chief for Gaming Trend. Currently living in Fort Worth, Texas, Ron is an old-school gamer who enjoys CRPGs, action/adventure, platformers, music games, and has recently gotten into tabletop gaming. Ron is also a fourth degree black belt, with a Master's rank in Matsumura Seito Shōrin-ryū, Moo Duk Kwan Tang Soo Do, Universal Tang Soo Do Alliance, and International Tang Soo Do Federation. He also holds ranks in several other styles in his search to be a well-rounded fighter. Ron has been married to Gaming Trend Editor, Laura Burke, for 21 years. They have three dogs - Pazuzu (Irish Terrier), Atë, and Calliope (both Australian Kelpie/Pit Bull mixes).
Related Articles: Hardware, Turtle Beach Velocity One Rudder Pedals
Share
Tweet
Share
Submit