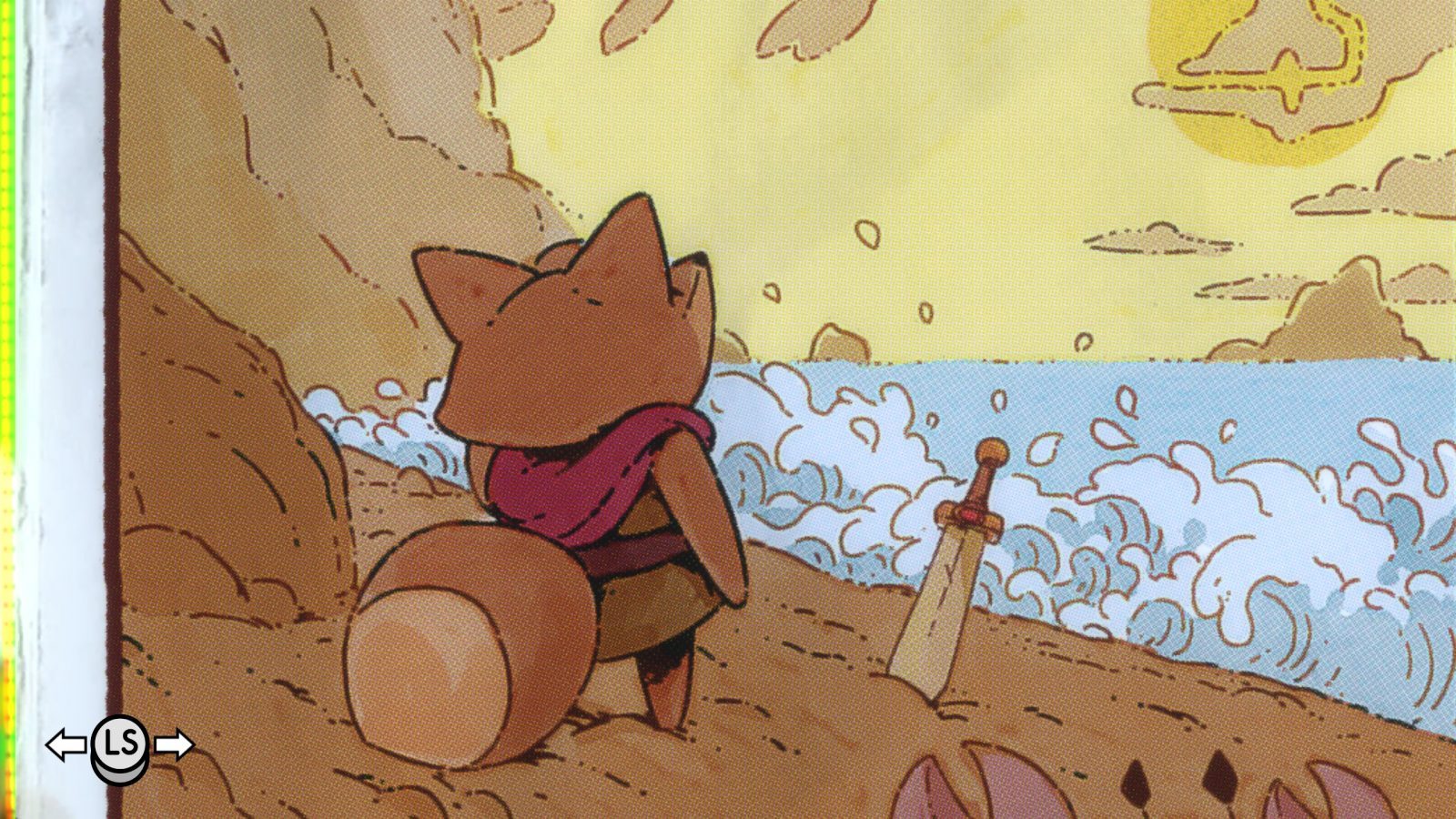 A tale as old as time – you wash up on a beach with only the clothes on your back and set about exploring a mysterious location full of secrets to gain access to a spectral entity’s hiding place. Ok, maybe not as old as time, but at least as old as 1993. It’s no secret that Tunic is inspired by The Legend of Zelda. That first sentence could describe this game or Link’s awakening, but there’s more to Tunic than an homage. A lot more, in fact. When I started playing, I expected a cute, isometric adventure through a gorgeous land of swords and sworcery wielded by an adorable fox, but as I progressed I found not only that, but also a rich world filled to the brim with secrets and hidden depths to discover.

Tunic is one of those games that I recommend you dive in with as little knowledge as possible. If you’re looking for a recommendation, it’s one of the most well crafted games I’ve played in a long time and possibly surpasses some games in the series it takes inspiration from. Discover as much as you can on your own, then share what you’ve learned with the community I have no doubt will spring up around Tunic to solve its myriad mysteries. For full disclosure, I played most of the game with no outside help, but around the end of the game I made use of the press discord we were invited to to share what I had discovered and help other reviewers through the game. (Shoutouts to Alex Spencer of Edge!) Tunic is well worth your time on its own, but the way it encourages you to share theories and ideas about game mechanics and puzzles, much like kids sharing playground rumors about games like pokemon, takes it to another level.

In Tunic, you take on the role of a little fox exploring the land you washed up on. Early on, you discover a spectral fox person trapped in a magical prison and set about freeing them by collecting three colored keys. It’s fairly typical on the surface, but again there’s a lot more to it as you get further in that I am loath to spoil. While you start with nothing but the clothes on your back, you quickly find several items to use by assigning them to the X, Y, and B buttons such as a stick (which you essentially replace with a sword), a magic wand, or even a gun. Hidden throughout the world are also pages of the game’s manual written in the gibberish language the game uses. By interpreting the pictures and what little English is in there, you figure out how the game works and the full breadth of your moveset. While it’s easy to figure out you can roll by tapping A, it’s less obvious that you can extend the roll by holding the button or run by holding the button for even longer. There are quite a few moves you have inherently that you don’t discover until well into the adventure and even after the credits roll, so replays and speedruns are bound to be incredibly interesting to watch.

The use of the gibberish language reminds me a lot of playing games in other languages. This was how I first experienced some of my favorite titles like Mother 3, Cave Story, Persona 5, Dragon Quest X, and more. There’s a certain magic to doing this – everything is entirely up to your interpretation – and Tunic manages to capture this lightning in a bottle both in its vague story and mechanics. The manual does give a lot of context with some gorgeous and adorable art with notes scribbled in some margins, like borrowing a game from a friend, but that context can change drastically as you acquire more and more pages. I would love to own this thing physically instead of having to press select to bring it up, but I am very glad I had the chance to discover it in the way the game intends first. That’s not an issue mind you, it’s just so beautiful and fascinating I want to hold it in my hands. 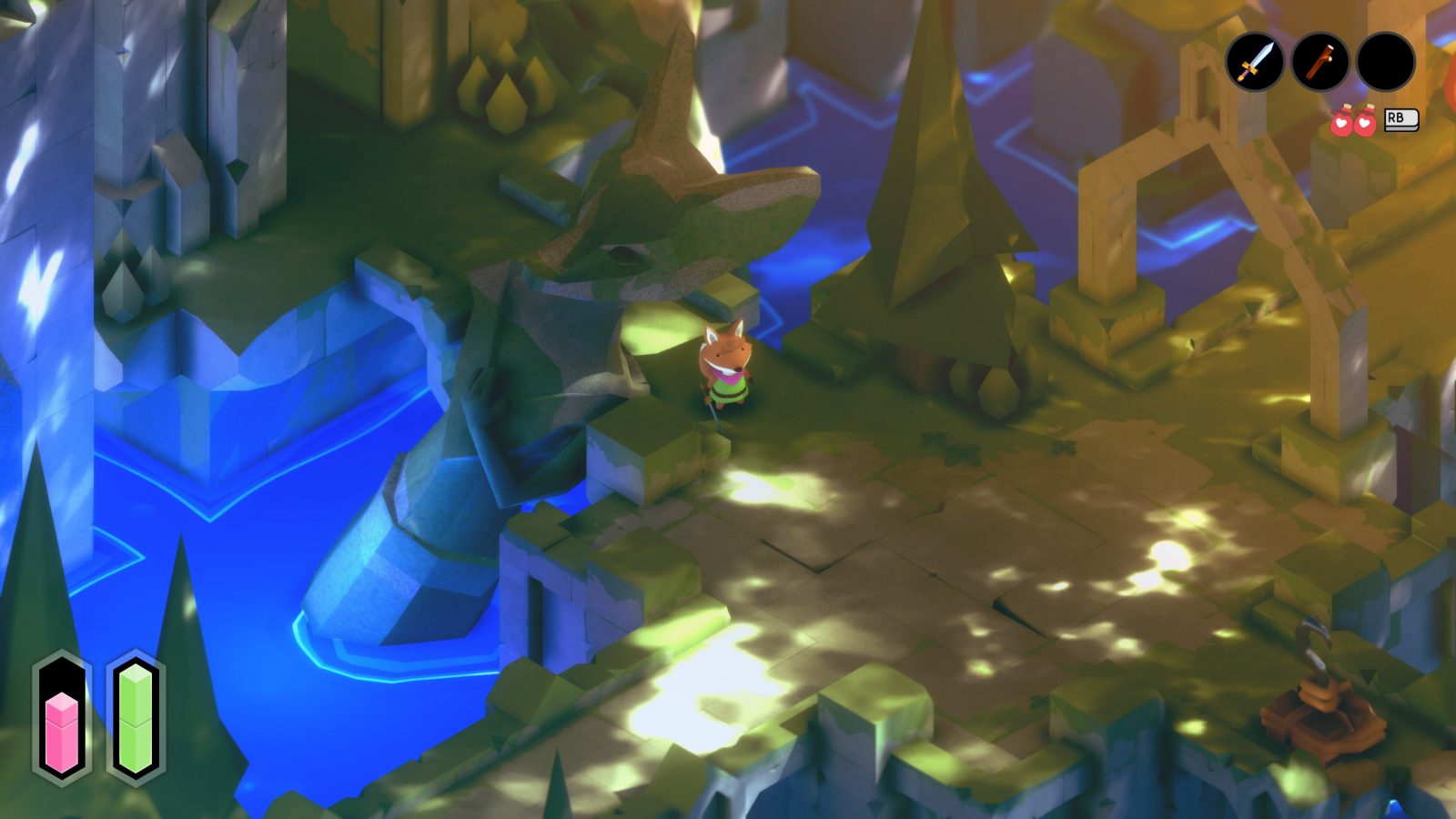 With the pervasive mystery, you are left to discover most mechanics, items, and puzzles all on your own. The game does have some familiar mechanics, however, including a Dark Souls-esque death system which leaves behind a bit of currency (it doesn’t have a name, so I call them Bits) for you to recover when you die as well as flask charges that restore your health. In the bottom left corner, you have two (later three) meters: pink for HP and green for Stamina or SP. They start off small, but you can increase them – though to say how would spoil one of my favorite discoveries. HP is pretty obvious, if you get hit it goes down and when depleted you are sent back to the last shrine you activated, but even that has some interesting twists to it later on. SP is consumed by rolling or blocking with your shield, but only regenerates when not performing actions such as drinking a flask, running, or blocking. This gives the combat a surprising depth and difficulty, encouraging you to learn each enemy and boss’ pattern of attacks (aided by the manual) to know just when to dodge, attack, or hang back to restore your stamina. It’s a lot of fun and pretty tough, but the game does have accessibility options to aid in play such as a no fail mode, unlimited stamina, or even reducing flashing effects, motion blur, and screen shake.

This is very hard to talk about without spoiling anything, but rest assured the puzzles in Tunic are top notch. Pretty much every single one had an immensely satisfying “ah ha!” moment and I’m still not done finding every puzzle or secret the game has to offer (mark my words though, I will 100% this game!). Thanks to the isometric perspective, there are a ton of hidden paths that lead to treasure chests containing bits to spend at shops or even new items to equip; I didn’t find the gun until 12 hours in, a bit after I had beaten the game. You’ll also find more passive items (I’ll call them Stickers) to equip in slots, the number of which you can increase through certain means. I don’t know what most of these do, but those that I have discovered can increase the drop rate of HP restoring hearts or reduce stamina consumed when blocking. Tunic has so much to see and do in its world that I’m itching to get back to it even as I write this. 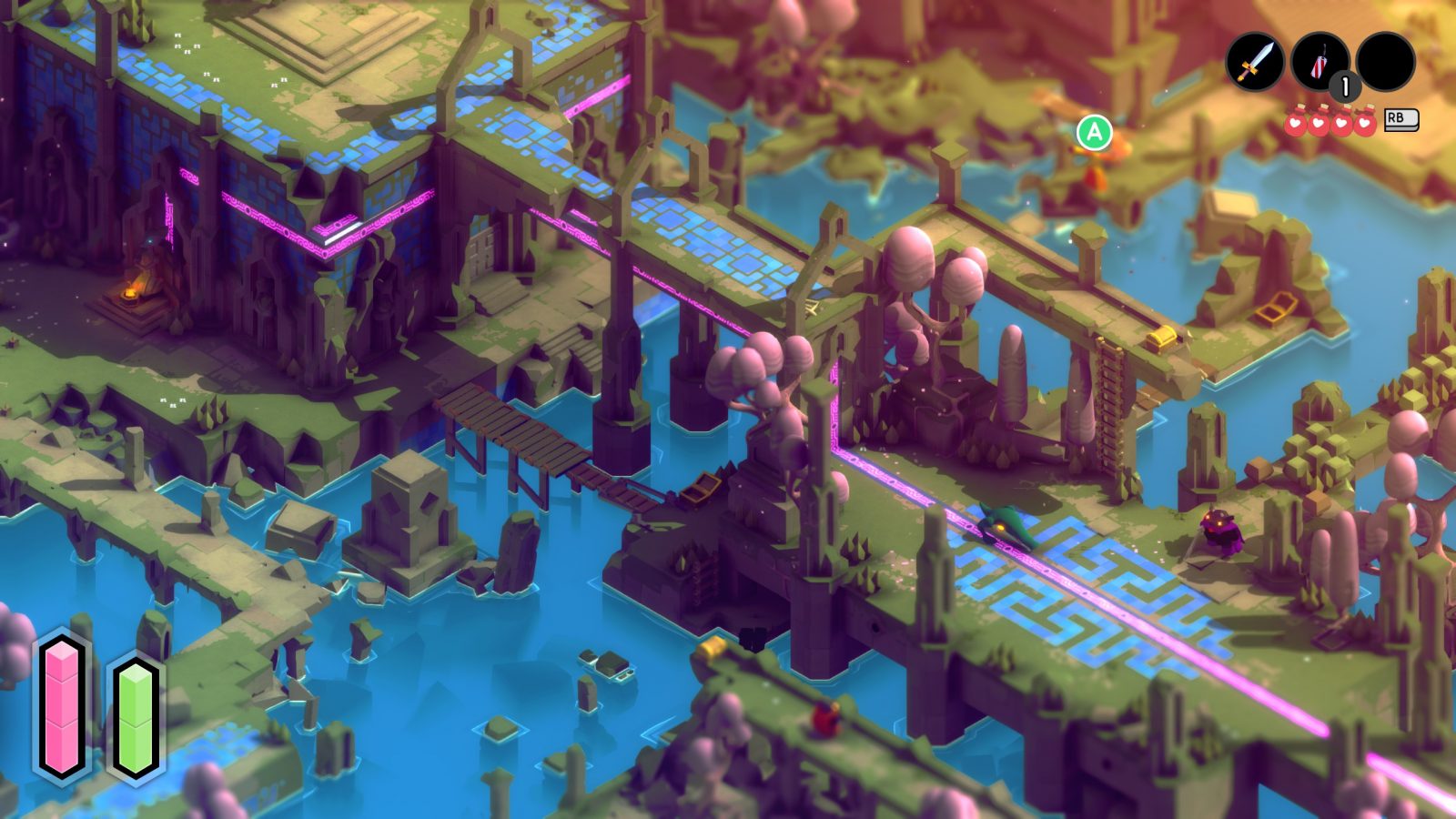 It also helps that the game is impossibly beautiful, both visually and in its soundscape. The world of Tunic is colorful and bright, with most things made of sharp, geometric shapes that somehow manage to look soft and inviting. It’s a bit like playing with your toys as a kid with your imagination actually bringing everything to life. Along with some wonderful ambient noises, Tunic’s soundtrack is full of bangers that dynamically change depending on where you are and what’s going on around you. These beautiful songs really help to give you the feeling of adventure, which is what the game is all about – a magical, adorable adventure.

Tunic sits among the pinnacle of indie titles and is just as fun as it is cute and colorful. There are an astounding amount of secrets to discover in the game and, once you’ve found everything, you can easily play it again and again to do things in a different order using your knowledge. It’s a delightful experience that I just can't get enough of.

David is the kind of person to wear his heart on his sleeve. He can find positives in anything, like this is a person who loved Star Fox Zero to death. You’ll see him playing all kinds of games: AAAs, Indies, game jam games, games of all genres, and writing about them! Here. On this website. When not writing or playing games, you can find David making music, games, or enjoying a good book. David’s favorite games include NieR: Automata, Mother 3, and Gravity Rush.
Related Articles: Indies, TUNIC
Share
Tweet
Share
Submit