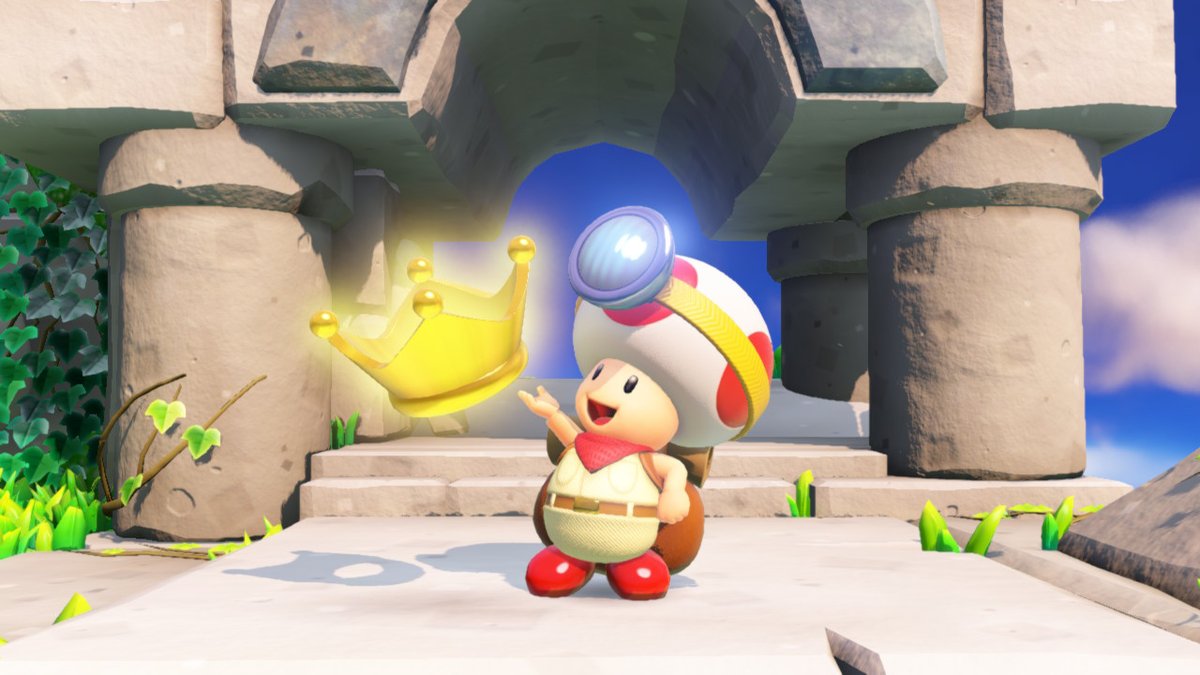 If there’s one thing Nintendo fans have been clamoring for, it’s extra downloadable content for the Switch’s premiere Mario title. After all, being immersed once more in that title’s stellar worlds and tight mechanics would be a treat, as most everyone has already extracted the final ounce of content from the base game. Well, instead of satiating the fanbase with the helping of new Super Mario Odyssey kingdoms that myself and many others have been pining for since the fall of 2017, Nintendo opted to instead revitalize Mario’s tagalong, puzzle-prone ally Captain Toad in the aptly titled Captain Toad: Treasure Tracker Special Episode. Priced at a cool $5.99, this budget-priced content drop adds eighteen new challenges to the puzzling adventure, imbuing the experience with an added flame, albeit one that burns out quickly. Such is the concession of the Special Episode–while it does add thoroughly enjoyable, well-designed challenges, the scant price tag brings with it an equally scant runtime and scope making this DLC not as fulfilling as it otherwise could have been.

Continuing the base game’s overarching storybook structure, the Special Episode adds a new book to the home screen, accordingly titled “Special.” From here, you can access all eighteen of the new missions. However, this DLC deviates from the established course by varying the mission objectives themselves–a welcome change from the near-omnipresent “collect the star” directive from the base game. Here, the challenges range from nabbing a series of mini-crowns strewn across the stage within a strict time limit to climbing a 30-floor gauntlet by plucking transportation-cube wielding, agile Piranha Sprouts from the dirt as a mummified Toad chases you around the stage. 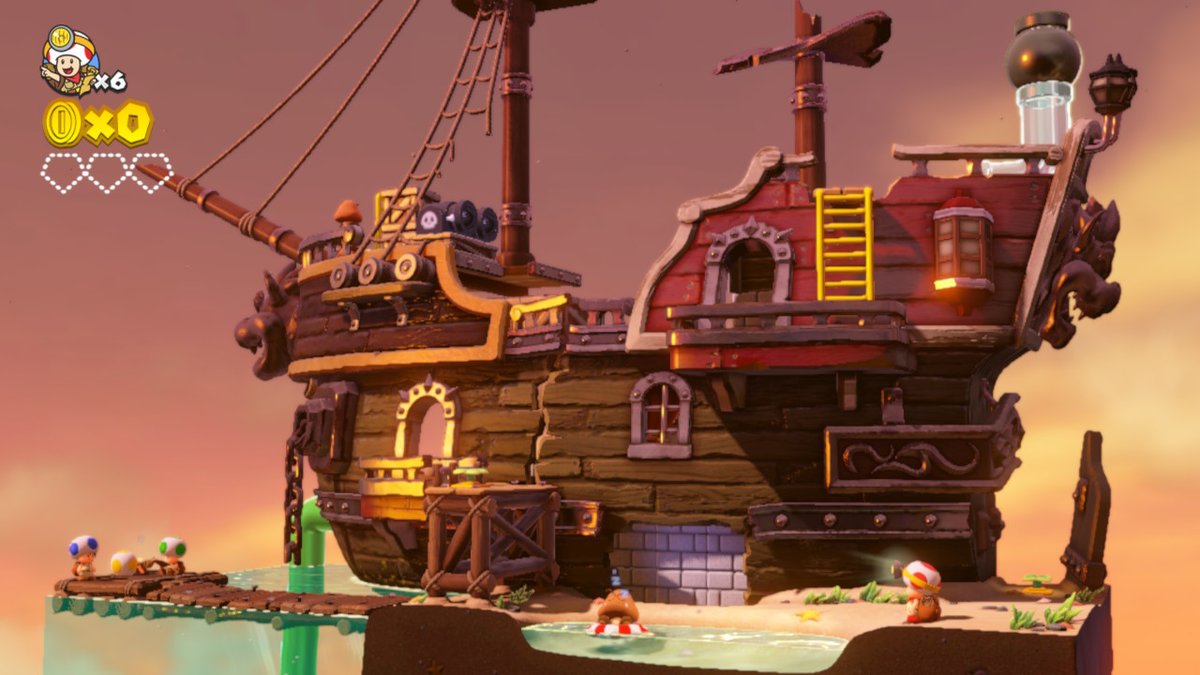 If those sound more complex than simply reaching the goal, that’s because they are. As such, this DLC felt rather refreshing, bending and twisting the established Captain Toad mechanics and motifs in fun ways. At the end of the day, you’re still maneuvering Captain Toad or Toadette around puzzle box environments, relying on your wit and careful footfalls to make up for Toad’s lack of a jump. Nevertheless, revisiting these core concepts in new ways certainly made this DLC more unique than I was expecting it to feel. Another strength of this DLC are the environments in which it takes place. From a dessert-themed island to a sunset pirate ship, these new places are loads of fun to poke around in. In fact, my only gripe in this regard is that there aren’t more brand-new stages, which speaks to the DLC’s largely truncated scope in general.

The lion’s share of missions in the Special Episode feature stages directly repurposed from the main game, just given a new twist. Whether that is a spooky night time motif complete with myriad Boos to contend with or the aforementioned mini-crown mission-type, these changes do enough to make the stages feel fresh and fun. That said, I still feel a pang of disappointment when I contrast the creativity of the brand-new stages to that of the repurposed ones. It simply feels like Nintendo didn’t allocate very many resources to the DLC’s development–which is a shame. In addition, not every level and remix here feel as thought out as its peers, as some levels seem fully designed around the game’s new, free co-op mode while others feel very-much single player oriented. While all levels can be played in either format, not every level feels exactly right in both playstyles. While this did not majorly affect my enjoyment of the DLC, I found it odd and somewhat cumbersome on the part of the developers in what is otherwise a very tight and focused project. 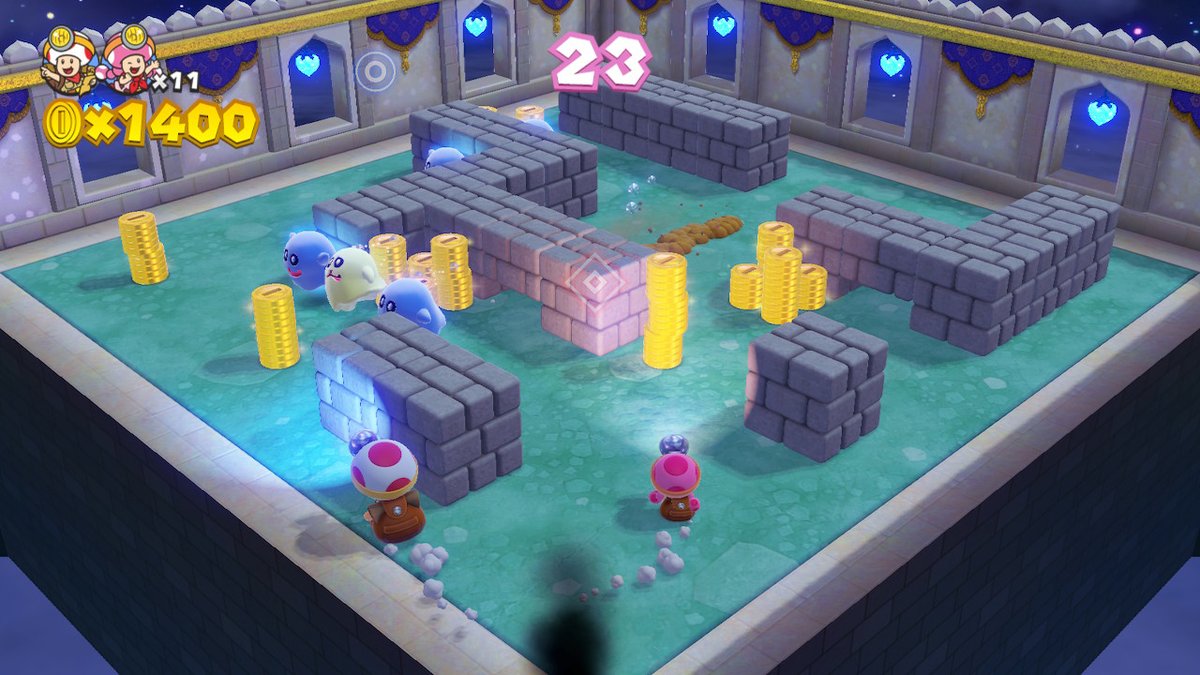 Even with those negatives it cannot be understated just how much fun the Captain Toad: Treasure Tracker Special Episode is. This is doubly true now that, through a free update released last month, the game features true co-op. I blasted through the entire DLC in an afternoon and played a majority of it in co-op with my aunt. That is the optimal way to experience this DLC, in my opinion. My aunt and I shared pointed focus and rancorous laughter as the stages allowed and by the end we found ourselves smiling and wishing for just a bit more. This truly is some of the most fun I’ve had with local Switch multiplayer in quite a while.

In many ways, I found this DLC stronger than the base Captain Toad experience. While a portion of that sentiment is undeniably due to the addition of actual co-op external to this Special Episode, the varied level objectives and new locations stand above much of the base game. That said, my greatest takeaway from the DLC is that I simply want a Captain Toad sequel. The team clearly has so many fresh and fun ideas to implement into this world still, but the Special Episode wasn’t quite the place to do it. It’s simply too truncated and too low-budget to fully demonstrate where the Captain is in 2019. It is a great showcase for where he could be, but the short runtime and abundance of remixed content just hold these creative concepts back. Nonetheless, I had a blast with the Captain Toad: Treasure Tracker Special Episode, especially in co-op. At $5.99, I think the content is appropriately priced. I just wish that the price tag was $20 dollars instead, with a commensurate amount of content. Alas, the DLC is what it is–a fantastic advertisement for a potential Captain Toad: Treasure Tracker 2. Get on it, Mr. Nintendo!

The Captain Toad: Treasure Tracker Special Episode delivers consistently fun and refreshing puzzle action. Aiming higher than the base game, this DLC stretches the Captain Toad mechanics and concepts in new ways, while also offering interesting new settings to explore. That said, the Special Episode’s reliance on remixed content from the base game and truncated runtime hold it back from being truly great. Nonetheless, this DLC offers an afternoon of colorful, creative single player or co-op entertainment.

Abram is an aspiring games journalist with a soft-spot for titles published by a particular company that starts with N, and ends with -intendo. When he's not playing, or writing about, video games, Abram is most likely ranting to no one in particular about various films he's seen, or grabbing the sketchpad to do a bit of drawing.
Related Articles: Captain Toad: Treasure Tracker Special Episode
Share
Tweet
Share
Submit