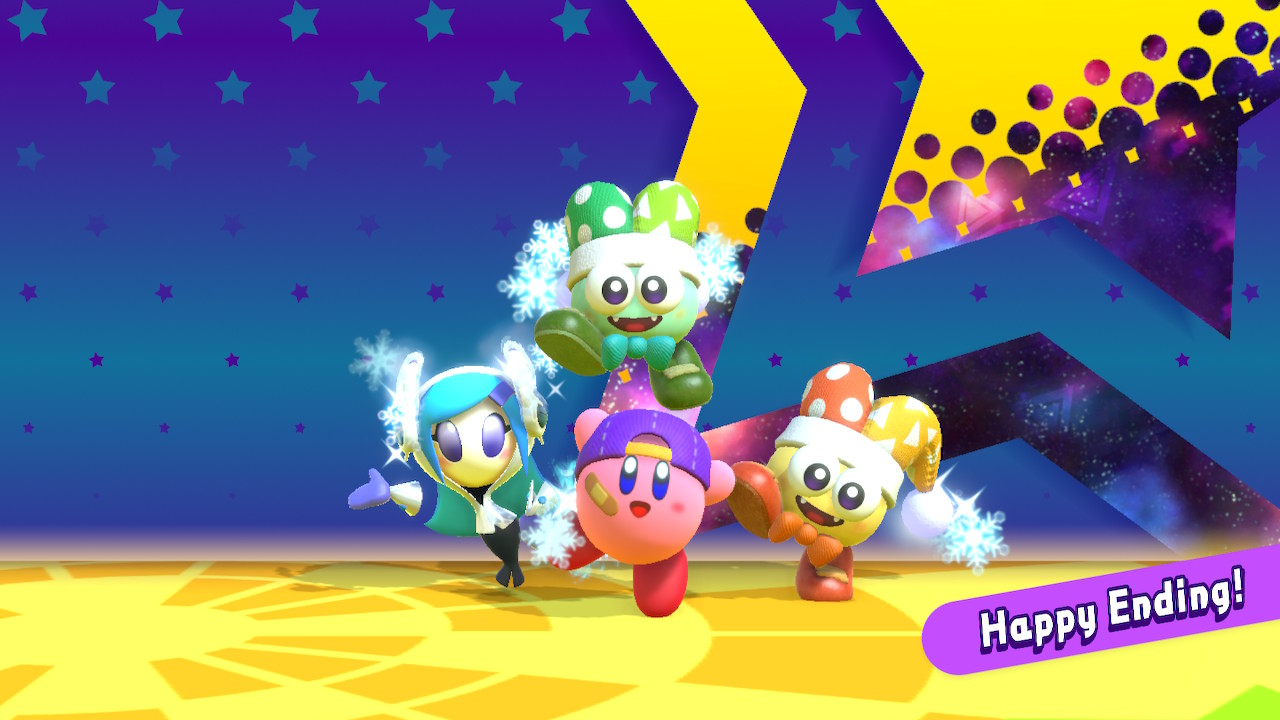 For the past few years, Nintendo has taken a new approach for several of its games. Instead of shipping every modicum of content on day one, they have been doing a slow roll-out of free updates, giving life to older titles. ARMS received new characters and stages over time, and Splatoon 2 is still constantly receiving weapon updates over a year and a half later. Kirby Star Allies is an outlier, as unlike the other two, it’s primarily a single-player game that has received free character updates in the form of “waves” over the past year, but the final wave added something surprising. The final wave of free DLC wasn’t just a new trio of characters, it added a new mode too, and in doing so, fixed everything that was wrong with the base game.

In order to address what has been fixed, we have to first identify the problems. In my initial review when Kirby Star Allies was released a year ago, I mentioned that there were three major issues: the level design was lacking while catering to a multiplayer layout rather than the great single player focused design we received in the 3DS Kirby titles, bosses were too easy and were decimated by a goon squad of multi-talented minions at your disposal, and the length wasn’t reflective of the cost of the game as the sub-games could not make up for a short single-player campaign. The following impressions will spoil the ending of the campaign as well as the ending of the modes initially received upon completion of the game, as a fair warning for anyone yet to dive into the world of the Jamba Heart. 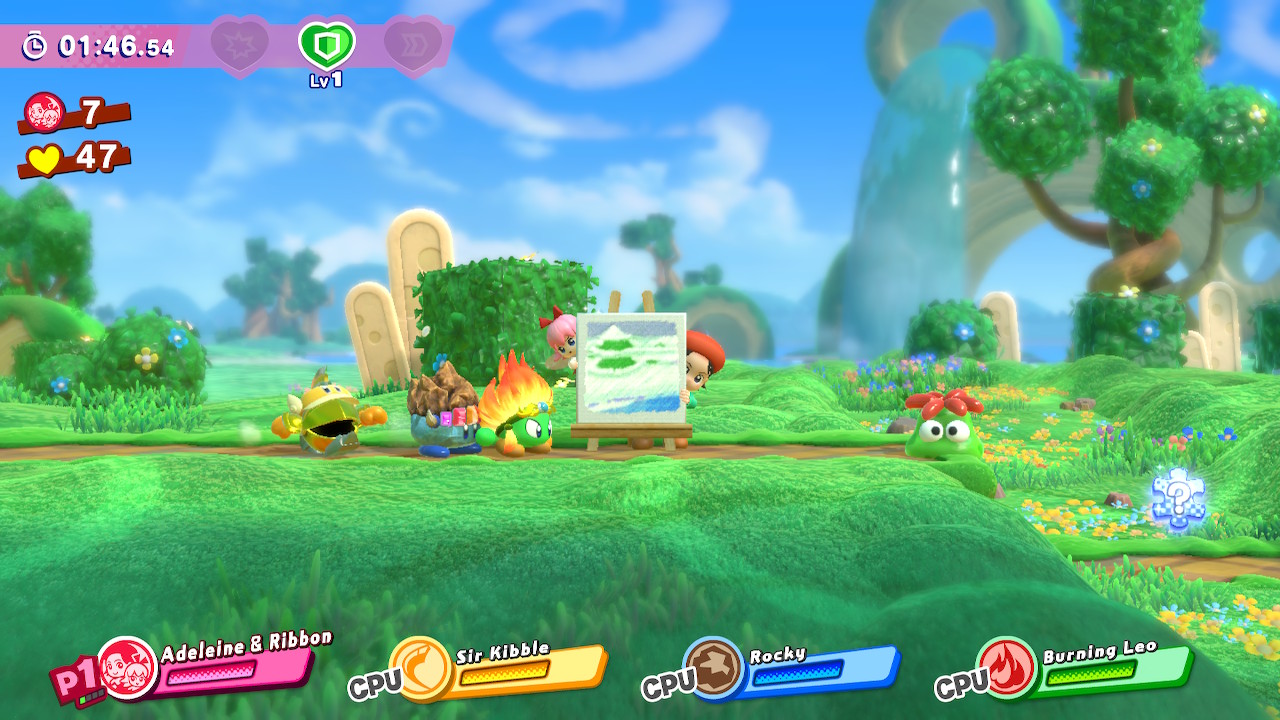 If you haven’t finished Kirby Star Allies, now may be a good time to turn back!

The plot of Kirby Star Allies is simple. Hyness, a cultist tempted by the dark Jamba Heart, is seeking to summon an all-powerful being. At his side are three mage-sisters, Francisca, Flamberge and Zan Partizanne, who are very faithful to Officiant of Doom and his ideologies. Together, they planned to use the Jamba Heart to resurrect the dark lord, Void Termina, who is implied to be responsible for previous villains, Dark Matter and Zero. Upon Void Termina’s resurrection, Kirby and his Star Allies defeat it, preventing the birth of a new age of terror.

While everything ends well for Kirby, who has saved the day once again, we’re left questioning the fates of the mage-sisters and Hyness. It’s implied that they weren’t killed when Void Terminal absorbed their powers (and were ejected from his body after the first half of the fight), but they aren’t mentioned again afterwards. 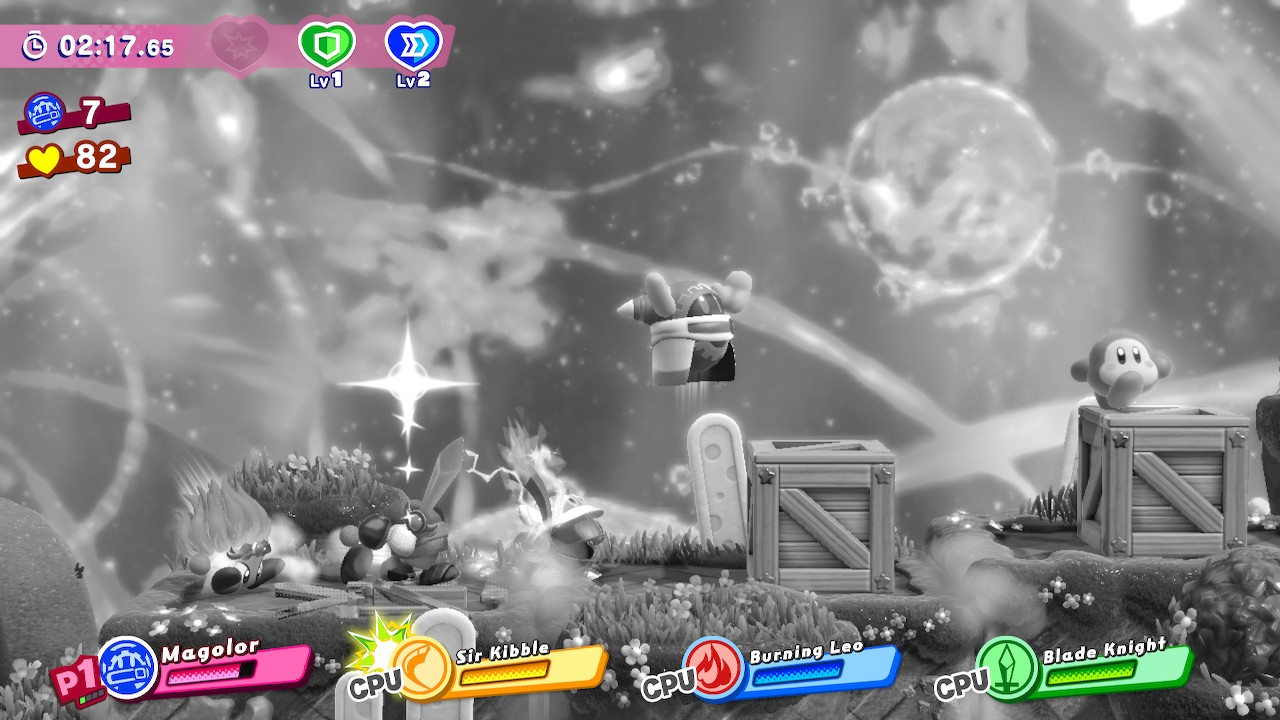 Upon completing the main story, “Guest Star ???? Star Allies Go!” and “The Ultimate Choice” are unlocked, functioning as the game’s extra mode and arena respectively. Guest Star focused on the player using a single Star Ally (or, ability, if you will) throughout a truncated version of all four worlds, with the fourth being split into two “levels.” The end of this mode had players fight on an alternate version of the final boss room from the main game against a new Meta Knight-like swordsman, Morpho Knight (who has his own interesting implications that I’ll touch on at a later date). 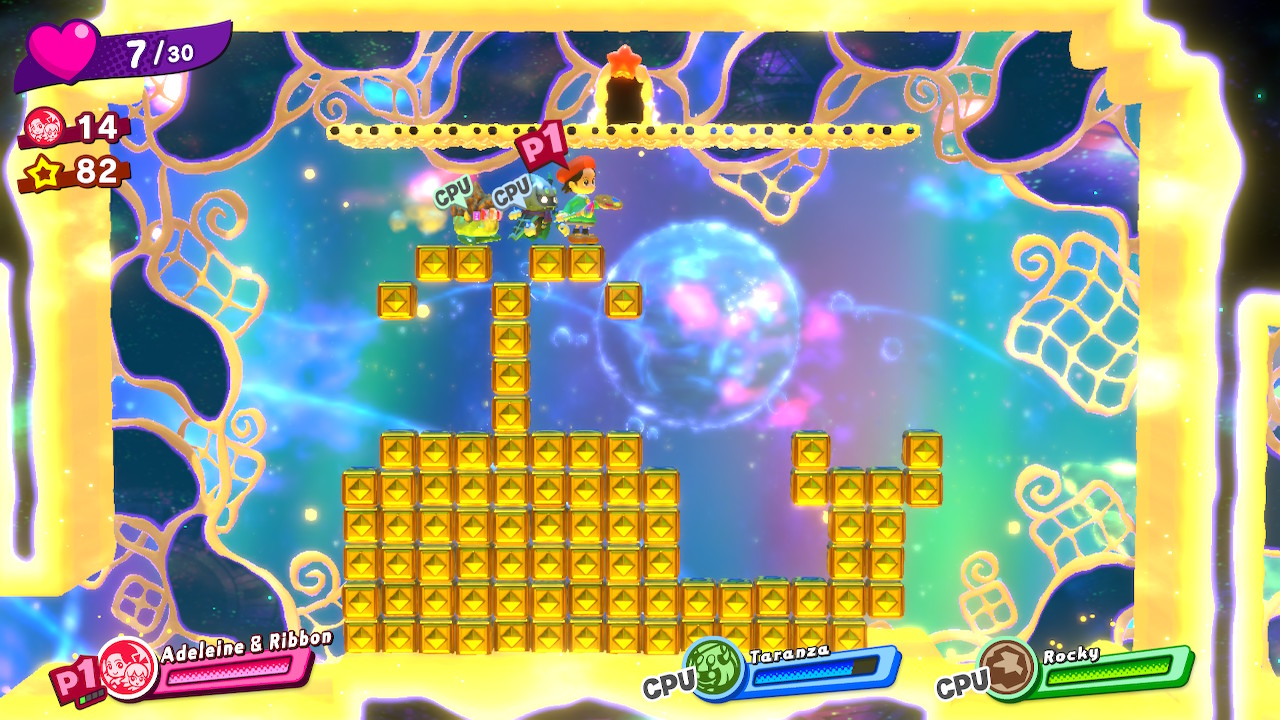 Some of the puzzles are so creative, it’s beautiful.

This mode changes when you use the Dream Friends. Upon completing Guest Star in the base game, you unlock the ability to use Bandana Waddle Dee, King Dedede, and Meta Knight in Guest Star. With each wave of free DLC, new Dream Friends, such as Marx, Adeliene & Ribbon, and Magalor, were added to the game with levels unique to their respective Guest Star runs. These levels were primarily based off of their debuting games with a Kirby Star Allies makeover. But, this wasn’t the only surprise.

Starting with Wave 1, the final boss arena for Guest Star was changed, looking more ruined than usual with the floor projecting a menacing pattern (based off of the Hyperzone in Kirby’s Dreamland 3). At first, this seemed like a fun aesthetic, but the ruin and decay was enhanced further with Wave 2, almost the entire room left dark and foreboding. I had my suspicions that they were leading to something, but I’ve been fooled before. After all, why would they add a new mode when it was implied that they were only going to be adding new Dream Friends? 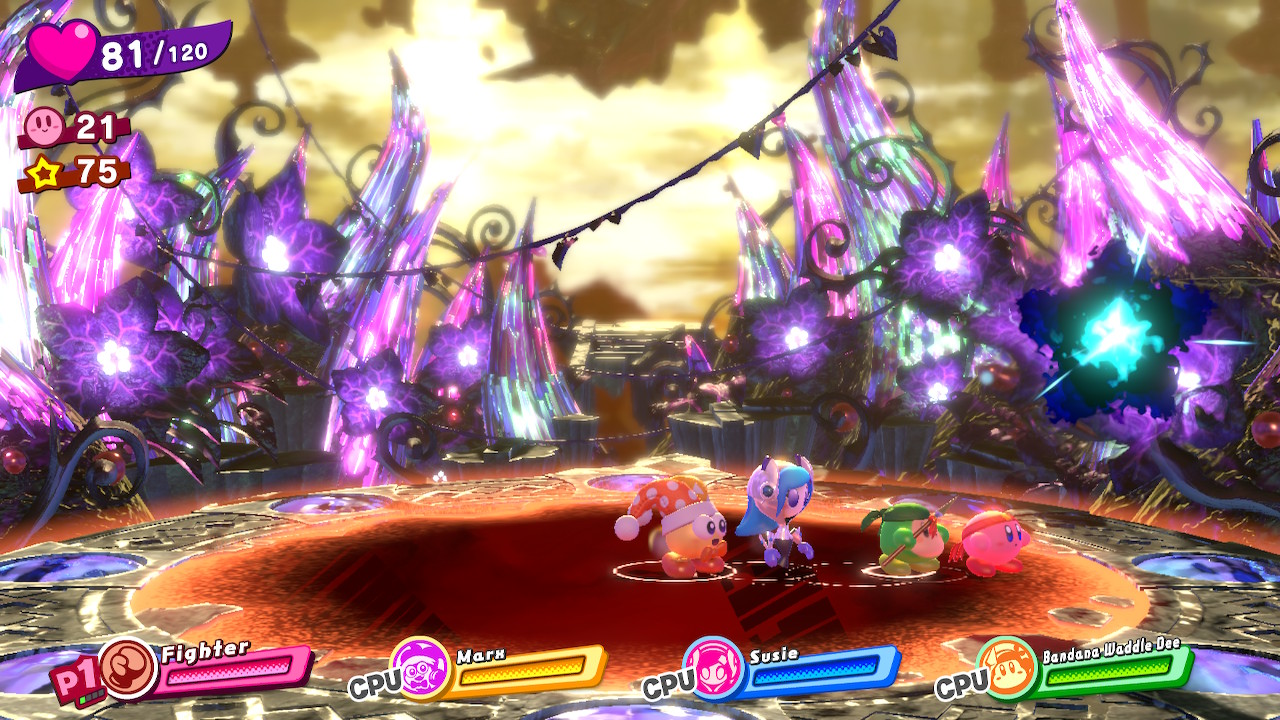 This is what the final boss room looked like, but as you can see, it’s a little different for some reason…

Then the Wave 3 DLC was announced. This time, the ruin on the final boss room reached its final form, and it was clear that it was all leading to something. We received our final Dream Friends, but we also received a new mode, Heroes in Another Dimension. Guest Star wasn’t the best way to highlight the abilities of the Dream Friends, and Heroes in Another Dimension proved that.

Taking place after the main game, Heroes in Another Dimension features portals to alternate dimensions summoned by Hyness at his peak corruption level. Each of the four dimensions has five sections, two at the beginning and end dedicated to an ability for Kirby to use, and three dedicated to the four “waves” of Dream Friends, starting with Wave 0: Bandana Waddle Dee, King Dedede, and Meta Knight. The goal of this mode is to run through each of the levels and collect as many of the forty hearts in each dimension as you can. In order to collect these hearts, you have to understand the Dream Friends’ abilities and often times think outside the box. 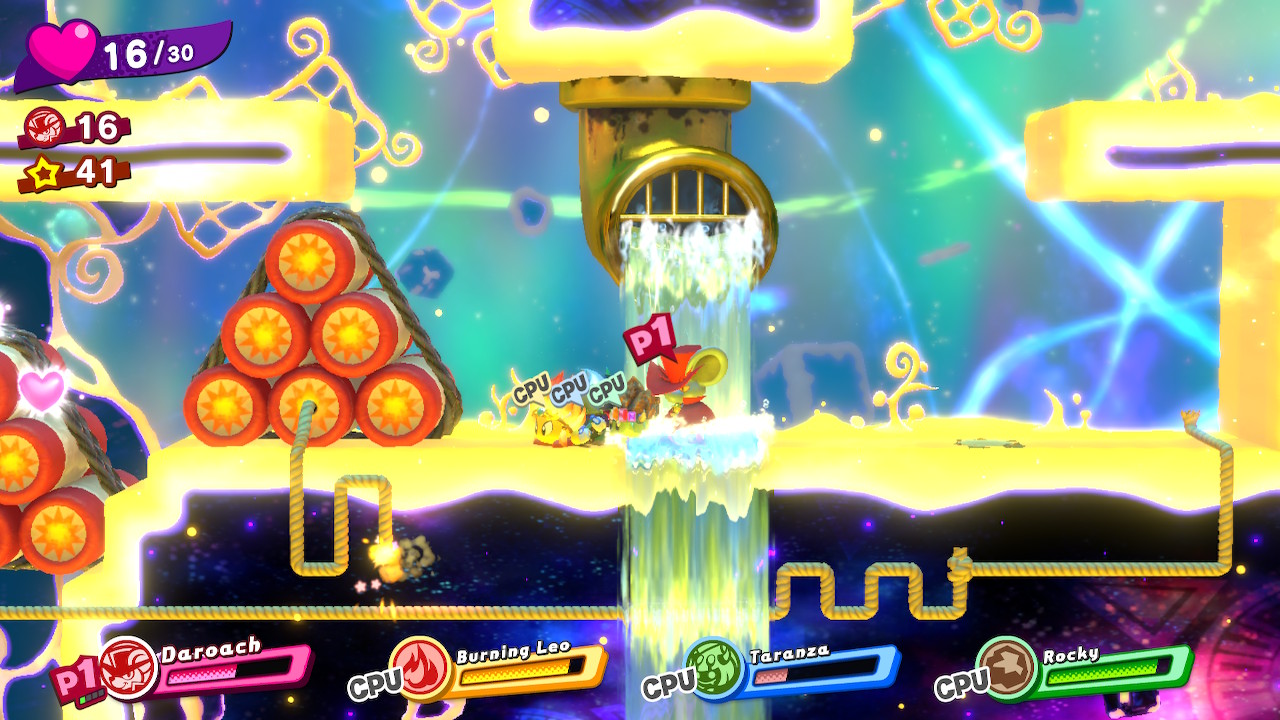 Screwing this up means losing a precious heart and I’d really like to get my first “A” since failing calculus in college.

For once, Star Allies stumped me with some of its puzzles. In one of the levels, I was playing as Rick, Kirby’s hamster Dream Friend, and could not figure out how to get the key to the door to the heart above me. All that stood between me and the door was a large cavern, and a psychic enemy shooting psychic bursts. But, one of Rick’s abilities is to bounce off of enemies heads a la Mario. This works for projectiles too, clearing the path to the heart. This was only one example of some of the difficult puzzles in this mode, and they were all focused on a single-player experience first. While it was only a few hours long, these dimensions had some of the best level-design moments I’ve seen in Kirby Star Allies.

At the end of each dimension is a new coat of paint on an old boss. The first one, which was shown in the trailer for Heroes in Another Dimension, is Parallel Whispy Woods. We already had a harder version of Whispy in the form of Ygg Woods, but he couldn’t scratch that “extra mode” itch like previous hard-versions of bosses. 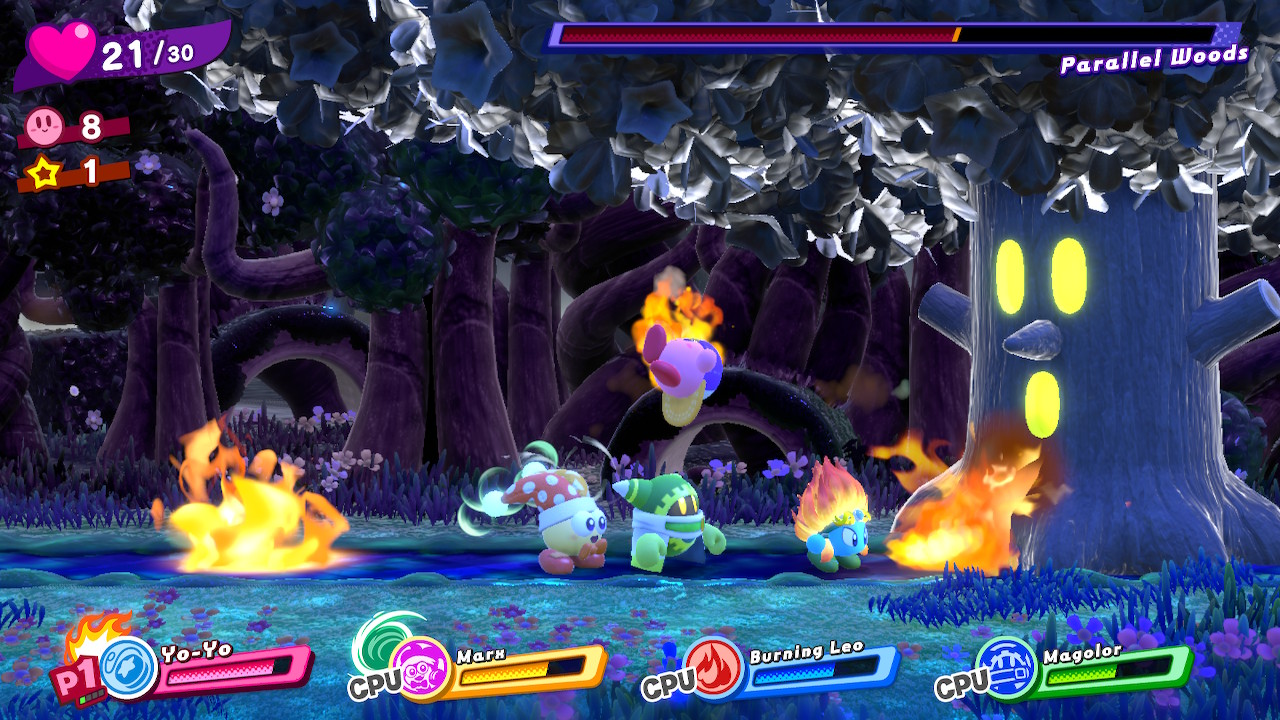 You guys like EX bosses? How about endurance battles? Every boss feels like a mix of both.

Parallel Whispy Woods, however, like the rest of the Parallel bosses, is no joke. His moves pack more of a punch, he has tougher variations of familiar moves, and he can take more of a beating than Rocky Balboa courageously taking on Apollo Creed for the first time. And, for the first time in years, I died against a form of Whispy Woods. Several times. All of these bosses took into account the absolutely insane amount of DPS your team puts out, and it makes the fight last longer as a result. Kirby Star Allies finally had real extra mode-esque bosses, and they’re no joke. 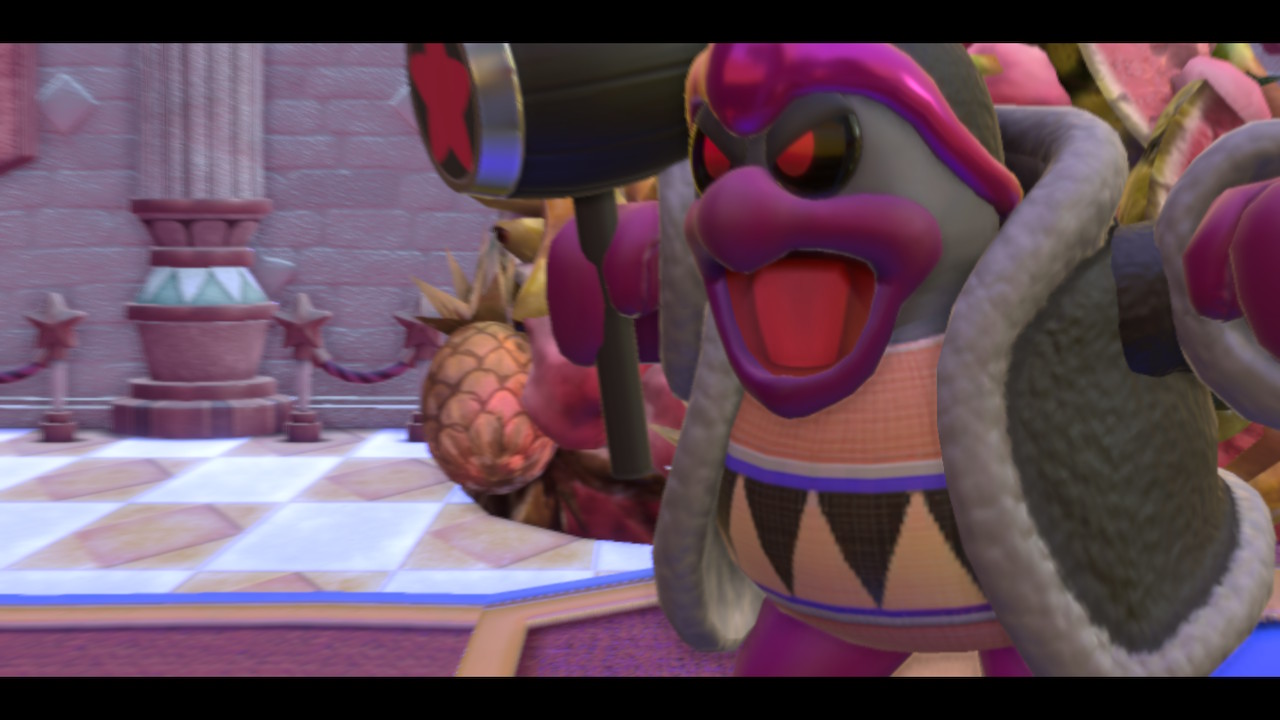 Forget monsters, King Dedede is the one that’s about to clobber that there Kirby.

And finally, considering Heroes in Another Dimension is a free update with a new mode that adds hours of gameplay onto the experience, it’s surprising that it wasn’t released as paid DLC. But even on top of the hours added by the new mode, the longevity of the game is increased in the game’s arena mode. Even upon completing the mode, a new level of difficulty is unlocked in the Ultimate Choice, and it’s the cherry on top to make Kirby Star Allies feel like it’s worth the full MSRP.

In this difficulty, appropriately called Soul Melter EX, your lifebar is full size (unlike vanilla Soul Melter), and you have better healing items at your disposal, but it’s still easily the hardest difficulty in the game. The final difficulty doesn’t rely on cheap tactics like giving you less health to create an artificial illusion of difficulty, it focuses on pure, fair fights with powerful, but dodgeable, punches. And of course, what “True Arena” would it be if it didn’t have a “True Final Boss?” Even at full health, you’ll wish you had extra lives for this encounter, but I won’t go into detail too much for anyone that wants to be pleasantly (or frustratingly) surprised. 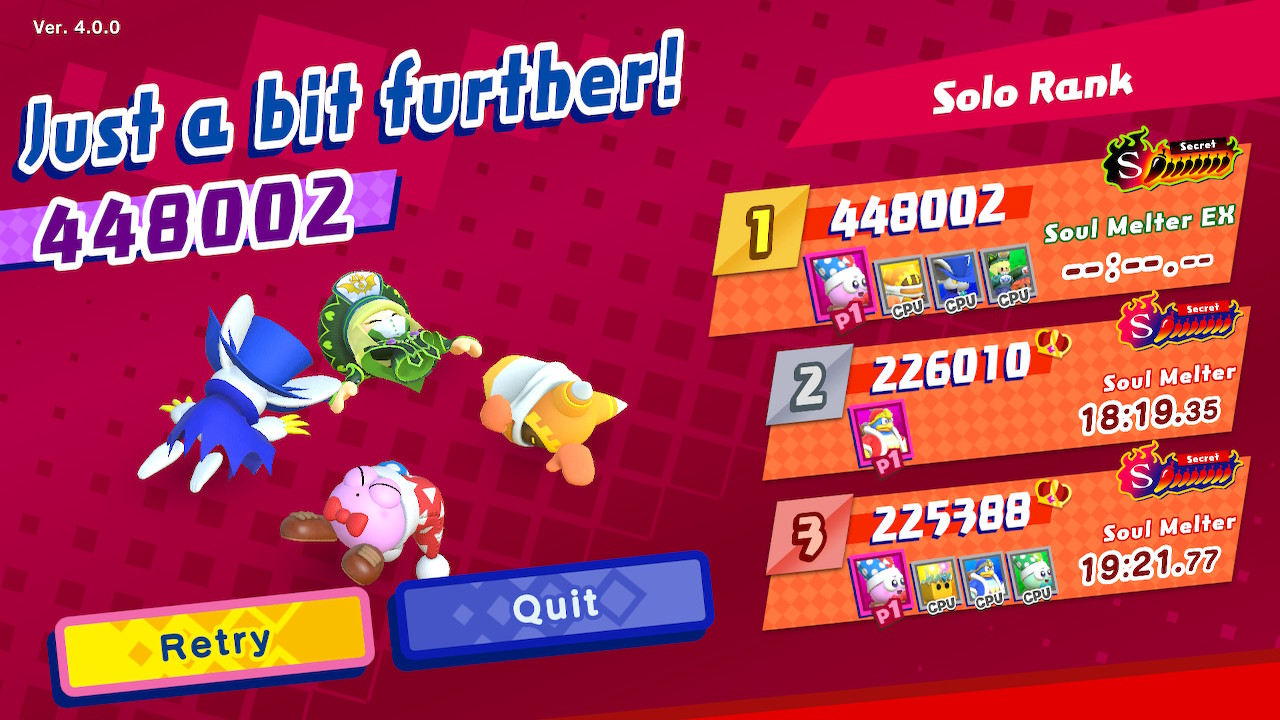 I saw this screen a lot more than I care to admit.

There’s even more goodies added in the final DLC that I can’t even begin to get into. There’s one more set of playable characters unlocked after Heroes in Another Dimension that have an even more unique Guest Star run, there are more puzzles to grind for pieces for, the Wave 0 Dream Friends each have a new move and a shared new final boss theme in Guest Star, and there’s even a reward for running through Soul Melter EX that feels worth the struggle.

It takes some time to get to the meat of the game, but it’s worth it once you get there. Any loose ends left behind at the base game will be satisfied with the conclusion of Heroes in Another Dimension. I’m a little sad to see that we most likely won’t be receiving anymore Dream Friends, but I’m happy with what we got, as they all bring a unique arsenal of moves to Star Allies. Looking back on the game and its free updates on its anniversary, Kirby Star Allies is finally a complete game, and it’s now one of my favorite Kirby experiences of all time. Since almost every other question was answered in the new ending, I just have one left: where could you possibly go from here?