Of all the niche trends that have grown into ubiquity in gaming in the last few years, roguelikes and pixel art may be some of the most divisive, immediately drawing some players in while signalling others to stay away. Black Future ’88 takes those elements and throws in a faux-’80s throwback cyberpunk aesthetic to check off one more box on its love it or hate it bingo card. Unless that’s already convinced you that Black Future ’88 isn’t the game for you, you’ll likely find it has plenty to keep you hooked despite a lot of built-in repetition.

Black Future ’88 doesn’t stray too far from the traditional roguelike formula. You jump into a game full of randomly generated levels, fight hordes of enemies with weapons you collect along the way, then die and do it all over. As you play through the game, you’ll unlock new characters, plus upgrades and items to be added to future runs, but otherwise, none of your progress carries over after you die. Black Future ’88 also features a fun, extremely hectic co-op mode and a daily challenge. 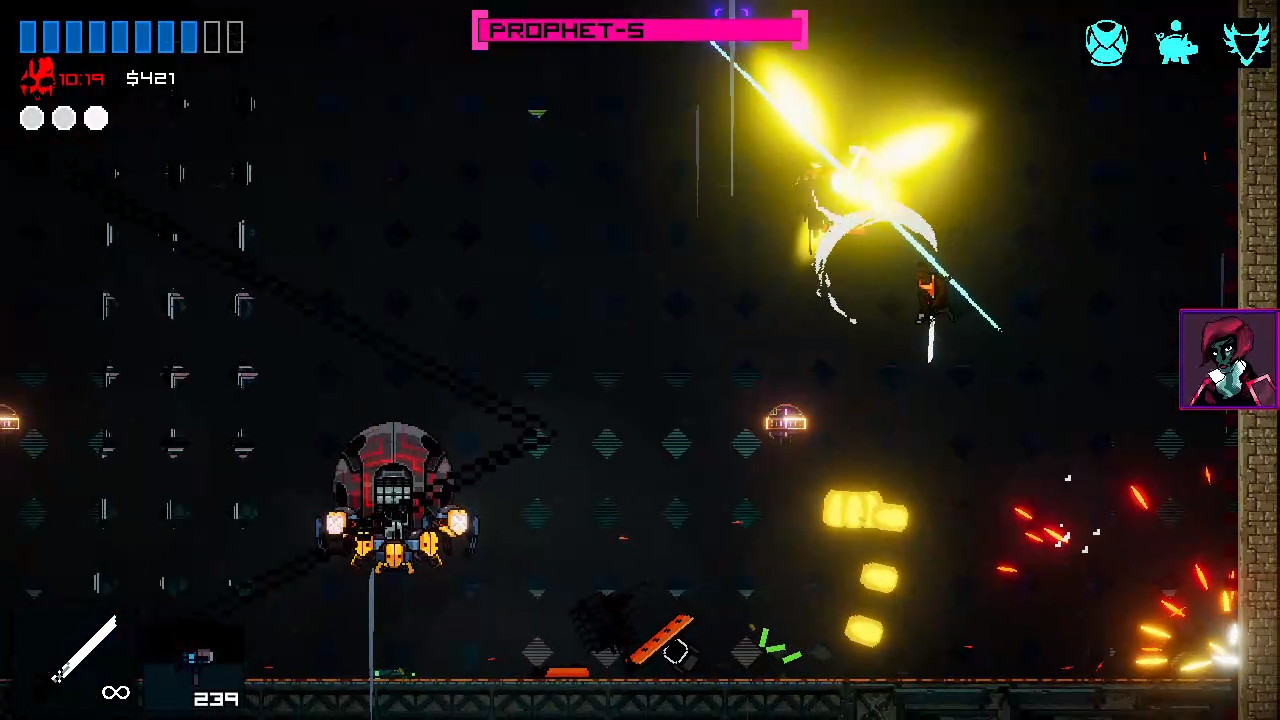 It also adds a couple of twists that are all its own. For one, Black Future ’88 has an interesting way of ramping up its challenge over time. Enemies you kill have a chance to drop weapons, money, ammo, or health packs, but you need to be quick about collecting them. Aside from weapons, anything that enemies drop only sticks around for a short time before Skymelt, the tower you’re exploring, scoops it all up, using it to make itself more powerful. That can mean anything from stronger enemies to clouds of toxic gas that count down your death timer faster when you stand in them.

That’s interesting enough on its own, but building on that, Black Future ’88, gives you only 18 minutes to live, at which point your heart explodes and you need to start all over. The time limit keeps you moving, forcing you to choose between thoroughly exploring each level for upgrades and rushing through with the limited time you have, even if you’ll usually end up dead well before those 18 minutes tick down. On its own, the timer doesn’t add a whole lot to the proceedings, except to keep you from dawdling, but Black Future ’88 builds on it in some interesting ways. Combined with the 18-minute timer, the necessity to snatch every item you can before the tower gets to them keeps Black Future ’88’s pace relentless. Some of the game’s most powerful weapons and abilities actually use your time as a resource, so you can fire an ultra-powerful laser beam or have instantly recharging evasive dashes, but using them will make your countdown clock run faster. Throughout the game’s levels, you can find upgrade stations that will sell you a permanent buff to your character at the cost of a few seconds off your timer, and some of these buffs themselves come at the cost of additional time. 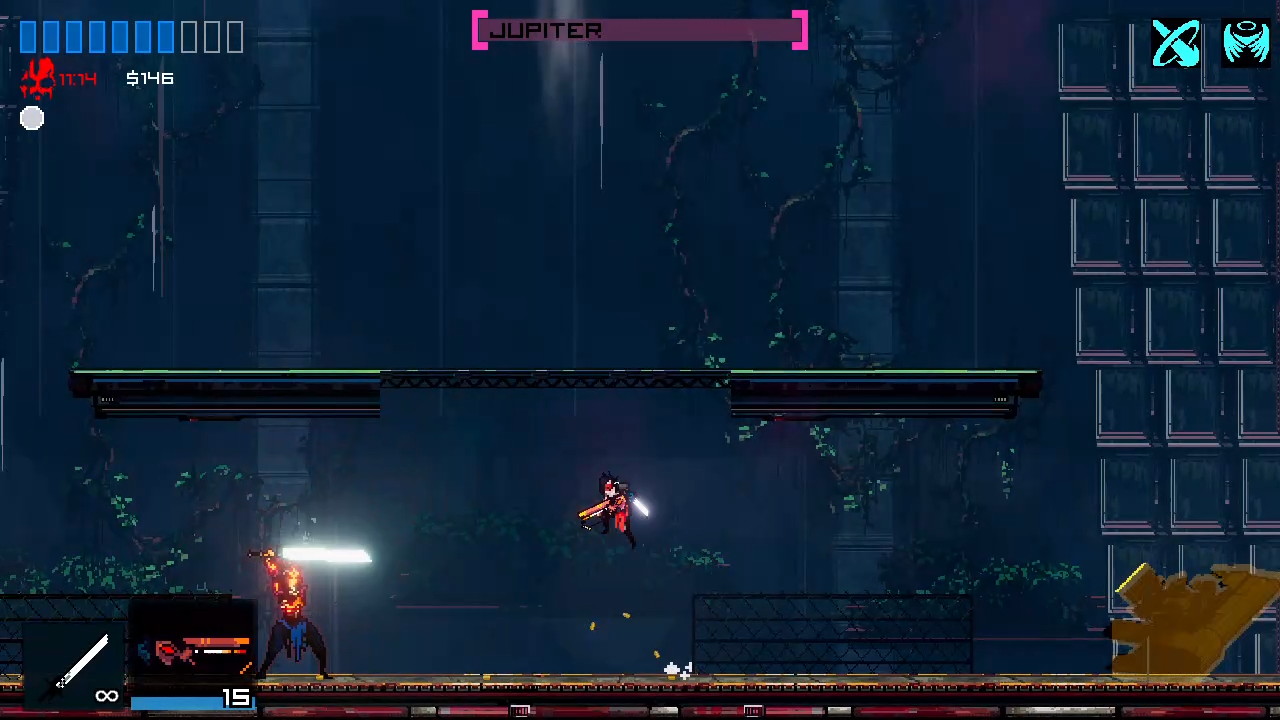 When it comes to weapons and power-ups, Black Future ’88 brings them in droves. You can find dozens of different variations, and you should have the full arsenal unlocked after playing for just a few hours. That in itself is kind of a bummer, since after that point, you’ll have seen most of the game’s surprises. What’s worse is how clearly some weapons are just better than others, and how many of them are throwaways. Once I had the full suite of weapons available to me, it became clear how unbalanced it was and how little all that variety really came to. Since ammo is universal, there’s never a need to drop a great weapon once you’ve got it, meaning all the additional weapon drops add up to nothing unless you happen to find something even better. The best runs I had were consistently ones where I found the perfect weapon right near the beginning and used it the whole way through. It’s great having that incredible weapon in your hands, but it does make the huge swath of options seem redundant.

Things are a little better with the game’s upgrades. Since you come across them less often and there’s always a price to pay for them, you have to be choosy about when you actually pick one up. Some are simple, like a reduction to explosion damage or an extra dash, while others are practically a necessity, like the ability to heal by dashing through bullets. Aside from those, there are precious few that can change your playstyle in a significant way, like a huge increase to melee damage at the cost of weapon firing speed.

Because so few of your upgrade options truly stand out and there’s an incentive to just rush through the levels, coming up with an interesting build is more difficult than perhaps it should be, but it is possible. When the stars align that way, Black Future ’88 feels like a whole different game. For whatever reason, most of the best combos I’ve found heavily lean on the dash ability, either by using weapons that use dash charges then finding ways to make sure I never run out, or making my dashes themselves turn into deadly attacks. There’s a surprising amount of synergy between seemingly boring weapons and abilities when you really dig into them, and more hidden options than it initially seems. After quite a few runs, I encountered a robot companion that I could awaken by giving it some of my health, and a good while later, I found a way to change its equipped weapon. With some experimentation, I was able to make a build where I used my weapons to fill levels with clouds of gas, then gave my robot pal a weapon that would ignite them, incinerating every enemy caught in the blast. In most runs, things don’t line up quite so nicely and you’re left to make do with subpar equipment, but when it does come together like that, it’s a thrill.

Fortunately, even on those trips through the tower that don’t give you the best weapons, Black Future ’88’s core gameplay is incredibly fun. Once you learn the ropes, you’re able to absolutely tear through levels, double-jumping, dashing, and even using some weapons’ immense kickback to propel yourself at lightning speed. The game’s decently sized roster of enemies all have their own distinct attack patterns, and you’ll eventually learn to tell as soon as you enter a room how things are likely to go down. The further you get into the tower, the more it starts to feel like a bullet hell game, and you’ll need to balance deflecting, avoiding, or destroying enemy projectiles with quickly eliminating your foes before you’re overwhelmed. While it’s fun enough at first, Black Future ’88 definitely gets better the more you play, as learning to predict the complex chain reactions between your loadout, your enemies, and the layout of the level lets you unleash some stunningly acrobatic machine massacres straight out of The Matrix. 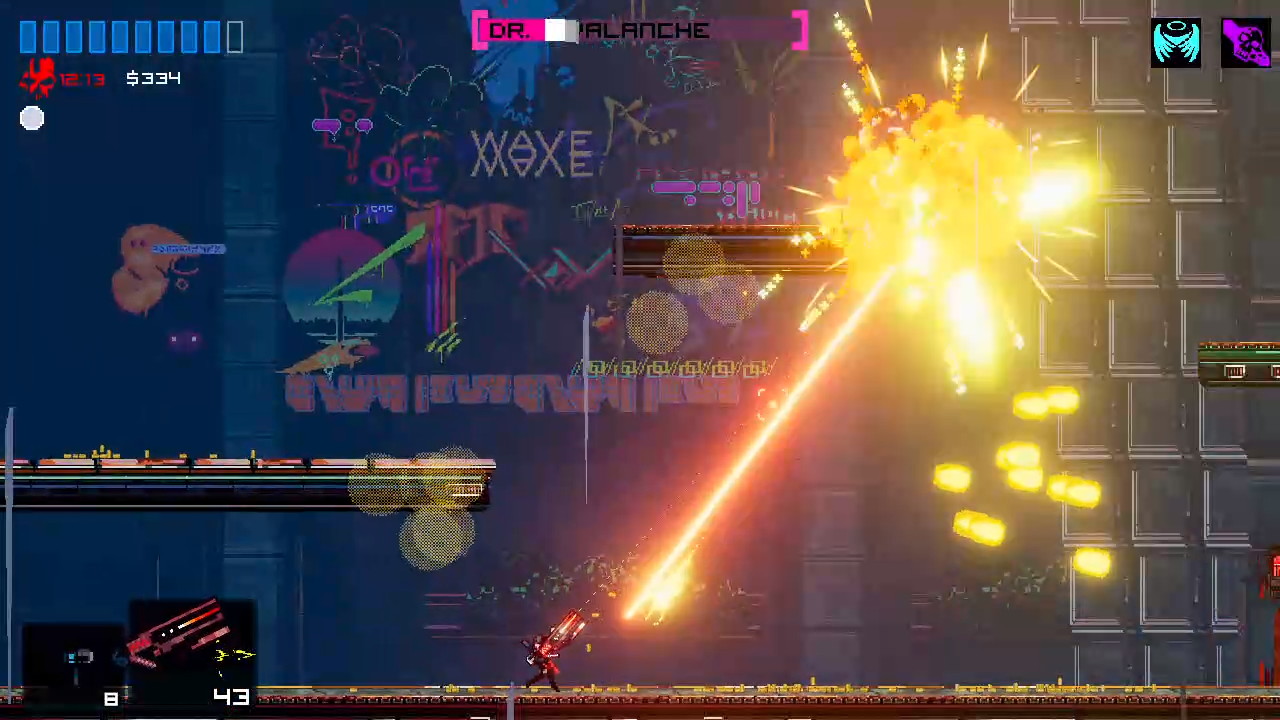 If all of that is a bit overwhelming, Black Future ’88 also features an assist mode option, which tones down the difficulty a bit and gives you the ability to slow time — something that’s only available to certain characters by default. It’s a nice touch that gives you a less stressful way to learn the mechanics or introduce a new player to the game, but still leaves it difficult enough to feel satisfying.

Black Future ’88 dresses up compelling gameplay in a neon-soaked, high-collared cyberpunk vibe (or Synth-Punk, as its developers call it), both in its graphics and its music. The flashy visual effects can make things a bit hard to follow at first, but once you get used to them, they pack a surprising amount of helpful cues into what might initially look like just a laser light show. While it might not be everyone’s cup of tea, I love the look of the game. The same goes for its killer soundtrack, which, in a nice touch, lets you choose which soaring synth tune to play at any given time.

Despite feeling great moment to moment, Black Future ’88 suffers from an uninspired structure. The tower you’re climbing is divided into named zones that each culminate in a boss fight, but there’s functionally no difference between the zones aside from higher level enemies only showing up later in the game. If you make it to the top before your timer runs out, you essentially restart a harder version of the climb. There are secrets along the way that shake up the structure, but with nothing to carry over from run to run and an anticlimactic loop within each session, it can feel particularly unrewarding to invest a lot of time into Black Future ’88. That’s somewhat of a problem in any roguelike, but games like Dead Cells and even as far back as Rogue Legacy have found more creative ways to make the genre’s inherent repetition feel more satisfying. Black Future ’88 is fun while it lasts, but doesn’t entirely stick the landing.

Black Future '88 is a fast-paced, thrilling roguelike, but it offers little to shake up the genre’s inherent repetition. Its often underwhelming gear and lack of variety in levels makes for dull runs too often, even though its gunplay consistently satisfies. You’ll find lots of hidden depth in its upgrade system if you stick with Black Future '88 despite its uninspired structure, which is made easier by its great art style and stellar soundtrack.

A committed indoor kid, Bryan moved from Pittsburgh to Los Angeles for a prettier landscape to ignore. They can be lured outside with promises of taco trucks and film festivals, and enjoy trawling through used book stores for works on the occult. Bryan has been gaming since the SNES era and is a sucker for good pixel art.
Related Articles: Black Future '88, Indies
Share
Tweet
Share
Submit