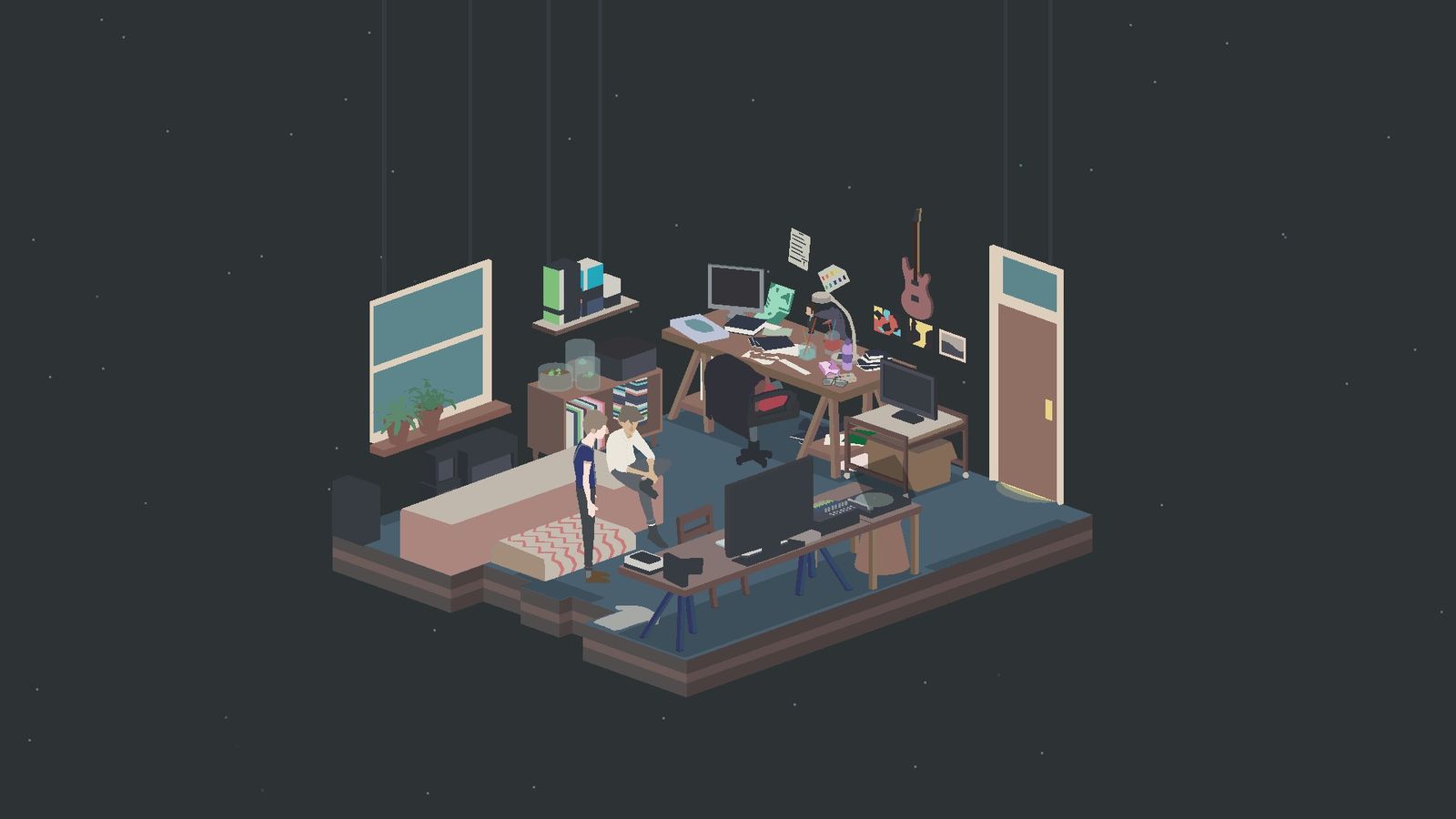 No Longer Home is an elegant, eloquent point-and-click narrative game, one that spins an intimate story that, paired with its ethereal presentation, commands your attention. It casts a spotlight on two non-binary soon-to-be university graduates struggling to find their footing in a world they’re ill-prepared to face. Being a recent graduate, I couldn’t help but fancy myself a member of the ideal audience—like the game was speaking to me, personally. But just as I’m grappling with my new reality, so too are countless others. There’s a little brain food for everyone; I can’t imagine anyone not finding something they resonate with in the plight of the protagonists. If anything, I’m more surprised by how easily I was able to find comfort in No Longer Home; its honesty and vulnerability convinced me to put my guard down. It’s a deeply personal two-hour meditation on achieving self-actualization in a world working against you, inviting players to find their own meaning in it through the lens of their experiences.

Bo is a native Londoner, Ao is a Japanese international student. Both were hoping to snag the jobs promised to them as graduates, and both were rudely reminded of the systems working against them. No Longer Home follows the pair as their cozy university life together comes to a close. You alternate between controlling Bo and Ao in a highlight reel of memorable moments leading up to their inevitable departure. A bulk of your time is dedicated to exploring their home and interacting with mementos of their school life. Like them, the flat itself is in a transition period, communicated through the level design and a light sprinkle of magical realism. Pieces of each room float gently into place when you enter, or rearrange themselves as the story progresses. Sparse drums sit below spacey Rhodes chords or lax string melodies that lay on the melancholy thick. The ambient sounds of the city bleed into the mix as well, accompanied by little details in the sound design like piano hammer hits and guitar squeaks. The audio is half the fun. In one of my favorite scenes, for example, all the sounds are themed after a guitar. 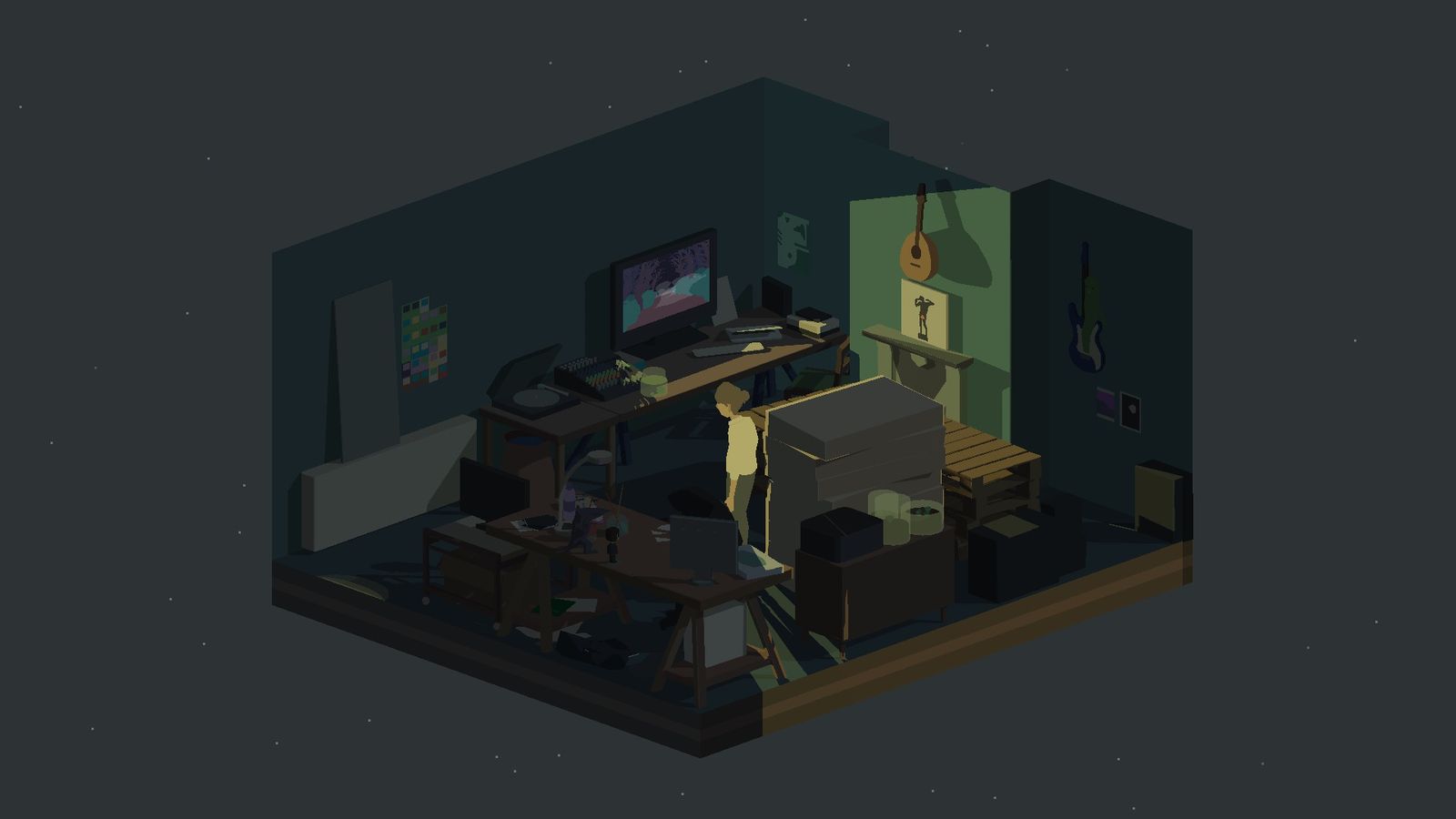 Always more to pack up.

The rest of that time is spent in conversation with friends or one another. The dialogue options are an integral mode of interaction for you, but the trick here is that the player’s choices determine not just what’s said, but who says it. You’re not really speaking as any of the characters, more like choosing whose voice is heard. For such an intimate, character-oriented game, keeping a little distance between the player and the protagonists is an interesting choice, but one that I think pays off. Bo and Ao take turns as focal characters, but you’re never meant to become them, to step into their shoes. You’re already connected by this collective angst, so, in a way, you’re joining in on the conversation. The choices you make won’t influence the direction of the story, but they help you process the questions and themes of the game.

None of this would be possible if not for No Longer Home’s precise and poignant writing. The narrative tackles capitalism and societal expectations while exploring how these circumstances impact the characters of Bo and Ao. The dialogue is always interesting and engaging, gracefully avoiding the trap of spewing talking points without narrative context. Each character feels real, with real internal conflicts and motivations, and you get a strong sense that they truly mean what they say. The odd, detached one-liner does slip through the cracks every now and again to mess with the mood. A few times the script feels a need to continue painting a picture when most players’ experiences can already fill in those blanks. Instead, more time could’ve been afforded to Bo and Ao’s character arcs, which have quite a few gaps in them. 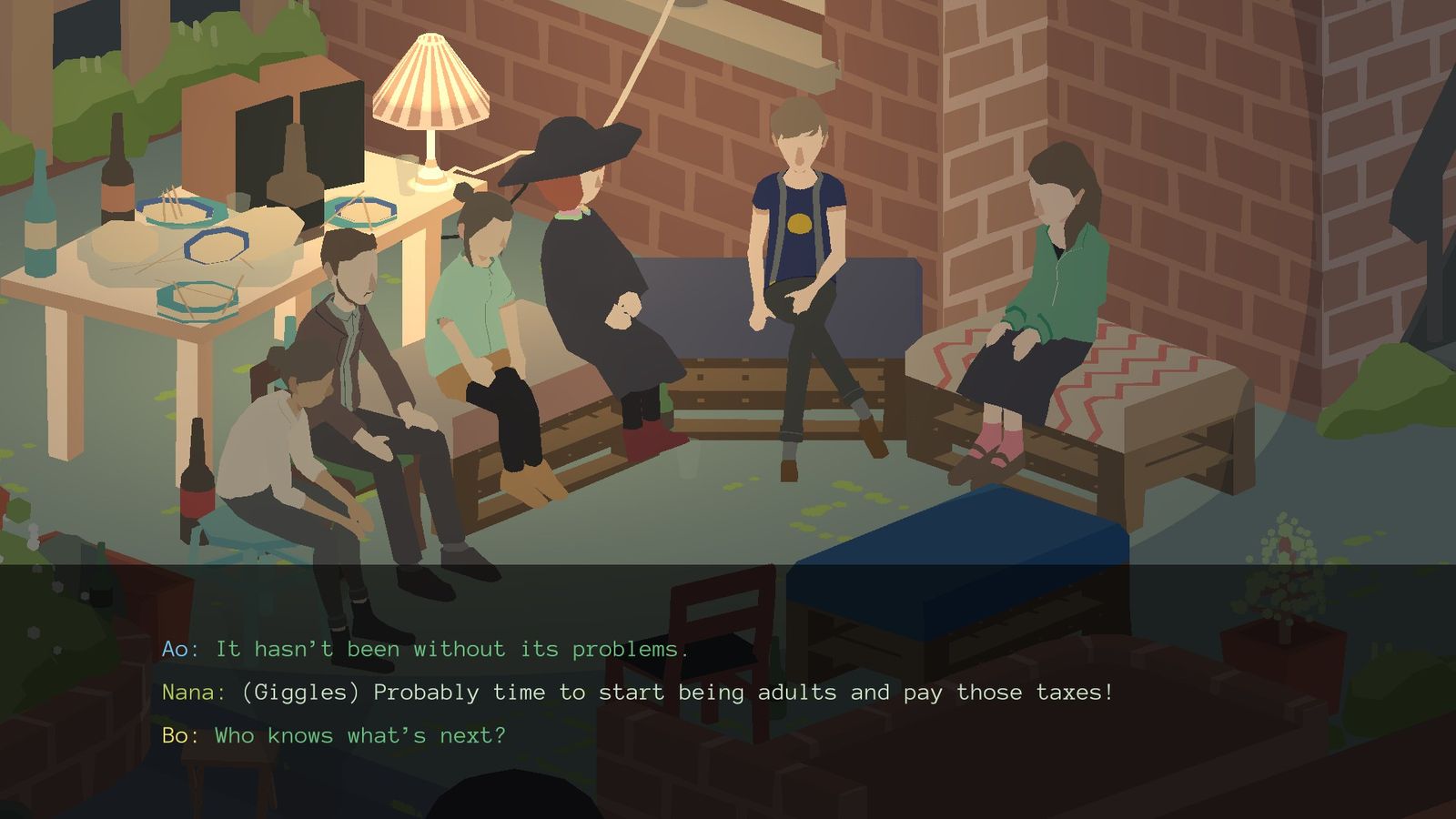 Me and the homies vs. adulting.

The occasional hiccup aside, No Longer Home stays steady, slow, and thoughtful; it takes its time with its transitions and isn’t afraid to keep a scene going a little longer than it has to. Despite that, I always thought my time was being respected—it never feels too slow. I appreciated every opportunity it gave me to meditate on its key story beats. You’re encouraged to match the game’s pacing, and it pulls out all the stops to preserve its casual, cozy flow. The arrangement of rooms, the placement of doors, to smaller touches—everything serves an easy-going experience. If anything, there’s a lack of intrigue that you’d expect when dealing with magical realism. It’s hard not to let your imagination go wild when you walk in on a stellated geometric mass casually floating over a bed. Every element of No Longer Home plays its part, for sure, but what’s a little bit more stage time for some of the game’s more interesting ideas?

Ultimately, the game escapes from under the shadow of what’s obviously its greatest influence, Kentucky Route Zero, which it pays homage to with direct references, plus thematic and style choices. Though No Longer Home doesn’t play into the magical realism quite as hard, I felt it was a more palatable experience. It’s shorter, cleaner, and easily more relatable. Like its influences, the game doesn’t really have a “point,” nor does it tie up all of its loose ends; it’s food for thought. It’s a story that expects you to be honest and leaves it up to you to interpret it however you choose. While I would’ve liked to spend more time with the characters and tour their world a little longer, this is an experience that will stay with me long after this review.

A deeply personal two-hour meditation on saying goodbye that invites you to channel your lived experiences and walk alongside its characters. It’s a little sparse on the details, but No Longer Home still gives players plenty to chew on.

A self-deprecating, overly sarcastic pair of glasses that occasionally possesses a human host in order to partake in the delightful process of playing video games, then immediately complaining about them. When he is not playing games (a rare occurrence), he can be found either writing about things that no one cares about, or haunting the quiet streets of his Canadian suburb.
Related Articles: Indies, No Longer Home
Share
Tweet
Share
Submit