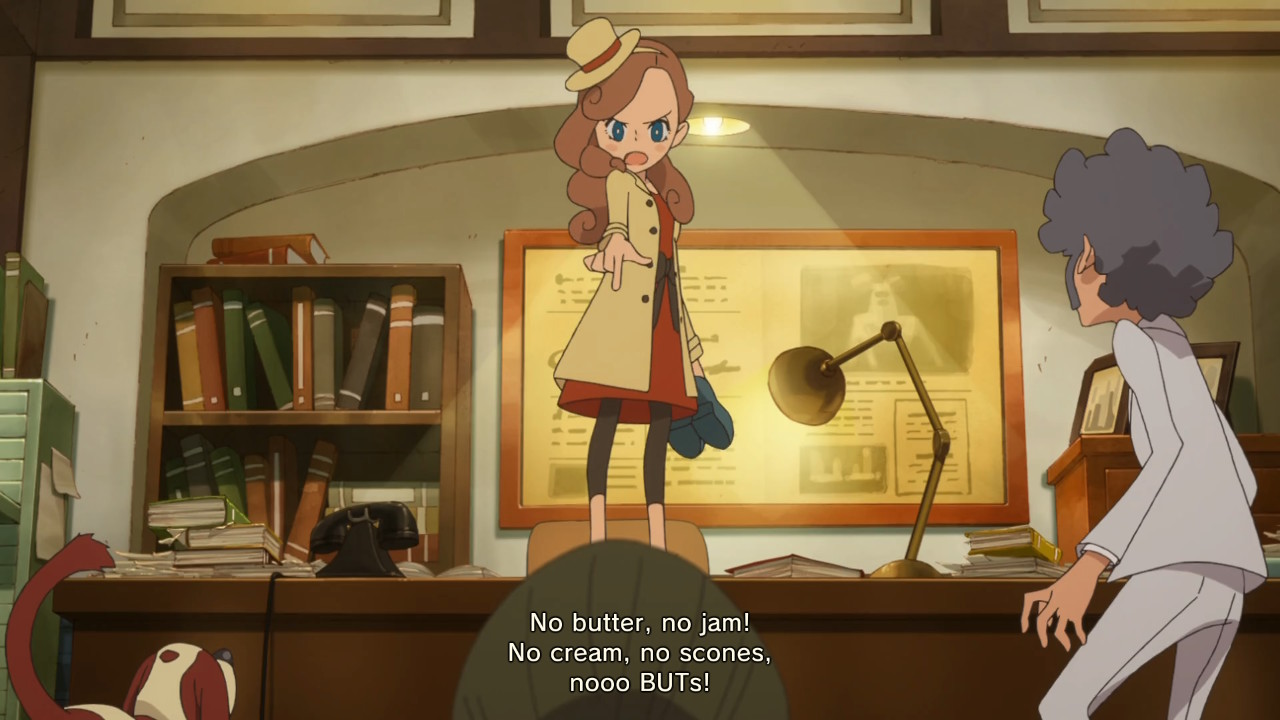 The Layton series has always been a kind of self inflicted torture. Each one contains hundreds of devious puzzles as well as a central mystery to solve. You may want to quickly progress through the plot because you’re so engrossed, but you just found a puzzle behind a lamp post and you can’t just not solve it. In this latest Layton title, LAYTON’S MYSTERY JOURNEY: Katrielle and the Millionaires’ Conspiracy – Deluxe Edition, Katrielle makes that foundation for delightful agony her motto: Any mystery or puzzle, solved. As her father mysteriously vanished many years ago (he’s a really terrible dad, abandoning both of his children), it’s up to Kat to solve all of the mysteries plaguing London.

Shortly after setting up her detective agency, a talking dog gives Kat her first case: finding out who he is, and why he can talk. However, this mystery is quickly shoved aside and never spoken of again in favor of an episodic structure loosely tied together by the game’s titular millionaires. You’ll unravel each case by exploring London, speaking to persons of interest, and solving puzzles. While this new structure does feel like a good fit for the series, I do have a few major problems with it in this iteration. First, each mystery is far too easy to figure out. I had every one figured out by the time I had one or two clues; save for the last case, but that one doesn’t even give you the opportunity to deduce the mystery on your own. The solutions are all very disappointing as well; of the game’s twelve cases, at least three posit that a crime has been committed where in actuality only one of them has any semblance of criminal activity. This causes each case to feel extremely dull, there’s never any stakes. I also take issue with the way the game throws puzzles at you. The most frequent method is you need some information from a character and they’ve agreed to tell you, but first they want you to solve a puzzle that’s been bugging them all day. I understand that it can be a bit difficult to think of reasons to solve abstract puzzles, but at this point in the series it feels like they’re not even trying. Thankfully, each case is relatively short and can usually be finished in under an hour, if you don’t dally poking around each location looking for coins and puzzles at least. 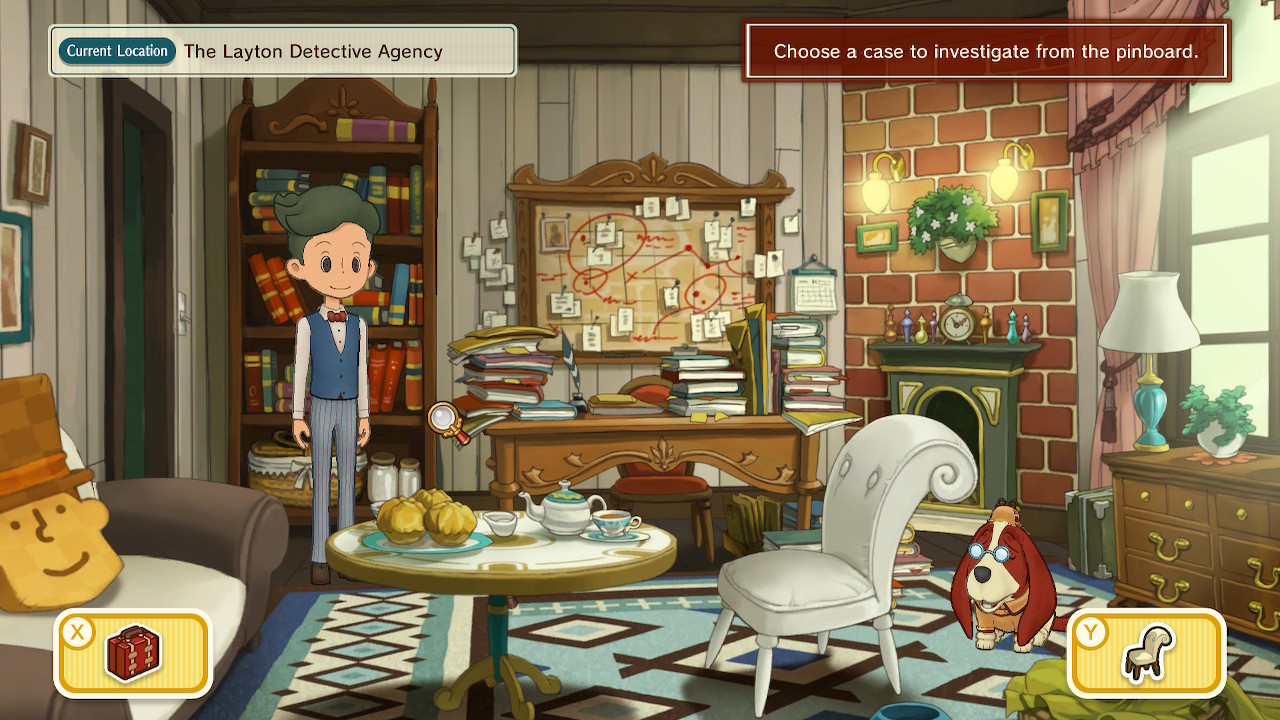 Visually, the game is absolutely beautiful. As a port of a 3DS game, I didn’t expect it to look as good as it does. Each background feels meticulously hand drawn and modeled, and the two art mediums are seamlessly blended together. It’s a bit hard to put into words, especially when you’re not looking at the game in motion, but take a look at some of the screenshots and hopefully you’ll see what I mean. The character models also strike a nice balance between the series’ original 2D portraits and the more recent 3D models. The textures on each character have a nice paper quality to them as well as thick outlines, so I don’t miss the old style as much after this jump to HD. If you do though, there are plenty of fully animated cutscenes to hopefully scratch that itch, and each case has at least one or two. While they do look great, I did notice a slight drop in audio quality during these animations when compared to the voice acting in regular gameplay. It’s not a huge deal, but it did bother me throughout the experience.

When I played the original game, Curious Village, as a kid I remember being stumped quite a few times by some very difficult puzzles, especially near the end when it asks you to solve a certain number of puzzles to progress. For better or worse, I never encountered such roadblocks in Millionaires’ Conspiracy. The puzzles in the first half are stupid easy, and while a few near the end tripped me up a bit, I never had to spend too long on any one puzzle. You won’t find any of the series’s signature brain busters in the main story, so you’ll have to seek them throughout London by poking every object you come across or delving into the daily puzzles section of the menu or one of the three minigames you’ll come across as you progress. I’ve never really enjoyed the minigames in the Layton games, except for the Hamster one, but I did give each of them a try and while two of them seem perfectly fine, the third is essentially a guessing game where you may not even have the solutions you need when you acquire each puzzle. The game may have been better off without that particular one, but the minigames aren’t the main attraction anyway. The puzzles are, and there are quite a lot of them, I had only discovered about 150 of the over 550 by the time I reached the credits. Of those 150, quite a lot of them were trick questions and while they were enjoyable and fit the tone of the game, I had started to expect them and was more surprised when a puzzle wasn’t a trick than when one was. I think the solution to this particular conundrum may lie in the pacing of said puzzles, when the last five puzzles you encounter are trick questions, it’s hard not to think the next one will be as well. While fun to solve, their prevalence made them a bit too easy and I wish they were more spread out. 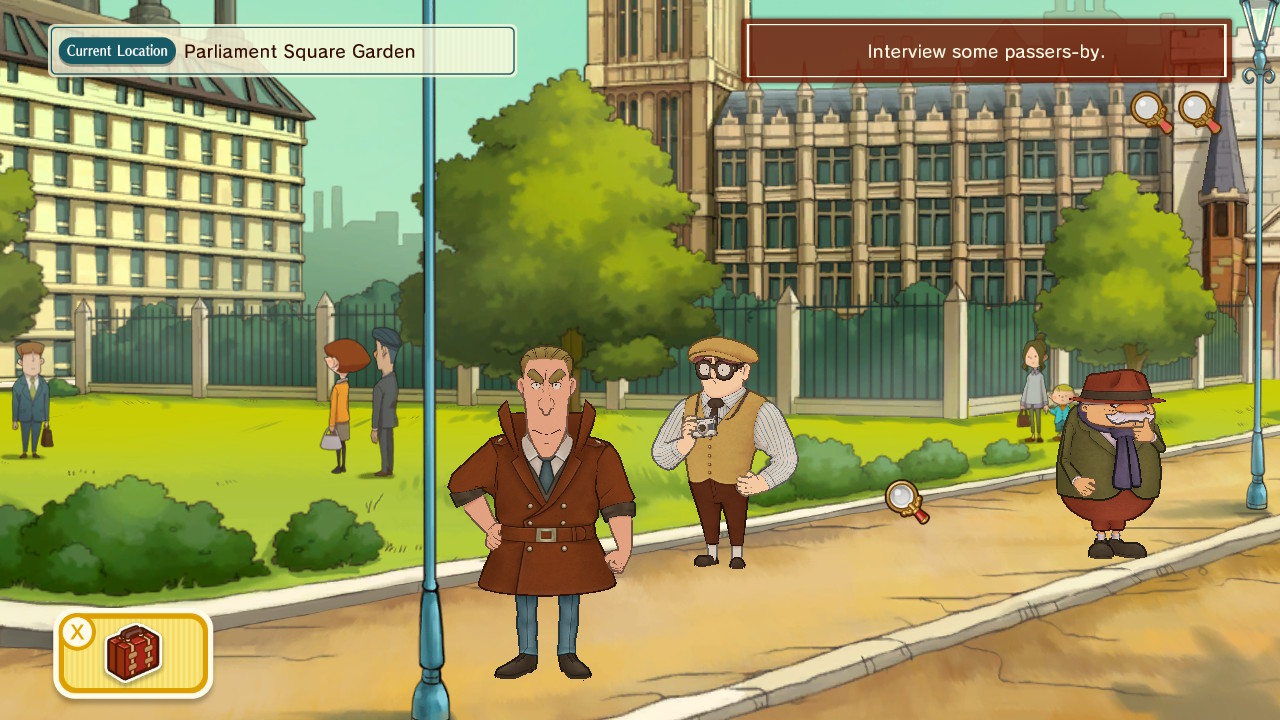 While the overall plot may go nowhere and the subplot of each case ends up dull, the characters are charming enough to keep you playing. Katrielle herself pretty much carries the game on her own. It’s fun to watch her appear to stumble through each mystery, then at the end dramatically present the solution. Her rivalry with a scotland yard profiler is also interesting, though it doesn’t come up as often as I would like. Kat’s cohorts, Sherl and Ernest, unfortunately put a damper on her antics. Sherl, the talking dog, complains and spouts aggravating dog puns constantly throughout the adventure and Ernes, Kat’s assistant, comes off a bit creepy in his endeavors. It’s heavily implied that he’s in love with the heroine, and his forcibly becoming her assistant feels like he’s stalking her, since she never asked for an assistant and doesn’t pay him. This may just be my interpretation of events however, as she seems fine with his company.

Katrielle and the Millionaires’ Conspiracy may not have an interesting plot, but the game’s likeable characters, a plethora of puzzles, and beautiful artwork are enough to see it through to the end. While it is a bit too easy for my taste, it’s still a fun enough journey.

David is the kind of person to wear his heart on his sleeve. He can find positives in anything, like this is a person who loved Star Fox Zero to death. You’ll see him playing all kinds of games: AAAs, Indies, game jam games, games of all genres, and writing about them! Here. On this website. When not writing or playing games, you can find David making music, games, or enjoying a good book. David’s favorite games include NieR: Automata, Mother 3, and Gravity Rush.
Related Articles: Layton’s Mystery Journey: Katrielle and the Millionaires’ Conspiracy - Deluxe Edition
Share
Tweet
Share
Submit