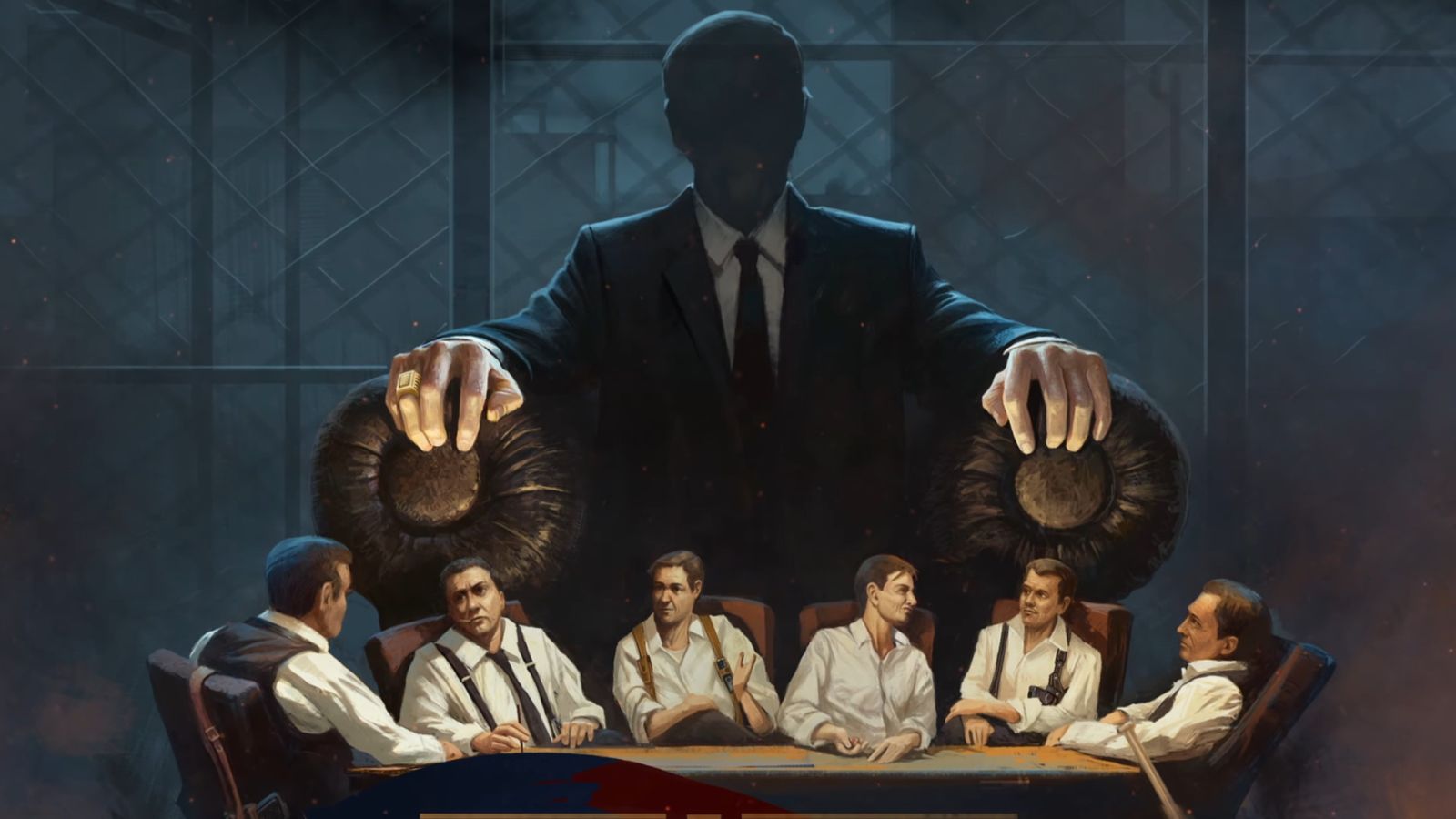 If you are like me, you dog-eared plenty of Choose Your Own Adventure books as a kid, not sure which way to take your quest for the best outcome. There have been a few games recently that have taken this concept and ran with it such as This is the Police and Suzerain. Now, we get a chance to take our grift to the highest office in the land — as President of the United States. Follow me and see if you’ve heard this one…

So the story in this game goes, a super-corrupt rich businessman with shady deals with even shadier characters manages to somehow shove a prybar into the political system, ascending to the office of President. This scumbag uses political wheeling and dealing, coercion, threats, and even murder to retain his power, all the while working to pass the 26th Amendment which would allow him to avoid prosecution for his innumerable crimes and misdemeanors. I guess what I’m saying is that it’s almost impossible to see any direct parallels or inspiration in modem politics, and that developer SuperPAC drew this out of thin air. Unfortunately, you are that scumbag, and you will absolutely go to jail at the end of four years, if you don’t pass that amendment. Time to fleece the people and grease the political skids! 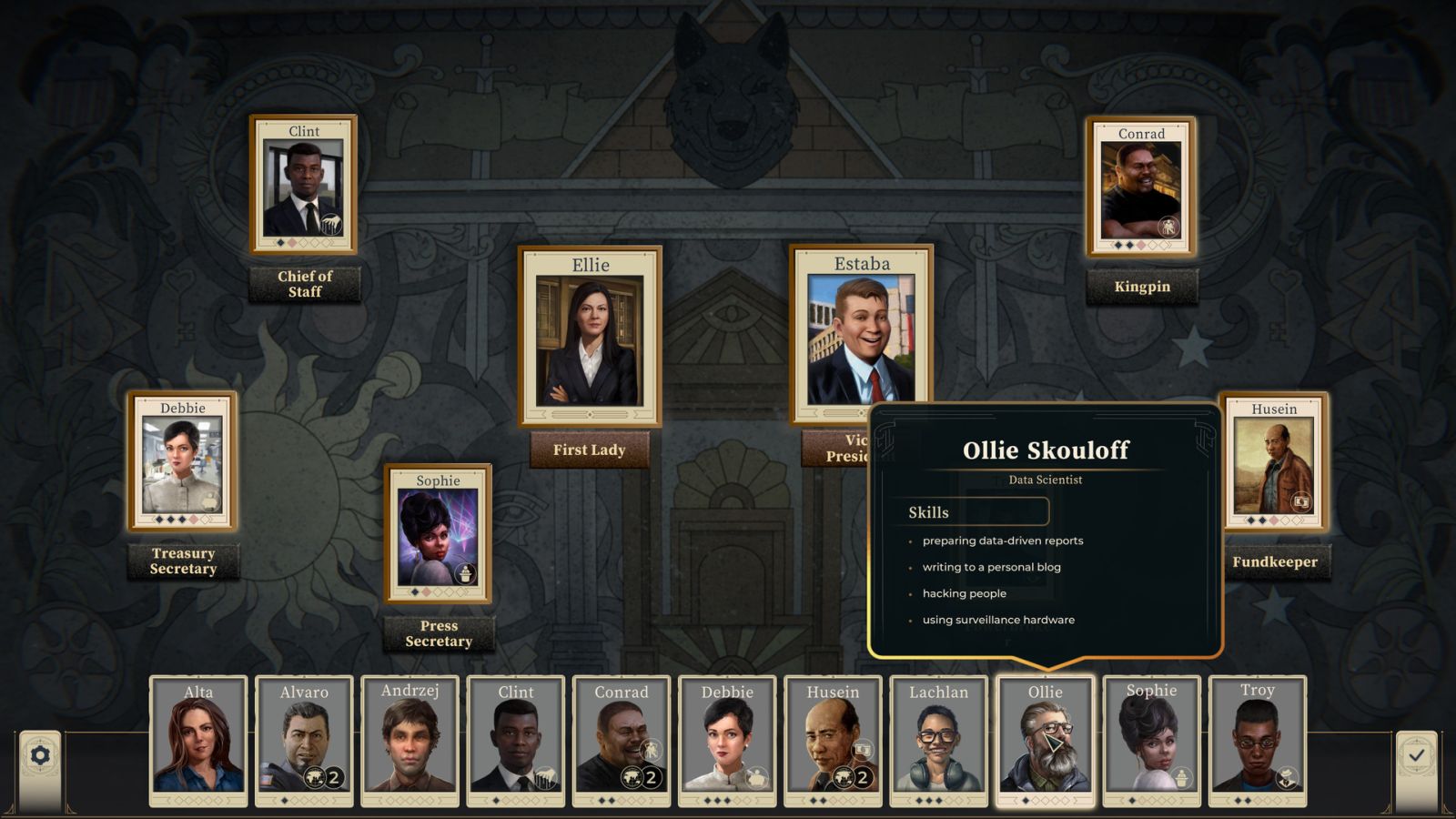 This is the President starts directly after you are elected, but before taking the oath of office. Literally everything that happens after this point is up to you. Presented as a series of decisions, often with no clear positive outcome, you’ll have to navigate the political landscape. It turns out taking the Presidency was fairly easy, but holding onto it long enough to secure your long term freedom is another thing entirely. Let’s check out the first 40 minutes of the game.

This is the President -- First 40 minutes on PC [Gaming Trend]

This is the President has a slow-burn tutorial for the player to get used to the various gameplay mechanics. Starting out it’ll be you and the future First Lady dishing out decisions, but soon enough you’ll need to make some promises. The American public can have the attention span of a goldfish when it comes to politics, so you are presented with an opportunity to be incredibly vague, very specific, or just spend your podium time hammering on the failures of the previous administration. Either way, this choice, and everyone after this depends on your ability to execute. Words are wind, so it’s time to get some specialists who know how to get things done on your team.

Your staff starts off with a select few individuals, but rapidly grows as you move through your term. Each of them has four or five skills that make them invaluable to your administration. Most of them will work for you directly, but occasionally you’ll even employ more seedy characters under the table for more delicate (or messy) work. You’ll need to name a Press Secretary, a Chief of Staff, and a Treasury Secretary, but you’ll also be filling other positions for your Shadow cabinet like Kingpin and more. You may be stuck with that idiot Estaba as your Vice President, but you can shuffle everyone else as you see fit. Some are well suited and add bonuses, while others will reset the job and just add stress to everyone around them — choose wisely. While we are at it, let’s talk more about stress. 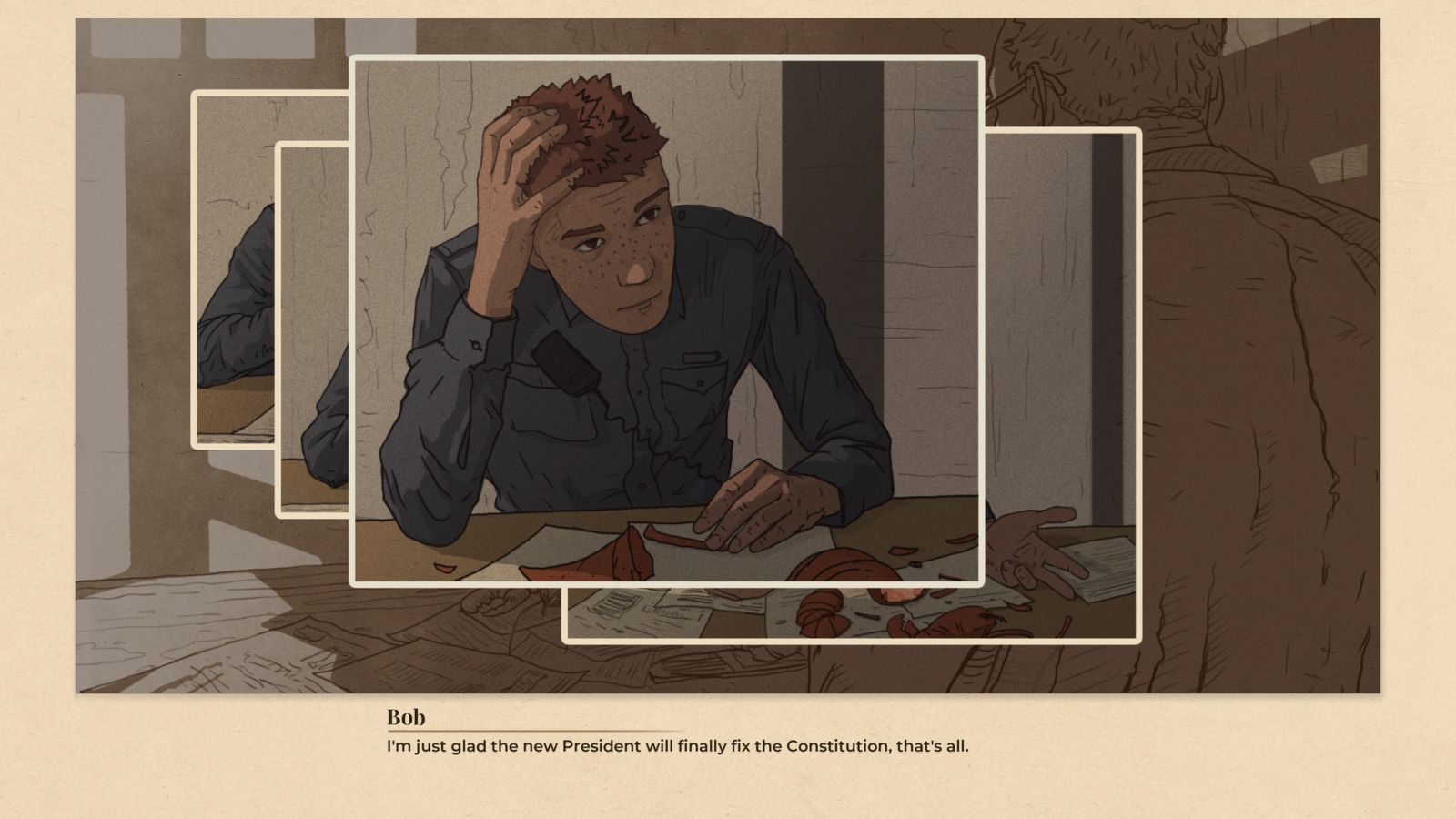 Your team members have five pips under their name that signifies their stress level. These people are fully behind you, and you can ask them to do almost anything, but everyone has a breaking point. When you set out to solve a problem on your plate you’ll be presented with the background information about it, often limited, and you’ll have to decide who you want to send to try to fix it. One, two, or three people can be assigned, each bringing their own skills and traits. As an example, if you are dealing with a refugee crisis you could send out your lawyer who might be able to help with legalities on the ground, or you could send your security person if you need a little bit of investigative work, or if you need somebody shaken down. Your Data Scientist might be able to deploy a drone to observe things from afar, or he might hack radios or computers. You’ll once again be presented with choices with how to respond. When a person is well suited to the job, their stress impact will be minimal. If you ask them to step way out of their comfort zone, it might cost a lot more. Go past 5 stress pips however, especially habitually, and they might quit, or do something far worse. There are no guarantees of success, and you operate off a single save, so you’ll want to think through potential consequences before you commit your team to action. 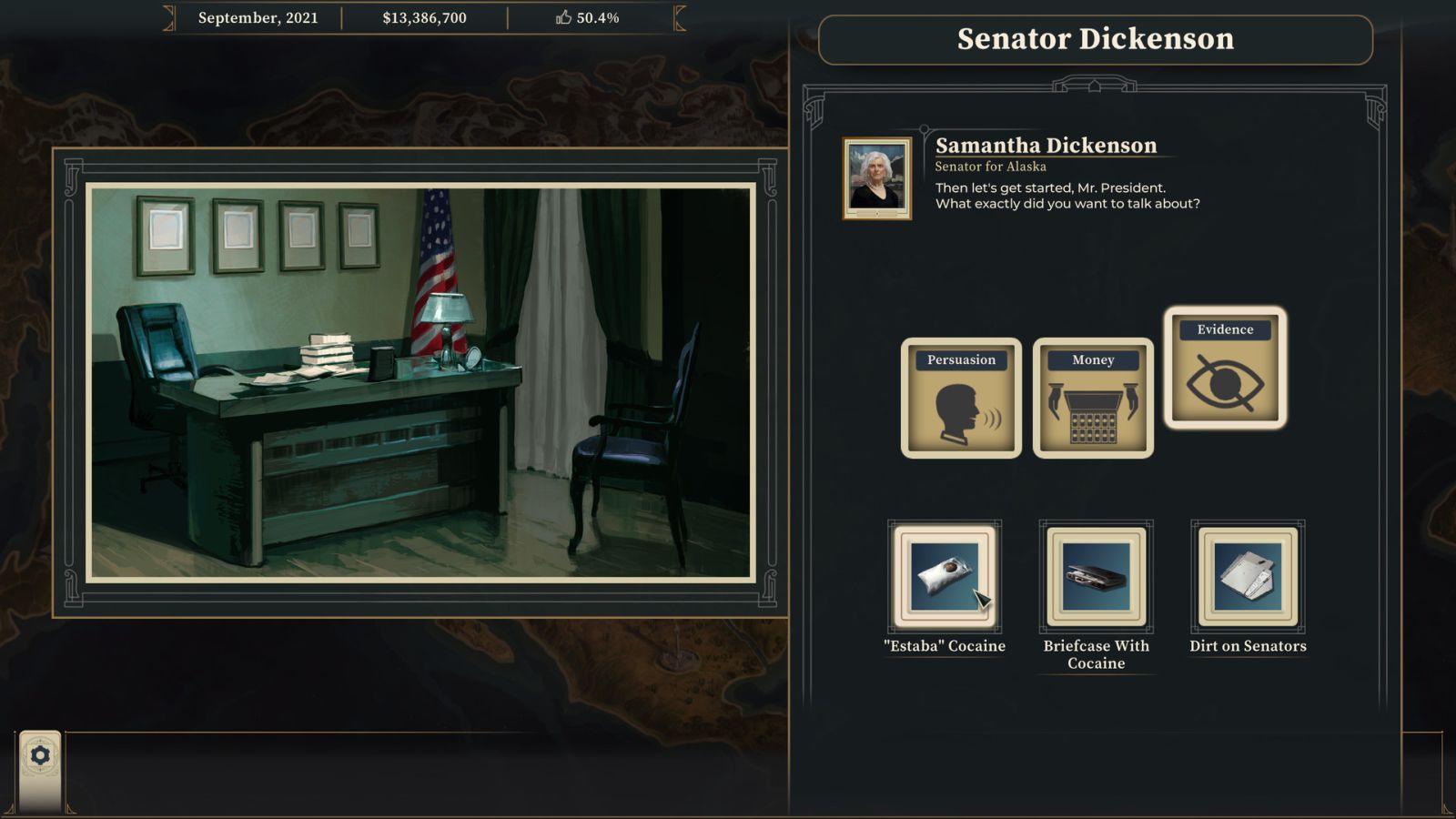 The soundtrack is a bluesy / jazzy series of just a few tracks, repeated frequently throughout. I turned off the music after about an hour as I’d heard enough of it to last a lifetime. It’s not bad, in fact it’s actually good, but there’s just not a lot of it. While there are no voice acting bits, the writing on tap is absolutely top shelf. Sure, there’s the occasional misspelling or grammar hiccup, but that’s just nitpicking.

If there’s one thing for sure, you won’t see the twists and turns coming in this one. Sure, a second playthrough isn’t going to surprise you, but that first run is a doozy. That said, there are some moments with forced choices that just run counter to the character I’m trying to create. One example (without spoiling anything) might be when you are forced to issue a drone strike or send your security guy to kill somebody. If you were planning a bloodless coup, you won’t find that here. I’ve tried to skew pure good guy more than once only to be thwarted by a binary choice of bad or worse. I suppose that might mirror real life, but over the course of 15 or so hours you’ll be constantly reminded that your job is to get that Amendment passed at all costs. 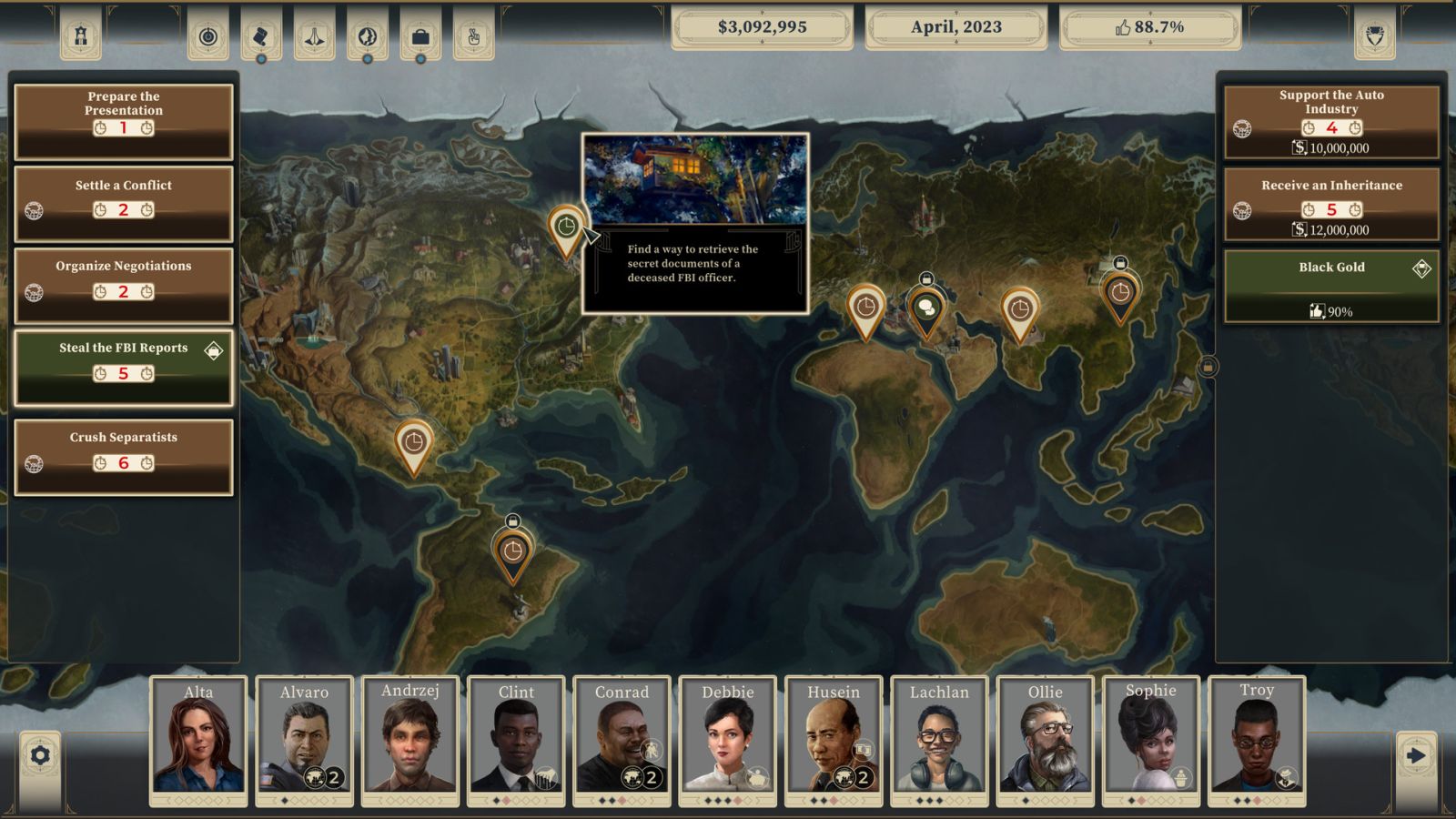 One of the things I love about this game is that, while on the surface it’s absolutely taking an obvious shot at President #45, that’s not all there is. In fact, other than the premise of a corrupt businessman taking the highest office, it has nothing to do with him. The decisions you encounter, however, are very much rooted in reality (at least when the game isn’t WAY off in left field). For example, you can take action and rewrite the Pledge of Allegiance — something that came up with relatively strong support in 2019. Another example could be entertaining the banning of violent videogames — another ham-fisted knee-jerk reaction that happened in 2019. How about censoring the Internet to make friends with other foreign powers? Since you’ll require near universal support from both sides of the aisle to pass Amendment 26, you’ll need to wheel and deal to get there, and sometimes that means entertaining unpopular things (which will cost you support) to get money that you can then spend on lobbying for more impactful things. Naturally, you can then tweet about it, because Twitter has to be part of being involved in government for reasons I cannot explain.

Normally I don’t bring up price as that’s very much a matter of personal preference, but the launch price of This is the President is just $14.99, with a 10% launch discount. That’s less than a dollar an hour for a whole lot of content. Hard to argue that.

This is the President

If you enjoy Choose Your Own Adventure type games, you’ll love This is the President. It scratches a Schadenfreude itch for the dystopian hellscape we currently live in, and it’s equal parts fun, funny, and quite disturbing along the way, even with the odd choice baked in..

Ron Burke is the Editor in Chief for Gaming Trend. Currently living in Fort Worth, Texas, Ron is an old-school gamer who enjoys CRPGs, action/adventure, platformers, music games, and has recently gotten into tabletop gaming. Ron is also a fourth degree black belt, with a Master's rank in Matsumura Seito Shōrin-ryū, Moo Duk Kwan Tang Soo Do, Universal Tang Soo Do Alliance, and International Tang Soo Do Federation. He also holds ranks in several other styles in his search to be a well-rounded fighter. Ron has been married to Gaming Trend Editor, Laura Burke, for 21 years. They have three dogs - Pazuzu (Irish Terrier), Atë, and Calliope (both Australian Kelpie/Pit Bull mixes).
Related Articles: This is the President
Share
Tweet
Share
Submit