All of us live with pain. Whether it’s injury or workout related, muscle soreness, stiffness, aches, and pains are a part of the human condition. If you work out regularly, you probably have a handful of things to help mitigate that pain. Whether that means foam rollers, yoga mats to stretch, or acetaminophen by the handful, digging into the muscle and underlying tendons is the only way to get back on your feet to fight another day. I run three to four days a week and kick the heavy bag for cardio, but I also spend eight to ten hours a day sitting in front of a computer. I needed something that would help me with tough to work areas like the areas adjacent to my shoulder blades, my neck, my lower back, and my damaged IT bands along the side of my hips — areas notorious for injury and all but impossible to hit with a foam roller. Enter the Meteor 2.0.

If you watch the show Shark Tank, you might recall the Meteor as it was extraordinarily well received and was funded by Lori Greiner. Fast forward to today and this second version comes with a better heating element, and a USB-C charge port. Let’s get into the construction of the device before we talk about performance.

The Meteor 2.0 weighs in at a compact 1.5 pounds and measures 4” in diameter. The surface is a textured silicon rubber that you can get in fire engine red or a dark grey color, if you care about matching your other gear. On the surface of the ball lies three buttons that are recessed so as to not disrupt any rolling or create a pinch point. The central button toggles power, and on either side are buttons for vibration and heat. The vibration button sets the ball to low, medium, and high vibration settings, with the heat button being on or off.

Heat is a crucial part of trigger point therapy, and this ball is no slouch in that department. Heating up to 120 degrees (I checked, and that isn’t just back-of-the-box promises – I clocked it as 124.5 degrees!) over the course of roughly 10 minutes, the Meteor lives up to its name. It’s plenty warm enough to help with muscle fatigue or warming them up for a workout, but not so hot as to be uncomfortable. When I use it on my IT band or on the side of my neck the heat makes a world of difference.

There are three vibration settings on the Meteor, and each one provides relief to different areas. I found that low works well on the neck (any higher and you’ll feel like you are in a paint shaker), where medium and high are great for my IT bands, lower back, and shoulders. The deeper the tissue pain, the more the intensity helped. Applying the heat simultaneously helped dig into my muscles in a way I’ve never managed with a lacrosse ball, massager, or foam roller. 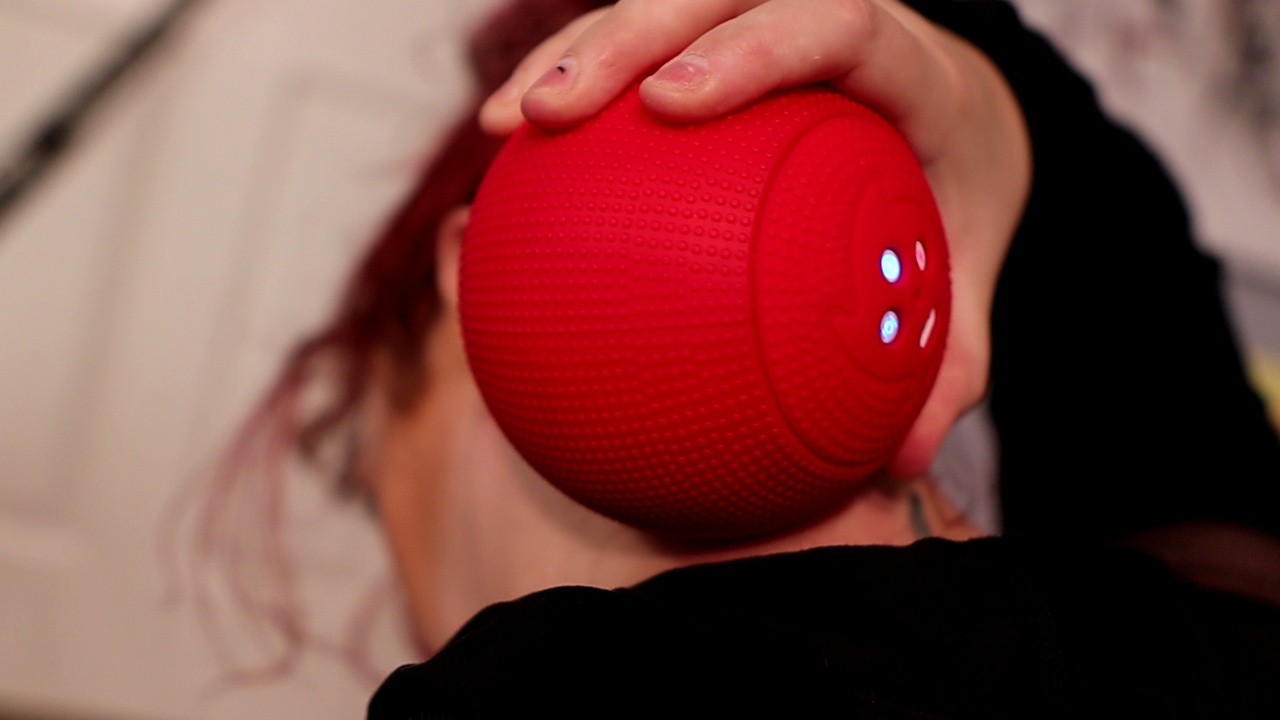 Heat and vibration will break up tension headaches.

As the ball is compact and relatively lightweight, you can use it like you would a lacrosse ball. That means you can use it against a wall, or you can lay on it various ways on the floor. The ball is completely solid, supporting up to 300 lbs of weight. The soft silicone rubber exterior cleans easily enough, wiping clean with a cloth. It’s also small enough to be tossed into a bag to bring along on trips. Thankfully, it’s also TSA approved — not that any of us are doing much travelling these days.

I have found that using the ball to warm up my trouble spots before I work out, and then doing it again after the fact was key to relieving my usual pain trigger points. Spending just a few minutes on those spots helped significantly. I also found that using the Meteor 2.0 while leaning against a wall to hit the spots next to and underneath my shoulder blades helped with keyboard fatigue. Running it along my neck with the heat was eye-rolling territory as I could feel the tension melt away — perfect after a long day at the desk.

There are competitors for the MyoStorm Meteor 2.0, but each have a problem that differentiates them into a different category. The Meback massage gun uses a percussive motor to “beat” your muscles, but it offers no heat and most positions will require a second person to apply it — you can’t roll on something shaped like a power drill. Deep tissue massage tools like the Jeanie Rub (who names these things?!) have more in common with a belt sander than anything therapeutic. Everybody and their cousin sells a massaging lacrosse ball, but none of them offer heat, and it’s the heat that makes all the difference.

The only real knock I have against the Meteor is that it doesn’t heat evenly. While the ring around the center of the ball will hit the 120 degree mark, the top and bottom stop at around 85 degrees. This means you’ll have to be mindful of the position as you use it, lest you lose the most critical advantage this ball offers over its competitors. 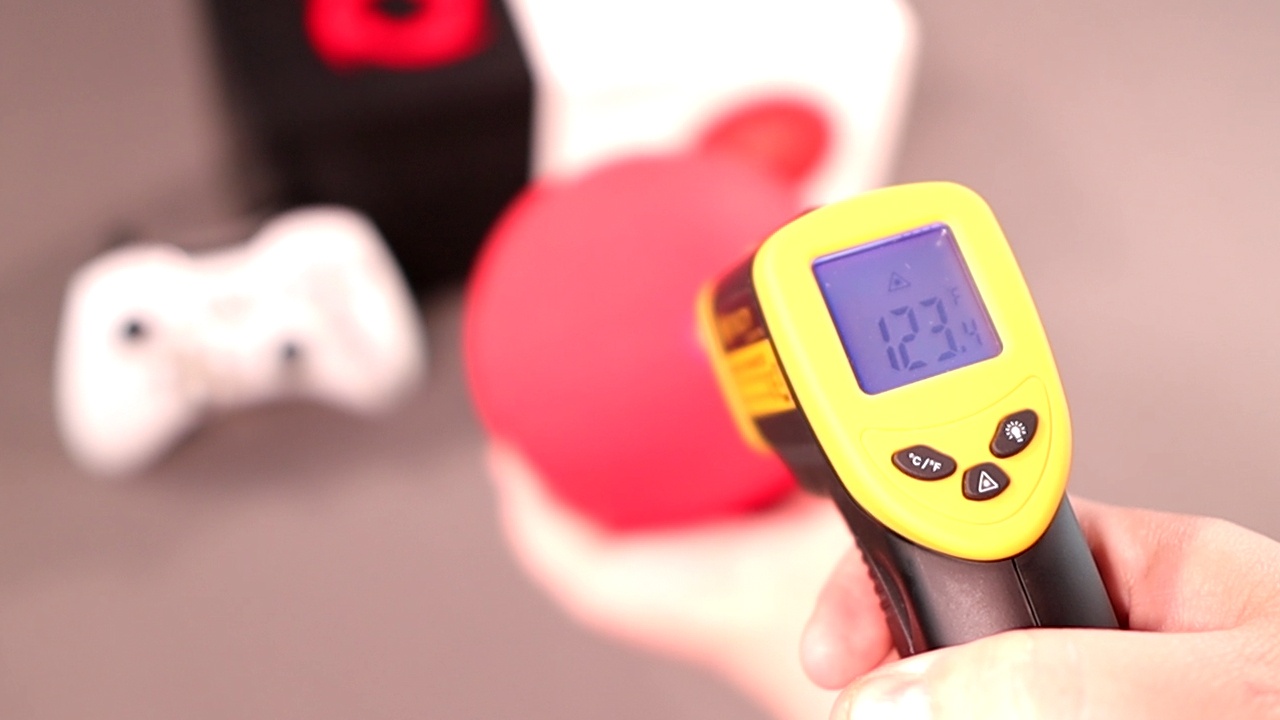 It hits the temps MyoStorm advertises

In terms of battery life, the Meteor 2.0 has a lithium polymer battery that’ll run for about six hours before needing a recharge. Turning on the heating element and the vibration simultaneously pulls that down to about 90 minutes — more than enough given that you’ll probably spend less than half that using it daily. The plug on this improved model is USB-C, so plugging it in is a breeze (though the rubber port cover broke off almost immediately). It’ll take a little over four hours to charge completely, so I just keep it plugged in when it’s not in use.

The MyoStorm Meteor 2.0 comes in at an MSRP of $149, though I’ve occasionally seen it on sale for as low as $99. The other devices I mentioned come in around the same price range, but with less features, making the Meteor pretty fairly priced. Admittedly, for as often as I’ve suffered with pain with no way to break it up, this little device is worth every penny.

I’ve been using the MyoStorm Meteor 2.0 several days a week for nearly a month and it’s now a completely integral part of my post workout recovery. What surprised me, though, is how often I’ve used it after a tough day of just sitting on my tail. Whether you are a Crossfit warrior or a keyboard cowboy, this little fireball is the key to knocking out chronic pain.

Ron Burke is the Editor in Chief for Gaming Trend. Currently living in Fort Worth, Texas, Ron is an old-school gamer who enjoys CRPGs, action/adventure, platformers, music games, and has recently gotten into tabletop gaming. Ron is also a fourth degree black belt, with a Master's rank in Matsumura Seito Shōrin-ryū, Moo Duk Kwan Tang Soo Do, Universal Tang Soo Do Alliance, and International Tang Soo Do Federation. He also holds ranks in several other styles in his search to be a well-rounded fighter. Ron has been married to Gaming Trend Editor, Laura Burke, for 21 years. They have three dogs - Pazuzu (Irish Terrier), Atë, and Calliope (both Australian Kelpie/Pit Bull mixes).
Related Articles: Hardware, Meteor 2.0
Share
Tweet
Share
Submit