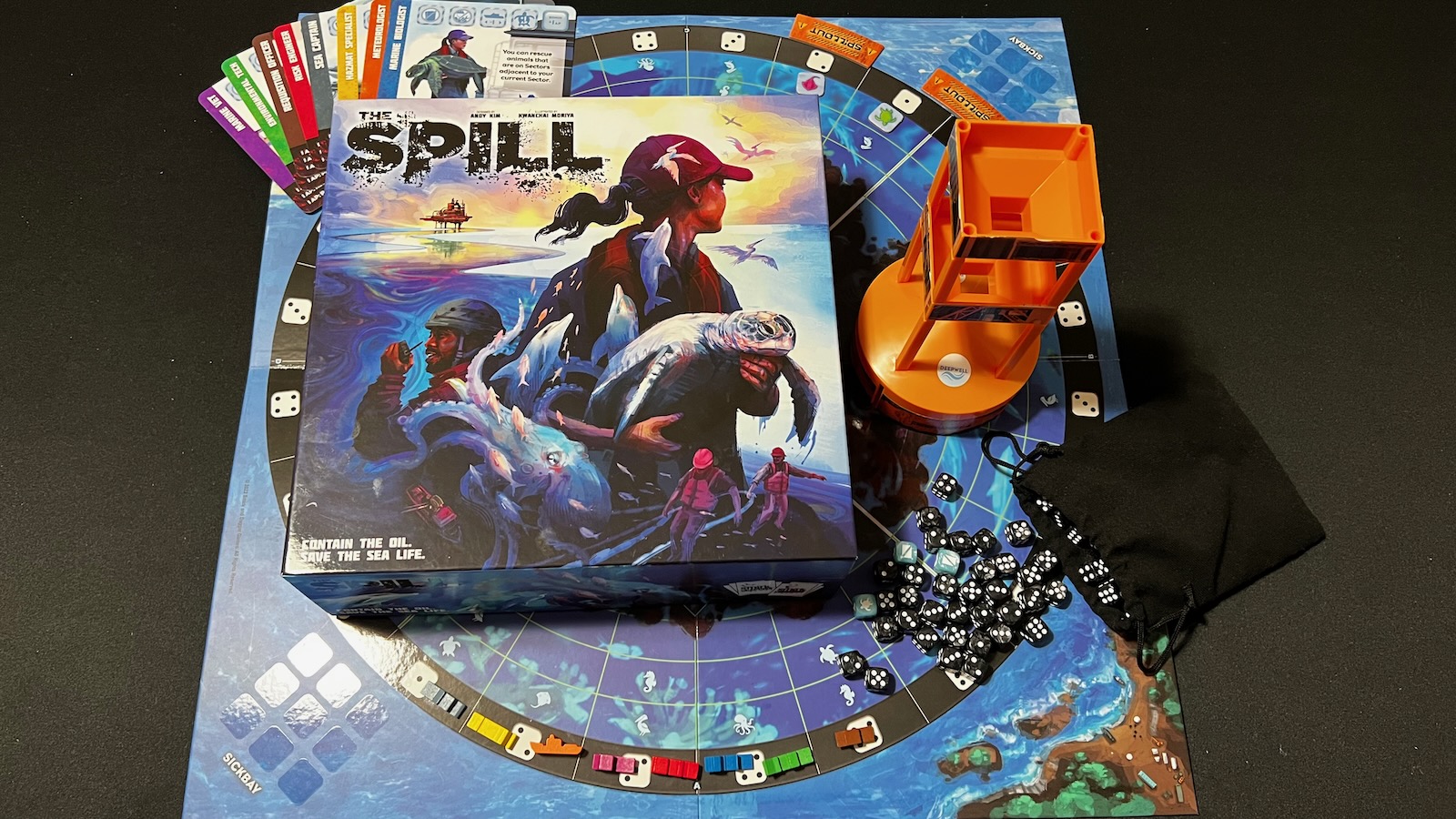 Let’s be honest; Oil is a big part of our everyday lives. From the gasoline in our cars to the plastics in our games, oil is hard to get away from. When I heard about a cooperative game about pushing back an oil spill and saving marine life, I was a little reluctant about making a game out of something so harmful, however, I was pleasantly surprised.

The Spill is a 2022 cooperative game from designer Andy Kim and published by Smirk and Dagger Games. In the game, 1-4 players utilize the abilities from a selection of 8 specialists to try to complete win conditions before one of the lose conditions is met. Throughout the game players will be pushing back oil, rescuing sea life, and utilizing a tableau of resources to win as a team. The game utilizes a main playing board, a side board for storing removed items from the game and tracking the oil spill’s progress, a variety of player boards representing the specialists, and a black bag containing all of the dice used in the game. 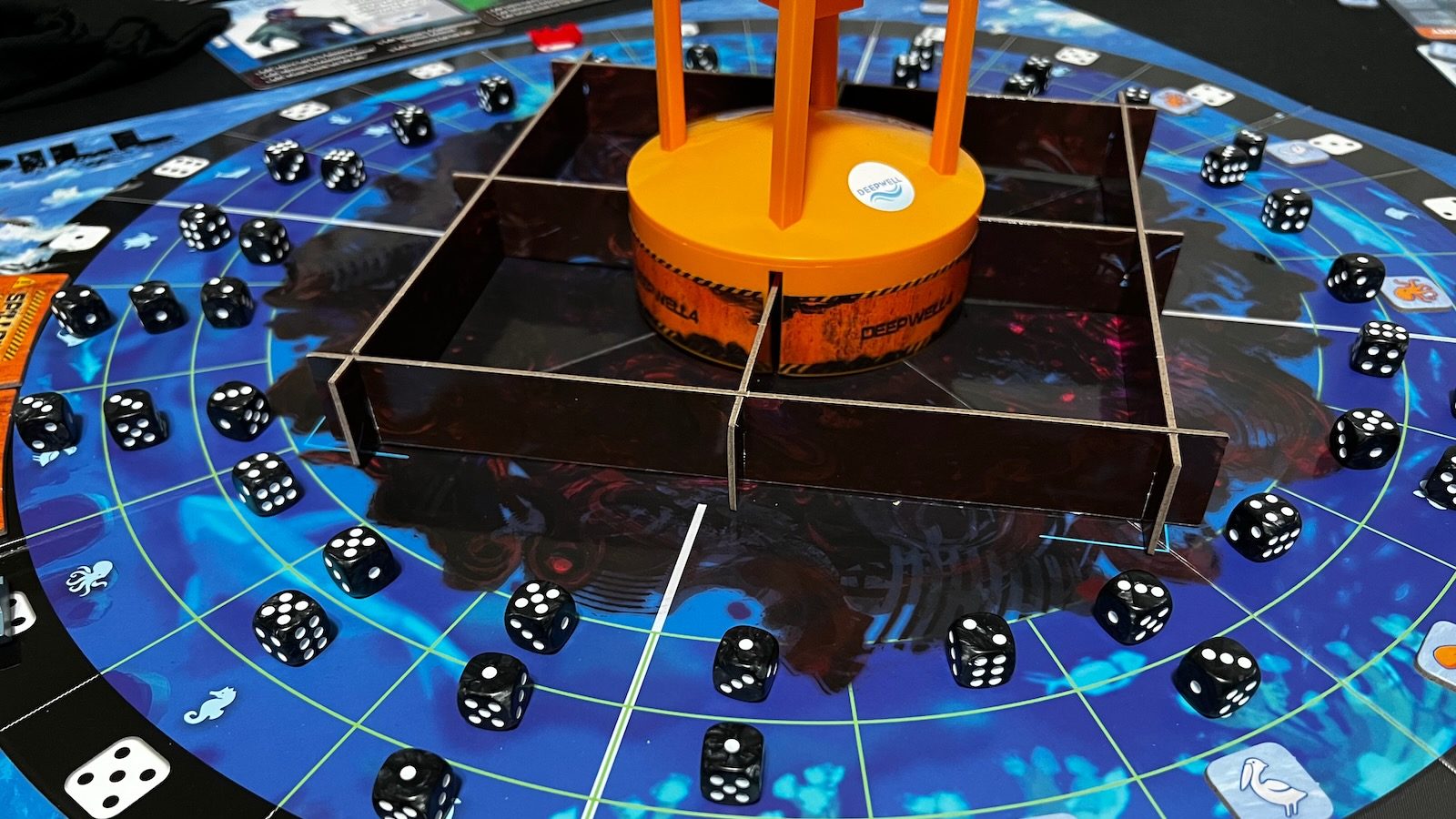 In the middle of the playing board sits a large Oil Rig dice tower called DeepWell-4. To simulate oil, players drop black dice into the top of the oil rig tower that will be distributed to different quadrants of the board. Each quadrant is divided into six sectors with three spaces apiece. Some of these spaces hold sea creatures that come in six different species. As the dice are rolled, they are placed further from the tower. Sectors that have all three dice spaces filled trigger a “Spillout,” which can lead to one of the losing conditions if six are present at the end of a player turn. The Spillouts will also increase a tracker indicating the number of dice thrown each turn. When dice touch an animal, the animal is contaminated. If not treated by the end of a turn, the animal is sent to sickbay which effectively removes them from the game. Having one of each animal or three of one kind of animal in sick bay are the other two ways to lose the game. 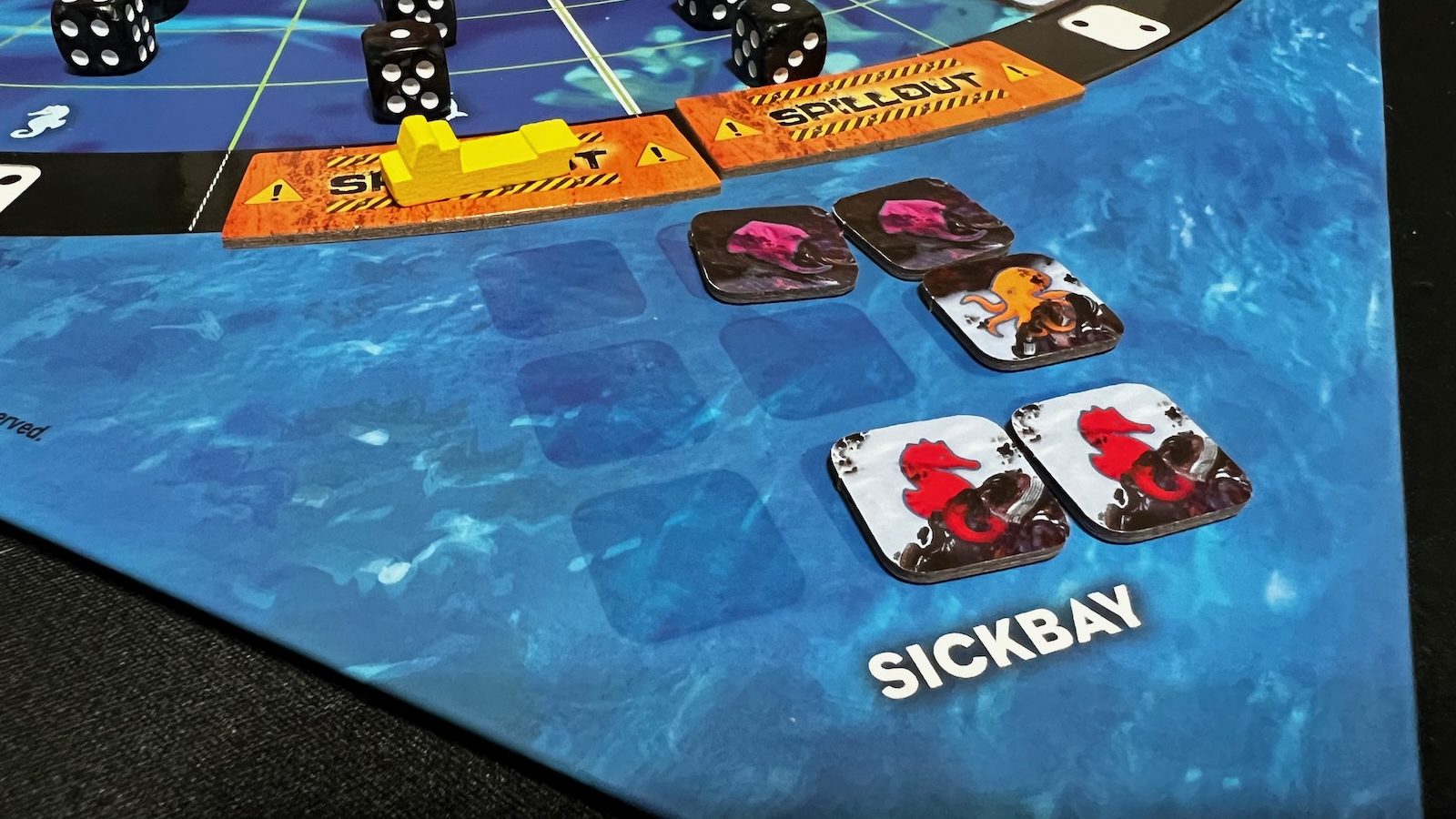 A player’s turn is divided into four phases. The first phase involves spilling more oil by reading the Spill Out tracker and running the number of dice shown through the oil rig and placing them on their designated spots. After resolving the dice, the action phase begins. The active player is given four action points to spend between five options:

Players can choose how to spend their four points and can gain up to two more action points by adding an extra dice to the next player’s spill roll for each extra point taken. After taking actions, the player will have a clean up phase and then a win/lose conditions check phase before play moves to the next player or the game ends. 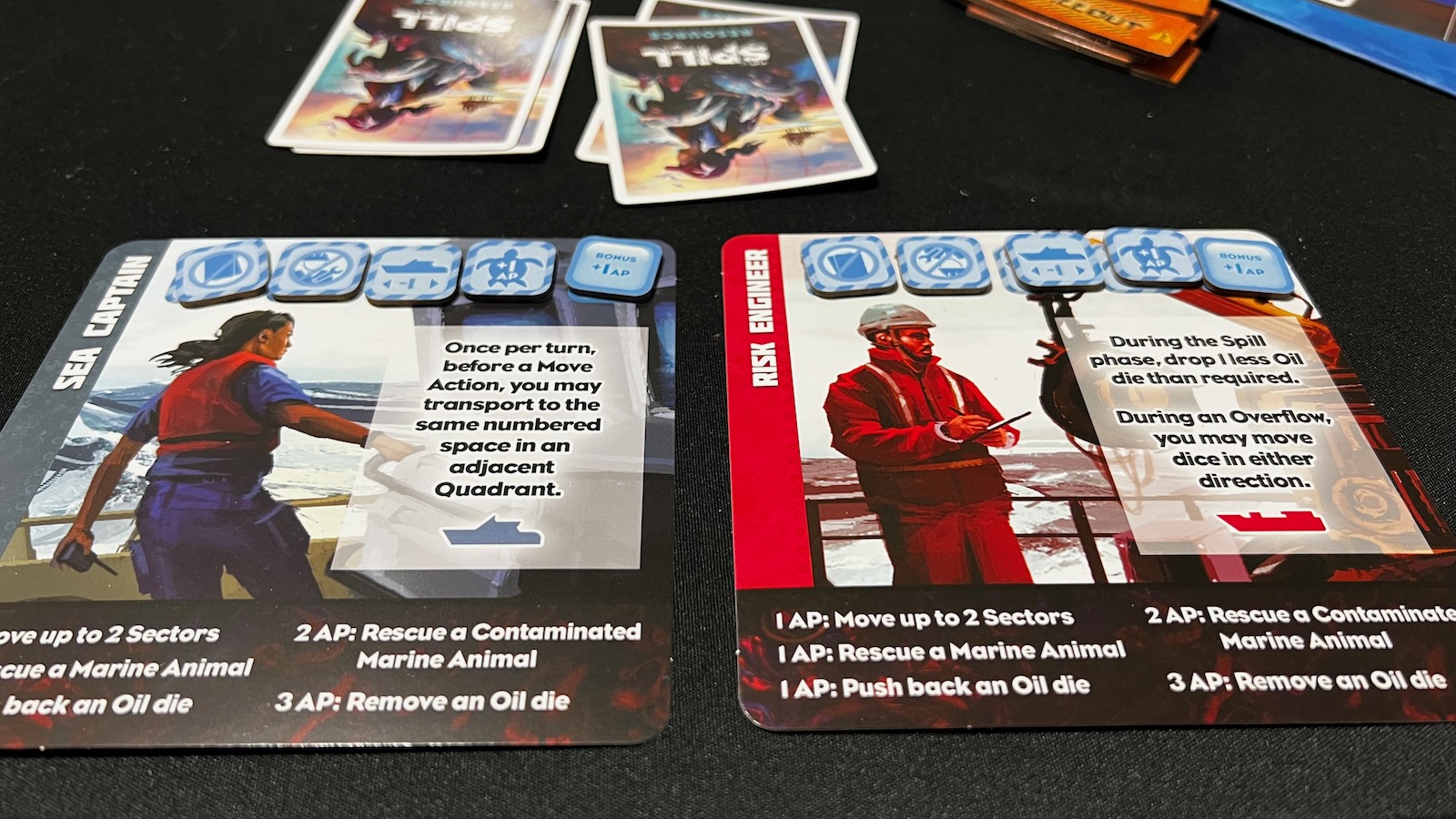 Apart from the basic actions that each player takes, there are other helpful resources available. Every game, independent of player count, will utilize four specialists. Players can choose their specialists each game or choose at random, but each specialist comes with a special ability. Some allow for easier oil removal, some make rescuing animals easier or cheaper, and some allow for specialized movement. Another helpful tool is the resource card tableau. As players remove dice from the game and rescue animals, they can earn orange resource cubes that are placed on a set of resource cards. These cards can be used by any player throughout the game if the requisite number of cubes are placed on the card.

Another set of dice with the potential to cause players headaches are four weather dice. These dice are placed in the bag and can be sent down rig as well. Each side of the weather dice alters the next turn for each player. These effects can include canceling resource cards and specialist abilities, increasing the cost to rescue animals, sending three more oil dice through the tower, or in a best case scenario, giving the player an extra action. 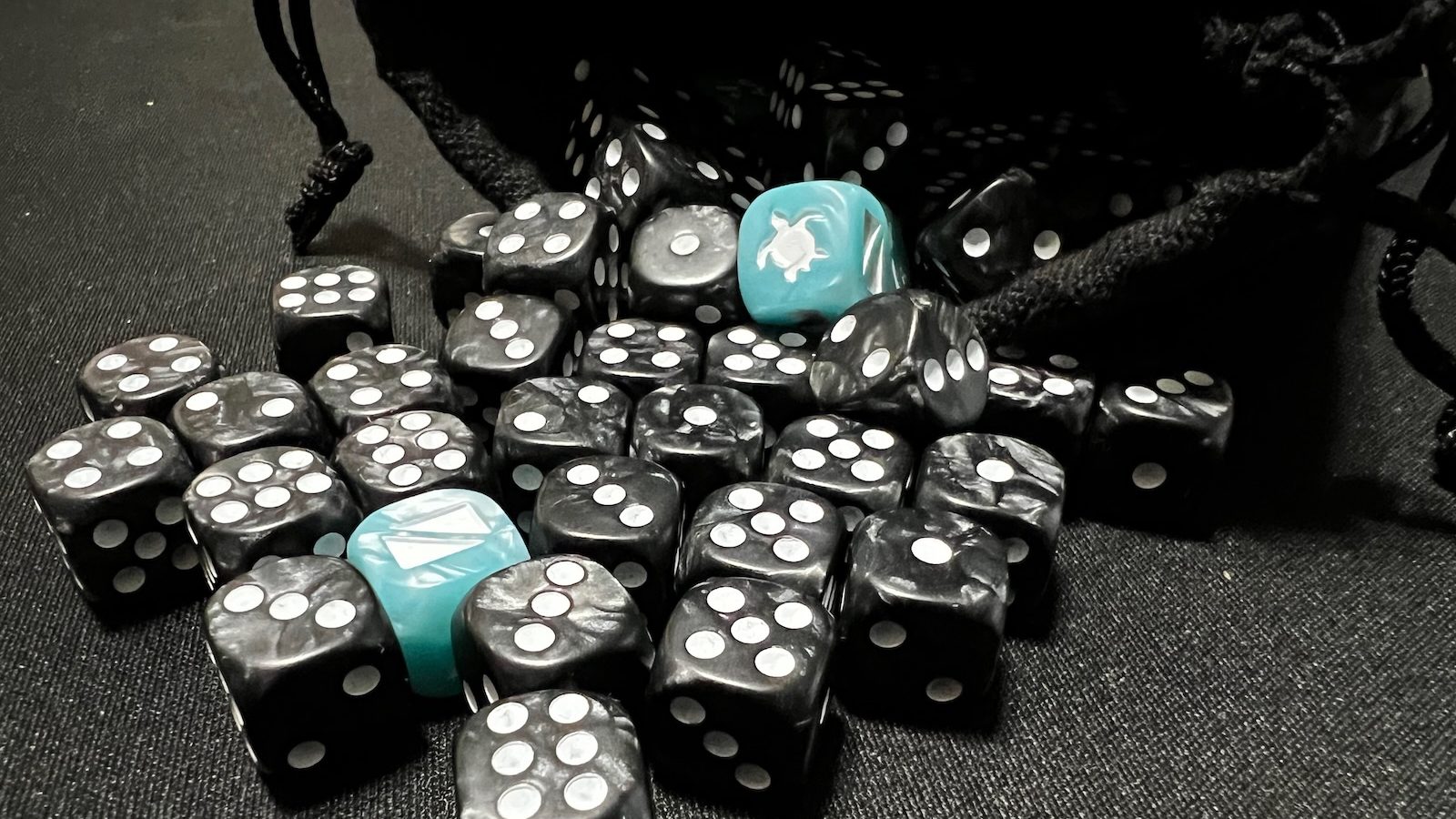 In each game, players try to meet the win conditions on one of the included cards. These goals range from removing dice from the game, collecting specific sets of animals, and keeping sectors free from spill outs. Another way to win is by ending a player turn with all of the dice removed from the bag. If players can reach either of the conditions without any of the three losing conditions present, the team wins. 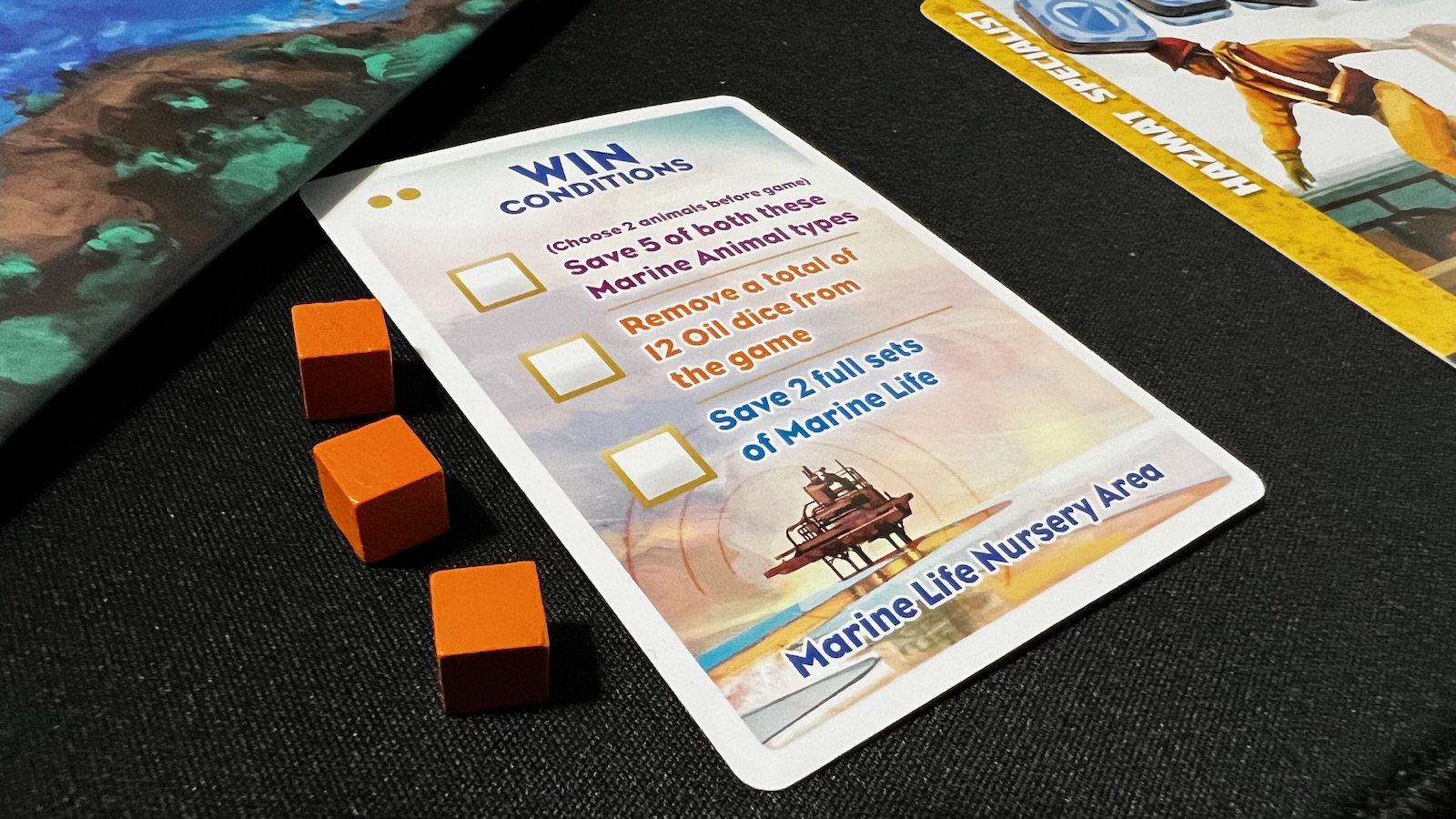 When it comes to the components and artwork included in the game, The Spill does a great job. The artwork of the specialist cards, the box, and the board draw the players in and bring some life to the game without downplaying the seriousness of the subject matter. The iconography of the game is easy to pick up and the animal tokens are especially bright and distinct. The few cardboard components are of high quality and thick cardboard. The cardstock used for the cards and the specialist mats are well done as well. The oil rig dice tower is an interesting design but is quite effective at distributing dice fairly evenly around the board. The stickers included to place on the tower are disproportionate to the sides, however, and they tend to stick over the edges. This doesn’t detract or affect gameplay. The grid on which the dice tower sits is fairly straightforward to put together, but has a tendency to slide around the board a bit as dice are placed in the tower. Recesses in the game board or some sort of rubber would keep the dice tower structure from sliding on the glossy finished board. The rule book was fairly easy to follow, but had some aesthetic issues. I’m not sure if it was the font used or the lettered bullet points, but the rule book didn’t feel friendly and inviting and could use a few more design touches. 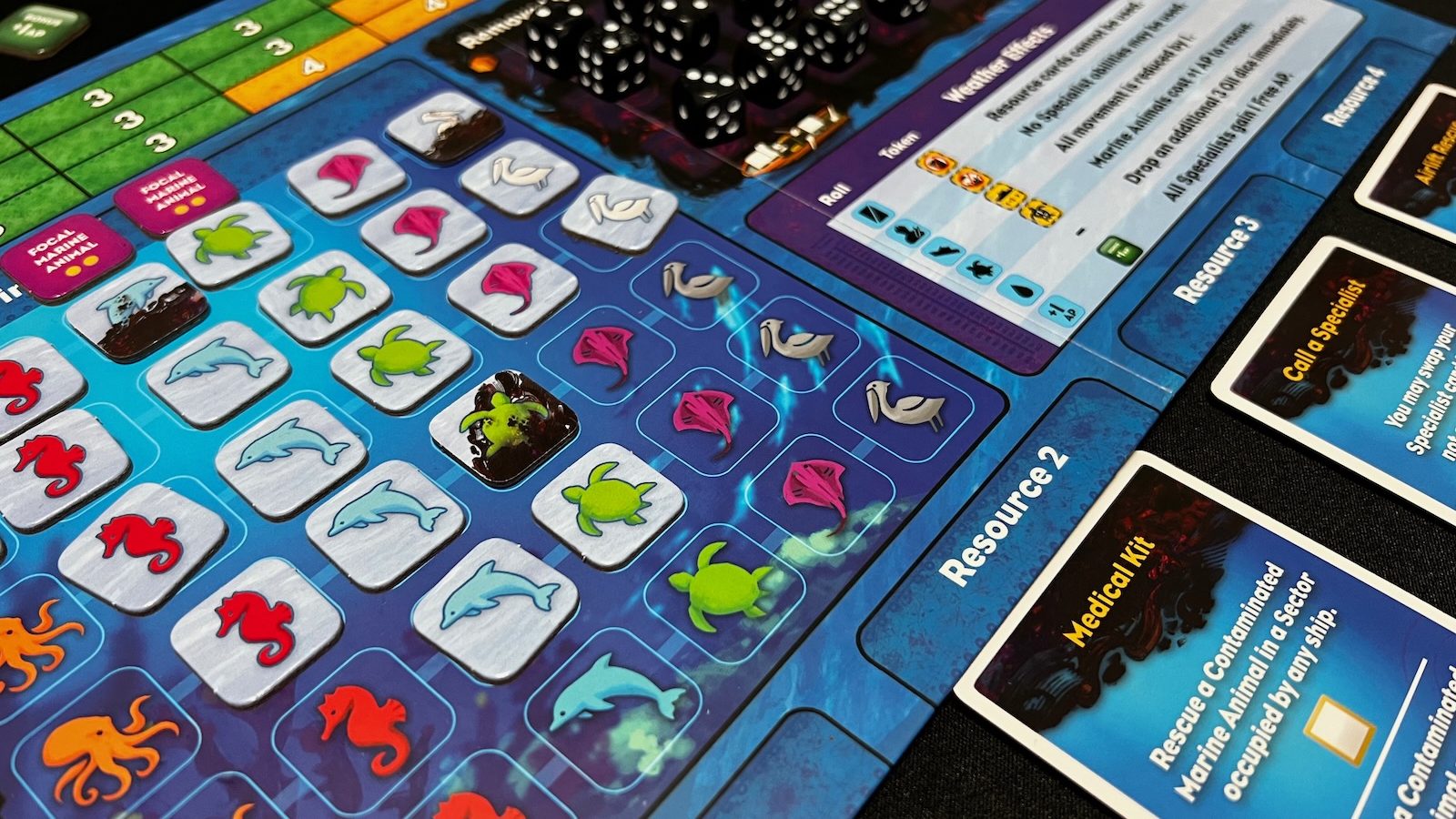 The gameplay, as stated before, was surprisingly fun. The dice tower element helped incorporate a fun bit of randomness into the genre versus flipping a deck of cards. Every time you dropped a dice down the chute, you hoped that it missed the overcrowded quadrant and didn’t add another dice to that specific sector that held the animal you needed to save. A great element to this game is the built in variability and scalability. The Spillover tracker can be set to the standard, challenging, or ultimate levels that send more dice down the tower each turn. The nine Win Condition cards are also leveled allowing players to make any difficulty combination they’d like with the goals they would like. Also included in the game are 8 different specialists, making the different combinations of abilities available enough to get you back time and again. The scalability of the difficulty level also allowed me to play this game with different groups and ability levels. The game could be scaled to play with my gaming buddies as well as my elementary school nephews. The only real negatives to the game came in some of the quick momentum shifts. In the span of about 1-2 turns, the dice rolled could snowball on players with no way to mitigate the effects of spill outs and contaminated creatures. Also, when it came to the winning or losing turn, it was pretty evident after the dice rolled what was going to happen, making the end of the game somewhat anticlimactic. 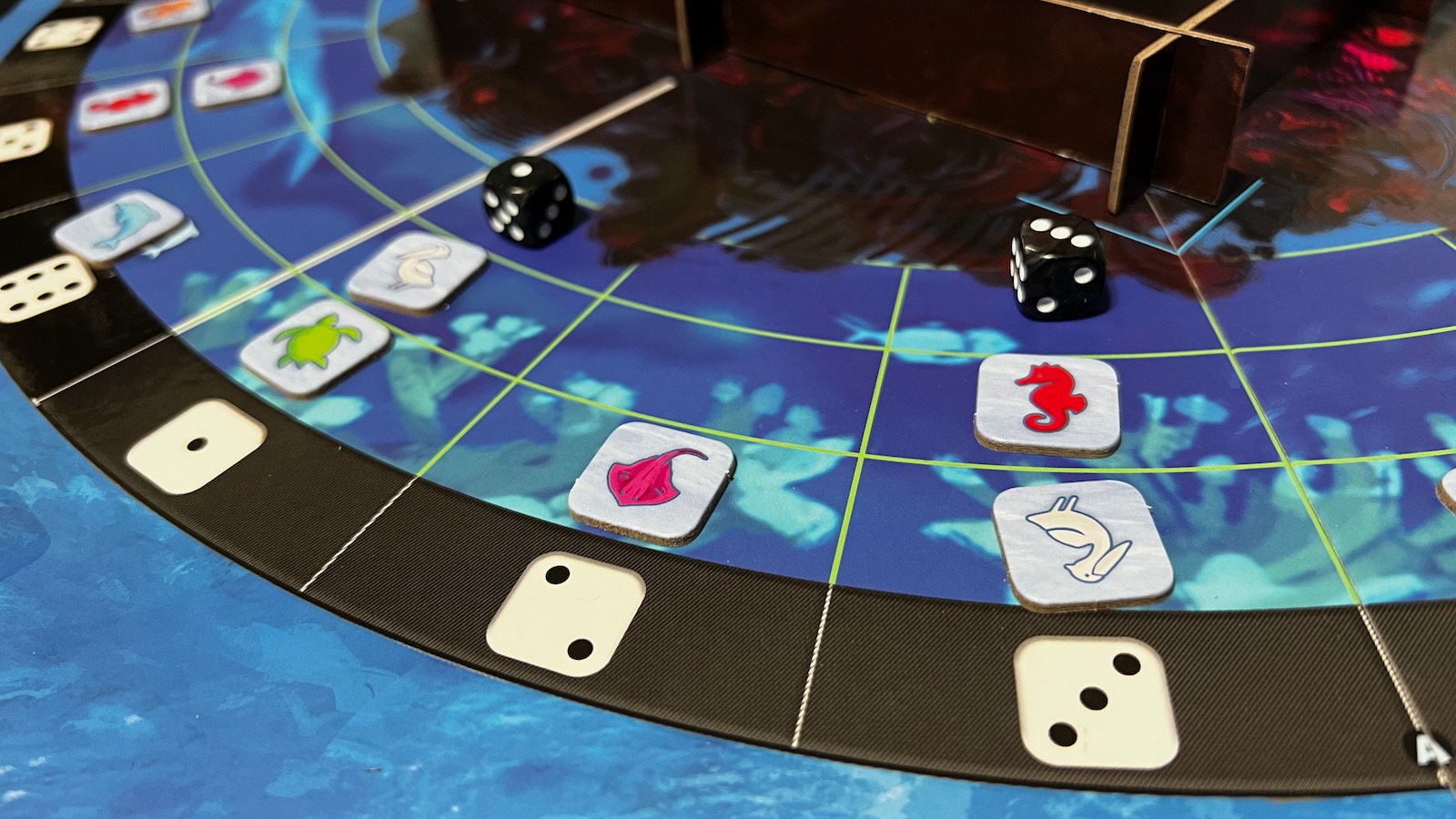 Overall, I was impressed with the quality of the game after my earlier apprehension. It definitely seemed like the game creators took some time to make a game that brought some depth to a tough subject without turning it into a novelty. The specialists represented frontline workers when a tragedy like this struck and losing a contaminated animal felt like a real loss in the game. This was a great first outing for designer Andy Kim and I’d be interested to see what comes from him next.

The Spill is a cooperative game for the whole family. The dice tower mechanics of the game make it a fun take on the disaster mitigation cooperative game and the scalability makes it fun for a variety of groups and ages.

Dan is a newly married educator from Colorado. Growing up as an Air Force dependent gained him lots of new perspectives on the world and a love for making new friends, especially over a good board game. When not at school or playing a board game, Dan is probably at the gym or a local sporting event. Dan loves heavy euros, adventure, and living card games.
Related Articles: Tabletop, The Spill
Share
Tweet
Share
Submit