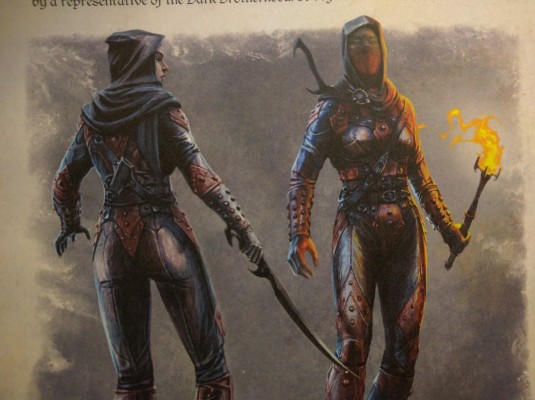 The Elder Scrolls V: Skyrim is as much an open world as it is a story you craft for yourself. Bethesda doesn’t pin you down to any particular path beyond the main story threads, instead leaving you to explore Tamriel as you see fit. To make that world worth exploring, however, they first had to bring it alive. Every spoon, bowl, chair, sword and shelf is hand-crafted and hand-placed, but nowhere is there as much care and attention to detail as the books.

Incredible detail in armor and style.

As with its predecessors, Skyrim asks you to engage as much or as little as you desire, but for those who dive deep there is a world of literary work awaiting you. Humor, tragedy, legend and even a bawdy tale or two are nestled in the homes and castles of Skryim’s residents. Maybe you find the local priest has an affinity for the 16 Accords of Madness to go along with an unnatural obsession with the Daedric Prince of Madness, Sheogorath? Perhaps it’s a sad final-day mea culpa in Confessions of a Khajiit Fur Trader. No matter where you find them or what their context, there is no doubt that the developers have put in a great deal of time, energy, and love into the literary works of The Elder Scrolls. While Titan Books couldn’t reasonably assemble all eight-hundred and twenty total readable objects in Skryim, they did collect an impressive cross-section sampling of the best works in their recently-released book The Skyrim Library: Volume II – Man, Mer & Beast.

The proud and noble Nord.

More than just a bestiary, the book is split into four sections entitled “Races,” “Creatures and Beasts,” “Warfare,” and “Factions.” Given the expansive and branching story options available in the game, it’s unsurprisingly just how content-rich each one of these sections are. Part art book and part literary collection, each page unfolds with familiar tales such as The Bear of Markarth: The Crimes of Ulfric Stormcloak, or a would-be scientist’s volume on Harvesting Frostbite Spider Venom. These texts are punctuated by beautiful pencil sketch and color bits of concept and final art to bring those stories to life. Like many art books, it’s equal parts lore and fictional history as it is illustrates how the art teams thought through the mechanics of their world — the section on how the walrus-like Horker’s multi-tusked jaws work was especially entertaining.

We’re all brave till one of these three-tusked beasts are biting at us.

The best part of The Skyrim Library: Volume II – Man, Mer & Beast is perhaps the most obvious — it’s all here. With a world as large as Tamriel, it’s impossible to expect the average player to seek out all of the possible books in the game and scroll through each. As the Sweet Mother of The Dark Brotherhood whispers her call in your ear to join her cause, it’s a little hard to want to stop and read the Volumes I, II, III, V, VI, and X of the Ancient Tales of the Dwemer, no matter how great they are. But in this format, collected all in one place and without quest pressure, I found myself enjoying stories that I’d missed, or worse, only skimmed.

The “Creatures and Beasts” section of the book could have easily been the aforementioned bestiary, but it’s instead presented anecdotally. One book is an adventurer’s two theories about where the Wispmother comes from, another details experiments on the physicalities of the werewolf. There’s even a book about all of the cats of Skryim. The books feel more authentic because they are presented from the perspective of the characters.

Dwemer armor — awesome, till you get Glass.

I’d like to also compliment the Titan Books team on their care for the materials of this book. The cover resembles a leather-bound texture, and has an embossed chain link decoration on its surface. The Skyrim dragon is also bound to the cover and the spine. The pages inside resemble parchment, artificially aged to look older and slightly worn. My other art books pale in construction to this 232-page masterwork.

Filled cover to cover, The Skyrim Library Vol. II brims with stories, artwork, maps, songs, humor and horror. It’s an amazing collection that feels more at home in this medium than it did in-game, and one every Skyrim fan should own.

Ron Burke is the Editor in Chief for Gaming Trend. Currently living in Fort Worth, Texas, Ron is an old-school gamer who enjoys CRPGs, action/adventure, platformers, music games, and has recently gotten into tabletop gaming. Ron is also a fourth degree black belt, with a Master's rank in Matsumura Seito Shōrin-ryū, Moo Duk Kwan Tang Soo Do, Universal Tang Soo Do Alliance, and International Tang Soo Do Federation. He also holds ranks in several other styles in his search to be a well-rounded fighter. Ron has been married to Gaming Trend Editor, Laura Burke, for 21 years. They have three dogs - Pazuzu (Irish Terrier), Atë, and Calliope (both Australian Kelpie/Pit Bull mixes).
Related Articles: The Skyrim Library Vol II
Share
Tweet
Share
Submit