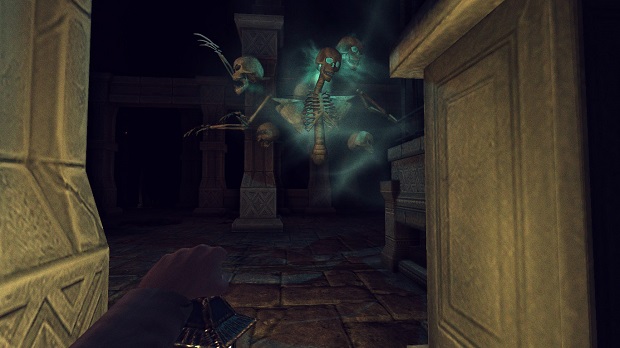 Though I consider myself a pretty big baby, I’m a sucker for a good horror game. Any time I have the opportunity to review a game that promises to scare me, I pounce on it with equal parts fear and excitement. Unfortunately, not only is UnderDread not very frightening, but it’s not very good in general.

The story opens with a fairly basic premise: a father and his daughter have been traveling and stay at a settlement to rest, when suddenly the daughter disappears in the middle of the night. While on his quest to find her, the father hears of a local detective who might be able to help. Asking around about the detective’s whereabouts leads the father to a creepy castle, and that’s where the game begins.

What have I stumbled into here?

The first section is short and designed more like a tutorial to familiarize you with the setting and controls. However, the explanatory text sped by too fast for me to take it all in, so I had to consult the menu several times for reminders of the keys. One disappointing thing you learn right away is that the cursor never changes, leaving you continually unsure whether you can interact with objects or pick things up. Certain items such as journal pages, hints, or shields will give off a distinctive glow, but otherwise it’s a lot of guesswork.

Exploring the castle, you’re treated to the standard fare. There’s a dining hall with overturned tables and broken shelves, a study packed with books, and piles of gold coins in chests. For the most part, the art in UnderDread is okay. Skeletons and dead bodies with protruding weapons are scattered everywhere, but the blood splatters underneath them are pretty pale and unrealistic looking. Fixtures with animated blood, such as an angel statue spitting a blood fountain, get the color a bit better.

While the graphics are somewhat plain and uninspired, they’re greatly hindered by their unpolished feeling. Besides just the variation in blood shading, there are flickering textures everywhere you look, text descriptions of what you just picked up lag on the screen, and the shadows cast by swinging your lantern around look blocky and unnatural.

On top of that, I’m really not a fan of the sound design. The music is passable, but all the ambient noises layered over it leave something to be desired. Your footsteps sound like you’re walking across a sticky floor. At times the sound effects are delayed, such as a drawer creaking after you’ve already fully opened it. The game informs you that sound cues will guide your path, but instead of having the subtlety and nuance that lends itself to that style of design, they’re just grating. Frequently, loud noises like metal clanking will startle you, but more often than not they aren’t an indicator of a monster or a change in the environment around you. They’re just a cheap scare.

As far as monsters are concerned, there’s only one enemy that patrols the castle: a floating skeleton encircled by extra skulls. He’s more irritating than imposing, with a wail like a baby that’s fallen ill. Most of UnderDread is less than terrifying, and the few moments that I genuinely let out a gasp while playing were caused by one-off creatures or visuals that appeared randomly.

I definitely panicked and wasted a shield on this the first time through.

Interaction with the monster is based around a hide mechanic. You can crouch down whenever you want, of course, but you’re only considered hiding in particular spots, as indicated by an eye that pops up on the screen. There are no heart-pounding chases in this game; if the skeleton catches a glimpse of you, you become rooted in place and have to just wait to be killed. As you might imagine, this mechanic gets annoying, and its only purpose seems to be shielding the fact that the AI isn’t very intelligent.

The monster’s roaming pattern also seems like a way to lengthen the game’s playtime. Instead of cowering in fear when an enemy approaches without warning, this one just slows you down when solving puzzles and makes backtracking to pick up items or stray journal pages a massive pain. With stretches of hiding, hefty load times, and framerate issues, you often feel like gameplay is reduced to a crawl.

Leave me alone so I can find those ritual daggers.

Overall, UnderDread feels underwhelming and sloppy. The hint system is your main way of understanding and completing areas, but hints don’t always spawn. This leaves you totally confused and wandering aimlessly, wondering how you’re supposed to progress. I’ve also encountered at least one game-breaking bug. There’s a part where you open a gate and it triggers a boulder that rolls down the stairs behind you. If you get hit by the boulder but the damage isn’t enough to kill you, you’re frozen in place and you have to start all over.

I would be willing to excuse a lot of this if the story was engaging. However, even that is poorly done. The narrative is framed by short cutscenes, but it’s told primarily through journal pages. There are three different types of entries: the detective’s journals, the madman’s journals, and the scholar’s journals. The detective’s writing consists of straightforward observations that vaguely address puzzles. Though the story is set in the early 18th century, there’s a lot of modern language used. The madman is who you assume to be the current or previous resident of the castle, and his scribblings are mostly nonsense.

I think they were trying to achieve an older writing style for the madman, but the result is virtually intelligible.

The scholar’s journals are where the meat of the story is supposed to come in. While both the detective’s and madman’s entries are standalones, the scholar’s are one continuous tale. Because of this, if you have any missing pieces, you’re robbed of those connecting details. Now I am highly meticulous when I play video games; I don’t want to leave any stone unturned. Even with the threat of unceremonious death looming over me, I opened every drawer and peered into open spaces on bookshelves. Yet there are plenty of blanks in my journal and I’m left scratching my head.

One interesting thing I discovered from the early entries is that UnderDread is actually supposed to be a Slender Man game. The descriptions of a tall, well-dressed man with no face kind of gave it away. After a bit of research, I learned that this game is a PC port of a mobile game called Slender Man Origins 2 Saga. Both are exactly the same, except for the inclusion of in-app purchases to give you more hints or shields in the mobile version. There’s no Slendy to be seen in either game, but the skeleton wraith represents the restless souls of the people he killed… or something.

I really tried to give this game a fair chance. I went through all the typical motions associated with horror titles, playing with the lights off and headphones in, but that didn’t provide the promised atmosphere or tension. There were a couple of instances where I felt the satisfaction of overcoming a challenge or my heart skipped a beat at a scare, but those were few and far between.

UnderDread is a Slender Man game disguised as an 18th century horror game, but there are no Slender Man appearances and it isn’t scary. If you dig far enough down, it has a redeeming quality or two, but at the end of the day it’s an unpolished game with a weak story that doesn’t do much more than waste your time.

Sarah Marchant is an office admin for a nerdy t-shirt company. She has a soft spot for indie games, a passion for story-driven titles, and a weakness for cooking games and anything with zombies.
Related Articles: UnderDread
Share
Tweet
Share
Submit