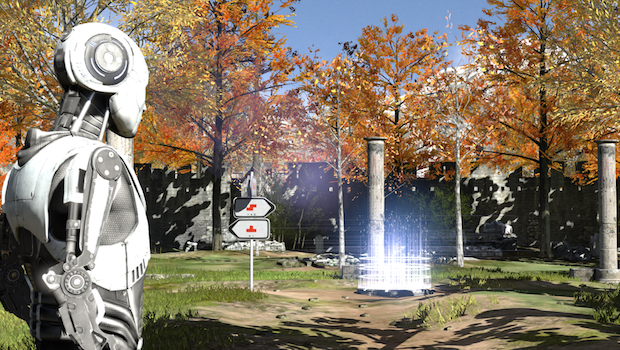 The Talos Principle is a calm, reflexive game that wants you to question the very nature of existence. It’s a big ask for anything, let alone a video game, but The Talos Principle succeeds because of its engaging puzzles, its tranquil pacing, and its thought provoking yet unpretentious narrative. And now, a whole new audience can experience this modern masterpiece on the PlayStation 4, as The Talos Principle makes the journey over almost flawlessly.

I’ve already reviewed The Talos Principle back on PC last year, so I won’t go too deep into the game’s specifics here. Essentially, you play as a sentient robot who has been tasked by Elohim, your world’s God, to solve puzzles and ascend to a higher plane. But don’t go into the tower – for that way lies only death. Along the way, you’ll find computer terminals and audio logs that give you backstory about your predicament, in addition to providing some tense philosophical dialectic with a ghost that lurks inside the machine. It’s a fascinating story, and to go into it any more would spoil the surprise.

The puzzles are equally as brilliant, and while they’re a touch on the difficult side (especially near the end of the game), they never feel unfair. You move between puzzle rooms, connecting laser beams to receivers, manipulating boxes, recording your actions to effectively create a double of yourself, and much, much more. There’s a lot to keep track of, and it can feel overwhelming at times, but that “Eureka” moment feels spectacular every time, especially when many of the puzzles make you feel like you’re breaking the game to solve them. And there are a ton of puzzles – your first runthrough could easily take 20-30 hours, and that’s not even factoring in the multiple endings and hidden secrets to find. Seriously, The Talos Principle is up there with Portal as one of the greatest narrative-based puzzle games ever made (honestly, I think it’s better than Portal, but that’s just me).

In addition to the phenomenal main story, you also get the expansion, Road to Gehenna. While not quite as transcendent as The Talos Principle itself, Gehenna has a few things of its own to say – mostly about the nature of creativity, what it means to create, and when it’s OK to let those creations go. There are a bunch of neat surprises within the story, as you trawl a message board filled with interactive fiction and a series of short stories about the continuing adventures of one ‘Jefferson Goldblum.’ For a game about robots, there sure is a lot of humanity on display, and Tom Jubert and Jonas Kyratzes’ writing continues to shine here.

The puzzles themselves don’t add any new elements to the game, but they’ll push your brain to its absolute limits. Road to Gehenna assumes you’ve beaten the main story, both from a narrative and gameplay standpoint, so its challenges are incredibly difficult right out of the gate, and it uses the provided tools in some really unique and inventive ways. One of my favorite puzzles takes place in an open field – an area that would typically be used for simple set dressing – and asks that you find ways to connect the lasers from one end of the field all the way down to the other side. Another ingenious puzzle is set in a crater in the middle of the Egyptian puzzle hub area. Road to Gehenna tacks on another 10-15 hours of fantastic puzzles to an experience that was already full of brain-busters.

Strictly from a gameplay and narrative perspective, The Talos Principle is a complete success on the PS4. Unfortunately, some technical hiccups prevent it from realizing its full potential. For one, the texture and shadow quality feels a bit muddy in comparison to the PC version, like everything just feels a bit lower res. Compounding that issue are the frequent bouts of frame rate stuttering you get if there’s too much going on where the camera is facing. None of this is game-breaking by any means, but it’s certainly inferior when held up to the PC version, which is clearly the better-looking and more fluid of the two.

Puzzles get increasingly complex and start to utilize the landscape to mess with you.

It’s still a minor complaint when compared to the whole package, though. I lamented when The Talos’ Principle’s mid-December release date in 2014 disqualified it from many people’s game of the year discussions (though it was my personal favorite game of the year, and ranked third in the site’s own GOTY awards), and now that it’s back in the public eye, I hope more people get a chance to play the truly transcendent experience that The Talos Principle has to offer. There’s not much like it.

While some graphical issues keep the PS4 version from matching its PC counterpart, The Talos Principle remains one of the most interesting, intelligent, and inspiring video games ever made. Absolutely essential gaming.