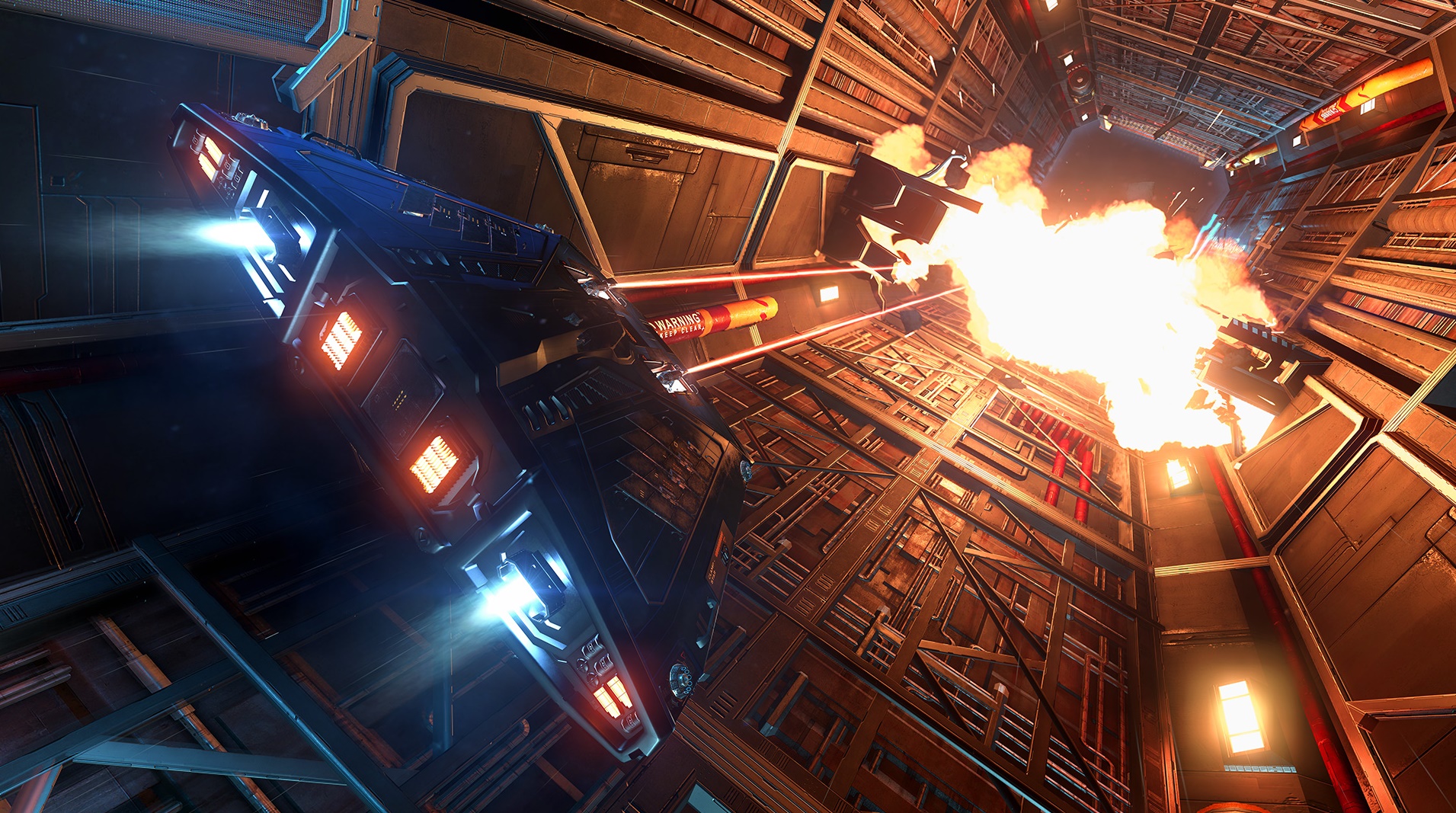 Have you ever gazed up at the stars and wondered what it’d be like travelling from system to system, hoping to see the wonders of the universe? Elite: Dangerous gives us a taste of that, and while it’s been available on the PC for some time now, the Xbox One release is upon us. Let’s dive right into what makes this game great, and where perhaps you should be aware of its challenges.

In case you hadn’t heard of Elite: Dangerous, it’s a massively multiplayer space flight game including trading, mining and fighting. The sky’s the limit, as they say, and the entire Milky Way is offered up by the folks at Frontier Developments in this Xbox One console exclusive. Included is the new game mode Close-Quarters Combat (CQC) Championship – a PVP matchmaking arena that has its own progression system with vehicles and upgrades and gets you right into combat action.

Graphically, Elite does not disappoint. Delivering sharp textures, beautifully rendered ships and stations as well as the effects of travel and combat, it might be hard to find fault – until it starts dropping frames. Not that it’s frequent or generally interrupts gameplay, but choppiness and slowdowns do sometimes occur.

The attention to detail is consistently high, from space travel to landing on or inside space stations. There are a lot of really nice visual touches, including pushing in the right stick to look around your ship’s cabin and interact with screens to the left and right of you. You can also get a third-person camera view of your ship, though that mode should only be used when you know you’re safe from collision or attack.

While Elite: Dangerous takes liberties with the deafening silence of outer space, the sweeping scores and sound effects are well placed, convincing and much appreciated. In fact, a lot of the rules of space aren’t followed in favour of a more compelling game. The combat physics, for instance, feel more like WWII dogfights than zero-gravity combat as actions like ship rotation experience drag.

CQC Championship mode brings the combat action to the forefront without all that pesky worrying about dying.

Having done some research on the PC version, I was surprised at how functional the Xbox One controls are compared to a game originally designed with flight-sticks and throttle controllers in mind. Key elements include re-allocating resources on-the-fly, as well as being able to toggle flight controls mapped to the right stick simply by pushing in the left stick.

Getting gamers to discover how to play the game is Elite’s Achilles heel. Regardless if you choose to play the full game in “solo” or the massively multiplayer “open” mode, you aren’t offered much in the way of direction or assistance. In fact, while the tutorials will guide you through controls, they do little to introduce you to what it is you should actually be doing.

As it stands, you start with a lowly ship and a bunch of credits and are given the galaxy to explore – and if you take the time to research the game online you’ll find a lot of helpful tutorials on YouTube. There is commodity exchange, combat, mining, smuggling and even exploration – but with no direction from Frontier, it can make the game seem unapproachable.

It is easy to overlook the depth that the different political factions, trade routes and economical demands – there is some real simulation depth to Elite. I would recommend they provide more links to videos directly from the tutorial section to help. Missions that introduce us to scanning another person’s cargo, mining, and aspects of the galactic marketplace for trading commodities and calculating travel distances would be a boon.

Breathtaking scenes, though you’d never want to dogfight in this camera view.

As you take on missions, you have choices which directly impact you – for instance, if you don’t smuggle goods and instead take on above-board jobs, the local police forces will scan you and let you continue on. If you are attacked by pirates, they can and will save you. There are comms channels as well, and if you were so inclined, I imagine this could be a lot of fun with a group of friends.

Speaking of travel, the reality of space flight may also put some gamers off. You will be spending a lot of time watching far-off places get closer – often one site will take minutes at a time. There are events that can occur that break the monotony such as being attacked by pirates, however in the end you will spend a lot of time watching distance-to-destination numbers get smaller and smaller.

Looking ahead of the curve, the upcoming PC expansion Elite Dangerous:Horizons promises to offer new loot and crafting systems as well as customizable characters. Furthermore, there will also be direct interaction with planets including surface exploration and exploring in a rover. It is unclear as to when it will be coming to Xbox One, however CEO David Braben had confirmed in a Reddit AMA that we can expect to land on planets in the future.

If you’re willing to put in the time to research Elite: Dangerous’ game elements, you’ll likely find a bargain for the amount of time you can sink into it. With deeper sim roots and ship selections than old favorites like Wing Commander: Privateer and a far more robust commodity exchange for those who love smuggling or trading, not even the occasional hiccup and steep learning curve should hold you back.

Frontier Developments have done a magnificent job of creating an affordable universe that is fun to play. With tons of game styles and the entirety of the Milky Way to explore, this one is truly for space sim buffs with one caveat - if you’re feeling lost, we recommend you check out video tutorials online.

Born and raised in Winnipeg, Canada, at a young age I was forced to decide whether the harsh northern winters were going to claim my fingers, or to turn to the safer pursuits of indoor activities. Little did I know that a little game called Ninja Gaiden would bring my digits more pain than frostbite ever could. Starting with Vectrex and C64 games and moving forward through the era of electronic entertainment, I sampled as much as I could in the different platforms, and began my interest in PC gaming from wrestling with DOS memory management. While console games were a part of my earliest gaming memories and I certainly had played on most platforms including 3D0, all things Nintendo, PS1 and the like, truly the PC was my domain until the Xbox. As an old PC gamer, I ever chased the cutting edge technology. Eye of the beholder with CGA 4 colors was my first step down the the path of blowing thousands of dollars on PC upgrades over two decades. Ultima 7, with the Guardian talking to me through my monitor, still haunts my dreams and keeps me ever hoping for a decent Ultima 8 and 9. From the 3DFX SLI VooDoo2s and Aureal to today's GPU driven DirectX games, the new and shiny pictures seem to keep me going. My PC gaming has slowed down with the market shift though, and although I have choice games that will ever be on PC, I have found myself in console gaming with a bit of portable gaming in my life. Back around the turn of the millenium (and long before fatherhood), I had fired off an email offering to help Ron with a little-known site called ConsoleGold. Little did I know it would be be a part of my life to this day. While I've seen my fair share of shovelware (thanks Ron!), I manage to try and find the fun in most games. Leaning towards sandbox and action titles, I've grown to love games for their potential to reach art. Console agnostic and excited for the progress of tomorrow, I fancy the latest and greatest, but still enjoy the good old classics ... as long as they've been revamped from their 8bit graphic roots.
Related Articles: Elite: Dangerous
Share
Tweet
Share
Submit