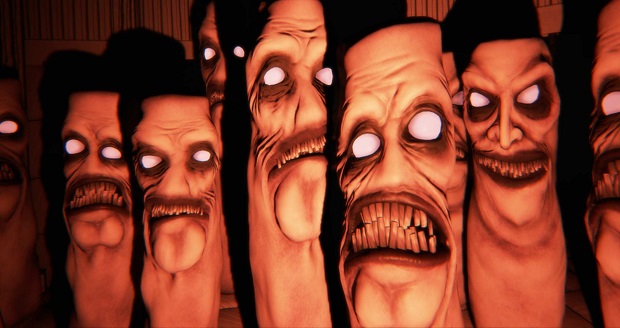 When I first watched the trailer for Albino Lullaby, I remember thinking, “this could be the perfect game for me.” I like games that will creep me out and give me a bit of a scare, but not at the expense of my nerves or my stomach. The promise of no jumpscares and no gore suited me just fine. Not only that, but it was also an ambitious tagline: just how frightening can a game be without those things?

The game opens with cutscenes featuring a house burning and a car crash caused by swerving to avoid a pale figure in the dark. The accident is presumably where you’re captured – the introduction feels pretty disjointed. When you wake up and are finally able to move, you find yourself trapped inside a hanging cage. It tumbles down, breaking open on impact, and shadowy creatures with glowing eyes praise your ability to escape. Then the story begins.

You’re given some quiet time in the beginning to explore and soak in your environment. The setting is definitely eerie, with unsettling portraits on the walls and grim machines in the rooms, and I really love the art style. The graphics are cartoonish and slightly whimsical, not your typical horror game fare. For such a surreal story, they work perfectly.

The color palette of this game features a lot of blues, greens, and reds.

Unnerving signs and notes are scattered throughout the house. These clues help you piece together that a cult-like group of deformed creatures called the Grandchildren live here. They simultaneously believe in torture and good manners, and they worship their leader, Grandmother.

When you initially encounter the Grandchildren, it’s absolutely terrifying, and any snippets of their dialogue you happen to overhear are pretty creepy, but for the most part, they just slide menacingly toward you. They move slowly, so they’re fairly easy to get away from. Only when you’re totally surrounded are they truly frightening and make escaping difficult.

Progress in this game comes from solving puzzles. Because you’re primarily concerned with not running into the Grandchildren, the puzzles tend to be pretty simple. Most of them are find all of the buttons, press all of the buttons, and return to the main hub so you can proceed. Occasionally there’s a change-up and you have to plug in some cords or find a key to unlock a door.

The notes help guide your path so you know you’re going in the right direction. Some meaningfully contribute to the story, while others feel like a waste. It’s a little bit irritating to pause when you’re being chased and pick up a note, only to see that the message is insignificant or a joke.

However, I can handle nonsense notes. One of my main issues with this game is the checkpoint system. Checkpoints are very sparse, most of the time only occurring at the beginning of chapters or objectives, so if you’re having trouble navigating an area or finding all the components of a puzzle, it may become increasingly frustrating to push through and progress.

The entire incoming prisoner area gives me the creeps.

Albino Lullaby was also released fairly unpolished. Though most of it plays fine, there are several areas where you can encounter game-breaking bugs. The developers have been very proactive in working with the community to fix bugs and provide new save games so people can continue playing, but it seems to me that they should’ve done more testing beforehand so they could offer a less buggy finished product. They didn’t even add achievements until after the release, and right now they aren’t functioning correctly. Maybe Steam’s Early Access program would have been beneficial for them.

In spite of these issues, I do think it’s worth a psychological horror fan’s time to play this game. The house where the game is set is very curious, with a Victorian aesthetic and tons of gears tucked away that shift the rooms around. This has a way of making you feel unreal, as if nothing in the world is steady or safe. The presence of the Grandchildren does create tension, because whether they’re rambling to themselves angrily or slipping around quietly, it’s greatly startling to round a counter and suddenly collide with a cluster of them.

I hadn’t anticipated that this game would be episodic, because the originally advertised title on Steam was “Albino Lullaby,” so that decision feels kind of like a cheap ploy. Nevertheless, based on what I’ve seen so far, I’m very intrigued about what direction the next episode will go in.

Albino Lullaby: Episode 1 offers a genuinely fresh take on the horror genre, with a bright color palette, a topsy turvy environment, and nuanced enemies. In spite of its low points, it's definitely worth experiencing. With time it should become more polished, but for now if you want to play it, you'll have to brace yourself for bugs.

Sarah Marchant is an office admin for a nerdy t-shirt company. She has a soft spot for indie games, a passion for story-driven titles, and a weakness for cooking games and anything with zombies.
Related Articles: Albino Lullaby: Episode 1
Share
Tweet
Share
Submit