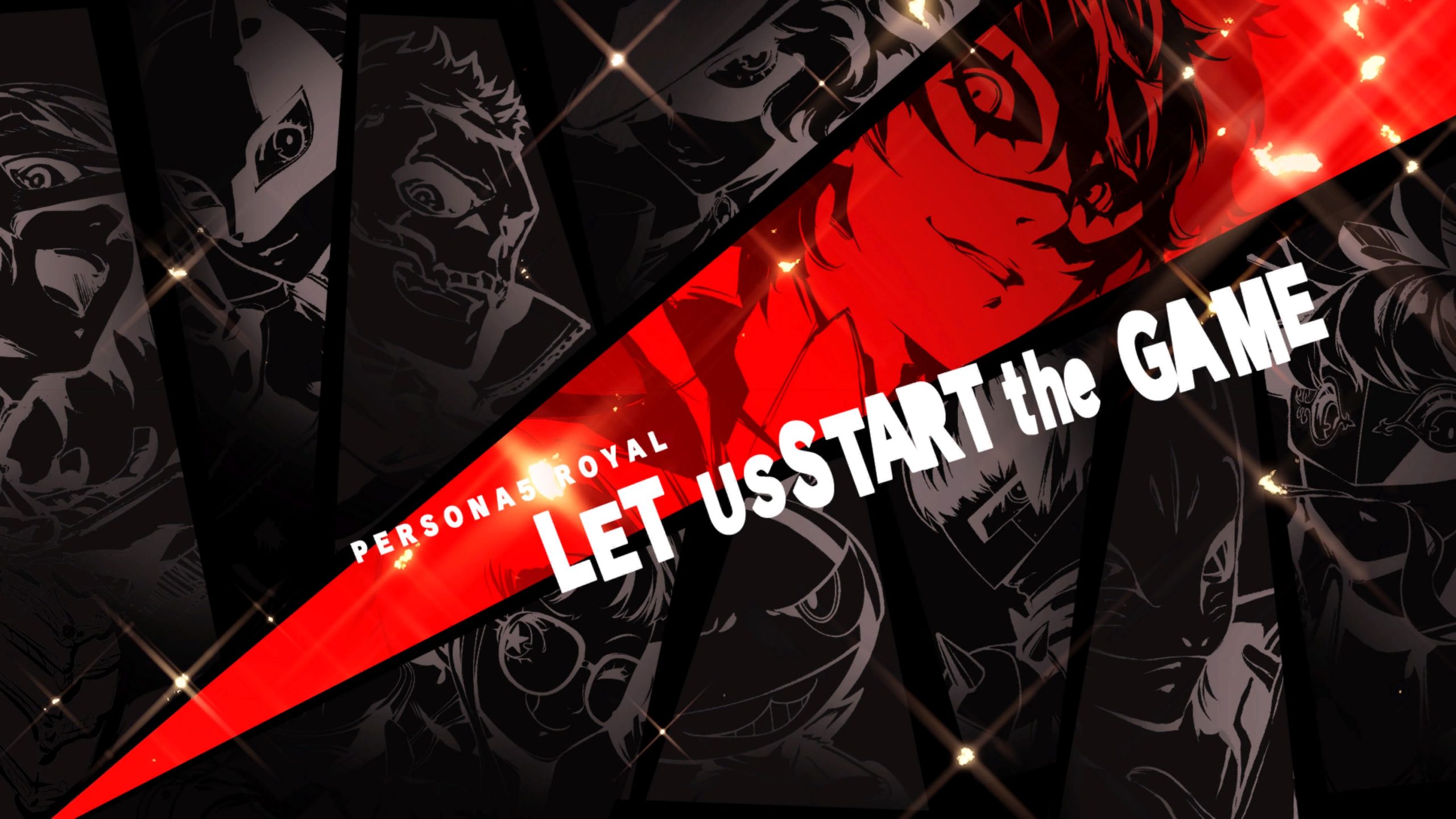 When Persona 5 released in the West in 2017, it was lauded for being the genre-defining experience that it was. We at Gaming Trend even gave the game a coveted score of 95. Three years later, Persona 5 Royal perfects the formula that stole gamers’ hearts everywhere. By fixing some flaws, freshening up visuals, and adding in heaps of content, this upgraded re-release fulfills its fanbase’s desires and then some. Even better, Persona 5 Royal gives gamers the perfect opportunity to play the definitive version of a modern classic. 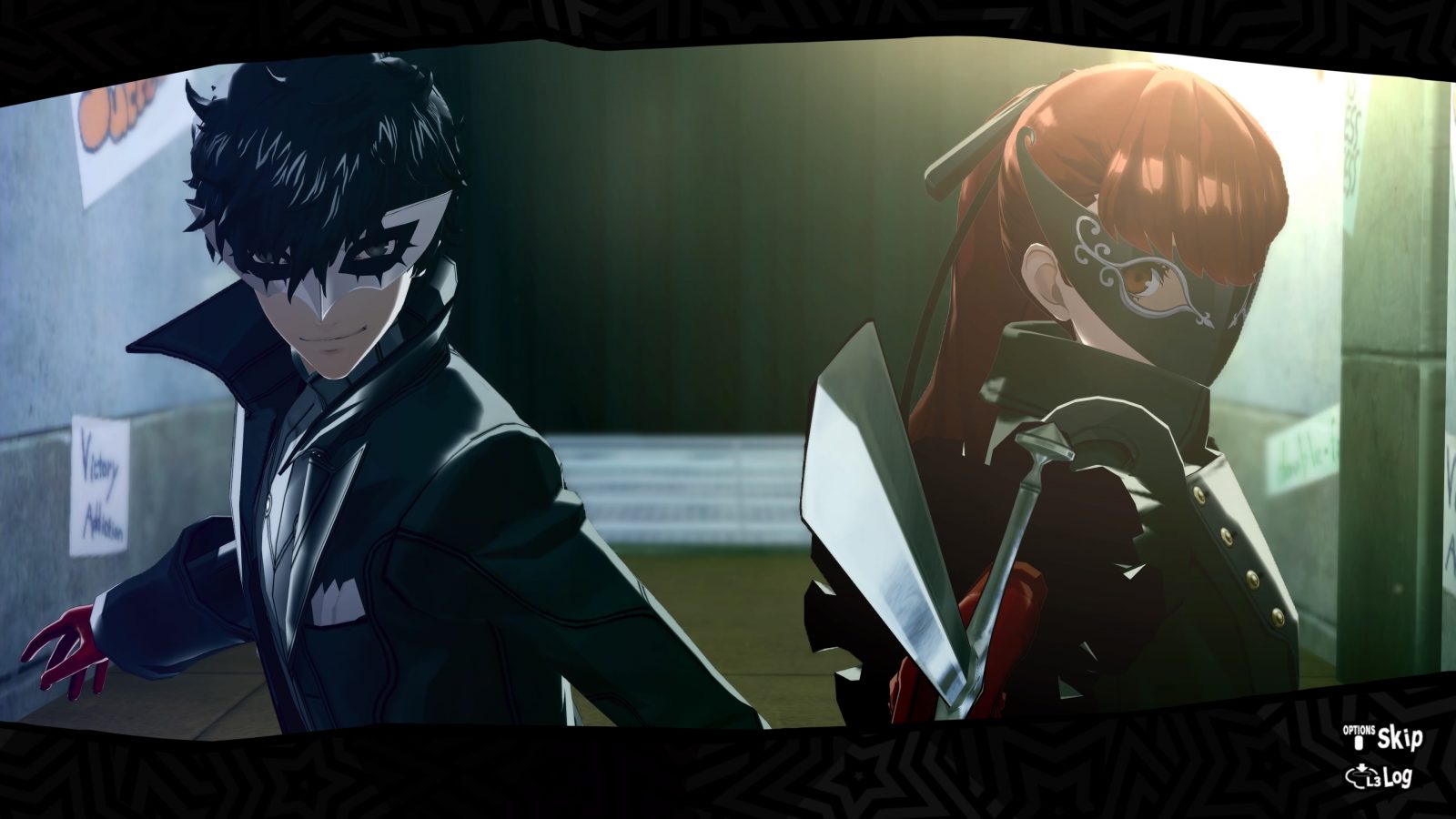 Protagonist Joker getting ready to kick some tail with the newest member.

The story follows the Phantom Thieves, a team of teenagers rebelling against corrupt adults who manipulate and control the innocent lives of others for their own gain. This group has access to a cognitive reality called a ‘Palace,’ which is the materialized manifestation of a person’s distorted desires. The seven Palaces in the game represent the Seven Deadly Sins, and they are still a joy to play through. Every level’s structure has been refined in this re-release to accommodate two new major Palace features. The first of them is the grappling hook, which allows you to zip your way through previously nonexistent areas. Waiting to be uncovered in these new areas are ‘Will Seeds,’ a new type of collectible. They transform into a new Skill Accessory once all three are collected within their respective Palace. These features give extra incentives and satisfying mobility to exploration. 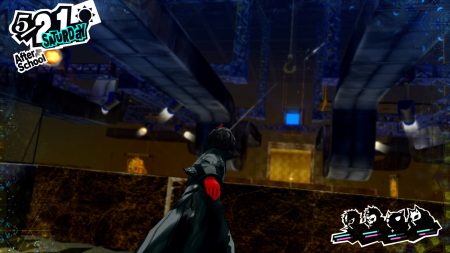 Infiltration of Madarame’s Palace got even more interesting!

Combat has also had some tweaks to ensure the exhilarating turn-based action of the original is more robust and dynamic than ever. Boss battles now have new phases that interweave with the narrative incredibly. E.G., Kamoshida’s victims will come to assist him with special attacks. New Shadows, the regular enemies, have also been added. One noteworthy inclusion is the Disaster Shadow, which can explode and damage surrounding enemies in equivalence to a team member’s final blow. They also drop rare items, which is always a plus.

Enemies are not the only ones who are improved upon. The Phantom Thieves have new tricks up their sleeves (sometimes literally.) The first striking addition is the fact that ammo replenishes after each fight, as opposed to at the end of a Palace infiltration. Above all changes, though, is the addition of ‘Showtime.’ This is a new type of attack involving two team members and occurs by chance when an enemy is near-death, or a Baton Pass is made to your nameable protagonist. Showtime is a powerful move that is executed in spectacular mini-cutscenes. From an enemy interrupting Ryuji’s meal made by Yusuke to Morgana’s gun-loaded flower gift to Ann, these scenes are stylishly and comedically memorable. 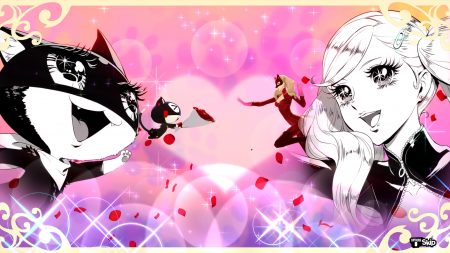 As seen here and in other Showtime attacks, Persona 5 Royal ain’t afraid to make fun of anime.

The other part of the ‘Metaverse’ you will be frequenting is ‘Mementos.’ This is like the public’s Palace, and it comes in the form of automatically generated dungeons with individual floor levels. Here, you can fulfill requests to change the hearts of minor distorted persons as well as to grind money/exp. This time around, a new layer to Mementos is added with Jose, a mysterious new character that makes his debut dwelling around the dungeons. Upon an encounter, he requests that you collect flowers and stamps from podiums found on each floor. These can then be used as currency to buy items or even change the cognition of Mementos — which, in turn, increases the rewards given in battles. This is a superb new addition to what was already pristine dungeon-crawling. 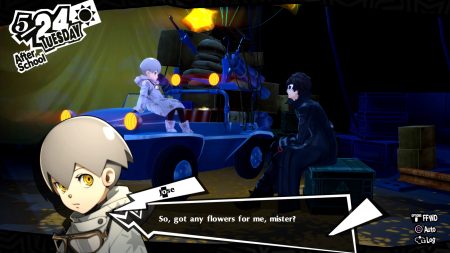 Flowers disappear upon leaving Mementos. Make sure you trade with Jose!

Next up is the heart and soul of the adventure — outside the Palace-residing Metaverse — student life. In-between the badassery of executing Showtime in battles and delivering justice, you will have to balance a routine filled with social hang-outs and various side-activities. Activities increase your skills while hanging out with your partners in phantom exploits builds up a relationship strand mechanic system called a ‘Confidant,’ which adds exclusive perks and play out over beautifully presented character arcs. Given the limited number of days to see and do everything, it was overwhelming to keep on top of a schedule. To resolve any confusion, Persona 5 Royal adds ‘Assist Commands,’ which give you nifty suggestion shortcuts based on what friends want to hang out and what skills you should work on. Assist Commands, among other quality-of-life improvements, consequently make the game feel a lot more user-friendly. 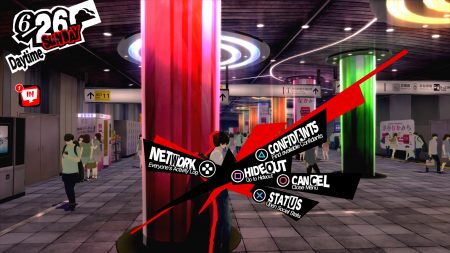 No longer lost in the underground.

There are now many new activities to partake in during the day-to-day gameplay loop. Home to most of these is the latest place in the already long line of locations — Kichijōji. This is a bustling shopping neighborhood that includes a handful of fantastic leisure activities for you and your Phantom buddies. For some alone time, you could meditate at the temple, which increases the capacity for skill points (or SP) in battle. There is also a place called ‘Penguin Sniper’ where you can play Billiards and even take part directly in a fully-realized Darts mini-game. Finally, a jazz club tops it all off, letting you invite a friend to drink a stat-boosting cocktail and listen to music. Overall, Kichijōji alone contains the best activities in the whole series. 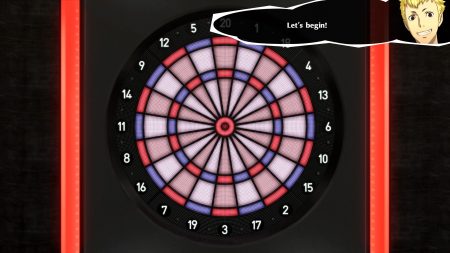 This darts mini-game also makes intuitive use of the DualShock 4’s motion controls.

It has been widely reported that there are two new confidants, but I personally count Akechi’s rework as one too. Instead of increasing your relationship with the Detective Prince automatically as the story progresses, he is available to hang out with, mainly in Kichijōji. His scenes contain some superb moments that not only build his character but are great examples of foreshadowing. The other two confidants are school counselor Maruki and transfer student Kasumi, with the latter being a wholly new member of the Phantom Thieves. Kasumi’s confidant scenes are not completely compelling, but her involvement in the main story is quite congenial. Maruki, on the other hand, is an all-around fascinating character whose story involves the aim to understand the human heart by reflecting upon emotional pain and cognition. The two new characters, then, meld masterfully into the main story both thematically and narratively, with particular kudos to Maruki. 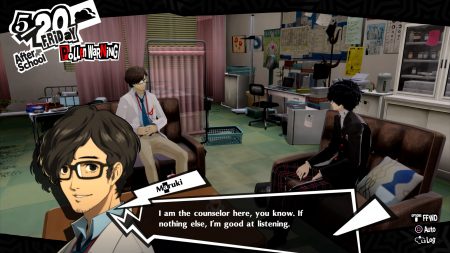 He is almost too likeable at times.

Going back to the Metaverse, the Velvet Room has had reasonable renovations done to make the mysterious metaphysical location and its inhabitants even more engaging. Sometimes the room can be set to red alert, which allows the fusion of more effective personas with unique move sets (albeit with a risk factor of something going wrong with them.) There are also ‘Challenge Battles,’ a new mode which is a test of skill throughout rounds of enemies. The fewer turns taken and the more damage dealt to enemies, the greater the reward. Caroline and Justine, wardens of the Velvet Room, can also be taken on a tour to various locales, including the new aquarium and maid cafe. Regardless of where you take them, the two have never been cuter, and the thirteen different scenes are humorously appealing. 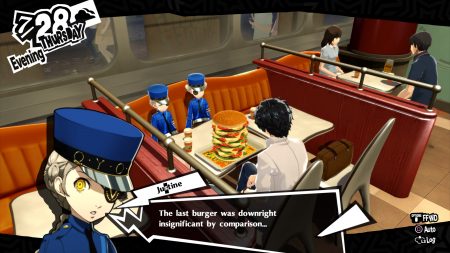 Another step towards ‘rehabilitation.’

In the audial-visual department, Persona 5 Royal does not disappoint. There are dozens of new tracks added to the soundtrack that stands among the series’ best. ‘Take Over,’ the new battle song that plays after an ambush, might even be better than Last Surprise. The new songs that play during Mementos are rocking instrumentals that are varied sonically, and tracks that play during the epilogue are haunting piano tracks reminiscent of Nier Automata. On the graphical spectrum, the art style is still stunning, especially when considering this was originally a PlayStation 3 game. The unmistakable character portraits on the bottom-left corner that appear during dialogue are also more detailed, and even have totally new portraits that allow conversations to become incredibly expressive. 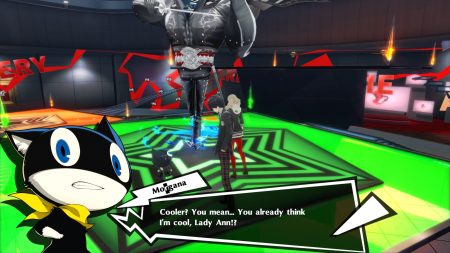 You will get to see even more of Morgana fawning over Ann.

If you decide to buy the game, you will boot up to a menu that presents an option named ‘Thieves Den.’ This is a chill-out spot, a card-playing joint, and a gallery of various curiosities. It is one of the most amazingly peculiar modes in recent memory. There are multiple showcasing podiums in the center for you to place statues, personas, and other things. Once you place them, Phantom Thieves enter the room to share their thoughts. Elsewhere, there is a lounge for watching cutscenes, music-playing devices, an upstairs floor for changing characters, and even tables for playing a card game called Tycoon (or Daifugō.) This mini-game is a standout in the Thieves Den, letting you play with the cast of characters in a way that further lets you escape to this impeccably immersive world by creating a novel social environment. The only problem I have with Thieves Den is that the escapism could be even more potent if there was a multiplayer option — seeing notifications that “Ryuji entered the room” and seeing the multiple Tycoon tables strongly implies the possibility of online support — but maybe this is my own distorted desire. 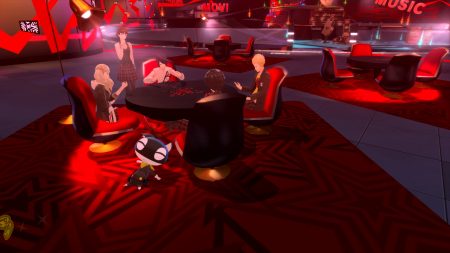 More ways to hang out!

The core of the changes lies in the third semester, which adds a whopping amount of playtime that can range from twenty to thirty hours. This epilogue adds a new Palace, new sub-quests in Mementos, and even a new Third Awakening scene for each Phantom Thief (if their confidant is of the highest rank at that point.) This massive chunk of content and its tons of surprises is, in and of itself, enough reason alone for the price of admission. Among many other changes too copious to mention, Persona 5 Royal will set the standard of how a re-release should be for a long, long time.

Persona 5 Royal is the crown jewel of the series. It expands and improves upon everything that made the original a powerhouse title in the first place. The new activities and confidants staggeringly stand out, and the numerous minor improvements subtly propel the game into a masterful league of its own. Roll out a scarlet carpet and hail the king of JRPGs.

Lorenzo is a 22 year-old Londoner and lounger. The mysticism of games criticism is his shield from any career that involves manual labor. Moreover, he wants to bring unique critical approaches to the realm of the Eighth Art. His favorite games include Red Dead Redemption and its sequel, Shadow of the Colossus, and The Last of Us.
Related Articles: Persona 5 Royal
Share
Tweet
Share
Submit