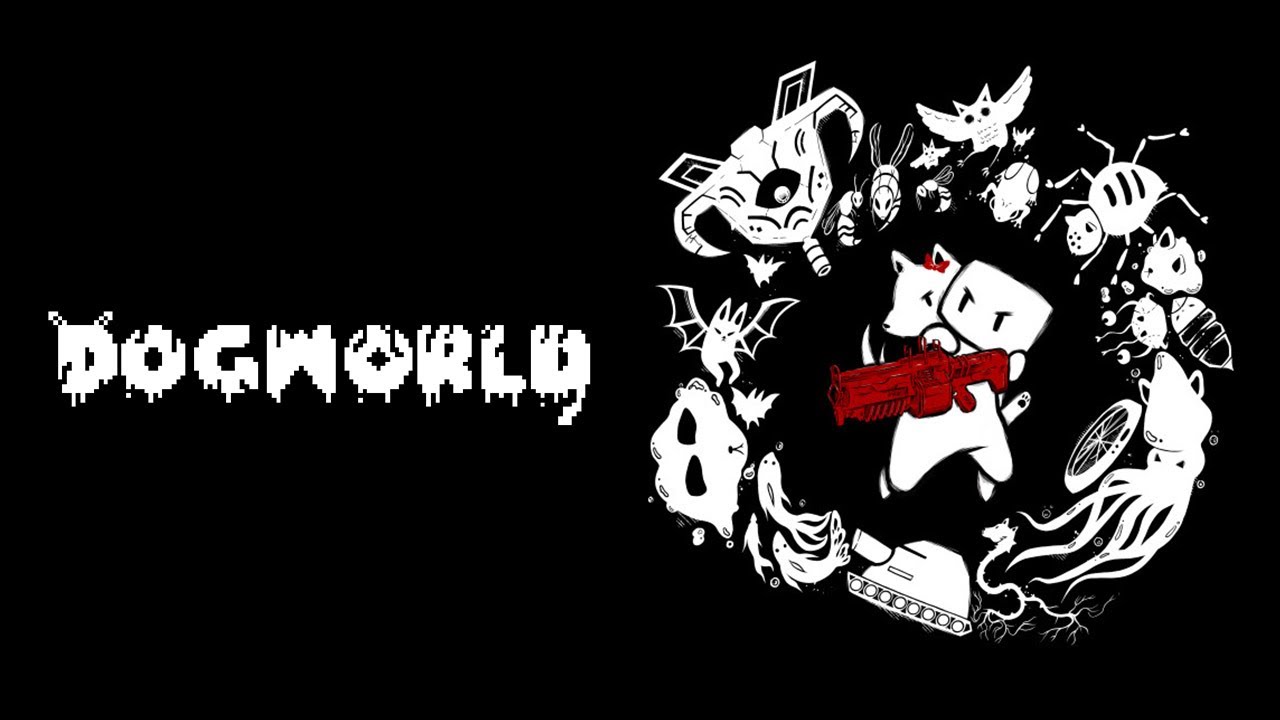 In a world where home consoles are pumping out graphical marvels in 4k resolution at up to 120fps and a good gaming PC able to fly the StarShip Enterprise I could understand some gamers having paws for thought upon seeing the 1bit art style presented in Dogworld, but wait! Turns out that you can indeed teach an old dog new tricks and this side-scrolling platforming run and gun affair from Lateralis offers a howling good time that you’d be barking mad to ignore.

Earth has suffered a catastrophic event which has forced what remains of humanity underground for safety, where they live securely tucked inside of environment-controlled egg-like pods, constantly watched over by an AI named Daddy who tells us that the surface is uninhabitable and we are safest if we stay down here beneath the surface in our snug little cocoons. Doesn’t sound hard to believe in current times but let’s not tempt fate…. Suddenly, an unexplained accident causes our pod to be ejected upward and smashed open leaving us exposed to the deadly atmosphere! So, it’s fair to say that our protagonist, named Boy, has been having a bit of a ruff morning of it all but to make matters worse it turns out that the surface is fine, the air is breathable, the climate is fair and there’s life everywhere… All of it being some type of dog!

Not long after taking our first steps on this previously forbidden surface, Daddy begins trying to bring Boy back below ground, for our well-being of course and it’s here that we meet Roxie, a talking dog who saves us from a trap and takes us back to her home in Dog Village, a place full of other talking dogs some of whom are not pleased with your arrival where others are pleased to see a human in town. From here we gradually get to know the various hounds and begin working together to uncover a deep conspiracy and put a stop to Daddy. 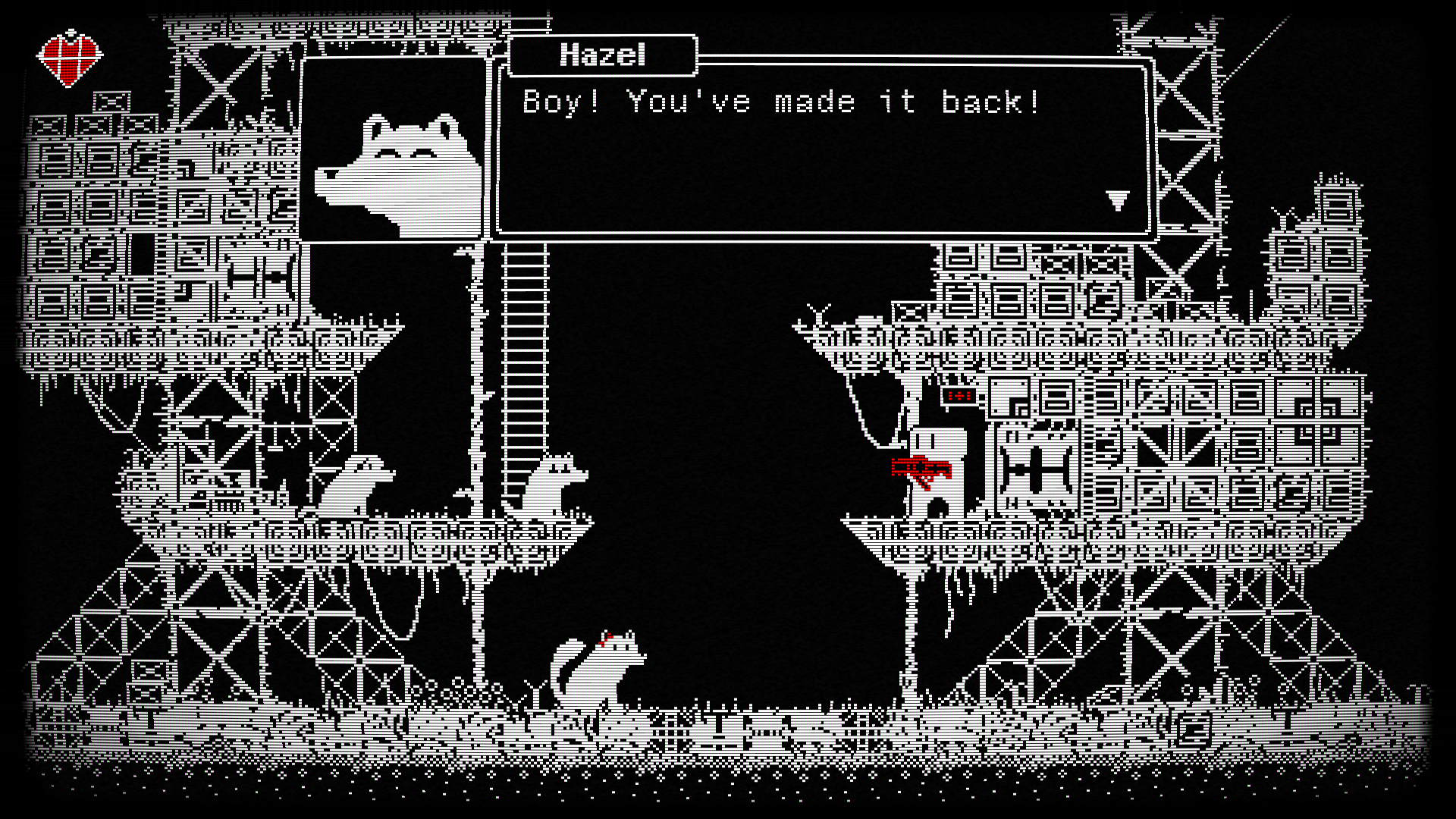 Given the somewhat limited scope of the 1bit art direction (which is using a whopping total of three colors) it speaks volumes to the writing at play here that all of the characters feel relatable and distinct from each other to the point where I actually wanted to go around talking to them all each-time I was back in Dog Village — finding out how they felt about events in the story since my last visit. There are many games much grander in scale where I just don’t care what nonsense the characters have to say but that wasn’t the case here. The same can be said for world-building and exposition elsewhere, much of which is delivered by computer log entries but occasional dialog with other characters. Sure, we’re not talking Shakespeare (Shakes-paw maybe?) here but it’s engaging enough that I wanted to know more and read the next bit of text throughout the game.

Gameplay from moment to moment, I won’t chase my tail here, it’s really slick. At the core of it, you just run, jump, slide and shoot but it all somehow adds up to more than the sum of its parts. Control is tight while movement feels natural and smooth, sliding gives you a temporary speed boost allowing you to jump further and avoid damage and makes traversing the environment seamless. Boy actually looks like a badass at times when you get a rhythm going especially when Dogworld throws some more complicated platforming or obstacles at him. Later we get a double jump and can use the shotgun recoil to remain airborne for longer, like rocket jumping in Quake. 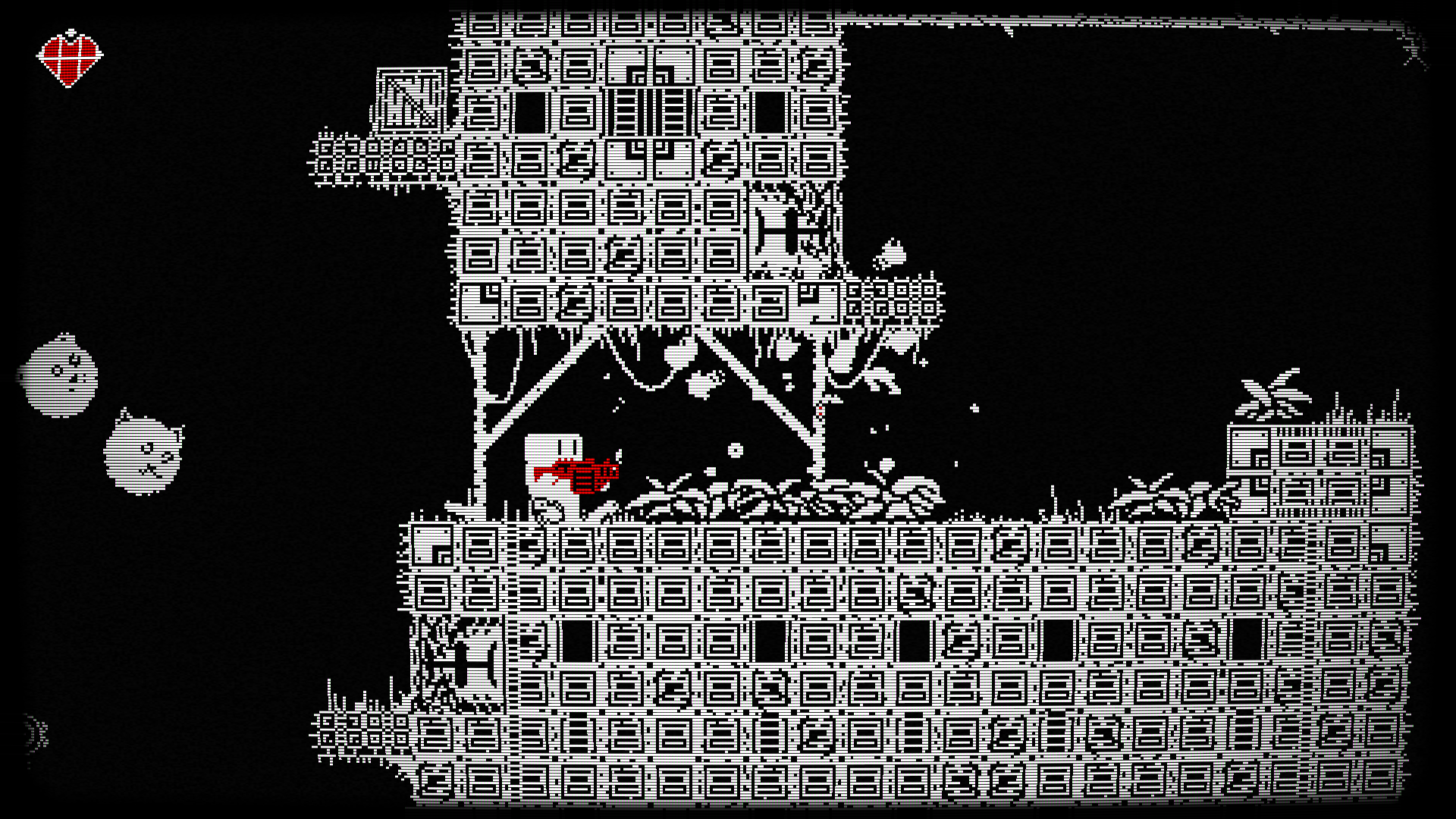 Dogworld offers a few different weapons as you progress through the game, all of which feel unique and distinct from the rest and some offer special features like the aforementioned shotgun recoil allowing more air time or enabling you to reach a higher ledge. The only real criticism I have is that the flamethrower weapon does make many enemies a bit of a pushover and could do with a nerf. But, aside from that, Dogworld makes good use of much of the arsenal on offer and allows a few weapon upgrades facilitated by one of the hounds back at Dog Village in exchange for scrap collected from fallen enemies.

Before I start to wrap things up here, I do want to bring particular attention to the soundtrack presented by Dogworld because it’s kind of awesome. It’s a fully original chiptune soundtrack that would not be at all out of place on some old school Game Boy DMG game cart and absolutely sets the tone and feel of Dogworld at every turn. It’s punchy, vibrant, and catchy and luckily has been made available for purchase by lateralis right here.

I really enjoyed Dogworld from start to finish. It isn’t a long game by any means but that works to its credit in my opinion, never dragging things out or overstaying its welcome. The 1bit art style manages to look detailed and clearly shows what it intends to without ever trying to do too much, while the audio and music is spot on as is the pace of action on offer, and is all paired with solid writing. Dogworld is made all the more impressive when considering that Nathan Haddock is the sole developer behind Lateralis!

Short but highly enjoyable, a well put together game that took classes at the old school. Great soundtrack, a round of ap-paws for Lateralis.

Grumpy gamer from UK with a keen interest in retro gaming and modding. Can also be found cycling up and down mountains, walking dogs, watching Sci-Fi and reading all sorts of books.
Related Articles: Dogworld
Share
Tweet
Share
Submit