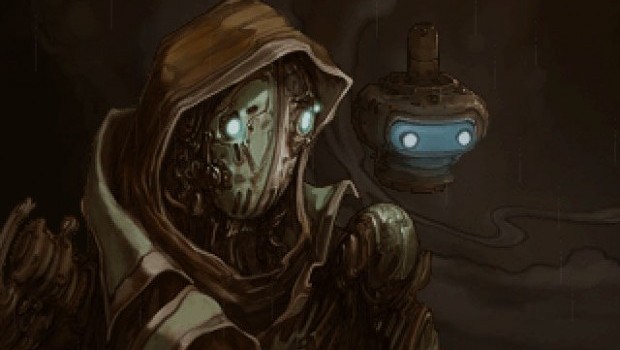 Wadjet Eye Games is frequently in the indie spotlight for their sci-fi love letters to the 1990s adventure game aesthetic. Gemini Rue and its spiritual successor Resonance proudly presented bleak storylines featuring satisfying twists and turns that generated a lot of discussion among fans about the reexamination of a long dead but nostalgic genre. Primordia was released by the same publisher along with Wormwood Studios right on the heels of these thematically impressive and experimental games, and received about as much press and attention as another Nancy Drew game. The early reviews were what Metacritic calls “mixed” and I didn’t play it for the longest time because I didn’t want to see Wadjet fail. A stagnating release schedule from the studio prompted me to finally take a look for better or for worse, and here’s what it has to offer.

Primordia presents a story in a world after humanity; it follows a simple robot mechanic who lives on the fringes of robot society. The mechanic’s reliable source of energy is pilfered by a scavenger who invites himself into the derelict ship he calls a home, shoots a few things, and leaves him with no way to recharge himself and a mission of revenge. As you progress through the various parts of the game you are exposed to the beautifully illustrated world that Primordia takes place in which applies science fantasy elements to apocalyptic scenery gorn. I’ll try to avoid spoilers as much as I can in this review because the slowly unfurling plot is perhaps the game’s greatest strength, but there’s plenty more to love.

[singlepic id=14569 w=320 h=240 float=left]The place I feel Primordia shines the brightest is in the depth of the world it presents. Progressing through the storyline, you find an incredibly fleshed out system of government, nomenclature, customs, curse words, and religion that the robots created when they were presented with a world where humans aren’t around to command them. The slow unfurling of the plot about Horatio Nullbuilt discovering he is more than the sum of his parts keeps giving way to more and more complexities of robot society that he wishes he could live without.

The deeper you dig into the social constructs of robot society, the more you find a loving consistency of the world that Wormwood Studios have created; it’s a winning example of making a world first and a story second which is a treat to experience in any media. Even some of the puzzles have nods in them to computing concepts such as the difficulty machines have finding the factors of prime numbers; little touches like this make Primordia even more of a treat to anybody who really understands machines. It’s so rare to see a game present somebody’s complex and fevered dream of the future in a way the player can understand without personally reading the game designer’s diary.

The gameplay and story hits the sweet spot between the relative safety of LucasArts’ method of granting you narrative invincibility and Sierra’s “figure it out” attitude of actually punishing you for bad decisions. While there’s no way to immediately die (that I encountered), how you solve some of the puzzles or your ability understand Primordia’s world will determine how happy your ending is. There’s also an easy way out of some of the more logistically difficult puzzles, but for those who work harder there’s a sweeter ending for your trouble. You have nobody but yourself to blame for say, destroying important information – consider yourself warned.

[singlepic id=14568 w=320 h=240 float=right]Ironically, Primordia has some technical issues. Specifically: some computers (depending on what passive programs you have running, such as your antivirus) will render Horatio’s walk cycle to be slow as molasses due to an issue with accessing the sound file for his footsteps. I spent a few hours checking forums and other sources of help which all pointed to a limitation of the engine used to create this title, but it’s the first time I’ve ever encountered this in a Wadjet Eye release and nobody wants to stop their antivirus to play a game.

Another complaint I have is more about living up to expectations but it’s still a valid one: Resonance pushed the envelope of the genre by adding an inventory of “ideas” to the usual collection of items and Gemini Rue added a combat system. Even The Shivah, also by Wadjet, had a rabbinical take on Monkey Island’s “insult swordfighting.” Primordia feels like a step backwards in terms of interactivity as it’s exactly what you would get in terms of gameplay from any other point and click adventure.

With a roster of games which excel in creating and sustaining an overwhelming mood that sucks you into the narrative, Primordia can’t quite make up its mind. It’s a game about a race of machines trying to slow their swift decline into rusty parts and there’s a chipper, wisecracking sidekick bot that follows you through the whole adventure. Sure your happy little helper bot comes in handy quite a few times but there’s some occasions when he really grates on the nerves. There are better ways to help brighten the mood of a dark and heady game than taking the often cloying “wisecracking buddy” approach.

[singlepic id=14567 w=320 h=240 float=left]A few common adventure game pratfalls are also present in Primordia. Some of the puzzles don’t make a lot of sense as to how the clue relates to the answer. A few of the challenges may be too advanced for more casual players or people not accustomed to logic puzzles. Puzzle solutions which feel as if they would be valid won’t work simply because the game says so. If you’re surging through the game with a strategy guide, the game can feel a little short. Still, one could argue that these are part of the genre, so I haven’t factored these complaints into my final score.

There is plenty to forgive Primordia for, but if you can get past the issues and lose yourself in the game there’s a rich and emotional story waiting for you. I’m a bit of a robot nut myself and despite all of my nitpicks about the game I found myself deeply affected by the ending. There’s a lot of reasons to fight Horatio’s war and Primordia does a great job of considering all of them even if it trips a few times on the way there. If you thoroughly enjoyed games like Beneath A Steel Sky or Full Throttle, I can guarantee that you’ll find plenty to like about Primordia.