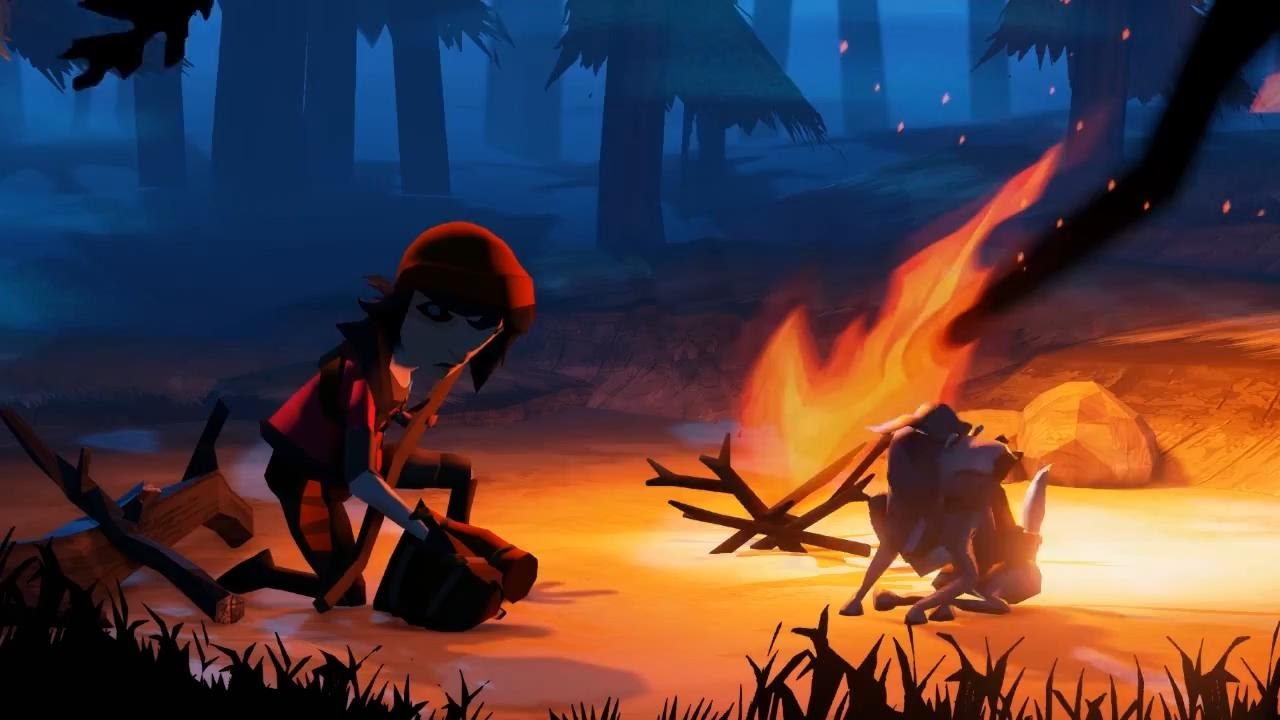 It’s a little hard to quantify The Flame in the Flood, and as a result, it’s hard to pin down exactly how I feel about it. At times I feel like this game is one of the most obtuse and randomly challenging adventures I’ve ever played, and at other times I feel like it’s a beating with no rhyme or reason. There’s nothing quite like it, and that makes it compelling. It doesn’t ask you to draw many conclusions, and that’s interesting in a way that few games achieve.

Upgrading your raft is critical to late-game survival.

The Flame in the Flood opens with your protagonist, an obtusely drawn woman named Scout, and her canine sidekick, Aesop. Scout and Aesop have to survive in a hostile, ever-changing world, using their wits, instincts, and the lessons learned through a great many deaths. The Flame in the Flood is a roguelike game, meaning each death furthers your adventure just a little bit more. Whether it’s learning that cattail reeds woven together makes rope, or figuring out that combining the resultant rope with a stick creates a snare that you could use to capture small animals, the game is as much about discovery as it is survival.

The biggest key in your arsenal is Aesop. He can sense danger, will bark and lead you towards supplies, and otherwise help you understand and explore your world. Your first attempt at the game will likely end with you dying of something like thirst, hunger, or a wolf attack. The next attempt you might have a better grip on how to get water, but you might end up sick as you didn’t think to run it through charcoal to make it safe. Your third run you might capture that rabbit, but once you have it you’ll have to figure out how to skin it and cook it. But to cook it, you’ll need fire. It’s pretty easy to see that The Flame in the Flood is also about the things we take for granted.

When you start the game you’ll have only a scant amount of recipes from which to craft items. You can, as an example, make a stone knife to give yourself something to cut things with. Upgrading to a stone axe requires that same knife, combined with a rag, a sapling, and some flint. On the other hand, using that knife in a different way, you could also craft arrows with saplings, flint, and feathers. When you have only a dozen slots of inventory, those simple decisions have a direct impact on what you craft and when. Intuition and practice are your friends, but that means a great deal of scavenging. When resources are scarce, decisions become harder, and there are moments when it feels like nothing you do will save your own hide. You’d figure that sort of trial and error would wear thin quickly…but it doesn’t. Every time you uncover something new, or make it just a little further down the river, the sense of accomplishment overrides and challenges you to press further next time.

Crafting — your feeble attempt to survive.

The contingent nature of each destination makes The Flame in the Flood relentlessly challenging. True to its roguelike roots, every time you put out to the river on your raft, you’ll encounter a completely random set of destinations. Within those destinations, the items are also unsystematic. In my first play, I found corn on the first island I visited, but I never saw it again on any subsequent attempts before I’d gone much further into my adventure. Each game is completely unique, and that’s part of the allure.

Beyond crafting survival items, you can also craft weapons and gear for Scout. Sixty-nine items await your discovery in the world, allowing you to combine and craft a great many items, including more than two dozen pieces of clothing, various teas to calm your stomach, penicillin, and various foods. But even having food can be dangerous. Finding mulberries in your pack offers a small bit of food and water to nourish Scout, but eating too many of them will leave you with an entire different gastrointestinal problem. Everything here is trying to kill you — even the food.

There are a total of ten regions to explore in The Flame in the Flood (outside of the endless game mode), each more treacherous than the last. While the first few areas aren’t overly threatening (though, this game is random, so sometimes you’ll find new ways to die even early on), you’ll soon have to worry about rain, cold, poison ivy, animal bites and scratches, and worse. Time zips by faster than you’d like, granting a powerful appetite and a need to drink all of the brackish water all around your raft. With only a few slots in your backpack, it’s obviously hard to have enough to craft anything of use. To that end, Aesop can carry a few items, and you can store quite a bit more on your raft.

Aesop has incredible balance on that raft…

Upon your eventual death, you’ll be given a map-view look at just how far you made it, where you stopped along the way, and what your cause of death was. You can also restore a checkpoint that appears as you fling yourself down the river, though you may be in dire straights at that point as well, leaving you to back up even further. To help you through your adventure, however, you have one thing that persists — Aesop’s bags. Even if you start a new game, anything you’ve put in Aesop’s bag persists to your next attempt. This could give you a leg up on the many elements of this game out to cause you bodily harm. The items in your own bag, and on the raft, however, are lost.

It’s very easy to boil The Flame in the Flood down to a series of levers, after a fashion. Scout, despite her obtuse and unique look can easily be reduced to a group of stats that have to be managed on an ad hoc basis. Aesop is your capable mobile storage chest and audible alarm. Your raft is a grinder that can eat your resources if you fail to make routine dexterity checks while steering. Even the environment is a randomized sink against those levers that must be managed with shelter or semi-planned upgrade paths. Much of the gameplay can be classified as “dying until you understand” and old-fashioned luck. Once you’ve uncovered the mystery of what you need at each segment of the journey, you’ll store it in Aesop’s bags for your next death. Everything after that point is simply a roll of the invisible dice that hides in the background.

You might even meet a new friend. Well, maybe. That IS a rifle, after all.

I have a very strange caveat to the review of this travelling survival game — I’ve never beaten it. Perhaps I’ve been unlucky with my roguelike dice rolls, or maybe I need to learn a few more survival tricks, but the point remains the same: I’ve died a lot and haven’t managed to clear all ten areas. With the scarcity of resources, and a frustratingly small backpack, I never seem to have the right thing for my current predicament. I died of parasites at one point, so I stored up tea to solve that problem. I was more careful, so I ended up dying with a pack of tea and no parasites. I forgoed the tea next time but got killed by a wolf. Now I had to balance the paltry dozen spots against gathering pelts for clothes, food for my belly, and various utility items to snare game. I ended up with poison ivy and starved to death. The river is swift, but for me it always seems to end the same way — death. I look forward to seeing some fan-made strategies so I can experience the rest of what the game has to offer.

The Flame in the Flood

There are times that The Flame in the Flood feels like the world is against you. And it is. But that’s the mechanic you are dealing with here. You will die, a lot. If that runs counter to what you find fun, this game might not be for you. But if you’d like to try something entirely unique, look no further.

Ron Burke is the Editor in Chief for Gaming Trend. Currently living in Fort Worth, Texas, Ron is an old-school gamer who enjoys CRPGs, action/adventure, platformers, music games, and has recently gotten into tabletop gaming. Ron is also a fourth degree black belt, with a Master's rank in Matsumura Seito Shōrin-ryū, Moo Duk Kwan Tang Soo Do, Universal Tang Soo Do Alliance, and International Tang Soo Do Federation. He also holds ranks in several other styles in his search to be a well-rounded fighter. Ron has been married to Gaming Trend Editor, Laura Burke, for 21 years. They have three dogs - Pazuzu (Irish Terrier), Atë, and Calliope (both Australian Kelpie/Pit Bull mixes).
Related Articles: The Flame in the Flood
Share
Tweet
Share
Submit