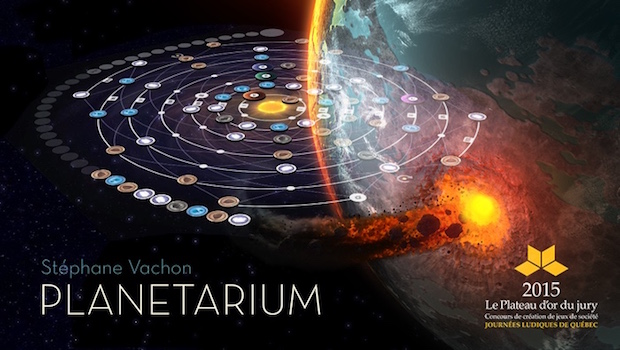 Many kids’ first experience with the wonders of the galaxy came from the inside of an inflatable dome that filled school gymnasiums. There was something magical about seeing those tiny lights projected around a sphere depicting galaxies, stars, and planets. Those special convocations were meant to fascinate young minds about the expansive cosmos. Game Salute’s Planetarium looks to invoke that imagery with a game that leans more toward hard science rather than science fiction.

There’s little doubt to the game’s theme as you open it. The game board represents a solar system, and to begin the game you lay out chits of rock, metal, gas, and water along layers of orbits that circle a central star. The cards you’ll use are wonderfully illustrated and boast an array of heavenly bodies covered in ice, lava, gas, and so forth. Even the box itself has a world being bombarded by a meteorite. The presentation feels straight out of BBC documentary, but those concerned with the academic theme should rest assured that the game is actually easy to learn.

Matter is collected as it collides with planets, helping the player gain victory points and the planets gain form.

Your goal is to collect matter that matches up with the cards you are dealt at the start of the game. Cards are separated into three categories: early, late, and final evolution. Early and late evolution cards score victory points once you’ve collected the required matter, while final evolution cards are not played until the final turn.

Matter is collected to your player board. Your board is divided into four sections lettered A to D with a corresponding planet for each letter laid among the matter that populates the game board. Each turn, you move a piece of matter or any planet one space and collect the matter that collides with a planet. Collected matter is placed in the section matching the planet that collided with it.

There may be nothing unique about the basic set collection, but thankfully, the opening rounds are just one act of the full play. As card sets are completed, the matter used is placed on a track that serves as the game’s timer. The completed cards are then lined up along the board beside the letter of the planet they came from. Planets then take shape based on the types of cards that are lined up. Cards can help a planet become hospitable or hostile depending on which has the highest point value of cards. For example, if planet B has tidal forces, which is worth eight hospitable points, and asteroid impact, which is worth three inhabitable points, the net difference is five toward hospitable. Planet B would be a hospitable planet for that moment. A planet’s living conditions can be very volatile as a single card play can sway the balance from one extreme to the other.

When the matter on the left of the card has been collected, cards can be scored and laid out to show a planet’s evolution.

As the track nears the end of the game, the game becomes a little more frantic. Planets and matter now move a little faster, and you need to keep a watchful eye on your final evolution cards. These cards only score at the end of the game when the timing track is full and can only be played on planets that your cards help create. Final evolution cards are based on the types of planets that have been created throughout play as well as how close that planet’s orbit is to the sun. For example, to play a molten inferno, a planet must be inhospitable and end up in the closest orbit to the sun while an ocean planet must be hospitable and be in the third, fourth, or fifth orbit. Once final evolution cards are scored, the player with the most victory points wins the game.

If the game begins slow down, it is in the waning stages when players are jockeying the planets into the right position for final evolution. Since you can’t play final evolution cards till the last turn, players may stall near the end trying to get planets in the perfect positions. This could prolong the end game, but luckily the game’s pace keeps downtime to a minimum otherwise.

Planetarium is a great science game. The building of planets adds a fantastic layer to the game and forces you to keep an eye on what other players are doing. It also keeps your focus on all four planets since playing at least one card on each keeps your options open for the final evolution stage. Since planets can form different ways with each play, the game has solid replay value.

Planetarium is the definition of a game that gives you god-like powers. It’s great fun to crash planets and matter about and see planets form as more and more sets are collected. The game may not be revolutionary in terms of mechanics, but it’s entertaining. The artwork is phenomenal, and the final evolution stage adds some great strategy. This will be great for those interested in science or for anyone looking for something different from the science fiction genre.