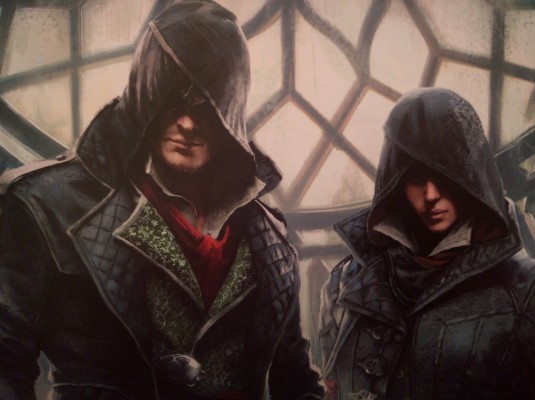 We all wanted Japan, but Ubisoft wanted to make another trip to Europe for a pivotal event in modern history — the Industrial Revolution. In the period between 1760 and 1840, everything changed. It sounds hyperbolic, but it couldn’t be more true. The basis for manufacturing of goods moved from artisanal and handmade to mass-produced and efficient. Beautiful filigree and artifice married with an emerging modern artistry to create some of the most enduring and beautiful pieces of architecture the world has ever known. It was also a one of the darkest and most violent periods in history, culminating in a war that engulfed the world. While Samurai in feudal Japan would have been a great turn for the series, there is certainly a story worth telling in London.

Paul Davies, the author behind The Art of Watch_Dogs and The Art of Assassin’s Creed Unity returns to pen The Art of Assassin’s Creed Syndicate. Syndicate tells the story of Jacob and Evie Frye, twins Assassins from London. Ubisoft, after closing the story in Unity, went back to basics with Syndicate, leaning on the age-old conflict between the Templars and Assassin brotherhood. Raised on the streets, both Evie and Jacob represent the rising tide of the Victorian age. Fashion, technology, attitudes — everything was fluid and in motion.

Jacob and Evie Frye — your co-protagonists.

The book kicks off with a foreword by Thierry Dansereau, Art Director at Ubisoft Quebec. In it he discusses his inspiration for the art direction in Syndicate — the diametrically opposed opulence of the time set against a backdrop of abject poverty, debauchery, and the rise of industrial pollution. It was also the start of what we might call the “dapper gentleman” look. Top hat, cane, capes, and ruffled shirts — if it sounds like I’m describing Jack the Ripper, you are also correct. While most people look back at this time in history with rose colored glasses, it may have been the toughest period in modern history.

The many looks of Jacob Frye.

The Art of Assassin’s Creed Syndicate showcases the fantastic concept artwork for the main characters of the game, naturally, but it also showcases a great deal of the environments of the time. Westminster, Buckingham Palace, Southwark, Lambeth, Piccadilly Circus, Lambeth and other well-known locations are equal parts gorgeous and gritty. Unlike previous games, there is much cleaner reference materials in the forms of the artwork of the time, filling in the detail that would otherwise have to come from the imaginations of the art team. It’s exciting to climb the towers of Whitechapel, dodge the giant gears inside Big Ben, and ride atop some of the very first steam-powered locomotives.

The Industrial Revolution was the rise of the firearm.

While I paged through the 191 pages of the hardcover and looking at the artwork, I was struck by how fast the book disappeared from my hands when my wife spotted the Alhambra Theatre and its world-famous Venetian masquerade full-face masks. Book back in hand, the 13 chapters of the book give a fantastic view into the environment of the time. A thick haze hangs in the air over wet and crowded streets. Chapter 5 showcases the people of London, but also gives a cross section of the incredible artwork for the faces of London’s citizenry. The fidelity here is incredible, capturing a lifelike realism that brings the characters in the game to life. The remainder of that chapter gives way to pencil sketches that demonstrates the movement style the Ubisoft Quebec team looked to capture in Syndicate.

If I had to pick a favorite concept art piece, it has to be the section on the Bank of England. The level of detail here is absolutely magnificent. There are also two triple-panel foldouts in the book — one showcasing the role of carriages in the game, and another with Jacob Frye overlooking the docks of the River Thames. The second is a rougher painting look, and the first is more refined and detailed, but they are both a welcome addition to the Titan Books formula for their art books.

The Art of Assassin's Creed Syndicate

All in all, The Art of Assassin’s Creed Syndicate might not be as rooted in fantasy as the previous titles, but it doesn’t change the fact that Ubisoft’s artwork is simply incredible. If you are a fan of the game, or just a fan of gorgeous concept art, this book continues a string of amazing collections from Titan Books.

Ron Burke is the Editor in Chief for Gaming Trend. Currently living in Fort Worth, Texas, Ron is an old-school gamer who enjoys CRPGs, action/adventure, platformers, music games, and has recently gotten into tabletop gaming. Ron is also a fourth degree black belt, with a Master's rank in Matsumura Seito Shōrin-ryū, Moo Duk Kwan Tang Soo Do, Universal Tang Soo Do Alliance, and International Tang Soo Do Federation. He also holds ranks in several other styles in his search to be a well-rounded fighter. Ron has been married to Gaming Trend Editor, Laura Burke, for 21 years. They have three dogs - Pazuzu (Irish Terrier), Atë, and Calliope (both Australian Kelpie/Pit Bull mixes).
Related Articles: The Art of Assassin's Creed Syndicate
Share
Tweet
Share
Submit